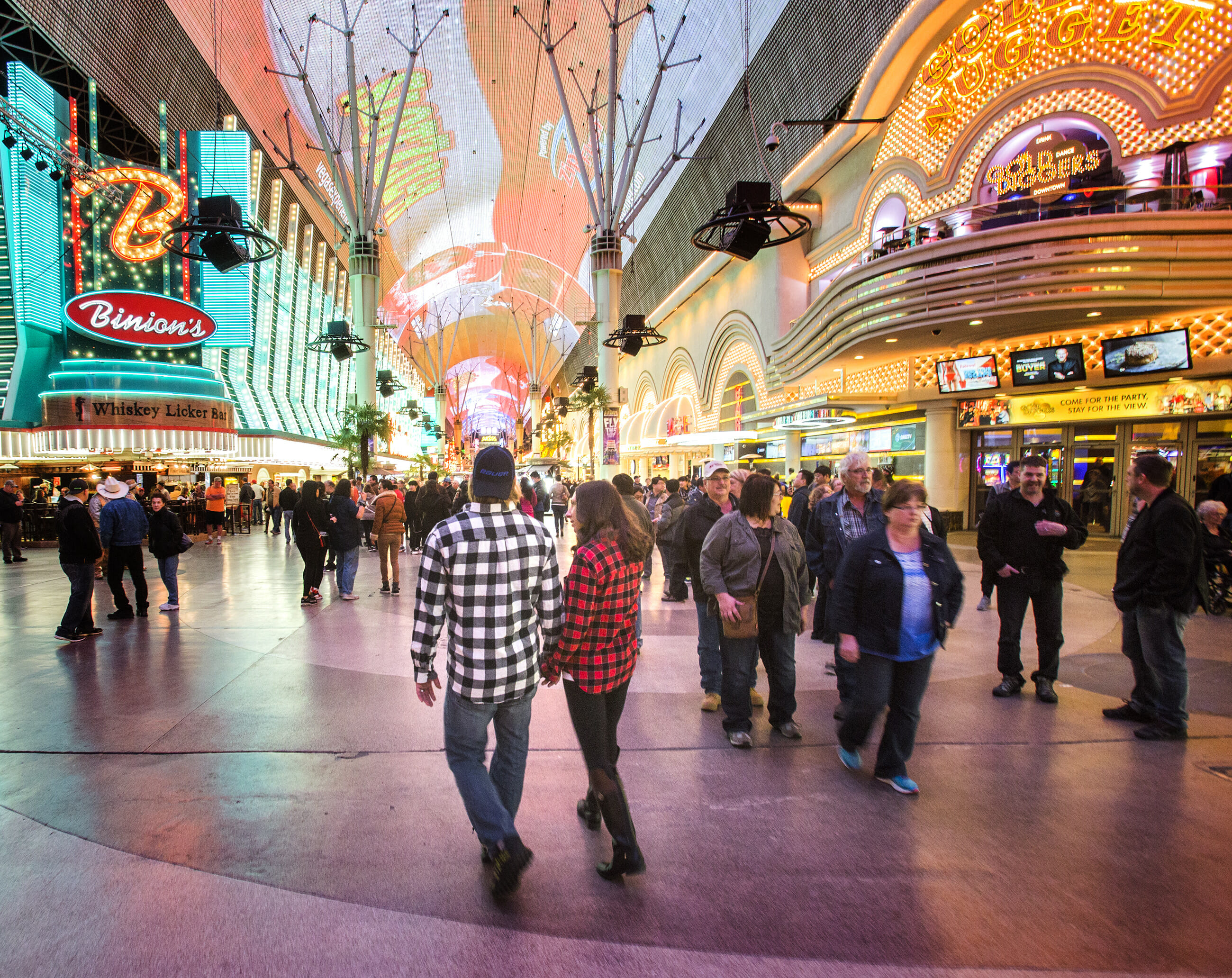 Analysts cautioned that construction of Circa Casino Resort in downtown Las Vegas would disrupt the market’s gaming results in 2019. Gaming insiders said redevelopment of the Interstate 15-U.S. Highway 95 interchange – part of the Department of Transportation’s Project Neon – would impede downtown visitation throughout the year.

So much for prognostications.

Downtown casinos flourished in 2019 with the market’s highest 12-month gaming revenue total in 26 years coupled with a slight increase in hotel room occupancy. Early results foreshadow another positive year on the horizon; however any visitation slowdown over coronavirus concerns could soften the results.

Meanwhile, casino leaders said non-gaming developments such as dining, entertainment and residential in various downtown pockets, such as the Arts District, East Fremont, and the Symphony Park area surrounding the Smith Center for Performing Arts, will provide a steady stream of customers to downtown gaming properties.

“People want to come to a downtown area to visit and to also live in an area that’s vibrant and offers so much to do and see,” Stevens said.

“Downtown is a value-oriented market that has a certain authenticity factor,” said Smith, whose company has operated downtown since 1975, starting with the California Hotel Casino. Boyd Gaming added two more downtown resorts over time, Fremont and Main Street Station.

“I don’t think you can find anything more authentic than downtown Las Vegas,” he added.

Smith, and other downtown casino leaders, aren’t fearful of Circa syphoning away business. Instead, the view the new resort as an attraction that will bring additional visitation downtown.

“(The market) excels in understanding its customers and offering them an experience that they expect and is delivered by the various operators in the area,” Bussmann said. “Some places in the market have priced out this group of visitors with additional fees.  It is important that Vegas continues to offer an affordable experience to its guests."

‘There is a lot of energy’

In 2019, downtown casinos recorded the market’s best gaming revenue performance since 1993, collecting $684.9 million in pre-tax gaming win from customers, an increase of 5.4 percent over 2018.

Casinos followed up the annual figure with a 13.47 percent gaming revenue increase in January, according to the Gaming Control Board.

Downtown’s largest gaming revenue year was in 1992, when casinos collected $703 million. Over the next two decades, casino expansion on the Strip and the Las Vegas locals market, expansion of legal gaming in other states and the Great Recession combined to send downtown to 25-year gaming revenue low of $493.4 million in 2010.

He acknowledged the initial efforts by Zappos founder Tony Hsieh. He moved his company’s campus into the former City Hall building on Stewart Avenue and funded the Downtown Project, which brought technology startup’s the area. The endeavor fueled high-rise residential development and attracted trendy restaurant growth.

Stevens and he and Hsieh “hit it off” a few years ago, actually sending customers to each other’s businesses, the first such pairing between East Fremont and the casinos.

The Las Vegas Convention and Visitors Authority includes downtown visitation numbers in the agency’s overall monthly and annual visitor volume reports but found through research that at least half of all Southern Nevada tourists visit downtown.

According to the most recent visitor profile, 54 percent of tourists said they went downtown to see the Fremont Street Experience, whose LED screen canopy underwent a $32 million renovation last year. Another 17 percent said they came downtown to sightsee and visit the casinos.

Bussmann said downtown resurgence is partly because of the reinvestment into the gaming properties.

“From the Fremont Street Experience upgrades to the continued reinvestment by various operators, it is great to see this segment of the market grow as it continues to show value to its customers,” Bussmann said.

Fifth Street Gaming CEO Seth Schorr, chairman of Downtown Grand, said development in downtown started outside the casino corridor more than a decade ago. In the past few years there has been a convergence between the East Fremont area, with its bars and restaurants, and the Fremont Street casinos.

“What’s been important is the new types of businesses helped change the brand positioning of downtown,” said Schorr, whose company owns Evil Pie restaurant on East Fremont. “At Downtown Grand, we created an experience that compliments and blends in with other parts of downtown.”

Schorr said Stevens, who converted the former Fitzgerald’s into the D and expanded the Golden Gate, and the Tamares Group, which renovated the Plaza, brought “significant investment and unique offerings” to downtown.

Stevens also created the Downtown Events Center on a site that once housed the Clark County Courthouse. The three-acre open air space hosts concerts, live sporting events and watch parties for televised events, such as the Super Bowl.

Las Vegas Mayor Carolyn Goodman credits casino operators with growing their customer base, which allowed new businesses to enter the picture. Goodman said the casinos are bringing more variety and newer amenities that will attract both visitors and locals while creating an environment that foster new non-gaming projects that enhance the overall downtown picture.

“Downtown reflects how gaming and our businesses are working shoulder to shoulder to create an area of excitement,” Goodman said.

Houston-based billionaire Tilman Fertitta acquired the Golden Nugget Las Vegas in 2005 – along with the Golden Nugget in Laughlin – for $325 million. He began a three-phase, $320 million expansion and renovation of the downtown property, that concluded in 2009 with the opening of a 500-room hotel tower, giving the resort 2,419 rooms, the most in downtown.

Now, with Circa and Downtown Grand on the way, Smith said Boyd Gaming is considering “what the right project is” for its land behind the Fremont. He said the market “needs additional room capacity” but the company wants to see how the new rooms fill the void.

“If you think back to this revitalization, it’s been a very thoughtful effort in what’s been added to attract the changing customer,” Smith said. “There is a lot of confidence now in the market.”

Stevens is building downtown’s first ground-up hotel-casino in 40 years. The last was his now D Las Vegas, which opened as the Sundance and was built by the late mobster-turned-community philanthropist Moe Dalitz.

Circa will open with more than 500 rooms and will include such amenities as an expansive fifth-floor pool deck, a three-story race and sportsbook, and a street-level outdoor bar that will run the property’s length along Fremont Street. Stevens acquired and cleared the city block that housed the shuttered Las Vegas Club, the small Mermaids casino and the Glitter Gulch strip club.

Downtown’s 2019 gaming numbers also benefited from Golden Entertainment’s $140 million renovation and rebranding of the former Stratosphere into the Strat. The property sits on Las Vegas Boulevard, just north of Sahara Avenue, and is included in the downtown area by state gaming regulators.

In an interview, Goodman highlighted numerous projects throughout the downtown corridor.  She also touted the downtown area as a center for government and law and cultural activities.

Ground was broken last year on the first residential development at Symphony Park (six acres), which is expected to open next year. Auric Symphony Park will offer 324 for-lease apartments ranging from studios to two bedrooms, as well as roughly 15,000 square feet of ground level and retail restaurant space. The 480,000-square-foot complex is set to feature a resort-style pool, rooftop bar, lounge and pet park.

Redevelopment of the Cashman Field complex, which would include renovating convention space and converting the stadium into a space to house a Major League Soccer franchise has been her long-standing goals.

Goodman credits Stevens as an example of someone willing to make a bet on the city.

“Derek reminds you that the folks downtown are willing to put their money on the table to get things done,” she said.