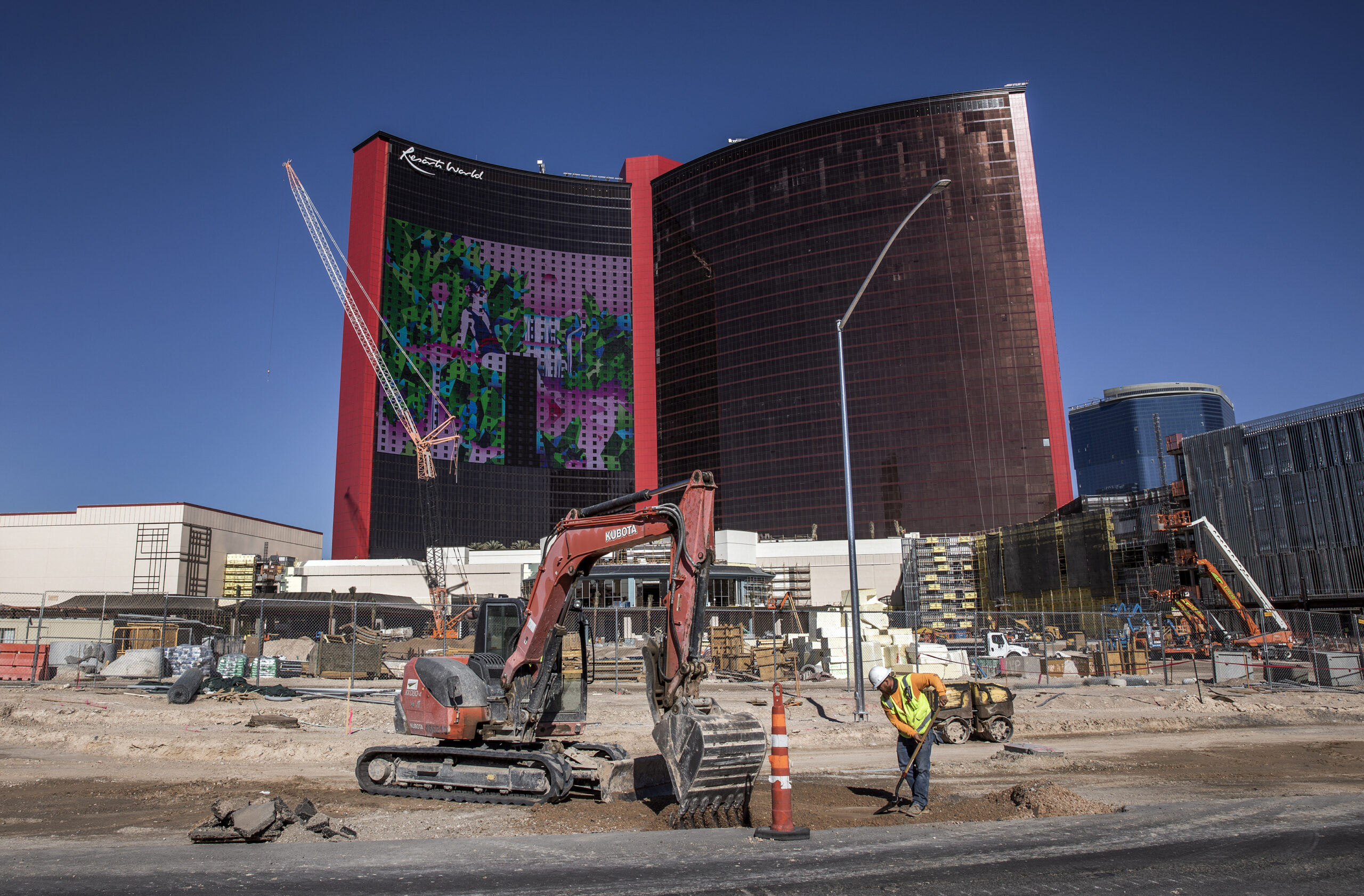 By now, the Great Recession’s effect on Nevada seems like a tale as old as time. The financial crisis and burst housing bubble brought construction to a halt, littering the Las Vegas region with half-finished projects.

Before then, Clark County hummed with building activity as homes multiplied in the desert, casinos sprouted on and off the Las Vegas Strip and shopping centers sprang up in suburban locales. In 2006, the construction industry accounted for 1 in 9 jobs in Nevada.

In the years that followed, construction jobs increased once again, but there was a noticeable difference: They never matched that 2006 peak despite big-ticket items such as Allegiant Stadium, Resorts World and Circa Las Vegas.

Now, economists say that characteristic of the industry’s post-recession rebound may prove crucial as the state weathers the effects of the pandemic. As of October, construction made up 7.3 percent of the state’s jobs, or roughly 1 in 14.

“This is not an overinflated sector,” said David Schmidt, chief economist for the Nevada Department of Employment, Training and Rehabilitation. “It’s actually at a pretty normal place right now.”

Construction was one of the few industries exempt from coronavirus-related shutdowns this year. Gov. Steve Sisolak declared construction essential alongside other sectors such as health care, public transportation and mail delivery. That move alone helped spare the building trades from some of the mass layoffs experienced by service-providing industries.

But the construction industry wasn’t completely unscathed. Construction jobs — which include commercial, residential and public works projects — numbered 103,300 statewide in March. That tally fell to 93,400 by September, largely pulled down by a dip in the Las Vegas metropolitan area. Construction jobs climbed back to 95,700 by October, which is down 2 percent compared with a year earlier, according to seasonally adjusted employment data from the U.S. Bureau of Labor Statistics.

The construction decrease, however, was noticeably slimmer than what several industries experienced during that same one-year period: Jobs were down 14.2 percent in leisure and hospitality, 14 percent in the information sector and 9.8 percent in professional and business services.

The mining industry proved to be the only real winner in Nevada, with a 10.8 percent increase in jobs. But from a jobs standpoint, the state’s mining industry is about one-eighth the size of the construction sector.

William Stanley, executive secretary-treasurer of the Southern Nevada Building and Construction Trades Council, said construction employment numbers have been an encouraging sign amid the pandemic.

“It’s important for folks to understand that the construction industry through all of this has been one of the bright spots in a really downer economy and has really sustained the state in a lot of ways,” he said.

That occurred even with construction activity wrapping up at Allegiant Stadium, which has employed thousands of workers throughout the building process. In late September, the newly christened Las Vegas Raiders played their first game — albeit one without fans — at the nearly $2 billion stadium.

With other construction projections ongoing or in the pipeline, Stanley said he remains “cautiously optimistic” the industry won’t endure any major setbacks. As an example, he pointed to the MSG Sphere project at the Venetian, a planned 18,000-seat entertainment venue. While construction slowed during the pandemic, it hasn’t stopped and Stanley said there’s no indication from developers that it will.

A construction bulletin from the Las Vegas Convention and Visitors Authority also shows a number of projects underway or planned in the coming few years. Among them: Virgin Hotels Las Vegas (set to open in January), a concourse renovation at McCarran International Airport, a pedestrian overpass and several new hotels in or around the resort corridor.

“Capital doesn’t seem to be withdrawing, which would be a major concern,” Stanley said. “That’s what happened after the 2008 debacle.”

Potts, whose mission is economic development, sees another path forward for the construction industry. From an employment standpoint, he said, the Reno metropolitan area is faring better than Las Vegas because it has a more diversified economy. Potts said GOED wants to “strategically bring everybody together” in Southern Nevada — commissioners, business leaders, commercial real estate brokers, water districts, utility companies and the Las Vegas Global Economic Alliance, among others — to discuss infrastructure development that could enable more diversification in the region.

Potts named the buildout of the Apex Industrial Park, the Harry Reid Research and Technology Park and land near Jean as development opportunities that would rely on infrastructure improvements.

Plus, a site selection survey used by GOED lists “transportation infrastructure” as the second most important consideration for companies choosing a location, behind only “workforce skills.”

Ultimately, that ties back to construction because if a region doesn’t offer that infrastructure, “companies will pass you by,” Potts said. “So we have an opportunity to build and we know what companies are looking for. This list is right in front of us.”

And, unlike the leadup to the Great Recession, housing construction in Nevada appears based on demand rather than speculative building, Schmidt, the DETR economist, said. That’s a safeguard for the construction industry as well moving forward.

“We also don't have that huge overhang of jobs that's completely reliant on building and flipping homes,” he said. “Instead, it’s the growth that we need to help have the infrastructure that we need to support our more broadly growing economy.”