Effort to recognize Indigenous Peoples’ Day advances in one rural county, stalls in another 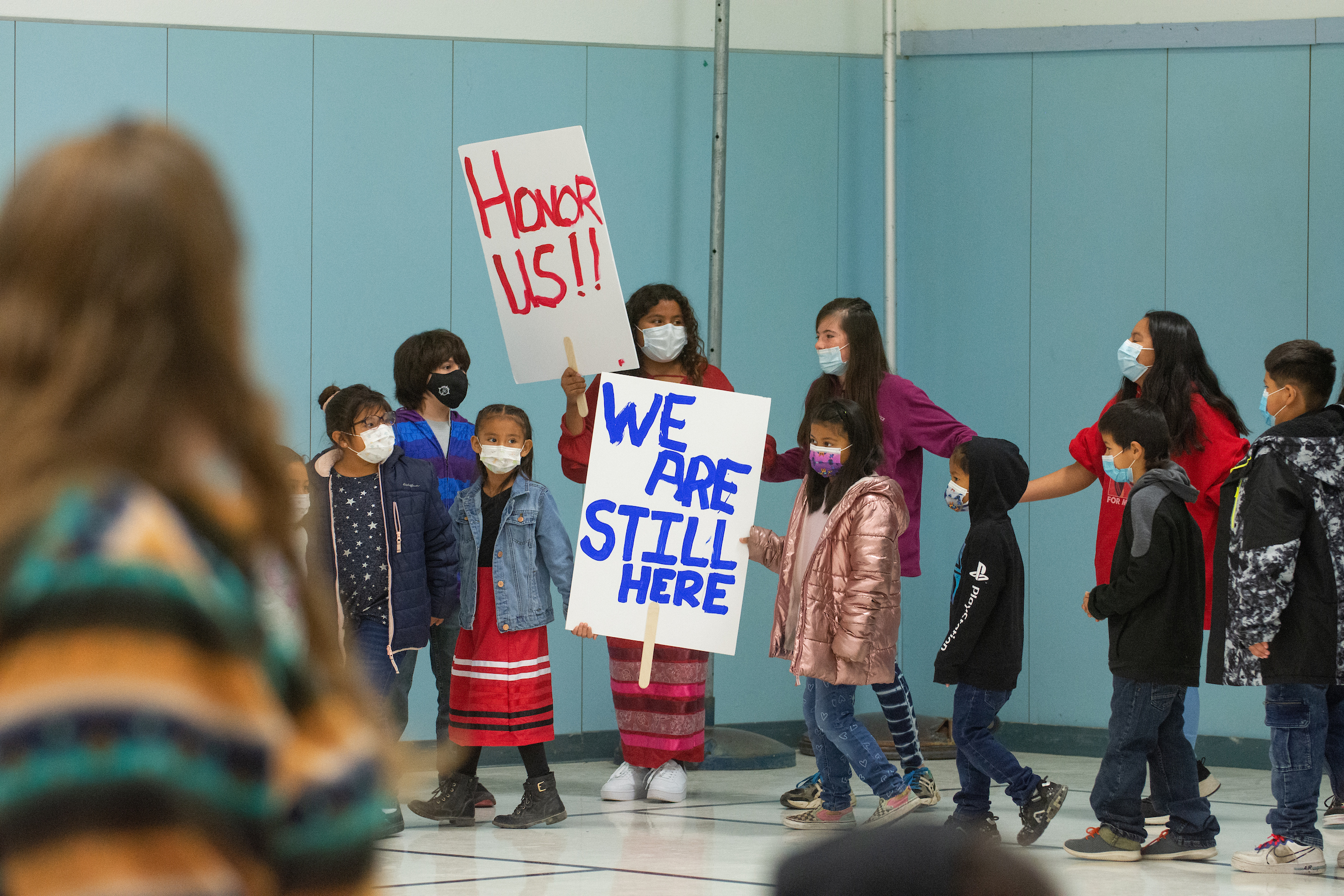 In the past, the Western Nevada county, where a portion of the Walker River Paiute Tribe’s reservation is located, has only celebrated Columbus Day on the second Monday of October. But this year the rural county joins the state’s urban centers in declaring the day to honor its Paiute community, furthering a trend to recognize the people native to this land rather than focus the holiday solely on an explorer who sparked the colonization that led to their oppression.

“We are your neighbor, in good standing, just 30 miles from you,” Torres told the commissioners during their Wednesday meeting. “Our children attend your school, our members live and work in your community, and we collaborate and support the efforts of Mineral County. We feel we are, too, Mineral County, although we run our own sovereign nation. It is time to acknowledge the First Nations peoples that were here when Columbus arrived.”

More than a dozen states and cities, including Nevada, Reno and Las Vegas, have chosen to honor Native Americans on the federal holiday celebrating explorer Christopher Columbus as the person who discovered the Americas, despite the fact that Indigenous people had been living across the continent for tens of thousands of years, if not more. Columbus Day has been a holiday since 1934, when it was approved by then-President Franklin D. Roosevelt.

The Biden administration this year became the first to proclaim Indigenous Peoples’ Day.

A law approved in 2017 by then-Gov. Brian Sandoval established an annual Indigenous Peoples’ Day on August 9. But tribal leaders and members argued that recognition in August didn’t go far enough to educate the public about the ways colonization affected Native American people in the Great Basin. As a result, organizers have increasingly turned to local governments to ensure that Indigenous Peoples’ Day is recognized on Columbus Day.

Even as the state’s urban areas have increasingly recognized Indigenous Peoples’ Day on the second Monday of October, with resolutions and by hosting public events, some tribal leaders have struggled to get rural county governments to do the same.

“This was the right thing to do to support our friends and neighbors in their mission to acknowledge, educate, and celebrate their history and culture,” Hall wrote in an email to The Nevada Independent. “Our decision today made no mention of doing away with Columbus Day and people’s right to commemorate that should they choose to do so.”

Torres said she felt “very appreciative” that the county moved forward with the proclamation.

Torres had also requested that the Churchill County Board of Commissioners consider a similar proclamation, but said the board denied her request to make a presentation.

The Nevada Independent did not receive responses after reaching out to all Churchill County commissioners  for comment last week.

The situation in Lyon County and Churchill County shows that Nevada Native communities still face barriers in getting some rural counties to recognize Indigenous Peoples’ Day.

A resolution that Lyon County Commissioner Wes Henderson presented on Thursday would have proclaimed Monday Indigenous Peoples’ Day. It also encouraged other businesses, organizations and public institutions to do the same. Additionally, his proposed resolution  recognized the county as the original homeland of the Paiute and Shoshone people in the region, and it noted a community responsibility to recognize them.

But Lyon County Board Chair Vida Keller presented a secondary option that removed most of the material content from Henderson’s original resolution. Keller said that she had a problem with declaring Indigenous Peoples’ Day on Columbus Day, making comments at the meeting that Torres, the chair of the Walker River Paiute Tribe, said she found offensive.

“Are we trying to change history?” Keller said. “Are we trying to put another layer over history? … When I read the first resolution, I will be absolutely honest, I took it personal. I am part Native American — don't let the blue eyes, blonde hair and pale skin fool you.”

Keller provided no further information about her heritage and did not respond to an inquiry from The Nevada Independent on Thursday about that and which tribe she is an enrolled citizen of.

“When you live and breathe American Indian heritage, culture, values, if you really are of Native American descent, you would understand and know the history behind Columbus and things that he did to our Indigenous people,” Torres said in response to Keller’s comments. “They would understand the significance of why changing the day is so important to us.”

Henderson proposed combining the two proposals as a compromise, while maintaining the proclamation of Indigenous Peoples’ Day on Monday. The other commissioners expressed more willingness to vote in favor of the compromise, calling the original proposal “divisive” and saying they thought it went too far. Still, the board decided to postpone its decision.

“I don't want to see us do it on Columbus Day,” Commissioner Ken Gray said during the meeting. “I'm not saying Columbus was a great man; he was a great explorer. Lots of people have done great things in our society, in our history, that didn't turn out to be very nice people. However, that does not demean what he did on behalf of the old world.”

After the board decided to take up the issue on a later date, Henderson told The Nevada Independent in an email on Thursday that he was disappointed in the decision.

“I feel that it would be more appropriate to [celebrate Indigenous Peoples’ Day] in October and specifically the second Monday of the month,” he said. “While [Columbus] never set foot on what is now the United States, his exploration lead [sic] to the European migration to the ‘New World’ and to many atrocities that our native peoples suffered. In my opinion, honoring Columbus is, at best, insensitive.”

Torres confirmed that she’s following up with the Lyon County commissioners to work on setting a date in November for Indigenous peoples, though she also expressed disappointment.

“I felt very defeated,” she said. “But at the same time, I know that we had a small victory out of that —  that we're going to continue to collaborate and work together on the resolution.”

The Paiute students of Mineral County

Members of the Walker River Paiute Tribe, whose original homelands make up many of the state’s rural counties, said that it’s important for local governments to recognize Indigenous Peoples’ Day in an official way.

On Monday morning, students at Schurz Elementary School, a public school on the land of the Walker River Paiute Tribe, celebrated the day with an educational presentation about the holiday, an empowerment walk on the track field and a traditional round dance.

“Indigenous Peoples’ Day acknowledges the perspective of the original stewards of this land,” said Lance West, the school’s principal. “For a long time in this country, that perspective was not acknowledged, or referenced or given value. So, in a high Native American student population, and community like ours, a public school on tribal land, this perspective and this holiday, for me, is very significant and means so much more than most holidays.”

On Thursday, many students at the school were most looking forward to the round dance, and they were excited to celebrate their Indigenous culture.

Ivan Alcarav, 11, cheerfully described the round dance: “It’s when all the people gather together and they hold hands and they just walk around to music and dance.”

West sees these as critical components of the education young tribal members receive at Schurz Elementary School. He also sees the students as future leaders who will be responsible for continuing to guide the tribe when he is an elder. West said he wants them to be critical thinkers and be introduced to conversations about systemic racism and oppression that continue to marginalize people of color, including Native Americans.

That conversation, though, should not only be happening in a school like his, West said. It should be occurring everywhere.He said he hopes the small event the school organized on Indigenous Peoples’ Day empowers the students to demand change and advocate for their community.

“We have always known that we were not discovered, our people — Pyramid Lake, Walker River, Paiute, Shoshone, Owen’s Valley, McDermitt — we have been here and our oral histories have told us that they have all been here since time immemorial. That means we’ve been here since the beginning of time.”