End of the rainbow II: Gold reserves in Nevada 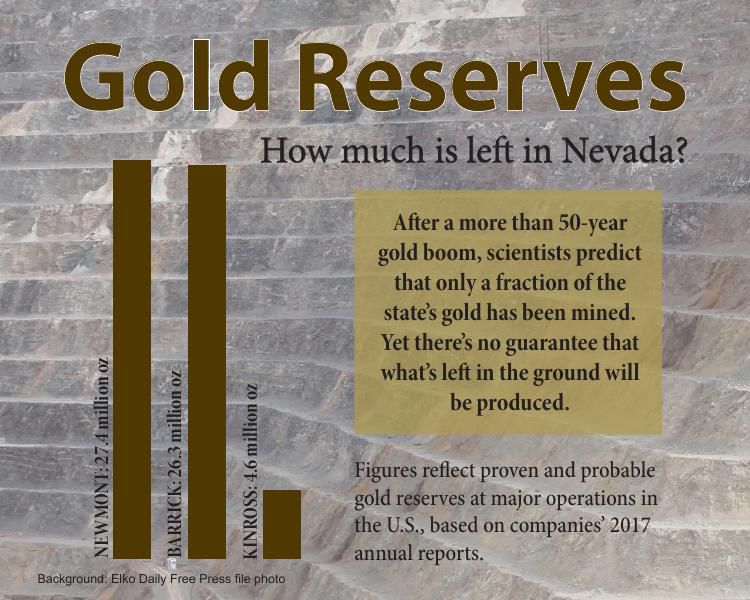 This article was originally published in Elko Daily Free Press on July 29, 2018.

These are terms that help the mining industry define progress and prospects. Yet even with the best science, neither the past nor educated guesses can predict the exact future of mining.

Commenting about the future of mining is like forecasting the weather, said Nevada Mining Association President Dana Bennett, because so many factors can affect the outcome.

With caution, people do analyze the data with the hopes of unearthing the mystery of the potentially profitable industry.

“Gold’s there. I suspect for a long time here in Nevada. It’s just we can’t put a number on it,” said John Dobra, a retired University of Nevada, Reno, professor of economics, specializing in resource and mineral economics. “Experience tells us there is a lot of it out there, and it’s kind of silly to think that we have found it all.”

He has learned in his 30 years of mining industry experience that estimates evolve.

“We had 5 million ounces in reserves in 1990, and we were saying, ‘Well, we have eight years’ worth of production,’ because you just divide current reserves by production to get mine life,” Dobra said. “From there, as exploration started in the 1990s, mine life and reserves grew up to close to 40 million ounces and 10 or 12 years of mine life left.”

Only a fraction of Nevada’s gold resources has been mined, experts estimate today. Large companies such as Barrick Gold Corp. and Newmont Mining Corp. constantly add to their reserves, or gold ounces that could make economic sense to mine. Sometimes, as the case of Barrick last year, companies add more reserves to their to-do lists than they actually process annually.

Of the 224.2 million ounces mined in Nevada through 2016, 89 percent has been produced since Newmont first poured gold the Carlin Trend in 1965, according to the latest Nevada Mineral Industry report by the Nevada Bureau of Mines and Geology. In 2016, the Carlin Trend accounted for 39 percent of the state’s total production, the report states.

“Half of the known Carlin-type gold has been mined,” said John Muntean, an economic geologist with the Nevada Bureau of Mines and Geology and the University of Nevada, Reno. He said mining on the Carlin Trend peaked in about 1998, “but it is still very robust 20 years later, and I think at least another 20 years if not longer.”

Muntean co-authored the mineral industry report. The Carlin-type gold deposit “is by far the most important gold deposit type in Nevada,” he said. “There are 120 million ounces of resources and reserves left.”

However, an estimate of reserves for the entire state has not been calculated.

Even if there were an estimate, there is “no guarantee that what is left in the ground will be mined,” Muntean said.

What comes next for Nevada’s mining industry depends on more than just gold resources, or potential ore bodies. The future of mining also depends on economic factors that define reserves, or resources with economics behind them.

“Whether it’s a reserve or not depends on the gold price,” Muntean said.

“It depends on so many things, like prices and technology and external conditions,” Dobra said.

Affecting the viability of mine operations are factors outside the industry’s control, such as the price of gold, regulations and commodity prices. From within, companies juggle capital requirements, production costs and shareholder interests.

“[I]f applicable laws and regulations are adversely changed, we can offer no assurance that the indicated level of recovery will be realized or that mineral reserves or mineralized material can be mined or processed profitably,” Newmont states in its 2017 annual report.

“The one constant factor is the geology because that’s been here all along, and the thing is, our knowledge of it is not constant,” Dobra said. “There is long-road potential, and I don’t think geology is the limiting factor. It is all the other stuff that is much less predictable.”

Dobra said the legal definition of a reserve is very precise: “It is not just gold in the ground. It is gold that can be mined at a profit with existing capital.”

Large- or small-scale producers must continually replace reserves depleted by production to maintain mine life and provide a return on investment. Depleted reserves can be replaced by expanding known ore bodies, locating new deposits or acquiring interests in reserves from third parties.

The least risky is to expand known ore bodies where production infrastructure is already intact and where operators already have identified a deposit.

Calculating reserves does not result in guaranteed figures or production, mining companies caution, but the numbers provide some guidance about what might be available for future mining.

The state’s top three gold producers in 2017 — Barrick, Newmont and Kinross Gold Corp. — based their reserve calculations on an assumed gold price of $1,200 per ounce.

At Barrick’s existing operations and Goldrush project, the company added 8 million ounces of proven and probable reserves through drilling; that amount more than replaced the amount processed, according to Barrick’s 2017 annual report. The company attributes the success to increased investment in mine exploration drilling last year.

“Barrick is one of the world’s leading gold mining companies with annual gold production and gold reserves that are among the largest in the industry,” the company stated.

Barrick reported its total proven and probable gold reserves for Nevada operations as of Dec. 31, 2017:

Newmont added 6.4 million ounces of gold reserves at a constant gold price in 2017 through near-mine exploration, according to the 2017 annual report. The company stated that about 75 percent of its reserves are in the U.S. and Australia.

In Nevada, Newmont estimated gold reserves at operations as of Dec. 31, 2017:

Kinross completed the acquisition of the Bald Mountain and Round Mountain Mines in 2016 and doubled the mineral reserves at Bald Mountain to extend mine life, according to the company’s 2017 annual report.

For its Nevada operations as of Dec. 31, 2017, the company reported proven and probable mineral reserves:

Beyond the top three gold producers, 14 additional operators ran gold mines in Nevada in 2017, according to the Nevada Bureau of Mines and Geology.