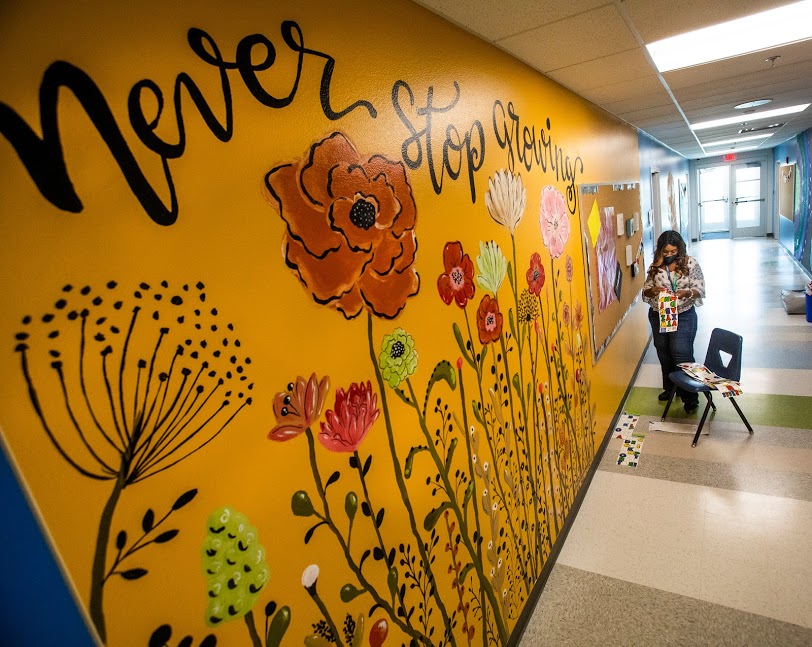 Myrtle Tate Elementary School will celebrate its 50th birthday this year by welcoming students to a new building. The northeast Las Vegas school — home of the Tigers — has traded its drab, largely windowless building for a sleek, modern upgrade that features plenty of natural light, colorful murals, improved technology and more wiggle room.

The $32 million project left some teachers in tears when they toured the new building last month. After a disrupted year and a half of learning, during which time COVID-19 tore through the school’s surrounding lower-income community, the new building offers a fresh start despite the pandemic still lingering in the background.

Myrtle Tate is one of five replacement schools opening for the 2021-2022 academic year, all financed as part of the Clark County School District’s 2015 Capital Improvement Program. Two new schools — Hannah Marie Brown Elementary School and Barry and June Gunderson Middle School — are opening this year in southwest Las Vegas and Henderson as well.

The Las Vegas Valley is no stranger to school openings. Decades of growth have meant a steady drumbeat of bonding campaigns, architectural renderings, construction sites, school-naming committees and ribbon-cutting ceremonies before the yellow buses arrive and backpack-toting students pour into the hallways.

The cycle is poised to continue: At the end of the recent legislative session, state lawmakers approved SB450, which grants school districts the authority to issue general obligation bonds without voter approval for a second 10-year period. The period will begin in 2025 after the district’s current bonding authority ends.

District leaders hailed the bill’s passage and approval by the governor as a victory that will enable the school system to continue chipping away at the $10.8 billion worth of needs identified in the 2015 Capital Improvement Program. But the bond rollover also signals a pivot in the district’s overall capital improvement strategy.

After years of keeping up with the region’s suburban sprawl, the district is eyeing more projects like that of Myrtle Tate Elementary School. Modernizing and replacing aging schools in older neighborhoods represents a different type of academic equity.

In 1974, Clark County voters gave the green light to a $39.4 million construction program that resulted in eight new schools and improvements or additions at multiple other buildings. Every few years after that, voters granted approval for another round of construction projects.

As those funds began to expire, the Legislature granted an extension that, without needing voter approval, created the 2015 Capital Improvement Program. It’s expected to funnel another $4.1 billion toward construction projects over the decade. Some of those projects are already complete. Others are underway.

That’s how district officials found themselves lobbying for the passage of SB450 this year.

“We were at the execution phase of all these projects. We weren’t planning new projects,” said Jeff Wagner, the district’s chief of facilities, while referring to the 2015 Capital Improvement Program. “We’re all aware we have a huge need, so [the bond rollover] is going to give us, really for the first time, the opportunity to do some strong strategic, long-term planning for the district and hopefully put the district in a much better place for facilities.”

Facilities staff plan to bring forward a 2025 Capital Improvement Plan, which will include options for prioritization, this fall, Wagner said. But a spreadsheet shared with lawmakers outlines the projects that SB450 could help bring to fruition.

Wagner said the bond rollover is expected to generate $2.9 billion, which he called a conservative estimate. Prior bond initiatives, he said, have ended up generating more money than originally calculated.

“The 2015 program was very successful at addressing capacity needs, especially at the elementary level,” he said. “This is the appropriate time in our I guess collective history to begin aggressively renewing that capital resource, so schools that were built in the 50s, 60s, even the early 70s have lived their useful life.”

But age-related problems come with its beauty. Built in 1930, it was the original site of Las Vegas High School. Principal Scott Walker, who is entering his 11th year leading the now-magnet school, rattles off the issues: The air-conditioning system either freezes students and staff or provides no heat respite at all. There’s only an on-off switch. Plumbing failures have created flooding in the outdoor courtyard and sewage smells inside. Hallways are dark and ceilings are low. There are no ramps or elevators. And the occasional passerby wanders onto the campus, which includes the main building, gymnasium, theaters and other smaller, detached buildings.

“Our kids deal,” he said. “They know that there might be a day that’s too hot or too cold in here.”

The bond rollover, however, could grant the school what Walker sees as long-overdue updates. Las Vegas Academy of the Arts is listed as one of the buildings slated for a phased replacement. But the replacement won’t involve any bulldozing.

The main academic building and gymnasium are listed on the National Register of Historic Places.

A handful of years ago, students, alumni, parents, staff and community members came together to talk about how to upgrade the campus without sacrificing any historic integrity, Walker said. Several architecture firms proposed plans, which the group mulled. Ultimately, one firm created a model rendering, which sits in the school’s library to this day.

Blue figurines in the model represent new or modernized buildings, excluding the main academic building and gymnasium, which would be untouched given their historic status. A new six-story building, which would house a student union, anchors the proposed changes.

For a while, Walker never thought he would see the model — or something like it — come to life. But the bond rollover has given him more optimism.

“I still think it’s ideal,” he said, referring to the architectural model. “However, I’ll take what we can get. I’m so thrilled that this passed because I’m hoping that I could at least see it before I retire.”

His enthusiasm for an upgraded campus isn’t solely about aesthetics or creature comforts. Walker said it could allow him to increase enrollment to 2,200 — up from roughly 1,700 — allowing more students the chance to attend the arts magnet school. He also envisions more laboratories for engineering and technology-related courses, giving his students a boost if they want to enter production-oriented jobs.

The possibilities, he said, seem endless.

“I can imagine,” he said, his voice trailing off.

It’s a situation that educators are experiencing five miles away at Myrtle Tate Elementary School. Last week, they were busy unpacking boxes and injecting their rooms with colorful decorations, wondering what the new year in a new building would bring.

Popek, the school’s principal, said she plans to closely monitor student data to see whether the upgraded environment leads to improved academics.

Ginger Stevens, the music teacher, has observed a different potential ripple-effect: landscaping and home improvements in the nearby neighborhood. Her own four kids attended the original Myrtle Tate Elementary School. They took photos outside before it was razed to make way for the new building.

But Stevens — surrounded by a sea of bass bars and xylophones  — said she is already feeling at home in the new building.

“My storage is ginormous,” she said. “And I’m filling it up really quickly.”