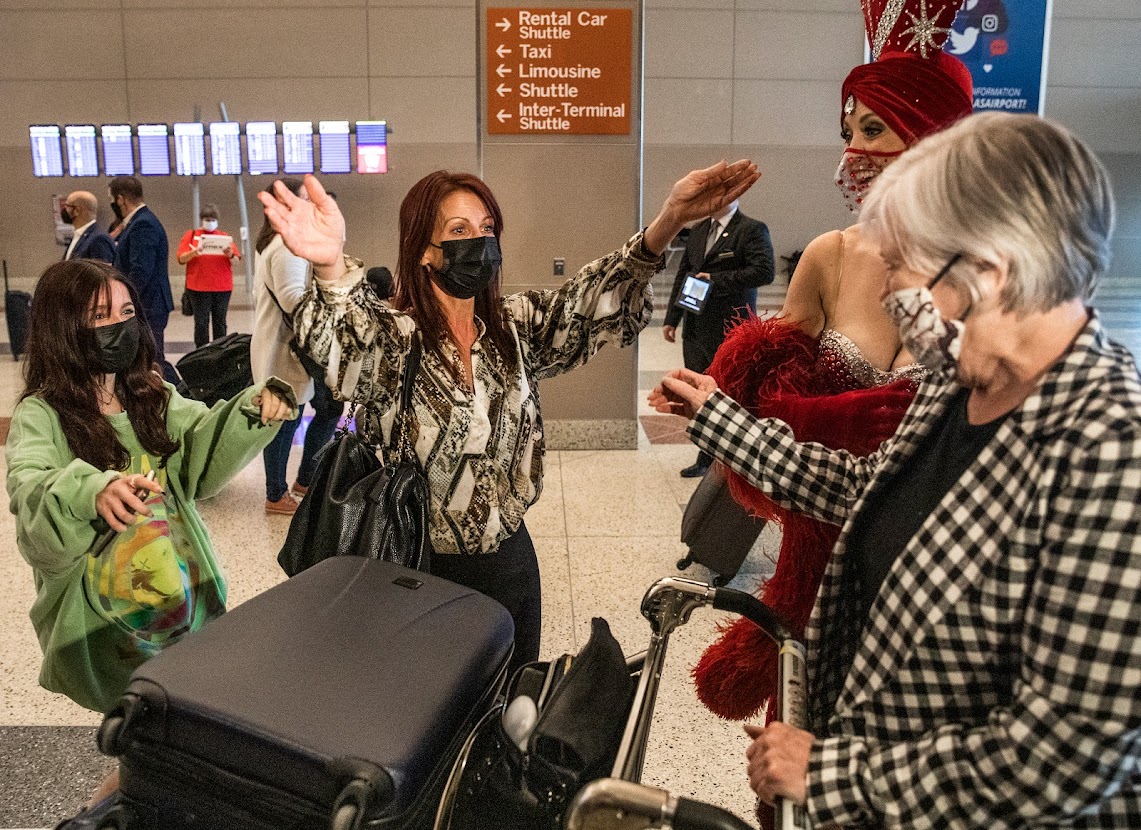 Timing turned out to be everything for Las Vegas resident Joanne Nina.

When the White House announced on Oct. 15 that pandemic-related travel restrictions for vaccinated international visitors would be lifted starting Monday, Nina immediately booked a flight for her mother, a resident of Yorkshire in Northern England, from London’s Heathrow Airport to Las Vegas.

They last saw each other at Christmas 2019.

“Who could have predicted it would be this long,” Nina said Monday while she and her 13-year-old daughter, Ava, waited for her mother, Christine Clayton, to clear customs at McCarran International Airport.

It turned out that Nina’s timing landed her mother on the first transcontinental flight to Las Vegas in nearly 20 months — a 10-hour-flight aboard a Virgin Atlantic Airways Boeing 787-9 dubbed “Miss Moneypenny.” When the three shared an emotional reunion, it was done in the presence of airport and Las Vegas tourism officials, a large media contingent and a pair of Vegas showgirls who added to the celebration.

A table full of free hats, T-shirts, face masks and cookies – all emblazoned with either Las Vegas logos or the “Vegas Happens Here” marketing slogan – awaited the more than 200 passengers and loved ones or friends awaiting their arrival.

All the attention seemed to both amuse and overwhelm Clayton. Hugging her granddaughter, all she could exclaim was, “She’s gotten bigger.”

They will have time to catch up. Clayton is staying through January, and she made it to the U.S. in time to see Nina get married in two weeks in Joshua Tree, California.

“When I booked my wedding, I presumed that things would be open by this time,” Nina said. “As soon as they announced it, I was like, ‘she’s going to be on that first flight.’”

The easing of international travel restrictions is being viewed as an economic boost for the Strip. Presidential proclamations during the early days of the pandemic suspended or limited entry into the U.S. by certain travelers in an effort to slow the spread of coronavirus. The ban was directed at most European, Asian, United Kingdom and Latin American countries.

Prior to the pandemic, McCarran had direct flights to and from 11 different countries. Until Monday’s flight from London, the airport’s total international destinations included just Mexico and Canada.

Analysts have long pointed to the lack of direct international visitors into Las Vegas as a missing component to typically reliable visitation and gaming numbers.

In September, McCarran recorded 86,481 international passengers, a decline of 73.5 percent from pre-pandemic September 2019. For the first nine months of 2021, international airline passengers were down 85.6 percent compared to 2019.

The airport saw more than 3.8 million international travelers in 2019, an average of more than 316,000 passengers per month.

But after witnessing several joyous and tearful celebrations Monday, Vassiliadis said the reopening will also give a lift to Las Vegas families.

One of the first passengers to clear customs was Andrew Amersee of Glasgow, Scotland who came to Las Vegas to see his son. They had been apart for two years.

“When they opened it up back in October we booked our flight,” Amersee said. “It just happened it was the first flight in.”

The emotional reunion between Nina and her mother caught the attention of Clark County Director of Aviation Rosemary Vassiliadis. The reopening of international travel will reunite families.

Vassiliadis said the lifting of travel restrictions has reinvigorated the airport’s international interest. British Airways flights to and from Heathrow are scheduled to begin next week. She said the airport has received interest from KLM Royal Dutch Airlines, which provides direct flights from Amsterdam, and Copa Airlines, which offer service between Las Vegas and Panama.

She said KLM will create another gateway from Europe, while Copa will open up Las Vegas to Latin America, which includes Brazil and other parts of South America. Another European gateway, Edelweiss from Switzerland, is expected to return in March or April.

“I think we'll have that same pent-up demand (from those two markets) that we're going to be seeing from London and in the United Kingdom,” Vassiliadis said.

She added the market is showing a comeback.

“We're certainly not at our high,” she said. “I think when the internationals load what they traditionally call their ‘summer schedule’ which is the beginning of April, I think that's when we're probably going to see probably full recovery.”