For a generation of younger Nevadans, climate change can be a personal — and political — issue 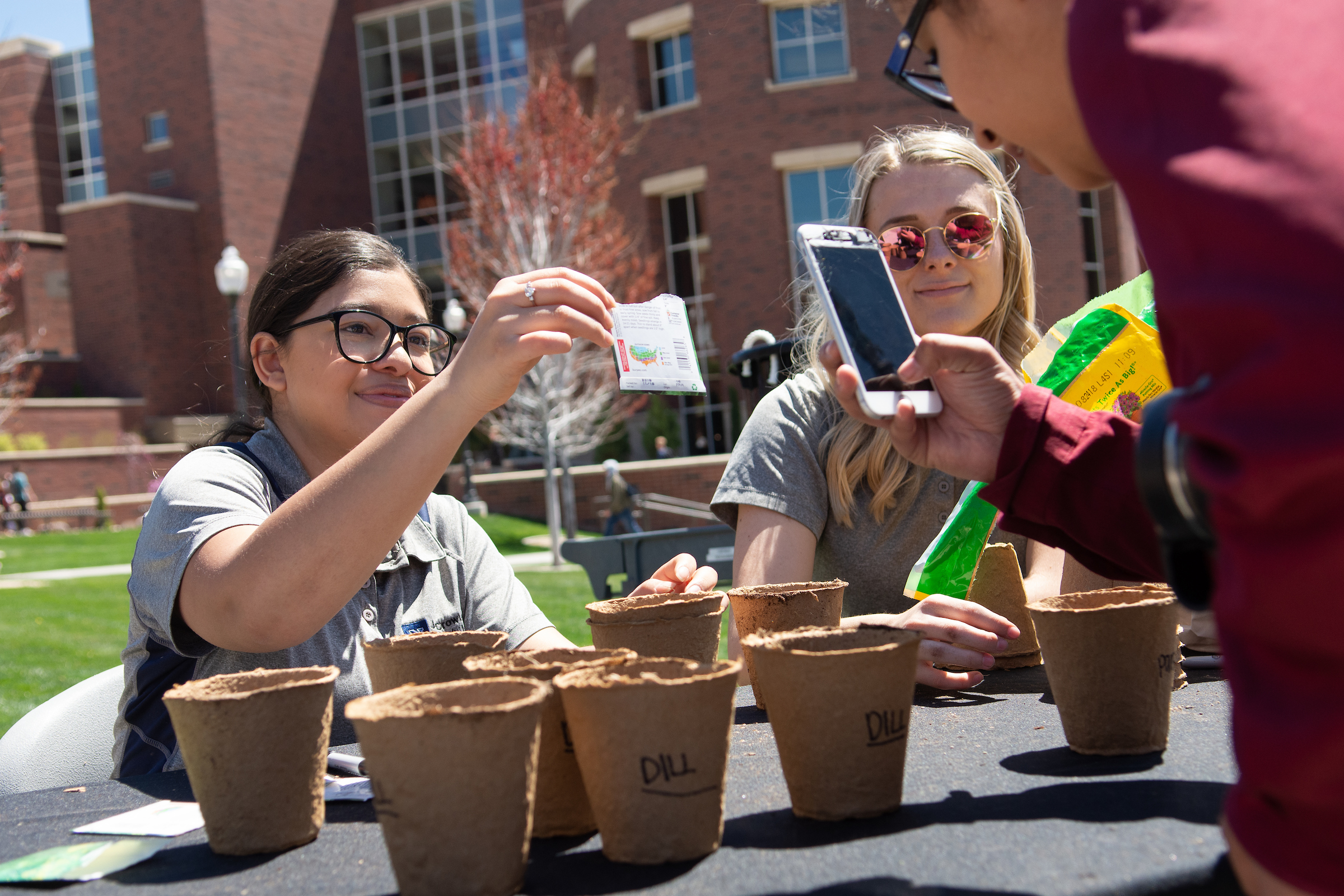 A little more than year ago, Tyler Chervo, a senior studying in UNR’s molecular microbiology and immunology program, went vegetarian. A big reason why: to help fight climate change.

“[Climate change is] something that’s definitely on my mind,” Chervo said during an interview at UNR’s Earth Day Festival on Monday. “Thirty years from now, I kind of wonder what is my life going to be like and what is life for everyone else on this Earth going to be like?”

Like many college students who belong to a younger generation of Americans, Chervo said he was worried about the threat of human-caused climate change to the planet. At the state level, Chervo said he thinks things are moving in the right direction. On Monday, Gov. Steve Sisolak signed bipartisan legislation requiring utilities to increase their renewable supply to 50 percent by 2030.

“At the national level right now, things could be better,” he said.

According to a survey released Monday by Harvard’s Institute of Politics, 46 percent of young Americans now say “government should do more to curb climate change, even at the expense of economic growth.” That’s a 14 percent jump from four years ago. The poll, which surveyed 18- to 29-year-olds, found that 73 percent disapproved of President Trump’s handling of the issue. Trump has repeatedly denied climate change exists and pulled out of the Paris Agreement.

“In our polls, we recently began seeing a difference between young Americans and older Americans, such that young Americans are growing more concerned than their parents and grandparents, especially young conservatives,” Ed Maibach, a George Mason University professor who studies public perceptions toward climate change, wrote in an email.

Although there is still a partisan divide on whether voters accept that the climate is changing because of human activity, the divide is less stark when age is factored in. Last year, Pew reported a gap between millennial Republicans and Baby Boomers over environmental policies. When compared to their elders, millennials in the party said government was doing too little to address climate change or protect habitat, rivers and air quality — often by a 20-point spread or more.

When it came to the question of what caused climate change, 36 percent of GOP millennials attributed warming to humans, compared to about 18 percent of Republican Baby Boomers.

"That's a larger share compared to older Republicans, but still a far smaller share than Democrats in general,” said Brian Kennedy, a research associate at Pew.

Democrats, whether they are old or young, mostly agree on the issue.

For Savannah Schauer, a senior studying biology and business administration, tackling these issues extends beyond the climate. Schauer, dressed in an outfit made of 300-500 plastic bags as an event organizer at UNR’s Earth Day, said she was also concerned with issues like ocean trash. According to scientific papers reported by National Geographic, there are 5.25 trillion pieces of plastic trash spinning in the ocean and 269,000 tons on the surface. But she said she is reminded of climate issues — and spurred into action — by her everyday experience.

“Even just driving around when I'm behind bigger trucks and then all of the sudden smoke starts pouring out of the truck in front of me, it makes me think a little bit,” Schauer said.

“And I always want to know how I can get more involved," she added.

Patricia De La Hoya, a UNR student studying political science and philosophy, attended the annual Earth Day Festival in a PETA shirt. She conceded that most people she knew wouldn’t go vegan overnight. But she has encouraged friends to cut down on their meat consumption.

“A lot of people say that nowadays your dollar has more of a vote than your actual vote does,” she said, arguing climate action is needed on all levels. “And I completely agree. I think money talks immensely. And what we put our money toward impacts our world on a larger scale."

For decades, policymakers have struggled to address climate change, in part because the long-term solutions require more than individual action. Looking at climate change only through the lens of the individual is a typical American response, said Anthony Leiserowitz, a research scientist and the director of the Yale Program on Climate Change Communication.

“Far too many people still view climate change and the environment as individual choices and not political choices — political meaning changing the system in which we live,” he said.

Leiserowitz said it’s important not to stereotype millennials, Gen-Xers or Baby Boomers. But he said his work has also shown a difference between older and younger Republicans on the issue. Although he could only speculate as to why that might be, he said Democrats and Republicans — young and old — support clean energy like wind and solar, often seen as climate solutions.

He said, in large part, that’s because in many cases, the issue of wind and solar has been linked to the economy and jobs. In other places like Nevada, some renewable technologies, such as rooftop solar, have had broad appeal because they are seen as giving consumers a choice in a sector that has typically been ruled by regulated monopolies. How politicians, companies and the media frame issues around climate and climate solutions can make a difference, he said.

Democratic Assemblywoman Sarah Peters, an environmental consultant who was elected to the Legislature last year, campaigned on climate change in her bid to represent her Reno-area district. She said there is an immediacy to climate change for younger generations.

“Millennials have come to a point where we have to act,” said Peters, a millennial lawmaker. “And social media, especially, has given us an outlet for that — being able to connect with people, being able to share a singular message, being able to create momentum and a movement that I think was harder to do for Gen-Xers or earlier [generations].”

One of the biggest challenges in addressing climate change, though, has to do with the fact that its impacts are often perceived as incremental and distant in the day-to-day humdrum of life.

A changing climate is already affecting Nevada and the Southwest by increasing temperature, changing precipitation patterns and making wildfire more extreme, according to the most recent National Climate Assessment. But scientists say the most extreme impacts are still to come, making it easier for politicians, who tend to be in an older generation, to put off the issue.

Another reason millennials might be paying more attention is that the effects of climate change are more evident, said freshman Democrat Assemblyman Howard Watts, a millennial who worked in environmental advocacy before joining the Legislature.

“We see so many of these record-breaking, unprecedented climate-related events,” he said.

As the Earth Day Festival started winding down Monday afternoon, Kailee Henry, a student majoring in public health, said blame is often placed on a single-use culture or on consumers. But she said politicians and companies haven’t been helping enough to solve the problem.

“The older generations aren’t doing a lot about it, so we have that responsibility...to do better,” Henry said. “We need to lower our intake of meats and fossil fuel consumption because just in the span of time that humans have been on Earth, we’ve done way worse things to the environment than any other living creature.”