From an ecologist’s eyes, Great Basin National Park holds clues to the past 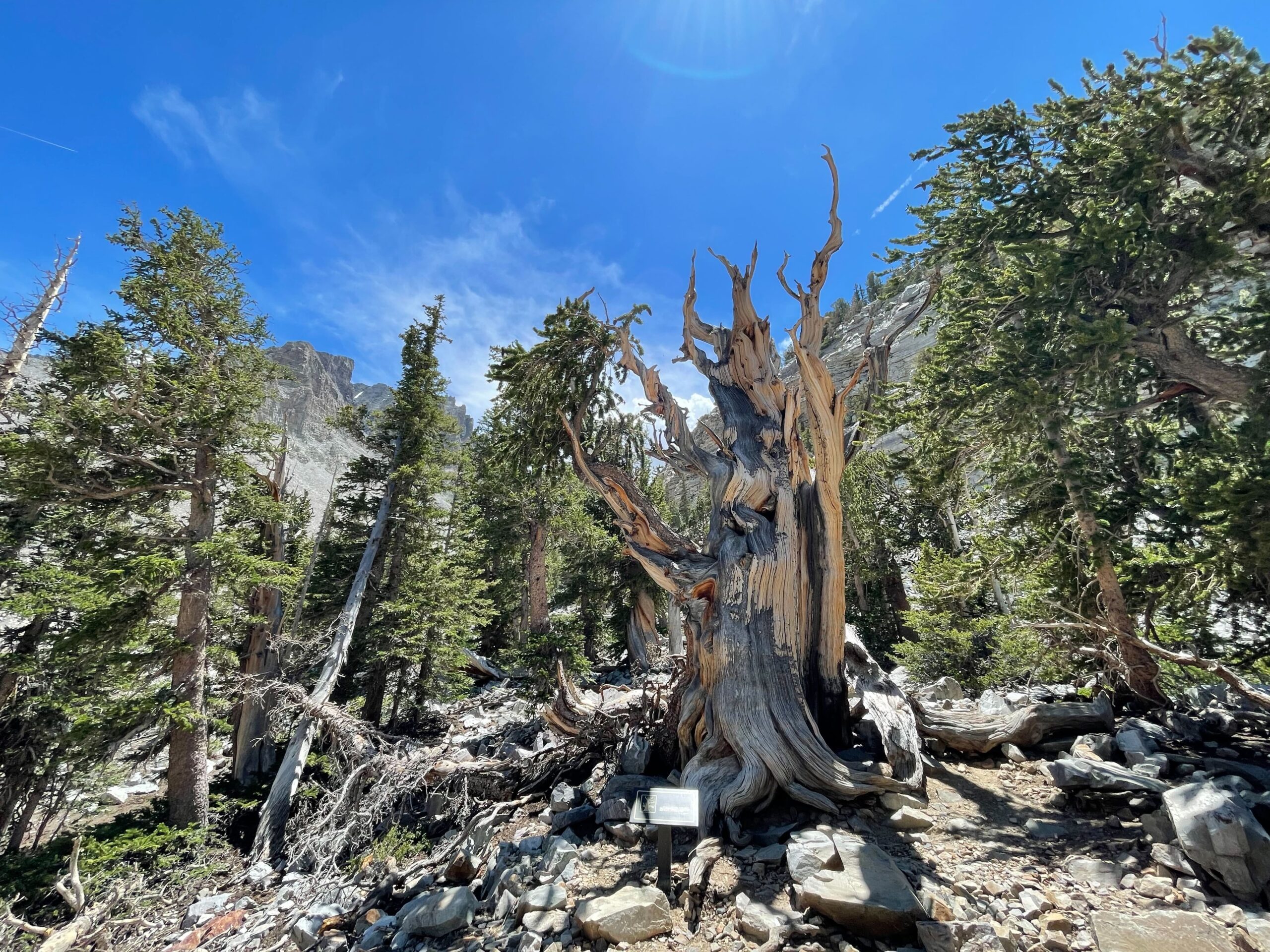 Our multimedia editor Joey Lovato recently joined PBS Reno to film a “Wild Nevada” episode on Great Basin National Park. As part of that trip, we are sharing some of Joey’s reporting in the newsletter and on our podcast next week. The "Wild Nevada" episode will air in Spring 2023.

Time, as told by the Bristlecone pine, is a source of solace for Gretchen Baker, an ecologist for Great Basin National Park, where the warped and ancient trees have made their home for many thousands of years, defying an arid climate and harsh winds that whip around them.

“When you get up to the trees, and you look at the Bristlecone pines, especially the old growth ones, you just feel a little different,” Baker said in an interview. “Maybe it's knowing that they are so old and the sense of awe that they started growing long before you were born, long before your parents were born, your grandparents [and] back many, many generations.”

The iconic Bristlecone pines standing in Great Basin National Park — and scattered across the Southwest — are one of the oldest living species known to Earth, with individual trees persisting against the elements for as long as 5,000 years. Like the cave systems that have developed near the Bristlecones, these trees reveal a past that is far more than meets the eyes.

Bristlecone pines serve as quiet sentinels for the park, appearing on posters and in newsletters. Great Basin National Park, perched above Snake Valley near Ely and the Utah border, was established in 1986. But it attracted visitors long before then. In 1922, President Warren Harding designated Lehman Caves as a national monument, land that would become the basis for the expanded park. Over the weekend, the park is marking its centennial with several events.

But the park’s wonder comes from looking at the world on a far longer timescale. One hundred years, a generational period for humans, is a fraction of life for slow-growing Bristlecone pines. In fact, just the pine needles belonging to the trees can live for 40 years, Baker said.

The trees are so old, she said, that they can be used to measure geology — looking at the erosional rate of rocks underneath them as they move away from the tree roots. Samples taken from Bristlecone pines, known as cores, are also used to reconstruct a regional climate history.

But Bristlecone pines, across their range, face several threats, from drought stress to beetle infestation and bark fungus. Warming temperatures, combined with drought, are putting stress on the trees — and at the same time, making conditions more conducive for bark beetles, which threaten them. It is striking, especially, in a species known for weathering harsh climates.

But Baker said the trees within Great Basin National Park have withstood some of these pressures. Still, these threats and others, including wildfire, are forces the park is planning for. Baker said she has seen seedlings developing at higher elevations as the climate has warmed.

“They’re trying to find a more hospitable climate to grow,” she said.

Bristlecone pines are not the only feature of the park where time stretches backward thousands of years, Baker said. There is another comingling of climate, geology and biology happening out of sight and underneath the ground. White Pine County, where the park is located, contains most of the cave systems in Nevada; some are known to the public, but others are still wild.

With federal funding, Baker and a “dream team” of cavers are working to better understand the area’s wild caves, hoping that it will unlock a slew of secrets about unique species and how our water cycles throughout the region — not only today but over time. Records from caves, like the cores of tree rings, have been used to piece together an important regional climate record. The study will also be a mapping exercise, to understand where the caves lead and their features.

Some of the caves, Baker notes, offer extreme environments, with high carbon dioxide or low temperatures (one high-elevation cave has year-round ice and snow inside of it). In these cold environments, Baker said, cavers prepare by bundling up in warm suits and face coverings.

And yet, despite harsh conditions, species (known as extremophiles) are able to persist within these caves, evolving to these climates over many years. Already, as the wild caves project starts, Baker said the team is investigating and learning “about spiders in some caves that have really long webs that look like they might pass down from generation to generation.”

“We’re expecting a lot of scientific publications out of this project, as well as just a lot of fun learning more about what’s in the area,” Baker said.

Want to learn more? Tune into our podcast IndyMatters. Our interview with Baker will air next Tuesday and later this summer. You can listen to IndyMatters anywhere you get your podcasts.

Where Las Vegas sits in the Colorado River: My colleague Tim Lenard put together a video explainer looking at what steps Las Vegas has taken to prepare for the current drought and for future cuts expected to hit the Colorado River. Over the past two decades, a prolonged drought — worsened by climate change — has exposed a longstanding imbalance between supply and demand in a watershed that supports about 40 million people across the Southwest.

Although Las Vegas uses a small portion of Colorado River water, Southern Nevada depends on Lake Mead for about 90 percent of its drinking water. Over the past two decades, Las Vegas water officials have implemented sweeping conservation measures, including offering “cash for grass” to reduce per capita water use, with a particular focus on outdoor irrigation, a main driver of municipal water consumption. In recent years, the Southern Nevada Water Authority has also invested in expensive infrastructure to reach water from Lake Mead as the reservoir drops. But the drought is requiring the water authority to push for even deeper conservation measures.

More on those efforts in this video:

As one man-made lake sinks, another (Lake Las Vegas) gets cut off: “Lake Las Vegas is currently not getting filled with additional water after an intake pipe at Lake Mead can no longer draw water,” KLAS’ Vanessa Murphy reported. I’m hoping to write more about this issue soon.

“The developer of a geothermal power plant facing legal challenges in Nevada agreed Monday to suspend construction just hours after a U.S. appeals court had refused to halt the project that opponents say would harm an endangered toad and destroy sacred hot springs,” the Associated Press’ Scott Sonner wrote this week.