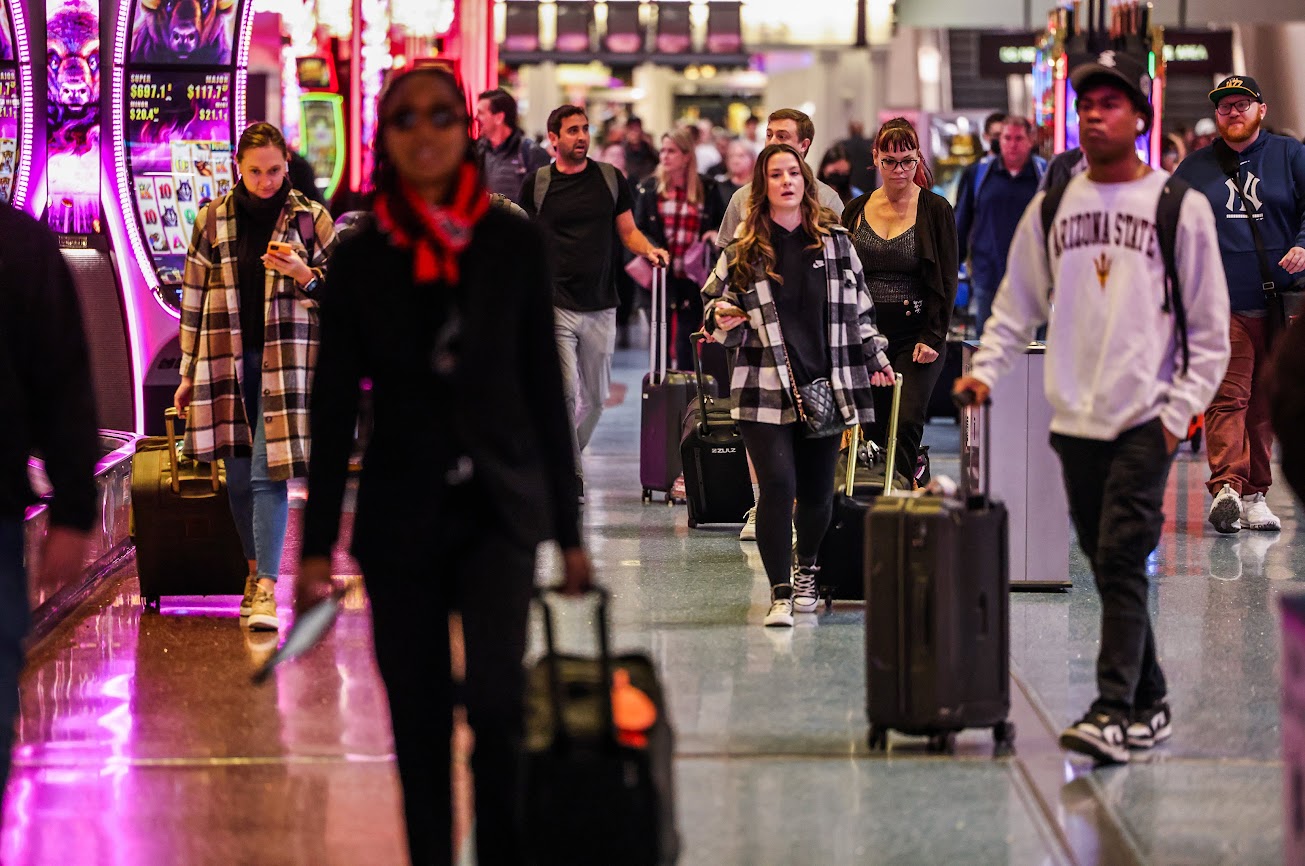 In a statement Thursday, airport officials said the 5.17 million passengers in October was the fourth time in 2022 the facility shattered its monthly record. Prior to October, July held the previous single-month record of 4.86 million passengers.

For the first 10 months of 2022, Reid Airport has drawn more than 43.7 million passengers, a 37.3 percent increase from 2021. The airport’s single-year record for passenger volume was 51.5 million.

In a statement, Clark County Director of Aviation Rosemary Vassiliadis said the airport recognized that the airport not only services visitors to Las Vegas but also locals in a much higher volume.

She said the parking facilities at the Terminal One garages have been reaching capacity, not only on weekends but also during mid-week.

“To accommodate these vehicles and enhance the customer experience, we will begin a months-long project early next year to increase public parking options in and near these garages,” Vassiliadis said.

Gaming slowdown? Not in Nevada as casinos head toward a record year

October marked the 20th straight month of $1 billion or more in state gaming revenue, according to figures released Tuesday by the Gaming Control Board. Statewide, gaming revenue sits at $12.3 billion for the first 10 months of 2022, more than 12 percent above the record $13.4 billion recorded in all of 2021.

Strip casinos have recorded $6.8 billion in gaming revenue through October, 20 percent ahead of the $7.07 billion collected all 2021.

Despite visitation to Las Vegas trailing pre-pandemic levels, customer spending habits continue to increase. The trend is nationwide, according to the American Gaming Association; U.S. gaming revenue has increased almost 15 percent in the first nine months of 2022 compared to a year ago.

The state and the Strip have already surpassed the full-year pre-pandemic gaming revenue totals recorded in 2019.

In October, statewide gaming revenue was $1.28 billion, a 4.8 percent increase from 2021. Only one primary casino market – North Lake Tahoe – saw gaming revenue decline compared with a year ago.

Strip gaming revenue of $705.8 million in October was a less than 1 percent increase over October 2021.

Michael Lawton, the control board’s senior economic analyst, said the combined markets outside of the Strip, which saw revenue grow 10.6 percent, were the catalyst for the state’s October increase.

“This represents the largest increase recorded by these markets since February,” Lawton said. “The combined markets have now recorded increases year over year in three consecutive months after experiencing four successive (monthly) decreases.”

As for the Strip, analysts were encouraged by the totals. Lawton said one less weekend day in the month was offset by a packed event calendar, which included concerts and three high-profile sporting events.

Macquarie Securities gaming analyst Chad Beynon expects the Strip to continue to pace ahead of 2021’s numbers. In a Monday research note to investors, Beynon said internet searches for Las Vegas hotel rooms increased almost 8 percent in October after a 1.3 percent decline in September because of “seasonal pullback.”

Even with fewer visitors, there has been little effect on the gaming consumer.

“We will be closely watching spend per visitor [numbers], which has expectedly moderated in recent months,” because of more non-gaming visitation, Beynon told investors in a research note on Monday. “But as management teams have noted recently, there hasn’t been an impact on customers yet.”

Casinos in downtown Las Vegas combined for a single-month gaming revenue record in October of $90.5 million, a 19 percent increase. Downtown casinos are 6.3 percent ahead of 2021’s single-year record of $842.2 million.

Downtown slot machine revenue increased 28 percent in October, while table game revenue was up 4.4 percent. Downtown sportsbooks saw a 20 percent increase in revenue from a year ago.

Other markets in the state are also on a record gaming revenue pace with two months left in the year.

Gaming revenue in Washoe County is up 2.5 percent compared to 2021.

Special events and an improved convention volume helped boost Las Vegas visitation to more than 3.6 million people in October, exceeding a 2021 monthly total for the first time this year. The figure was 7.3 percent higher than October 2021 and nearly matched the October 2019 number, falling short by less than 1 percent.

Convention attendance was just under 4.2 million, the highest monthly total this year.

“We heard operator enthusiasm for October coming out of third-quarter earnings, and we believe these record average daily rate levels are evidence of their enthusiasm,” CBRE gaming analyst John DeCree wrote in a research note. “The accelerating recovery of group and convention business is highlighting our bullish thesis on the Las Vegas Strip.”

Nevada sportsbooks recorded revenue of $56.9 million, an increase of 17.7 percent from a year ago. Lawton said the sportsbooks won more than 6.1 percent of all wagers during the month compared with 4.4 percent in October 2021.

Sports wagers in October totaled $920.8 million, down 16.3 percent from a year ago, when sportsbooks took in more than $1.1 billion in bets.

Mobile wagering in October accounted for almost 67 percent of all sports wagers.