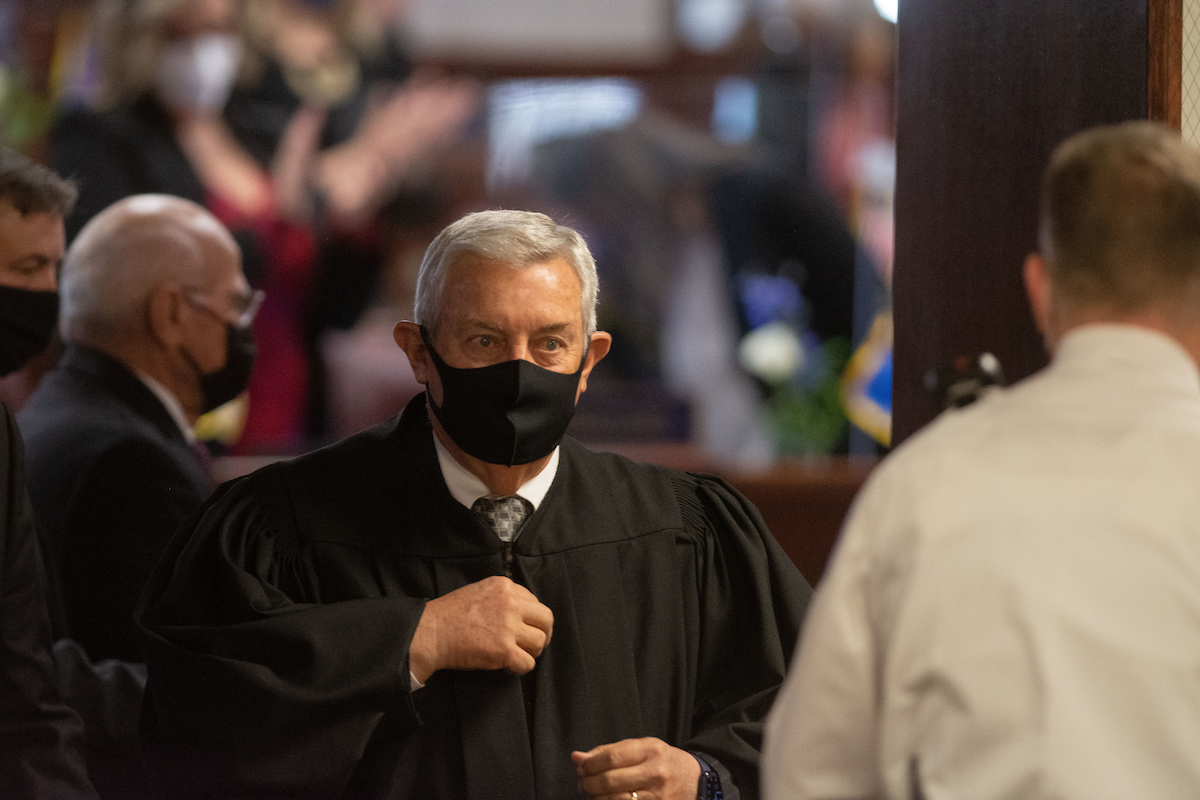 Nevada Supreme Court Chief Justice James Hardesty plans to leave the job at the end of his term in 2022, capping off a nearly two-decade stint atop the state’s highest court that saw efforts to reform the state’s criminal justice system and usher in a statewide Court of Appeals.

Hardesty confirmed his plans to not run for re-election in an emailed statement on Tuesday, saying it had been an “unimaginable honor and distinct privilege” to serve in the judicial branch over the past 24 years.

“While I will genuinely miss serving the citizens of our great state, I look forward to the next chapter of my professional career and spending more time with my wife and family,” he said in the statement.

Hardesty, 72, was first elected to the high court in 2004, winning re-election bids to the seven-member body in 2010 and 2016. He is currently in his third term as chief justice of the court — a position that rotates between senior justices of the court and serves as the “administrative head of the Nevada Judiciary and the public voice of the Nevada Supreme Court.” His previous terms as chief justice were in 2015 and 2009.

He also spent six years as a district court judge in the Second Judicial District of Washoe County, first elected in 1998 and serving as chief judge of the district court in 2001.

One of his most public roles came as the “main spokesman” for the 2014 ballot question that created the state’s three-member appeals court, which operates on a push-down model (meaning the Supreme Court assigns the appeals court largely non precedent-setting cases) and hears roughly one-third of cases assigned to the state’s highest court.

At the time, Nevada was one of 10 states that lacked an intermediate appellate court between the district court and high court — a paradigm blamed for a rising backlog of thousands of undecided cases. However, voters had previously rejected similar appellate court initiatives at the ballot box at least four times since the late 1970s. The 2014 ballot question passed with roughly 54 percent of voters in favor.

“It was abundantly clear to me that if we didn't do anything, the delay in the decisions of people's cases, was very adverse to an efficient, timely justice system,” he said. “And I felt that that was a key component of what we were to advocate for, was improvements to the administration of justice.”

In an interview, Hardesty said that the appellate court has worked largely as anticipated — saying that only about 1 percent of Court of Appeals decisions are reconsidered by the full Supreme Court, and that the intermediate appellate court has had a “dramatic impact” on the time it takes for appeals to work their way through the state’s legal system.

Another benefit, he said, was that the reduced backlog allowed the state Supreme Court to take rapid action on pressing or important cases — pointing to the court’s relatively quick turnaround in a major legislative taxation case this spring.

“It's allowed us to act pretty quickly on pretty complicated matters,” he said.

Still, Hardesty said he was “deeply concerned” that the court may face a serious increase in the case backlog because of a growing accumulation of unresolved, pent-up cases in trial courts delayed amid the COVID-19 pandemic.

“All of those cases … could take a long period of time to dig out of,” he said.

Last year, members of the court issued an order announcing plans to name the recently constructed Supreme Court and Court of Appeals courthouse in Las Vegas after Hardesty, upon his retirement.

Hardesty also said he was pleased with helping implement a more data-driven approach to criminal justice issues through service on the state’s Advisory Commission on the Administration of Justice. The justice said he helped the state connect with the Crime and Justice Institute (a partnership between Pew Charitable Trusts and the Department of Justice’s Bureau of Justice Assistance) to undergo a deep dive into crime data and potential improvements to the state’s criminal code.

The group ended up advancing 25 recommendations to the panel in early 2019, estimated to save the stateup to $640 million in prison costs. Many of those recommendations took the form of AB236, which passed out of the 2019 legislative session amid intense debate and heavy amendments.

“Not all criminal justice reform should be driven, in fact, in my view none of that should be driven except by data that accurately sets out what it is [that] needs to be modified and how those modifications can improve public safety as well as rehabilitative outcomes,” he said.

In his statement, Hardesty said he was “particularly proud” of the role he played in the creation of the Court of Appeals, as well as work on construction of the courthouse in Las Vegas, adoption of a business plan that helped fund courthouse and technology updates throughout the state, and expansion of a program that helped increase funding to legal aid organizations that help people who cannot afford a lawyer.

He also noted other accomplishments, including efforts to revamp the state’s guardianship system, work on a bevy of criminal justice reform initiatives with advocates and state lawmakers, and authoring more than 350 published opinions.

In his statement, Hardesty said that he is looking forward to the “next chapter of my professional career,” but said on Tuesday that he has no solid plans once he leaves the bench — just an anticipation that he’ll continue to do “something.”

“You know, you can only golf so much, and well, I'd like to golf once in a while, [but] I don't see myself doing that every day, that's for sure,” he said.