Harry Reid, scholars discuss rise of anti-Semitism — and need to speak out against it — at UNLV event 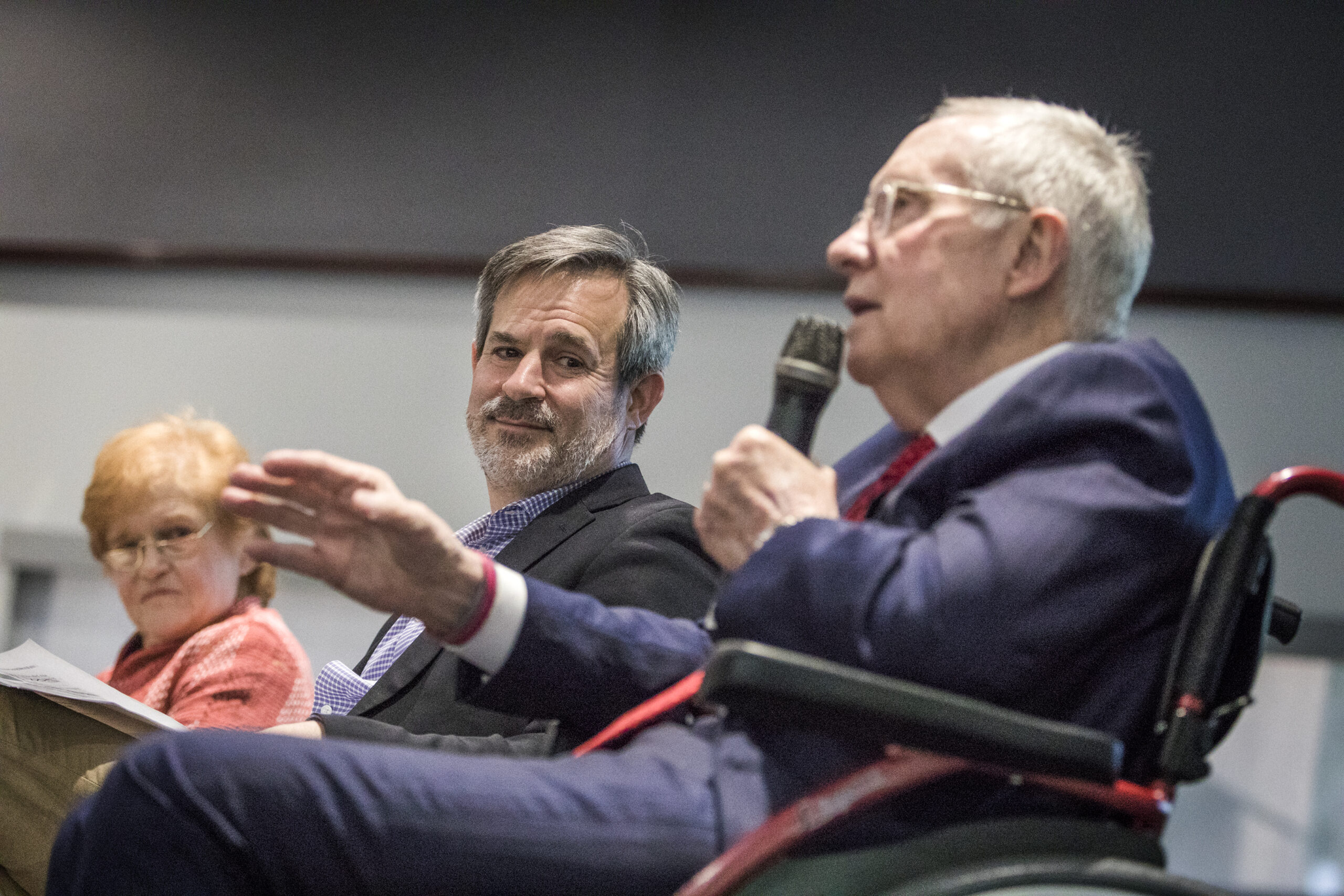 After a gunman killed 11 people inside a Pittsburgh synagogue last fall, a swastika appeared in a UNR residence hall. It was carved into a wall with a pencil.

The symbol denoting hatred toward Jewish people popped up again in March during Vermont Sen. Bernie Sanders’ rally in Henderson. A protester standing on the park perimeter carried a poster board that in giant, red-painted letters bore the senator’s name with a swastika below it.

Just before the campaign event, Sanders had been visiting former Nevada Sen. Harry Reid. The incidents offered proof to Reid that anti-Semitism — a prejudice he knew existed but hadn’t encountered face-to-face in his many travels — was on the rise nationally and locally.

“When we hear anti-Semitic hate, speak out against it,” Reid said. “Don’t let it go.”

The former Democratic leader’s comments came during a discussion Thursday at UNLV about anti-Semitism. Reid helped organize the event, which featured two scholars — Deborah Lipstadt, a professor at Emory University who wrote a book called “Antisemitism: Here and Now,” and Jonathan Weisman, a deputy Washington editor at The New York Times and author of “(((Semitism))): Being Jewish in America in the Age of Trump"”

The conversation focused on this apparent resurgence of anti-Semitism, a form of hatred that dates back centuries. When white supremasists marched in Charlottesville, Virginia, in August 2017, some chanted, “Jews will not replace us!”

More recently, Minnesota Rep. Ilhan Omar has been accused of anti-Semitism after she insinuated on social media that a powerful Jewish lobbying group could buy allegiances with members of Congress. “It’s all about the Benjamins baby,” she tweeted.

President Donald Trump has joined with other Republicans in criticizing Omar, while politicians on the left have lambasted him for not doing enough to condemn the kind of white nationalism and anti-Semitism seen in Charlottesville.

Lipstadt said the “Jews will not replace us!” chant refers to a belief that Jewish people have helped other minority groups gain power in the United States. But she didn’t lay blame on any one political party.

Seeing anti-Semitism only through a lens that reaffirms one’s own political beliefs “weaponizes” the hatred, Lipstadt said, and makes it that much more difficult to fight.

Another barrier to combating anti-Semitism and other forms of hatred: the internet.

Years ago, people had to seek out anti-Semitic material, Weisman said, but the internet has allowed the “purveyors of hate” to take their material directly to younger, impressionable audiences in YouTube chatrooms and Google Hangouts. He equated it to the Whack-a-Mole arcade game: If you suppress the bigotry in one forum, it will pop up somewhere else.

“It is a really, really difficult problem, and it cannot be understated how insidious it is,” he said.

In fighting anti-Semitism, Lipstadt and Weisman hearkened back to what Reid said at the very beginning of the discussion — that people need to speak out whether it be in public settings or during family dinners. Lipstadt said silence only allows the bigotry to fester.

“When you hear something, you’ve gotta say something — not to change the minds of the people who are saying it,” she said. “In most cases, that’s like trying to push a boulder up the mountain but to telegraph to the people at the table, especially the young people, that this is not tolerated.”

Weisman added that it’s important for various groups to create alliances as means of shutting down anti-Semitism and other forms of bigotry. He said it’s a “more powerful” message when groups — such as blacks, Jews, Latinos or Muslims — stand together and denounce hatred.

Reid sat on stage with the authors, but he let them do most of the talking; however, he wrote an op-ed that appeared in Newsweek on Monday, describing his alarm over the apparent increase in anti-Semitism.

“A lot of young people have no relation to the Holocaust; it’s not something they understand,” he said. “I think we need to talk about that and educate young people about the horrors of six million (people) being killed because they were a certain religion.”