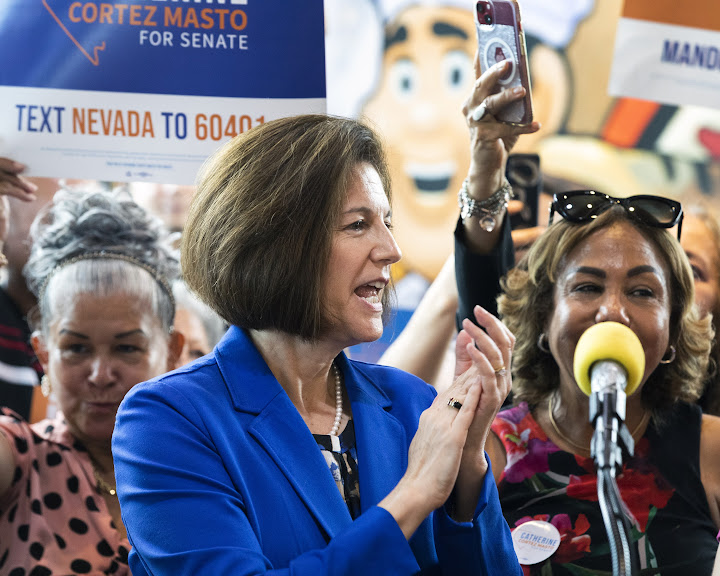 Cortez Masto brought in more than $15.2 million during the three-month period from July through September, while Lee raised $1.2 million, data released over the weekend from the Federal Election Commission (FEC) shows. That pushes their respective fundraising totals for the midterm election cycle to $45.4 million and nearly $5.5 million — both record amounts for a Nevada Senate race and House race.

Alongside other Democrats in the federal delegation, Reps. Dina Titus and Steven Horsford, Cortez Masto and Lee also spent exorbitant amounts during the third quarter, with a major focus on television and digital advertising. All four are locked in competitive races against Republican challengers.

Democrats have held each of those seats since at least 2018, including a statewide Senate seat, which a Republican last won in 2012, and three congressional districts based primarily in Democrat-leaning Southern Nevada. But the incumbents face a combination of powerful headwinds, including President Joe Biden’s low approval rating and an inflation rate pushing costs for fuel and food upward.

Below, we explore top trends and eye-popping numbers from the latest federal campaign finance reports, which cover fundraising and spending activity from July 1 through September 30. Check back at The Nevada Independent tomorrow for additional coverage of campaign finance details from state-level candidates.

For the whole of the 2022 midterm cycle, Democratic incumbents in Nevada have far outraised their Republican challengers.

That remains true now, as the national spotlight on Nevada’s Senate contest has drastically inflated the amount of campaign cash flooding into Democratic coffers.

Still, even as they continued to lag the money operations of the Democratic incumbents, Republican candidates in federal contests vastly expanded their fundraising relative to their own performance during or just following the end of the primary season in the second quarter.

Much of that growth was sustained by Laxalt, a high-profile Senate candidate who more than doubled the $2.9 million he raised from April through June. That bump comes in part from receiving a substantial amount of “unitemized” small dollar contributions, which grew from $370,000 in the second quarter to $2.2 million in the third quarter.

In the Senate race, Cortez Masto spent more than $20 million, more than she did in the entirety of her first run for the seat in 2016. In the House races, the state’s three Democratic incumbents spent more than $6.4 million combined, a significant jump from the $3.1 million they collectively spent during the third quarter of 2018.

Republican challengers trailed distantly in spending. Laxalt recorded a little more than one-fifth as much spent as Cortez Masto ($4.3 million).

Despite the spending disparity, Cortez Masto ended September with only a slight cash advantage, holding a little more than $5 million in her campaign war chest to Laxalt’s $4 million — by far the closest cash-on-hand figures in any of the four competitive federal races.

Leading the way in spending among Republican House candidates, District 4 candidate Peters doled out nearly $630,000 last quarter in his bid to unseat Horsford. But he was still outpaced in spending by a margin of more than 3 to 1 by Horsford, who spent nearly $2.3 million.

In the District 3 race, widely regarded as a prime pickup opportunity for national Republicans, Lee spent nearly nine times as much as Becker. After depleting much of her campaign cash in pursuit of a primary election victory in the second quarter, Becker spent just $293,000 in the third quarter, a far cry from the $2.5 million Lee recorded in spending.

But both sides have been boosted significantly by outside spenders, primarily super PACs associated with House Democrats and House Republicans. As of Oct. 12, the District 3 race has seen $27 million in general election ad spending, according to data from the political ad tracking firm AdImpact. That’s tied for the most expensive in the country among House contests rated as “toss-up” races by the nonpartisan Cook Political Report.

Becker entered October — and the final sprint to Election Day — with $600,000 in cash on hand, leaving her closer behind Lee ($1.2 million in cash) than her fellow House Republican challengers are behind their opponents.

In District 1, Titus spent big in the third quarter. Her nearly $1.6 million in spending was more than she’d burned through in any election cycle since 2010, when she ran in the historically more competitive District 3.

It also marked a major advantage over Robertson, who spent just $253,000 during the quarter, leaving him with less than $300,000 in cash at the end of September.

Similar to the candidates in the District 3 race, Titus and Robertson have also benefited from significant outside spending. The “toss-up” race ranks among the 12 most expensive general election House races, in terms of ad spending, according to AdImpact.

Despite strong cash advantages for Democratic candidates, their fundraising and spending activities have paled in comparison to the throughput of money coming from super PACs. These independent groups have the ability to raise and spend unlimited amounts of money in support of or opposition to individual political candidates, though they are restricted from coordinating such expenses with the candidates.

This year, the outside groups have made their mark, collectively spending more than $100 million across the three competitive House races and high-profile Senate race, according to data compiled by OpenSecrets, a nonprofit research group dedicated to tracking money in U.S. politics.

In the cash-hungry Senate race, the Club for Growth — a Republican-aligned super PAC that has endorsed Adam Laxalt — has contributed increasingly large seven-figure ad buys, often attacking Laxalt’s opponent, Cortez Masto. As of Sept. 29, tracking by AdImpact found the group had dropped at least $10.5 million on ads in Nevada for the general election alone.

Similarly, a group linked to Senate Minority Leader Mitch McConnell (R-KY), the Senate Leadership Fund (SLF), has long been among the most aggressive outside spenders in the Nevada Senate race. By August, the group had spent a cumulative $15 million, with another $6 million committed in September as the group expanded its advertising buys, according to tracking by AdImpact.

The spending spree comes in part after record fundraising by SLF, totaling $111 million in the third quarter.

For the Democrats, the biggest outside spending has likewise come from one major super PAC: Senate Majority PAC. The Democrats’ chief non-party fundraising arm, SMP had already spent $23.8 million in Nevada as of August. Nationwide, SMP has routinely emerged as one of the largest — if not the single largest — spender in the four most competitive Senate races, with AdImpact tracking showing $27 million spent across those four contests in the month of September alone.

In the House races, the Congressional Leadership Fund (CLF), a Republican super PAC connected to House Minority Leader Kevin McCarthy (R-CA), has been the biggest spender. Through mid-October, the group has spent more than $6 million to assist Becker in District 3, followed by more than $4 million to support Robertson in the District 1 race.

But the CLF has not spent any money to support Peters. Amid the lack of outside help, the Cook Political Report recently adjusted its rating of the District 4 race from “toss up” to “lean Democrat.”

Helping out the Democratic incumbents, the House Majority PAC has shelled out roughly $2.2 million in each race. That spending has been supplemented by the Democratic Congressional Campaign Committee, which has spent more than $3 million across the three races together.

In several cases, Republican-aligned super PACs that have spent millions of dollars on ads on Nevada’s tight congressional races have received major contributions from wealthy mega donors with close connections to the Silver State.

Miriam Adelson, the widow of deceased casino magnate Sheldon Adelson, who often made waves as one of the country’s most prolific Republican donors, contributed $10 million to the CLF, a super PAC that has supported Republican House candidates in Nevada with roughly the same amount of money.

The group has received similar contributions from other billionaires, including $10 million in June from Timothy Mellon, a businessman and the chairman and majority owner of Pan Am Systems. Mellon also contributed $2 million to the Battle Born Values PAC, a group that supports Laxalt.

Robert Bigelow, a wealthy Las Vegas-based hotel magnate who has spent millions of dollars to support state-level candidates in Nevada, contributed $5 million to the pro-Republican Morning in America PAC last quarter. The group has reported spending more than $4 million to support Republican candidates in the races for Senate and Districts 3 and 4.

Bigelow also contributed $3 million to a group called All for Our Country, which has reported spending nearly $1 million on supporting Republican candidates in the Districts 3 and 4 races.

Democratic super PACs often raised large sums from major trade and labor unions, and throughout this cycle, have pulled in significant amounts from small-dollar donors.

With so much money flowing into Nevada’s races, candidates and PACs are relentlessly flooding the television airwaves and digital spaces with ads.

Once again, much of the spending on ads has come from outside groups. But in the Senate race, where Cortez Masto and Laxalt have raised orders-of-magnitude more money than all other candidates, the approaching general election has triggered a spike in candidate spending on ads.

Cortez Masto spent the bulk of her money last quarter — almost $16 million out of $20 million total spent — on advertising, with most of that money (more than $12 million) dedicated solely to spending on television.

Laxalt has spent comparatively little, roughly $2 million combining radio and mailers in addition to television and digital — often marked in his report as “media advertising.” However, Laxalt’s ad spending in the general came much later than Cortez Masto, with the Republican only releasing his first ad on Aug. 22 (Cortez Masto, by contrast, released her first general election ad the day after the primary election in June).

He has since ramped up his advertising operation, releasing four new campaign ads last week alone. The cost of those ads is not yet clear, pending a final campaign finance report later this month ahead of the general election.

In the state’s House races, AdImpact has tracked $55 million in general election ad spending. That includes more than $2.1 million in ad spending from Lee, who launched a pair of new television ads in September.

With candidates still sitting on millions of dollars just weeks away from Election Day, the abundance of ad spending is set to continue apace through Nov. 8.

Editor’s Note: A version of this story appears in Indy 2022, The Nevada Independent’s newsletter dedicated to comprehensive coverage of the 2022 election. Sign up for the newsletter here.