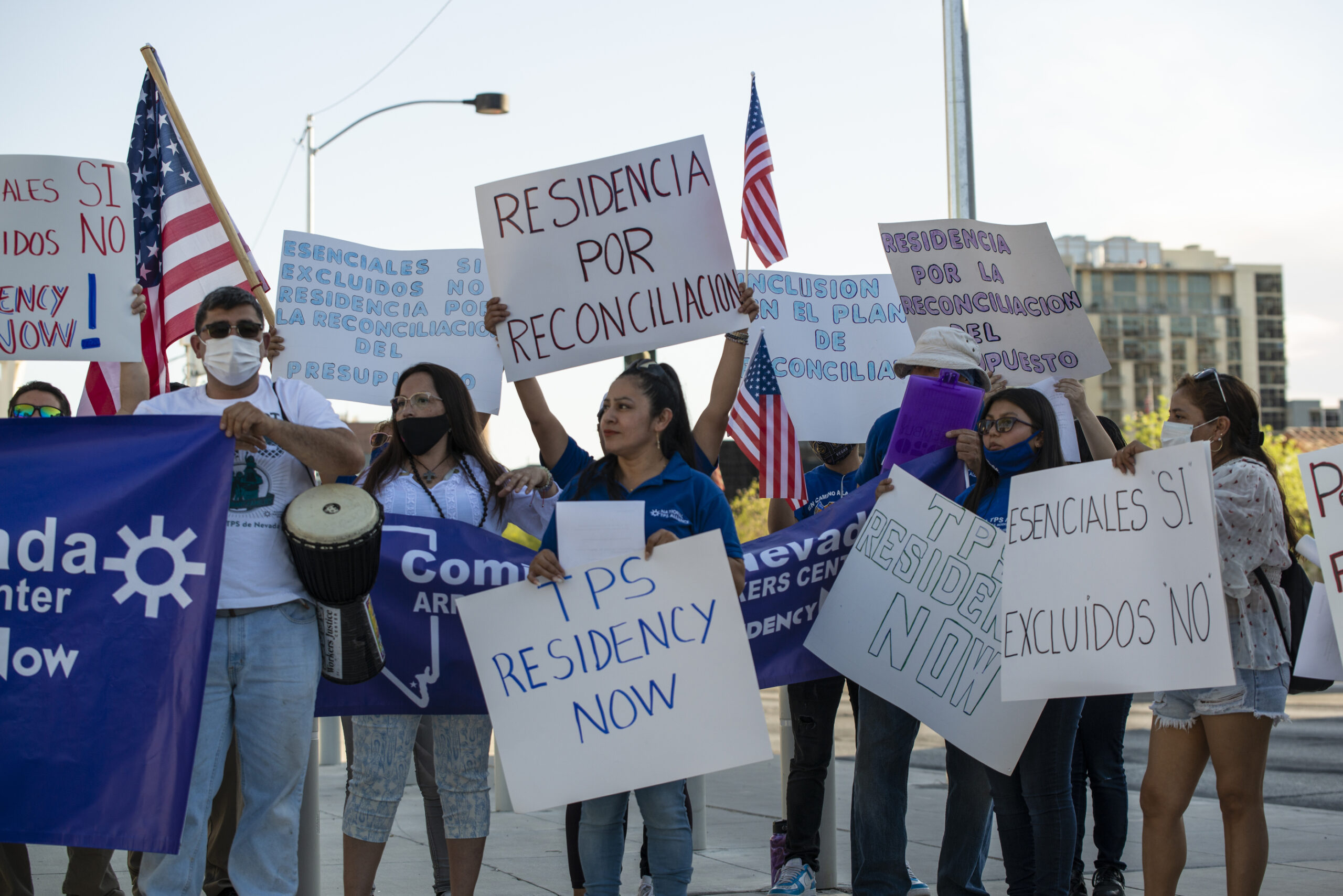 After two failed attempts to get an immigration provision included in Senate Democrats' social safety net bill, Sen. Catherine Cortez Masto (D-NV) said she remained confident that Democrats would ultimately propose one that will pass muster with the U.S. Senate's parliamentarian.

“This is an important issue that has to be done in the reconciliation bill,” Cortez Masto said in a recent interview. “This is our best shot at getting it done.”

Cortez Masto is part of a group of Senate Democrats, led by Senate Majority Whip Dick Durbin (D-IL), making their case to the parliamentarian, the arbiter of whether the immigration and other proposals conform to the Senate's arcane budget rules.

“We're going to do everything we can really to address immigration reform,” Cortez Masto added.

She called for addressing the status of those brought to the country illegally as children, known as DREAMers, and those receiving Temporary Protected Status (TPS), which allows people from countries plagued by wars or disasters to stay in the U.S temporarily.

About 12,000 DREAMers in Nevada participate Deferred Action for Childhood Arrivals (DACA),a federal program that protects eligible undocumented immigrants from deportation and allows them to work.

Another 4,000 Nevada residents participate in the TPS program.

Cortez Masto also wants any reform provision in the bill to address the status of farm and other essential workers, many of who are undocumented.

Sen. Jacky Rosen (D-NV) also backs an immigration provision in the Democrats' spending bill, known as the Build Back Better Act, which could provide about $2 trillion for paid family leave, child care subsidies and other Democratic priorities.

“Senator Rosen continues to strongly support the ongoing efforts in the Democratic caucus to look at all options to include immigration reform in reconciliation, and the caucus has been preparing a number of scenarios for the parliamentarian to consider,” her office said Friday.

To pass the Democrats' signature measure—which stands little chance of winning GOP votes— Democrats are using the budget reconciliation process. That allows the Senate to pass the bill with a simple majority and avoid the need to win over the 10 Republicans to overcome a filibuster under the 50-50 divided Senate.

But it also means that all 50 Senate Democrats must support the provision and overall bill. After initially disagreeing on the total cost and scope of the package, Democrats in both chambers are currently negotiating aspects of the measure to try to get to an agreement by the end of the month.

Cortez Masto and the Democratic senators are expected to soon present their third immigration proposal to the parliamentarian, which would allow the Department of Homeland Security (DHS) to use its so-called parole authority. Both the House and Senate return from recess next week.

Under DHS parole, eligible undocumented immigrants would be protected from deportation and allowed to work. But they would not have a pathway to citizenship.

According to existing immigration law, the agency has broad discretion to provide parole, whether for humanitarian reasons or "significant public benefit," according to the American Immigration Council, an immigrant rights group.

Parole would protect more than 130,000 immigrants in Nevada, according to the liberal Center for American Progress. The proposal would cover more than 7 million people around the nation.

On a call with reporters Wednesday, Lorella Praeli, co-president of the immigrant advocacy group Community Change Action, said that DHS parole could be an appealing option, but more specifics are needed.

“I think a lot of depends on the details of what the parole language would look like,” Praeli said. “But we are committed to delivering for people this year.”

Her comments came as immigrant rights groups rallied outside the Lloyd D. George Federal Court building in Las Vegas to call on Congress to provide a path to permanent residency through the reconciliation process.

At the event, dubbed "Democrats Keep Your Promises" and organized by Arriba Las Vegas Workers Center, TPS holders and others voiced their frustration that the Democratic majority has yet to deliver for those with uncertain immigration status, who typically have citizens in their families and immediate circles.

First used in 1980, reconciliation was initially designed to allow Congress to reduce the deficit by changing tax and spending more easily. But the appeal of passing legislation that could not be filibustered drew ever-increasing attempts to include policy changes that did not have much of a budgetary impact.

So in the mid-1980s, the Senate adopted a rule known as the Byrd rule for Sen. Robert Byrd (D-WV), its chief sponsor, that essentially required any reconciliation provision to first and foremost impact the budget. (Congress codified the Byrd rule in 1990.)

The Senate parliamentarian, currently Elizabeth MacDonough, is tasked with, among other responsibilities, judging whether reconciliation bills abide by the budget rules—a process known as the Byrd bath.

Senate Democrats initially sought to provide a path to legal permanent residency for about 7 million people around the nation, including nearly 113,000 in Nevada, at a cost of about $140 billion over 10 years.

McDonough rejected the plan on Sept. 19, arguing that the policy change outweighs the budgetary impact.

On Sept. 29, she rejected the Democrats’ second proposal. Democrats sought to change the date of a 1929 law, known as the registry. The registry allows for undocumented people who have been in the country since 1972 to apply for lawful permanent resident status. The date has been changed four times since 1929. The last date change took place in 1986.

That proposal was estimated to cost about $140 billion over 10 years and affect about 6.8 million people, including nearly 129,000 in Nevada.

Again, the parliamentarian ruled that the proposal outweighed the budget effect.

In an interview, former Senate parliamentarian Frumin said that one way to get her approval would be to beef up the budget impact. There is likely a way to help the undocumented, he said, but it's unclear if a comprehensive immigration reform proposal could be crafted in a way to pass muster.

“I would go into her with anything where there is a direct impact on the federal bottom line, whether it's visa fees, whether it's direct taxes, tax credits, tax incentives, tax disincentives, with respect to people, as they exist currently,” Frumin said.

“I think that one could argue, at least on the face of it, that those are legitimate budgetary proposals,” he continued. “Whether you can achieve any kind of meaningful immigration reform, doing that simply with budgetary resources remains to be seen.”

McDonough was Frumin's "right hand" during the two stints that he served as chief parliamentarian—one between 1987 and 1995 and another between 2001 and 2012.

“Elizabeth, of all people, having worked as an immigration attorney, gets it,” Frumin said, adding when there is a lot of argument on a proposal, it’s typically not about budgets.

Cortez Masto and immigrant advocates point to four other times when immigration provisions were used in reconciliation bills with little effect on the budget compared to what Senate Democrats have so far offered.

But those proposals were likely not contested, which would be needed to establish a precedent, according to Bill Hoagland, a vice president with the Bipartisan Policy Center and former Republican Senate Budget Committee staffer.

“I can see their frustration,” Hoagland said. “But as it stands today, there is no precedent for the those those previous pieces of legislation in reconciliation bills.”

Hoagland worked on 17 of the 22 reconciliation bills that have become law.

Immigration advocates have urged the move, if necessary.

“They can do it through the parliamentarian, or they can do it by disregarding her advisory opinions and affirming that legalization does not run afoul of the Byrd rule,” Praeli said Wednesday. “Either way, we expect them to deliver.”

But both Hoagland and Frumin said they hope it doesn’t come to that because it would set up a volatile situation for the Senate and governing in the future.

“Be careful what you wish for because if there's a switch in the Senate, then we could see these [laws] ping pong back and forth,” Hoagland said. “And I don't think that is good for long-term sustainability of public policy provisions. I think we need sustainability and consistency.”

Meanwhile, the House interrupted its recess to return Tuesday and approve legislation to raise the statutory debt through Dec. 3. Prescient Joe Biden signed the legislation Thursday.

The deal sets up a clash over the debt and funding the government. Congress will have to act by Dec. 3 when the current stopgap spending bill expires or face a government shutdown. The nation isn’t expected to hit the debt ceiling until roughly February, but raising the limit will be part of that debate.