Indy Explains: BLM laws might complicate the county's quest to open schools for community use 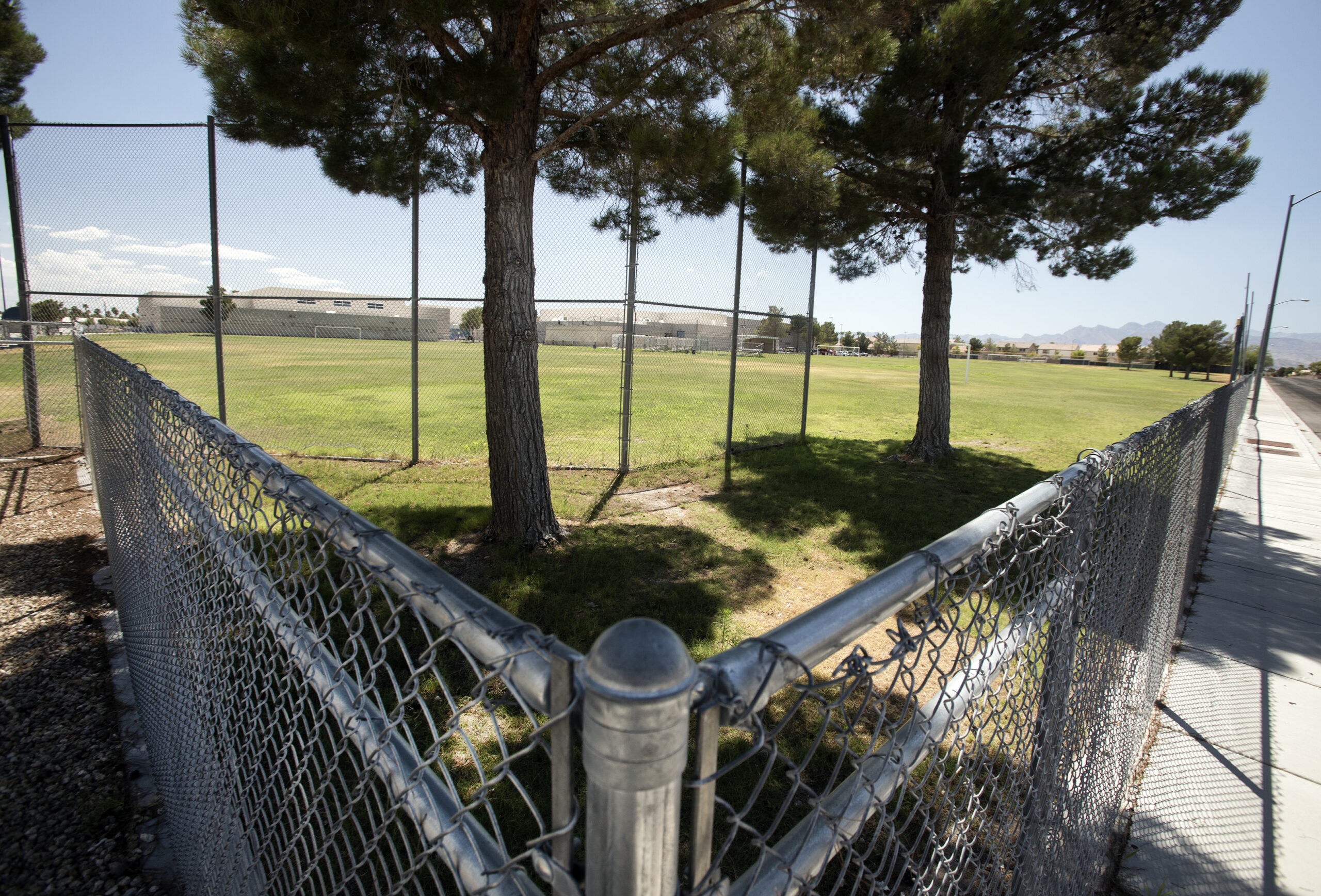 If children want to frolic on school playgrounds after hours, should they be allowed? What about teens hoping to shoot hoops on basketball courts? Or seniors needing a track for walking exercise?

These questions are at the heart of a years-long debate in Clark County. As it stands now, gates and fences prevent entry at many schools, which critics argue put a taxpayer-funded resource off limits. The issue surfaced again last month when the Clark County Commission and Clark County School Board of Trustees held a joint meeting. Commission Chairwoman Marilyn Kirkpatrick got right to the point while kicking off the discussion.

“So we want to use your schools because we feel they belong to the community,” she said.

Clark County School District officials say the problem is a third party in the mix — the federal government. Language in the county’s public lands bill could change that dynamic, though.

Ninety-seven existing or planned Clark County schools sit (or would sit) on federal land, which is under the purview of the Bureau of Land Management. They’re spread across the Las Vegas Valley and include varying sizes of acreage. Orr Middle School, located behind Boulevard Mall, occupies five acres of BLM land, while Centennial High School in the far northwest valley sits on 40 acres. Southeast Career and Technical Academy resides on the most federal land — 50 acres.

It’s a symptom of running a school district in a state where the federal government owns and manages roughly 85 percent of land. And even though Las Vegas is by far the most populous part of the state, BLM land rings the suburban area and, in some cases, protrudes it.

“You can’t just go and build on it,” said Linda Perri, director of real property management for the school district. “There’s a whole process that takes about two years.”

The Recreation and Public Purposes Act authorizes the federal government to sell or lease public lands to state and local governments or qualified nonprofits for uses such as schools, hospitals, fire stations, municipal facilities, parks and fairgrounds. Gaining approval, however, is a time-consuming process that involves an application, a notice and public comment period, environmental analyses and review by BLM officials in Nevada and Washington, D.C., Perri said.

In fact, last month the BLM published a notice seeking public comment on the school district’s bid to lease 30 acres near Levi and Erie avenues in southwest Las Vegas. The site eventually would house a middle school.

“The BLM is pleased to have a role in the development of educational facilities that will help the local community grow,”Shonna Dooman, Las Vegas field manager, said in a news release.  “The action will help Clark County School District increase educational opportunities for residents.”

The 45-day public comment period for the proposed middle school offers a glimpse into the behind-the-scenes work that goes into securing federal land for educational purposes. The upside: It’s cheaper than buying private land.

District officials said it costs $10 per year per acre to lease land from the BLM. Once a school is built, the lease becomes a patent and the district pays a one-time fee of $100 per acre.

The land use comes with certain stipulations. Because it’s still BLM property, any revenue generated must go back into the site and any changes must be approved, Perri said. For instance, schools that want to develop gardens or build additions on BLM land need the green light to do so.

So how does this all affect community access to school grounds or buildings?

Perri said the BLM would need to review the district’s leases and patents and sign off on such use.

The commission chair expressed confidence that hurdle can be cleared. Kirkpatrick said the county isn’t asking schools to remain unlocked 24 hours a day and argued that the change would not alter the spirit of the agreements, as the land would still be used for public purposes.

“What I can tell you is that we spoke to the BLM immediately after the meeting and we addressed the concern with them,” Kirkpatrick said, “and they seem to think [the change is] something reasonable to allow community use and they would be more than helpful to ensure that we could navigate the process in a timely fashion.”

The conversation about schools and community use has highlighted the role the BLM plays in local government operations, especially in Southern Nevada.

Although local entities have good relationships with the BLM, federal ownership of the land creates occasional operational challenges, said Steven Parrish, general manager and chief engineer of the Regional Flood Control District. Even rain can pose a hazard. If flash floods wash debris and sediment into detention basins, some of the agency’s leases with the BLM require an approval process before removing the materials, he said.

In Mesquite, parking at a special event complex is complicated by BLM land, he said. The complex sits on two tracks of land — one of which is under a BLM lease — so whenever there’s an event that charges for parking, all vehicles must be on the city-owned property because of the lease conditions.

But Parrish said the county’s long-awaited public lands bill could solve those issues. The federal legislation, which has been drafted but not introduced in Congress, includes language that would require the BLM to transfer land approved for public purposes to the local governmental entities. The commission approved a resolution seeking the bill last year, despite pushback from some environmental groups.

The land transfer could reduce costs in addition to eliminating logistical obstacles, Parrish said. When the Regional Flood Control District set out to build its 100th detention basin, it initially faced paying the BLM $4.4 million in royalties for excavating minerals that exist on the land. A compromise, however, was reached in this instance because the agency found a nearby BLM gravel pit where it could haul the dirt and soil in lieu of paying the fee.

It’s unclear when the lands bill will be introduced in Congress.

“It would be great to see this pass through (Congress) and get to the president,” Parrish said. “The sooner, the better. It would really solve a lot of problems for us.”

The push to open Clark County schools to the community has considerations beyond the BLM restrictions, though. School district officials have raised concerns about increased maintenance costs if the move results in more litter, vandalism and repairs.

Still, Perri said the district wants to move forward with community use but is awaiting direction from the Clark County Commission and School Board of Trustees. The conversation is playing out in the backdrop of county commissioners mulling a sales tax increase that would benefit education.

The passage of AB309 gave county commissioners the power to increase the sales tax by one quarter of one percent, and the revenue could be used for the following education initiatives: early childhood education, adult education, truancy-reduction programs and teacher recruitment and retention.

Commissioners and trustees discussed opening schools for public use before diving into a conversation about the sales tax during their joint meeting last month.