Indy Q&A: Departing lieutenant governor on her legacy, her successor and her new White House job 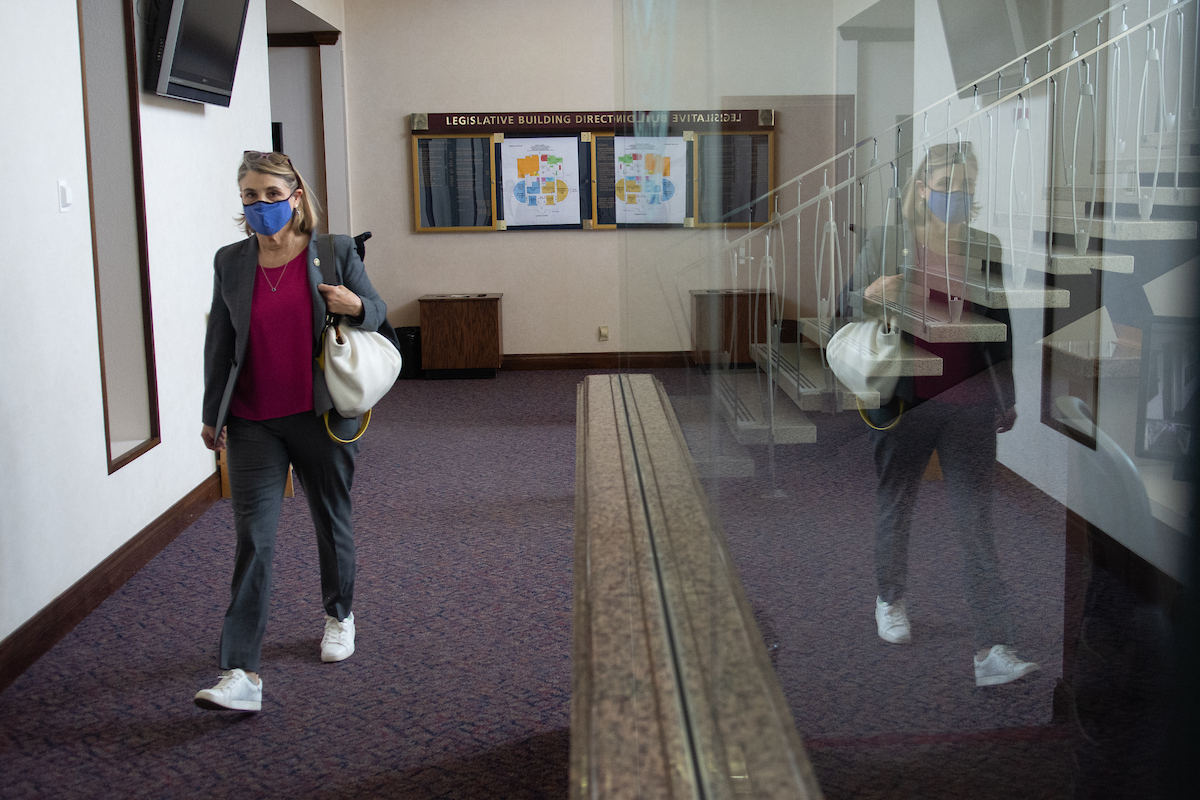 Outgoing Lt. Gov. Kate Marshall said when she got the call about her new gig at the White House, she was sitting straight up, stunned, at attention.

It was President Joe Biden himself.

“I kinda never believed that someone like me would be an elected person, you know?” she told The Nevada Independent in a recent interview. “Or then be able to go to the White House. Who gets that?”

Marshall, a Democrat who was next in the line of succession to the governor’s seat before resigning the job effective Friday, is moving soon to the nation’s capital, where she will begin work in the Biden administration as a senior adviser to governors on how to best work with the federal government. Her departure is drawing interest because the governor will have the opportunity to appoint her replacement.

But she’s also taking the time to reflect on her service in Nevada, where she served two terms as state treasurer, ran unsuccessfully for secretary of state and won the seat for lieutenant governor in 2018.

Here are highlights from The Indy’s exit interview with Marshall. Questions and answers have been lightly edited for length and clarity.

Did you ever aspire to take the governor’s seat?

I did not take the pulse of the governor every time I shook his hand. So no, if that's what you're referring to … I take every office as an opportunity to do what one can and I think if you're just going to go into office to get another office … I don't think you're suited for public service, quite frankly.

Do you intend to run for office again in the future?

I don't put it in the “no” category. This is a very exciting moment for me. And so it's hard for me to see beyond even just to try to get through the first day and hope I do a good job. But my husband and I will definitely be keeping our home here in Reno, and I am a Westerner.

Are you endorsing anyone to replace you as lieutenant governor?

No, that's not my place. I mean, really, it is the governor's appointment. And I will support who the governor appoints. He needs a partner, right? He may have a particular view of what he wants his next four years to look like, and so I give that to him. And then of course after that, then it's up to the voters.

And so nowhere in that process did you see me.

Do you think it's important to have a candidate from a diverse background, or a woman, in that position?

I think it's important for every elected official, if they're not from the background of the person that's in front of them, that they are willing to listen and hear. I think that we come from a very, very diverse community. And those experiences are important. And you're not going to be able to represent Nevada well unless you are open to those experiences.

You will never have all the experiences of all the people you meet. But it can help you to make better decisions. So I think diversity is absolutely critical in this state.

Your office recently announced members of a new Keep Nevada Working Task Force focused on integrating immigrants into the Nevada economy. What is your vision for that group?

This country has done, I think, a remarkable job with people being able to make a home here, whatever their culture, whatever their language, whatever their dreams. And I think more recently we have dropped the ball in that regard. We used to go to libraries and learn English, right? And there were all these things that we as Americans did.

I'm not saying that there weren't failures. There's always failures. But we certainly embarked on this with an appetite that I don't think exists in other countries.

And so in my mind, part of the Keep Nevada Working Task Force is to put people on a panel and let us try to see what we can do to further prosperity in immigrant communities. And that really requires a more comprehensive view of things, right? It's not just education, it's not just finding a job, it's not just health care, it's all of it.

So maybe a goal is infant mortality, or maybe a goal is with third grade reading achievement. It depends on the community. And I don't think it is my place to tell them what their goals ought to be. But to basically do that, so that then you have a measurable way to say, what kind of progress are we making? And hopefully moving forward.

I envisioned the committee making recommendations about immigration policy. Is that your vision?

And so getting them to come together on what we measure is for them to do. And I think you may find some surprises, right? You can go in thinking it's all about the workforce, and they can come back to you and see and say to you it's all about daycare. And so that's where it's not up to the elected official. You try to facilitate the conversation so that people can tell you what their priorities are.

How can you ensure that the Legislature will take these recommendations and bring them to fruition?

You chaired Nevada’s Complete Count Committee. Do you believe the census was a success?

We didn't let up. I remember there was one point where they were coming on to that last weekend. ... And we wanted to have an outreach weekend in Vegas, and across the state, but definitely in Vegas. And the Census Bureau called us and said, “We're not going to be able to do this.” And I got on the phone and I said, “You are going to be able to do this. We will do this. And you will be there. And I expect to see you when I get there.”

And I called every single mayor ... and I said, “If you are not out there getting your people to fill out the census, I want to come make a personal visit because I need you and you know how important this is.” And mayors really know how important it is because it’s resources, right? And Nevada is a net exporter of taxes, and so grabbing that money that we already put into those coffers to come back to Nevada is very, very important.

As the lieutenant governor, you're the head of the Nevada Commission on Tourism. Is there anything that you feel like is left undone trying to get people out into the rurals and show them that that's a tourist destination?

We're also working on a trail Institute in Ely, where we would basically certify people so that they could work on creating, maintaining, drawing, and planning trails. You could draw people from all over the country to go to that trails Institute.

And lastly, my plan for my state parks. We have 27 state parks in Nevada, and I worked with state parks and a lot of different stakeholders to take care of the deferred maintenance, upgrade them, make them more accessible. What's always important in a state park is the restroom. So make sure that all these things can be used and used by many.

And so we put in for about $180 million of [American Rescue Plan] funding in the governor's framework. And so I hope that that goes forward. It will be a lifetime legacy to have all our state parks upgraded.

Any state park that you would recommend?

The Kershaw-Ryan State Park in Caliente is another place that you can see dark skies with the naked eye. It is a little oasis there. It's never too hot there. And there's a little place where ... there's little bricks for every legislator. It's just very unique. I would recommend going.

What will you be bringing to the Biden administration?

I have worked in the federal government (in the U.S. Department of Justice), and I've worked in state government. And so I see the differences. And I understand, for example, at least Nevada's budget, how a lot of the interactions are between state agencies and the federal monies, they get where the glitches are.

For example, I was just at a [Nevada Department of Transportation] board meeting this morning, and they got $33 million in the August redistribution because we spent all of our federal dollars. So other states are losing money, because they didn't spend all their allocation. So these kinds of things that people at the federal level may not have in front of mind and the various difficulties that states need to communicate so that they can do what they need to do on their side.

Now of course, with COVID with wildfires with Afghan evacuee resettlement, these kinds of things really will require coordination.

What advice do you have for your successor?

You are on very many boards. Only the governor is on more boards than the lieutenant governor. And if you wanted to solely occupy your time with those boards, you could, but there is an opportunity to step into those spaces that need attention.

And we got 17,000 books there into that community and filled the school, filled the library. And they were able to give books to parents who couldn't afford books for their children. And the parents were around the school block, waiting to go in and get books.

This opportunity to step into spaces — and the governor doesn't have the time to do that — so the lieutenant governor position is such that you can meet your passion there.

Do you think the structure of the position needs to be changed in any way? It’s technically part time.

I guess it hasn't been for me, but maybe that's the nature of the person. I think that that job should be more than full time if you're going to do those things well.

I tend to call my staff on Sunday nights and say, “This is what I know, here's the questions I have for the following week.” They always answer. I don't think that's what most people consider when they consider a part-time job because I'm starting the week on Sunday.

What was the most gratifying part about being lieutenant governor?

Anything else you want to add?

When I was treasurer, I received this invitation to a White House Christmas party. And I told my daughter, “Oh, no, honey, that's not real. I think they just send those things.” And my daughter keeps saying to me, “It is real.” I said, “No, it's not real. You don't even have people like me, go to the White House. I wouldn't even know where to go.”

And it turned out it was real. It's just like, who gets this stuff? It's amazing. It's an honor to be able to serve. You can't even imagine how wonderful it is to serve people.