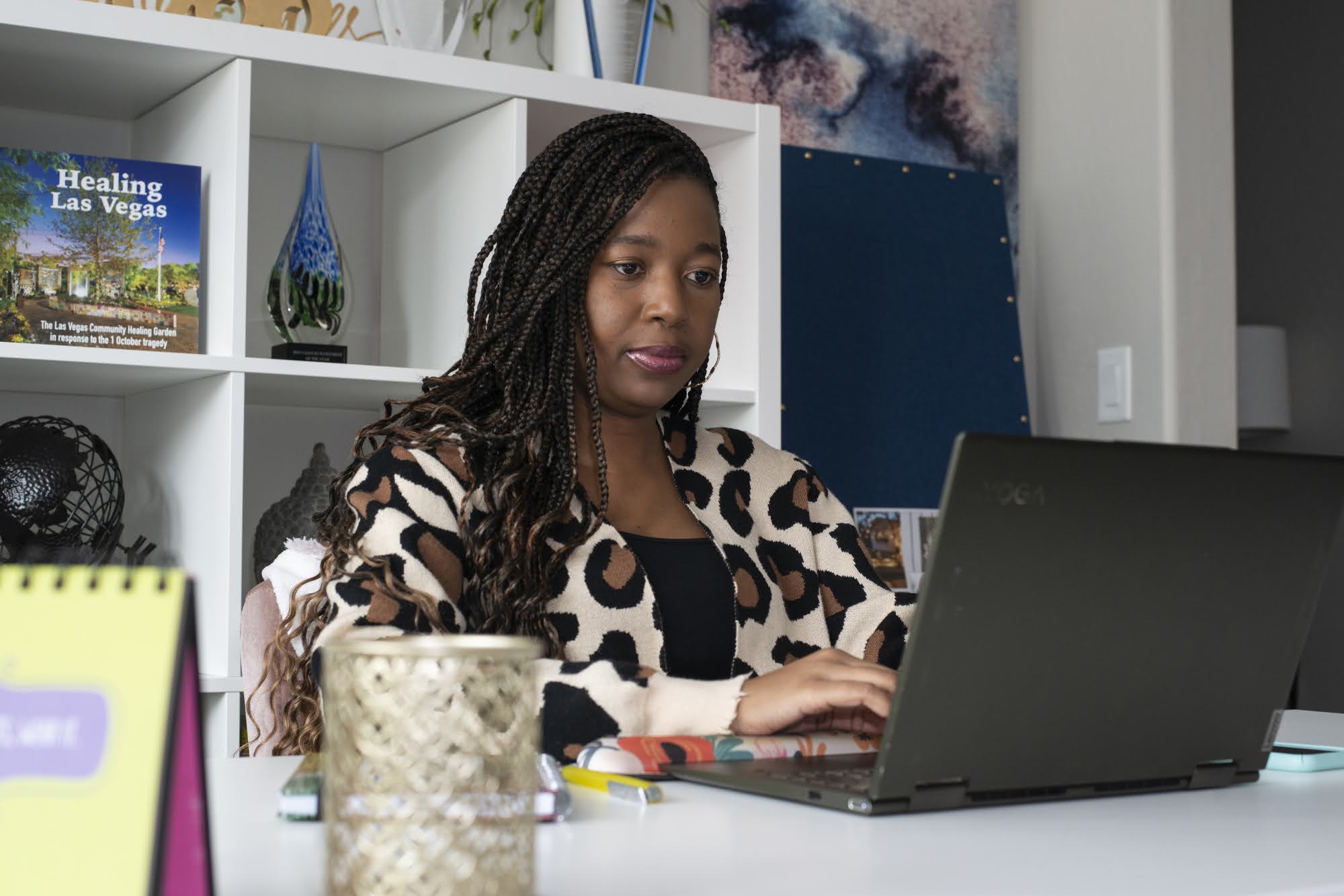 When Shanta Patton discusses the gap between Black and white homeownership rates, she starts with the game of Monopoly.

It's as though for more than 400 years, your opponent has been able to go around the Monopoly board without ever giving you a chance to play, she said. Then, suddenly, you're allowed to play, but you don't have the accumulated wealth, knowledge or properties to keep up with other players.

"It's equality, because I can get on the board, but it's not equity," Patton said. "I'll never catch up."

As a real estate agent and certified U.S. Department of Housing and Urban Development housing counselor, Patton has experienced the barriers to homeownership facing Las Vegas’ Black community firsthand and is looking to help even the playing field through the Las Vegas Coalition to Make Homes Possible, a public-private partnership backed by the tech real estate company Homie and focused on helping 25,000 Black families into homeownership over the next decade.

The coalition, consisting of various organizations and community leaders, is working to connect the Black community with resources and information to overcome barriers to Black homeownership that include a lack of capital for down payment and closing costs, inadequate access to credit and poor credit history, insufficient financial literacy and lack of knowledge about the home buying process.

"Homeownership and buying property is a long game," Patton said, "Even though we are in 2022, we still feel the effects of things that happened back in the 40s, 50s and 60s."

That long game is why more than 50 years after the passage of the federal Fair Housing Act, which outlawed housing discrimination based on race, color, religion, and national origin, the gap in homeownership rates between Black and white communities remains at essentially the same level as it did when the act passed in 1968.

U.S. Census data shows that in 1970, close to 42 percent of Black households owned their own homes compared to around 65 percent of white households. In 2020, that number was 45 percent, almost 30 percentage points lower than the rate for white citizens.

In Las Vegas, the gap is similar: As of 2019, the homeownership rate for white people was around 70 percent and 42 percent for Black people. It’s a gap that scholars and historians say was produced by decades of discriminatory housing policies and racist lending practices.

Claytee White, an oral historian and the inaugural Director of UNLV's Oral History Research Center, said disenfranchisement of the Black community has been a constant presence throughout the nation's history.

But the root causes of barriers affecting Black homeowners are grounded in the historical exclusion of people of color from government programs and the practice of refusing to insure mortgages or approve loans on homes in and near Black communities — a policy known as "redlining."

In the mid-1930s, when Congress established the Federal Housing Administration (FHA) and rolled out programs to increase home-buying opportunities, African Americans and other people of color were left out of the plan. Some of the programs explicitly excluded people of color through requirements stipulating that homes built with subsidies from the FHA could not be sold to Black families. Homeownership programs geared to veterans allowed banks to deny mortgages to Black veterans, and Black real estate agents were kept out of the National Realtors Association through policies that allowed for the exclusion of members based on race and sex.

White said African Americans who migrated to Las Vegas during World War II for work had high incomes, including earning good money working at the Basic Magnesium Incorporated plant for the U.S. government. Still, they struggled to purchase homes because they could not qualify for housing programs or receive loans, and were effectively barred from living in white neighborhoods.

"So they had to build their own homes. Our community looks different from any other community because of that today," White said. "There was no sewage, streetlights or sidewalks until the mid-1950s. Starting like that means that you just don't have the ability to keep up. Your community doesn't look as good, and even when haphazardly you begin to get those amenities, it just doesn't compare with a new community in a white neighborhood."

Tyler Perry, an assistant professor of African American and African Diaspora studies at UNLV, said as Las Vegas' Black population grew, white developers and other power brokers effectively relegated the Black community to one area of the city west of the railroad tracks.

"The Westside was, from its inception, designated as an underdeveloped area," Perry said. "There were very few sidewalks, a number of people lived in what were described as shacks and slums. And the other thing to note is that it wasn't even based upon class. The Westside was essentially, at least according to studies in the 60s, a mixed-income area."

Perry said that negative stereotypes led to an indifference outside of the Black community that resulted in less investment into the area's infrastructure, schools, and neighborhoods. He noted that discrimination, redlining and other segregationist practices had long-lasting effects on residential patterns, neighborhoods' economic health, and household accumulation of wealth in Las Vegas and cities across the country.

Despite her time in the industry, she experienced the barriers many of her clients face after her divorce. She scrambled to find a place for her and her three children, eventually landing on a rental home.

Close to two years later, her landlord sold the house. With poor credit and eight rental denials (because of income fluctuations), she was unsure of her next steps. Luckily, a friend helped connect her to resources including a Nevada grant that helped cover closing costs and housing counseling that allowed her to buy a home.

"I started using resources that I knew were out there, but never once thought it was for me," Patton said. "I've never had relief like that until I moved my kids into a home that was ours that we wouldn't have to ever move out of unless we chose to do that."

The experience showed her that resources are available to help Black potential homebuyers, but that a lack of outreach and trust remains a stubborn roadblock between organizations and the Black community.

So when Homie, a real estate company with a significant presence in Las Vegas, approached Patton about finding a way to help close the homeownership gap in Las Vegas following the height of the George Floyd protests in 2020, Patton was intrigued but skeptical.

"I grilled them for at least the first 30 days, looking for the holes," Patton said. "I've been in this community almost my whole life. [Community members] know me and they trust me and whatever we say we're going to do, that's exactly what we are going to do."

Elias Benjelloun, a social impact manager for Homie, said the company wanted to use its real estate knowledge and connections to address the historic repression of Black communities.

“[The George Floyd protests against police brutality and racism] really caused us at Homie a moment of pause … We took a moment to really evaluate ourselves and our role in racial equality in America,” Benjelloun said.

What followed were numerous conversations that eventually led to the creation of the Las Vegas Coalition to Make Homes Possible and the goal to get 25,000 Black families into homeownership in Las Vegas over the next 10 years. The coalition aims to connect Black families with existing homeownership resources and programs.

Patton said she and other organizers decided to have a 10-year goal because it can take years to catch up on student loan payments or reach financial stability. She added that the coalition's goal is to build long-term generational wealth, not just help those who are ready to purchase a home.

Four of the coalition's five leaders, including Patton, are African American women. Patton said this shows the integrity of the initiative and helps her and other organizers target messaging and efforts to reach out directly to the Black community.

One program the coalition aims to connect families with is the state’s Home Is Possible down payment assistance program. The program includes a homebuyer education course and offers a three-year, no-payment, no-interest, forgivable loan that helps homebuyers with up to five percent of the home loan amount. A portion of the loan is forgiven one month at a time for three years until it no longer remains. The loan acts as a second mortgage and is designed to incentivize buyers to stay in a newly purchased home.

"Currently, we have been programmed to understand that if the messaging does not say it is for us, to keep moving on," Patton said. "None of us are new to this, but to the community, we are, because they've never been there, because no one's talking to them."

White individuals whose parents purchased or owned a home between the 1930s and 1970s benefited from the redlining of communities. Patton said that home purchases during the period allowed families to have the equity necessary to send children to college or start a business — all of which came at the expense of the Black community.

Homes in Black neighborhoods or owned by Black families are statistically valued at lower prices than ones in white communities. Black workers still make less money than white ones, on average, and there is a significant gap in wealth and education between white and Black populations. But Patton said her work with the coalition is one way she can contribute to closing a 400-year-old gap.

"To truly close the gap of homeownership, we really will have to change policies and the country will have to deal with the fact that for generations, other people benefited off the backs of the Black community," Patton said.