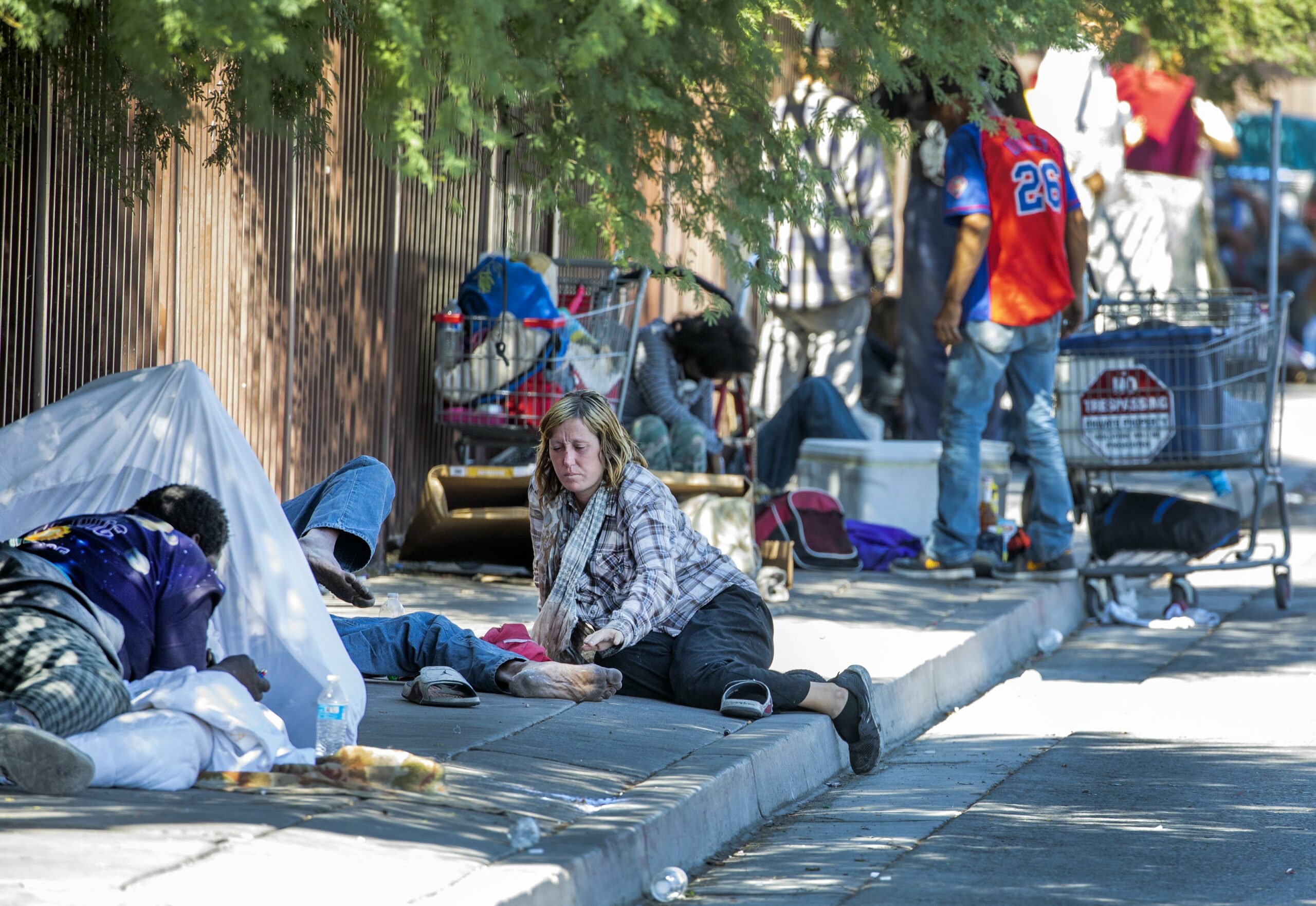 A proposal to make it a misdemeanor to camp or sleep in a public right-of-way in downtown and residential areas of Las Vegas is being met with resistance from a variety of voices, including presidential contender Julian Castro who showed up at City Hall Wednesday to speak to protesters outside.

The Las Vegas City Council proposal would apply if sleeping space is available at the Courtyard Homeless Resource Center or another non-profit service provider in the so-called “Corridor of Hope.” People could be fined up $1,000 or be sentenced to up to six months in jail.

During the council meeting, the ACLU of Nevada, Make the Road Nevada, Faith Organizing Alliance and several other groups gathered in protest.

“We feel that this is the wrong approach to work with our homeless community,” said Lalo Montoya, political director for Make the Road Nevada.

“Criminalizing them is not the way to go about it. Our city is one of the top ten in terms of not having shelters or affordable housing for our homeless population,” Montoya added. “We believe we need to talk about resources for our most vulnerable Nevadans.”

Gerald Gillock, an attorney whose law firm is located in an area the ordinance would be enforced, says he supports relocating homeless people from the downtown area but also said the city needs to take responsibility for providing bathrooms or clean up.

“That enforcement does not include any provisions for the city providing any type of portable sanitation,” Gillock said during the City Council’s public comment period on Wednesday morning.

“What happens is, the homeless sleep on the city street alongside every day, and the city has determined they have a right to be there. But every single one of those people has to go to the bathroom,” Gillock said. “I know the city is doing something with this ordinance, but it’s not all you can do.”

Outside the meeting, Gillock further explained his complaint.

“The ordinance does not require them to put out any bathrooms. Right now, every single day, 18 to 25 people are going to the bathroom in the alley behind my office. Just walk down 4th Street, and it’s a total stench,” Gillock said in an interview.

Gillock is concerned that, with the way the ordinance is written, police can suspend it at their discretion, and his office will continue to experience the same problems.

“All the police have to say is ‘it’s full,’” and it’s full right now. It’s full before the ordinance even starts,” Gillock said. “If [the city] says they have a civil right to be there, then they have to provide the sanitation.”

Gillock was referring to bed capacity in the Courtyard Homeless Resources Center, a city-funded facility that does not provide shelter, but rather a temporary "safe zone" in an open-air area where homeless people may sleep on mats on the floor.

When it came time for the Mayor Carolyn Goodman to introduce the ordinance for discussion, City Council members voted unanimously to proceed without further discussion. The next hearing on the matter will be Oct. 14.

Former Councilman Bob Coffin said on Twitter that the City Council had no choice but to create the ordinance because the Legislature did not approve funding to address homelessness.

“We should never criminalize desperation, whether that is people who have no choice that are living on the streets, or in public rights of way, or immigrants who are seeking a better life in our country,” Castro said to approximately 40 protestors while the new ordinance was being proposed inside the building.

Coffin was unimpressed and said, “[Julian Castro] is woefully uninformed about the problem in our city. He does not realize that our ability to cope with homelessness was severely limited by the Democratic Legislature’s refusal to allow the City of Las Vegas to raise money to expand our facilities.”

Assembly Bill 73, which originally was designed to create a steady revenue stream for homeless services and creation of affordable housing, was essentially gutted through an amendment sponsored by Democratic Assemblywoman Dina Neal that scaled back specifics and asked local governments to create task forces to identify funding sources.