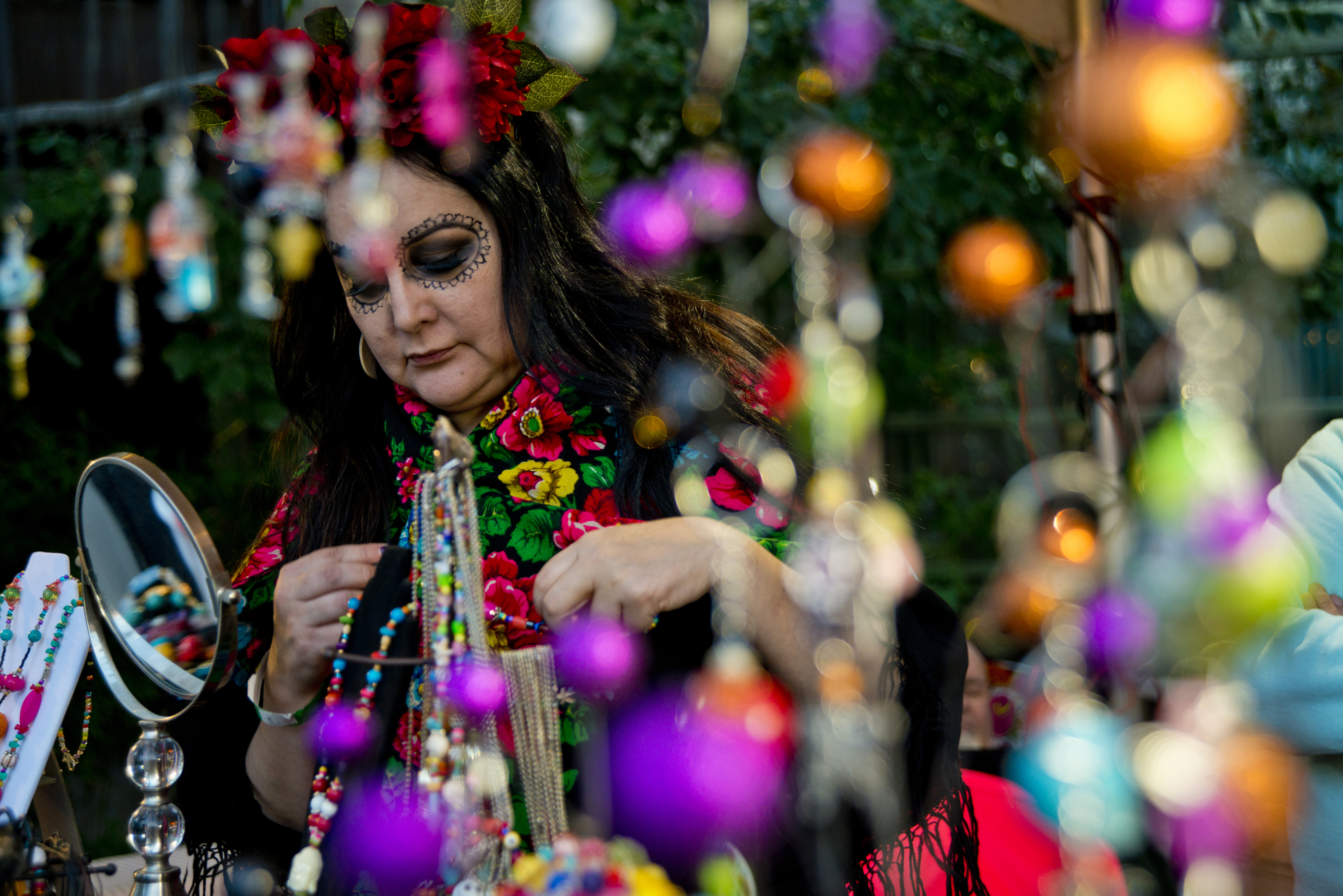 Flowers were blooming on a recent Saturday inside Winchester Dondero Cultural Center as sisters Ana Martinez and Joyce Mayorquin snipped and folded colorful pieces of tissue paper during a workshop. The final step — twisting and attaching a green pipe cleaner to form the stem — brought the paper flowers to life.

The floral creations will decorate an ofrenda, or home altar, commemorating their grandparents on Día de los Muertos, a celebratory day with roots in Latin America that honors those who have passed away. It’s a tradition the sisters are trying to preserve, now with the help of Mayorquin’s 5-year-old son. Her and her husband’s families are from different regions of Mexico.

“In my ofrenda now I’m also incorporating my husband’s family. We blend our traditions, my son is learning both of our cultures, and he’s growing up here,” Mayorquin said. “My parents only spoke Spanish to us and we learned English in school. I got my son to speak some Spanish because of my parents, but he mainly understands English. That’s the struggle going from the first generation to the second generation — you gotta really try to keep it alive.”

Participants worked under yellow, red, orange, blue, pink and purple papel picado banners hanging from the ceilings of the cultural center in Las Vegas, where a free workshop taught attendees about the meaning of ofrendas and how to decorate them for Día de los Muertos.

Nelly Tobón and her husband Eddie Ramos, founders of the Club Migrantes de Uruapan, a nonprofit organization dedicated to the preservation of Mexican culture and traditions, put the workshop together to teach the community, especially younger generations, about the tradition and its importance. Their goal is to create a bridge for Latinos in the U.S. who are geographically separated from family or cultural celebrations across the U.S.-Mexico border.

“My main reason is the kids growing up here, we ought to show them our traditions and their roots,” Tobón said. “It’s so important to keep the meaning of our traditions, they’re sacred. And being hands-on and creative makes it more valuable than going to the store and getting something mass-produced.”

Día de los Muertos, or Day of the Dead, dates back to pre-colonization of the continent, perhaps even earlier. Ancient civilizations, such as the Aztec and Toltec of Mexico, believed the spirits of the dead visited the physical world around this time of year. To aid the dead on their journey back to their families and resting places, they left out food and drinks alongside vividly orange cempasúchil, a Nahua (language of the largest Indigenous group in Mexico) word meaning “flower of twenty petals.”

Ivan Sandoval-Cervantes, a cultural anthropology professor at UNLV, said he’s fascinated by the enduring celebration. It has evolved and expanded throughout time — the latter of which he attributes to migration and, more recently, social media.

“The celebration is bound to survive because it’s so flexible,” he said during an interview with The Nevada Independent. “Because it can mean different things to everyone. It’s connected to something that’s very concrete and that is something we’ve all experienced — the death of someone who’s close to us.”

The celebration has become widely observed across the U.S. in recent years, carried on by immigrant and Latino communities. They assemble altars adorned with photos of their deceased loved ones, food, water, tequila, pan de muerto (bread of the dead), flowers and more.

Sandoval-Cervantes said events like the one organized by Tobón and Ramos help connect community members, who may be far away from their families or the places where loved ones were put to rest. In Mexico, the celebrations create a special opportunity for people to visit with relatives they may not have seen for a long time.

“That's something that's really hard to achieve once you start to uproot yourself or your family and it takes time to resettle and create these roots in a specific place again,” Sandoval-Cervantes said. “So with all of those movements, these sort of communal and community connections sort of become a little bit looser.”

Sandoval-Cervantes said he didn’t celebrate Día de los Muertos much growing up in Ciudad Juarez, which is in the Mexican state of Chihuahua, seven miles south of El Paso, Texas. But now, with a 3-year-old daughter, it’s important to him and his family to incorporate the celebration into their lives every year, too.

“I want her to know not only about the other muertos, but also to feel that there’s a connection with people in her life who aren’t here and who she will never meet in person,” he said. “Where we can imagine or believe that we can communicate with them through ofrendas … showing, ‘I care for you, and I’m doing this for you because it’s the only thing I can do to imagine I’m helping you in the other life.’”

Día de los Muertos celebrations this past month were not only held in Las Vegas. UNR’s Latino Research Center held its annual altar contest over the weekend, and several organizations teamed up to host a festival and theater event in Northern Nevada this year.

In Latin American countries, people build altars within their homes, then go out to the cemeteries to visit the graves of their loved ones, tidying them up and leaving fresh flowers. Urban areas, such as Mexico City, host parades and other regions bring graveyards to life with music, food and people who celebrate into the next morning, ushering in All Saints Day.

Sandoval-Cervantes said there’s a natural tension between the traditionally Mexican celebration of Día de los Muertos and American Halloween festivities, which are celebrated only a day apart. Though the celebrations are unique, they can be enjoyed simultaneously, he said, and some traditions have been mixed or altered.

Take, for example, trick-or-treaters: In some regions of Mexico, children knock on doors asking for treats “para mi calaverita,” meaning, “for my sugar skull.”

“This is often seen as something that’s a product of Halloween, but has a different history that has to do with people asking, during the Mexican Revolution, for money for their dead ones, so they could pay for a funeral,” he said.

It’s unclear how many people died during the decade-long war, but historians estimate that at least 1 million people lost their lives.

Halloween decor often includes skeletons, an image originally used in Mexico as a social critique of the elites during the Porfiriato, a term given to President Porfirio Diaz’s seven-term presidency that catalyzed the Mexican Revolution. His presidency saw a sharp divide between the wealthy and poor classes and was popularly criticized by artist Jose Guadalupe Posada, a political lithographer from Aguascalientes, who used skeletons to deliver his critiques. Posada’s point? Everyone is a skeleton beneath the rags or riches they wear.

“They’ve become so central to Día de los Muertos that it’s hard to imagine they existed for any other purpose,” Sandoval-Cervantes said of the calaveras, or skeletons.

The COVID-19 pandemic will likely have an effect on the celebration, though it’s difficult to tell right now, he said. Last year, Latinos grappled with the magnified loss caused by the virus, which hit the community particularly hard in Nevada and across the U.S.

“There’s going to be more altars, more ofrendas, for older people and younger people who have passed away in the U.S., but also Mexico,” he said. “This might be something that will be incorporated into these ritual practices … [Día de los Muertos is] really easily attuned to things that are happening at the current moment.”

Latinos in the U.S. often dedicate ofrendas to social-political issues, such as immigration reform efforts that would provide greater stability to people protected by the Deferred Action for Childhood Arrivals (DACA) program or by Temporary Protected Status (TPS). This connection and expression has roots in Mexico, said Sandoval-Cervantes, and is not apolitical.

Historically, politicians and officials have been directly criticized through calavera poems, witty and satirical compositions that are delivered on Día de los Muertos. The social-political upheaval experienced in Mexico is hard to ignore on Día de los Muertos, Sandoval-Cervantes said, as people remember the estimated 100,000 people who have disappeared, according to the National Search Committee, or have lost their lives as a result of the ongoing drug wars.