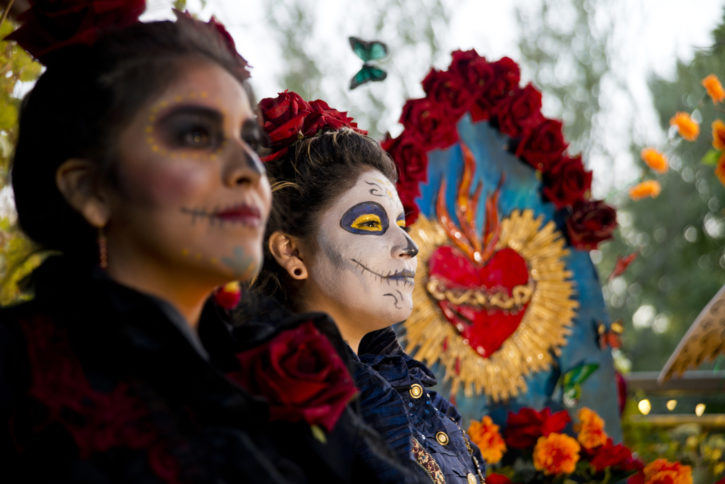 While they painted their faces ghostly white, dressed in costumes and decorated a park with the occasional skeleton or coffin, the crowds celebrating Day of the Dead this week at events across Las Vegas were marking a Latin American holiday distinctly different from Halloween. 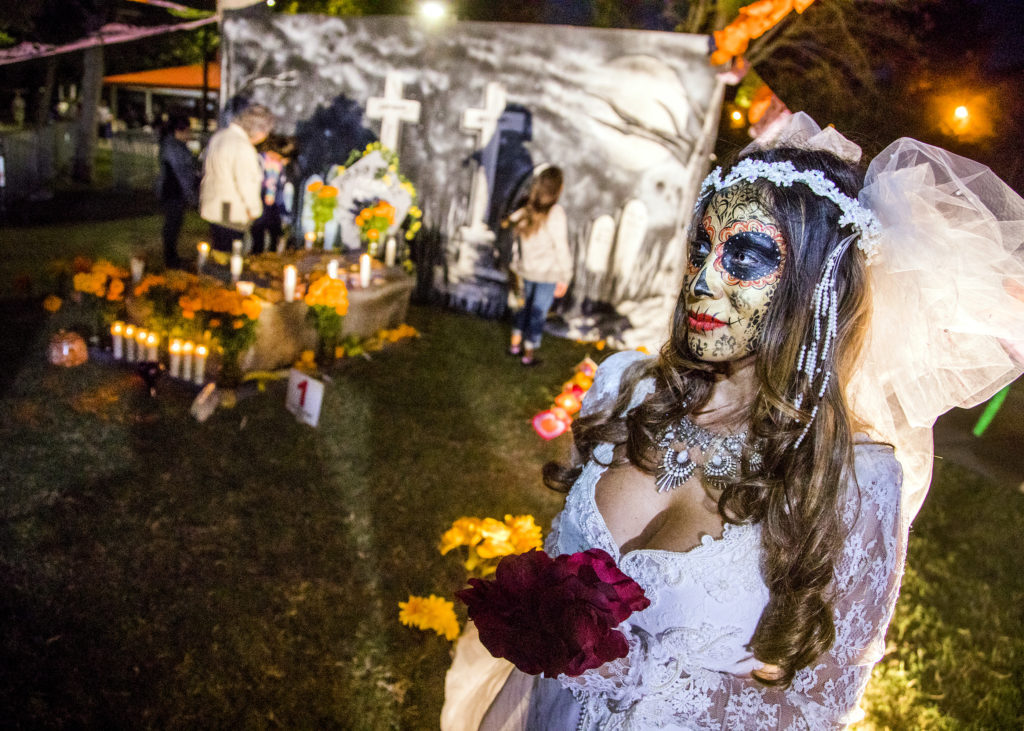 Gone are the fake blood and gore, the tricks and treats, the silly elements of the American Halloween. Day of the Dead, or “Dia de los Muertos” in Spanish, is meant to celebrate the lives of those who have gone before and take a sometimes tongue-in-cheek reflection on human mortality.

“It’s a cultural way to approach the topic of death that’s going to happen to all of us,” said Jorge Galindo, a professor of Spanish literature and culture in UNLV’s department of world languages and cultures, in an interview featured on The Nevada Independent En Espanol’s podcast. “It’s about being prepared and aware that death is part of life. It’s also about respecting, giving honor to the dead and a way to connect with our past.”

The holiday is traditionally celebrated by building colorful shrines or altars in memory of the dead, adorning them with fresh flowers, candles and favorite foods of the departed. But it’s morphed beyond those confines, offering an outlet to express not just affection for deceased family members but political themes and current events high on the creators’ minds. 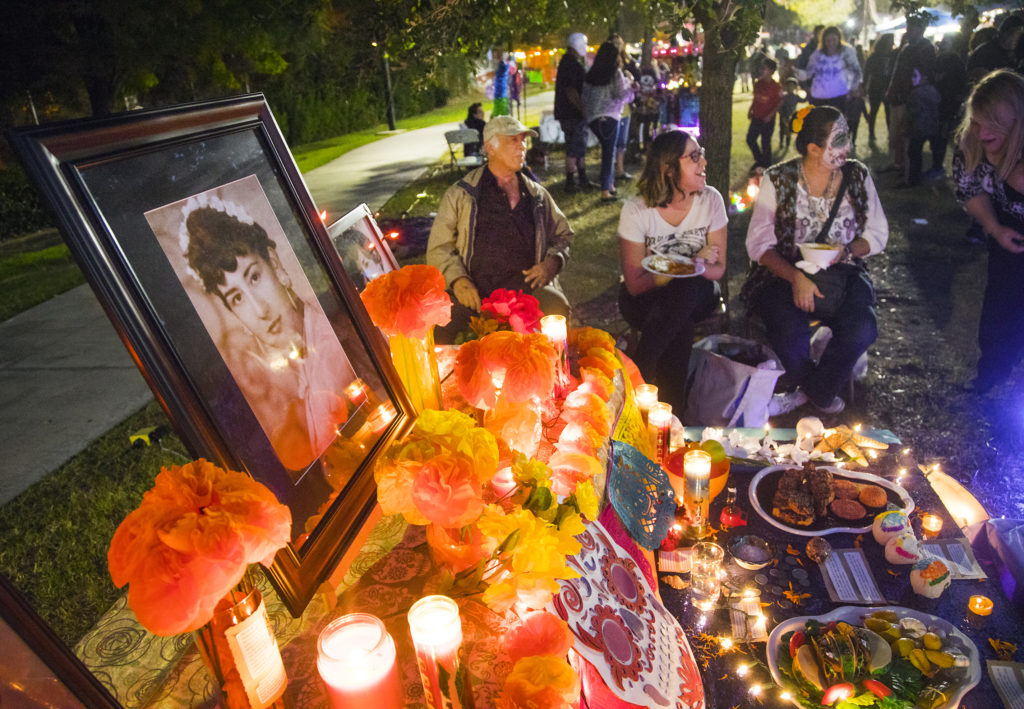 Altars on display at the Winchester Cultural Center and the Springs Preserve for Day of the Dead gave a window into what’s preoccupying locals. Several altars honored the victims of the mass shooting at the Route 91 Harvest festival, while many of those same displays highlighted tragedies that are less prominent in mainstream American news coverage — the hurricane that’s battered Puerto Rico, powerful earthquakes that rocked Mexico and the yet-unexplained disappearance of 43 college students in Mexico in 2014.

And others expressed angst over political developments. Several altars decried the end of the Deferred Action for Childhood Arrivals (DACA) program that defers deportation and offers work permits for young immigrants brought to the country illegally; they mimicked a funeral for opportunity, future careers and college degrees.

“When we open the ofrendas (offerings) to have the opportunity to do a theme, that’s when a lot of the political issues came across,” said Irma Varela, supervisor of cultural activities at the Winchester center. “That’s something that is not traditional Day of the Dead. Traditional Dead of the Dead is honoring dead, the people who are missing, so what they’re doing here is expressing a sentiment about a situation that is happening in the community and our world.” 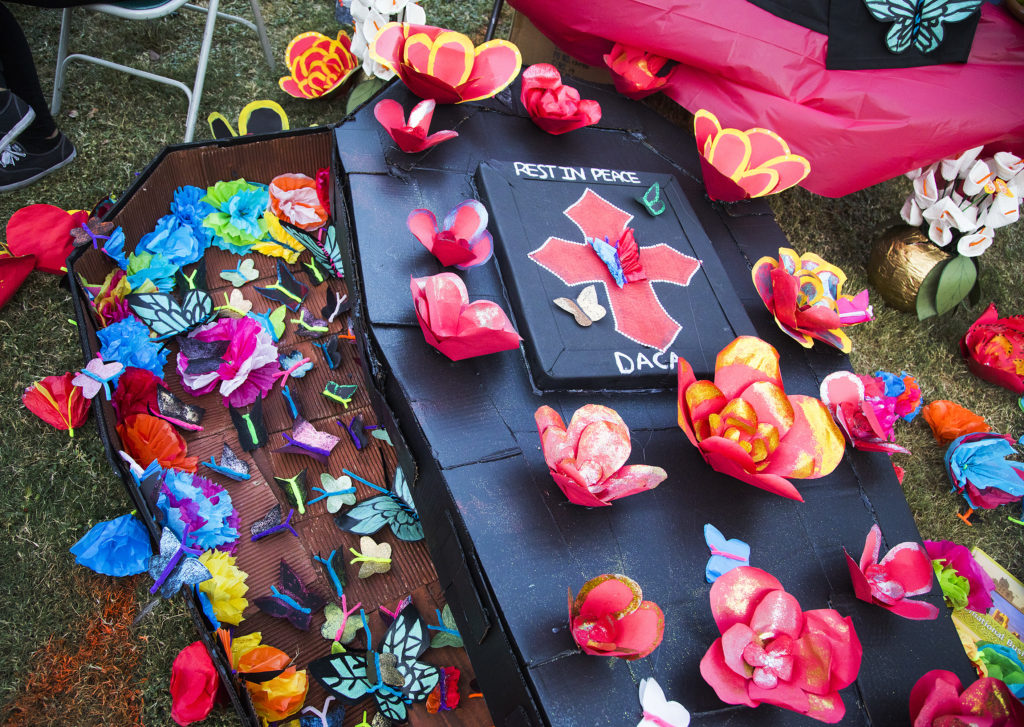 And there were also displays of dark humor. One Day of the Dead tradition is writing satirical poems called “calaveras” about living people in the form of an obituary; it’s a centuries-old exercise in making fun of politicians.

This year, President Donald Trump was a prime target in a calaveras contest — the subject of acerbic verse in both English and Spanish. 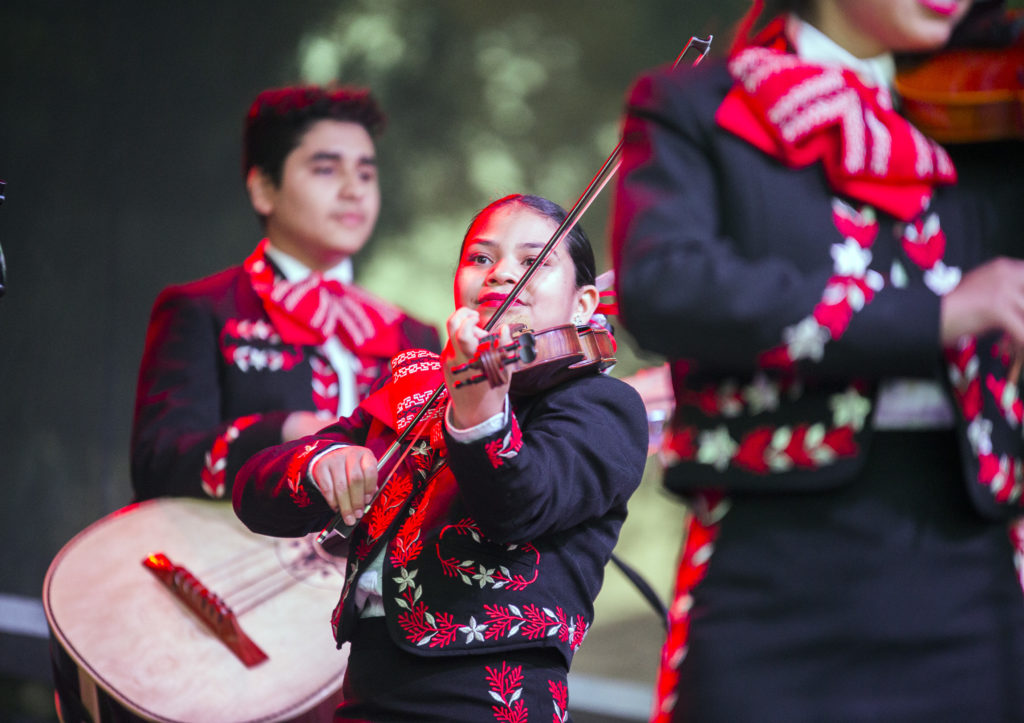 The Winchester Cultural Center has been holding a free festival called “Vida en Muerte” (Life in Death) for the past 17 years on November 1 and 2, the traditional dates for the observance in Mexico. But the roots of the holiday, which was recognized in 2008 on the United Nations’ cultural heritage list, are thought to go back centuries further.

Galindo said there are many theories about the origins of Day of the Dead, but the majority of historians and anthropologists agree that it’s a tradition predating Christopher Columbus’ arrival in the Americas.

The arrival of the Spanish prompted a mixing of two cultures, where one dominated but the other didn’t entirely disappear.

“Now we see the Day of the Dead tradition with many indigenous roots, but also Catholic and Spanish influence overall,” Galindo said. “What they did was visually get rid of what was pagan and convert it more into a Christian rite.” 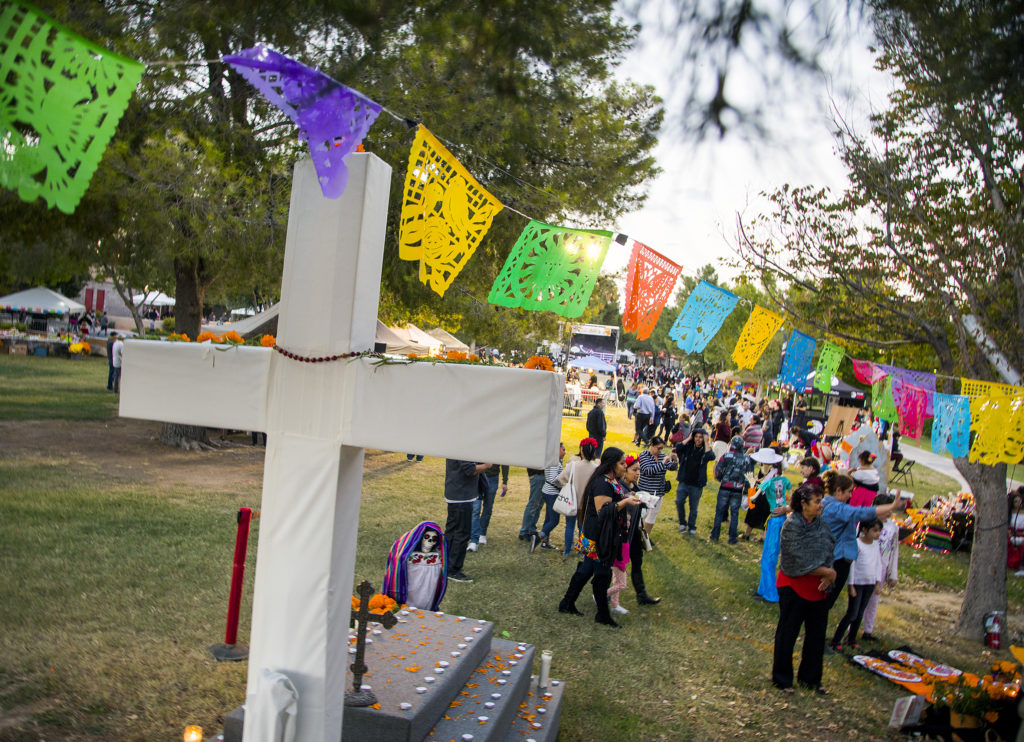 Galindo said the celebration varies by region and isn’t exclusive to Mexico. It’s also seen in Central American countries such as El Salvador and Guatemala.

He explained that the altars crafted by celebrants feature multiple levels that symbolize heaven, earth and the underworld. One of the more traditional altars of the indigenous Otomí tribe includes seven levels to correspond with the number of stages spirits pass through in the path from life to death.

With the introduction of Christianity, the seven-level concept has been adapted to also represent the seven deadly sins.

Galindo said altars have to incorporate the five senses and represent four elements — fire, earth, wind and water. They also include religious symbols like the cross or the saints, as well as photos, food and favorite possessions of the deceased. 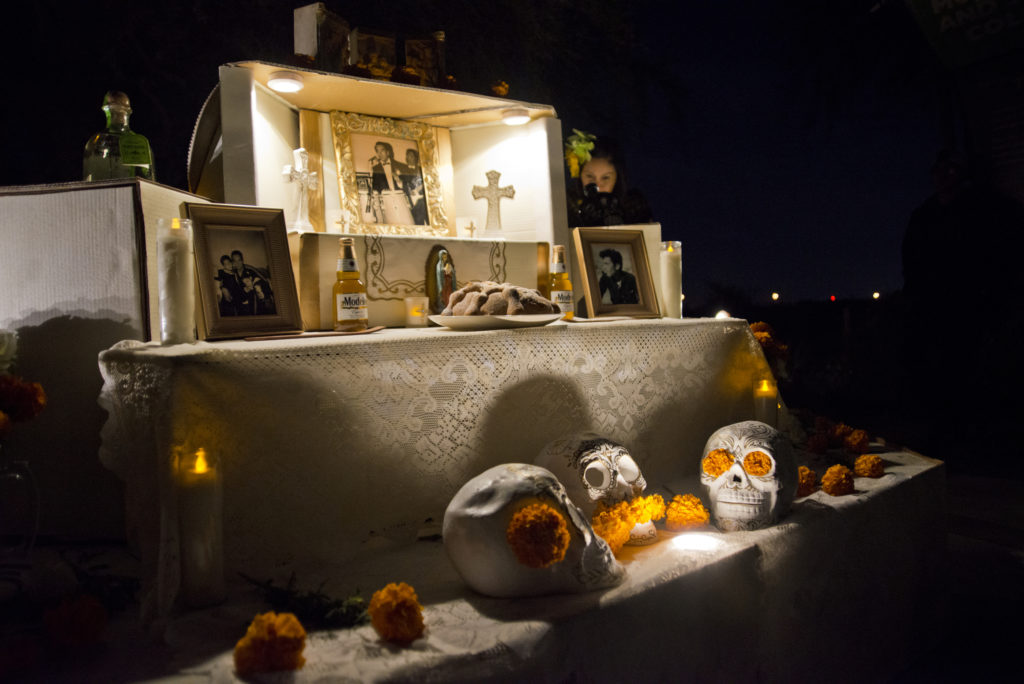 They often feature the fragrance of “copal” (a resin burned as incense), the yellow “flor de Cempasúchil” or “flower of 20 petals” that represents life, water and salt that symbolize purification and the “bread of the dead” that bakers generally make only once a year. Depending on the region, the round bread with four elevated portions can symbolize bones and the heart or can be seen as food for visiting souls.

Another common sight around Day of the Dead is “La Catrina” or “Calavera Garbanzera,” a character with a feathery hat, a long dress and an elegant strut. Her origins date back to the late 1800s, when the artist José Guadalupe Posada created the character as a satirical symbol that beyond expensive clothes, death is the great equalizer of the rich and poor.

Aside from the altars and offerings, Day of the Dead celebrations include the oral and written tradition of “calaveras” poems. Filled with satire and themed around death, the poems talk about living people in the form of an obituary for comic effect.

Some experts believe the practice emerged centuries ago from the class tensions between European-born Spaniards and those born in Mexico, with Mexican-born “criollos” making fun of the Spanish-born nobility that had more rights and social status.

A newspaper in Guadalajara began to publish them in 1800, and during the dictatorship of Porfirio Díaz, Day of the Dead was a unique opportunity for free expression and criticism of politicians. Many in the Mexican media preserve the tradition to this day.

At the Winchester center, a poetry contest drew numerous calaveras in English and Spanish. Among the poems focused on President Donald Trump was the second-place winner submitted by Charlene Stegman Moskal, which refers to death as “La Flaca” and starts with this refrain:

“If I knew La Flaca was near

I would not sit and wait in fear

I’d point her to Senor Trump

On his gold throne taking a dump.” 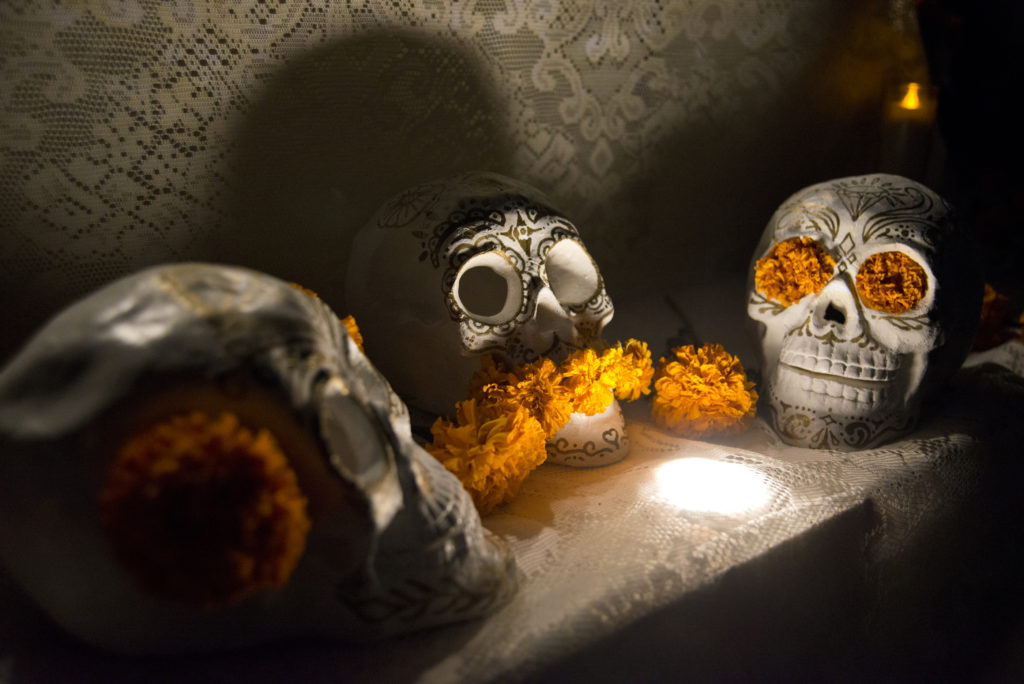 Varela launched the Vida en Muerte in the Prince of Peace church in Las Vegas because there wasn’t a place where community members could mark the occasion, other than through altars in their homes or at cemeteries.

Today, the heart of the festival is 20 altars that participants spend weeks and months creating. Some of the supplies — such as large quantities of orange and yellow flowers — come from Mexico or California because they’re scarce in Las Vegas. 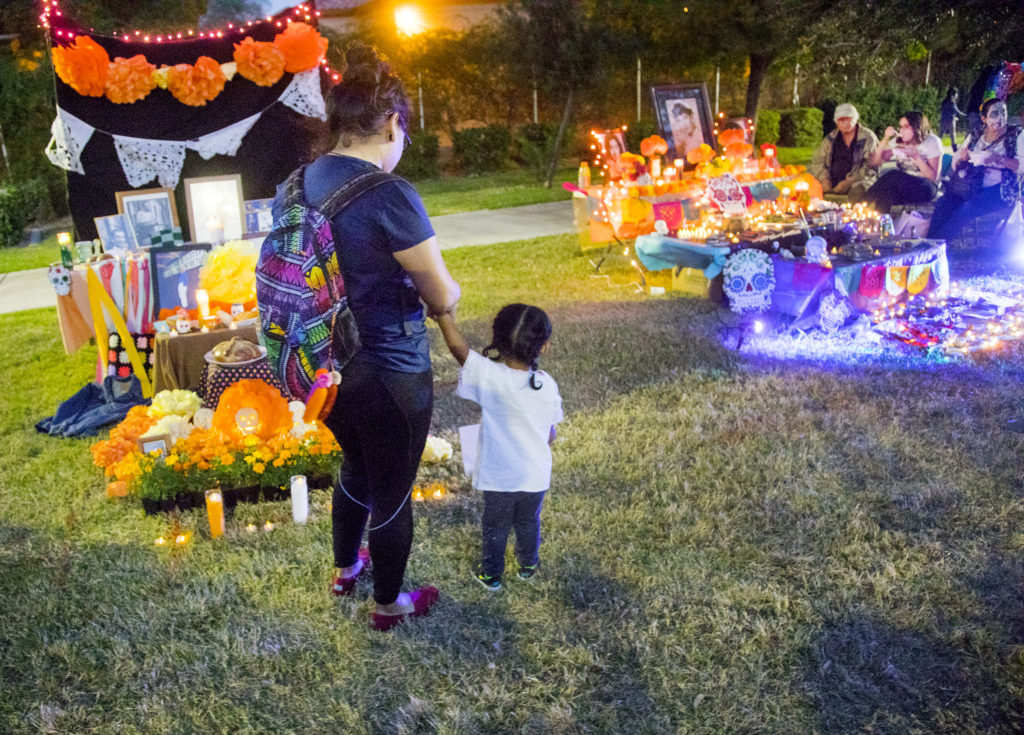 “The dead are with flowers, bright, happy, because according to our beliefs, the other world is happy,” Varela said. “Community members often want to paint their faces … when they paint them like dead people, they aren’t being gloomy, but festive, because that’s the tradition.” 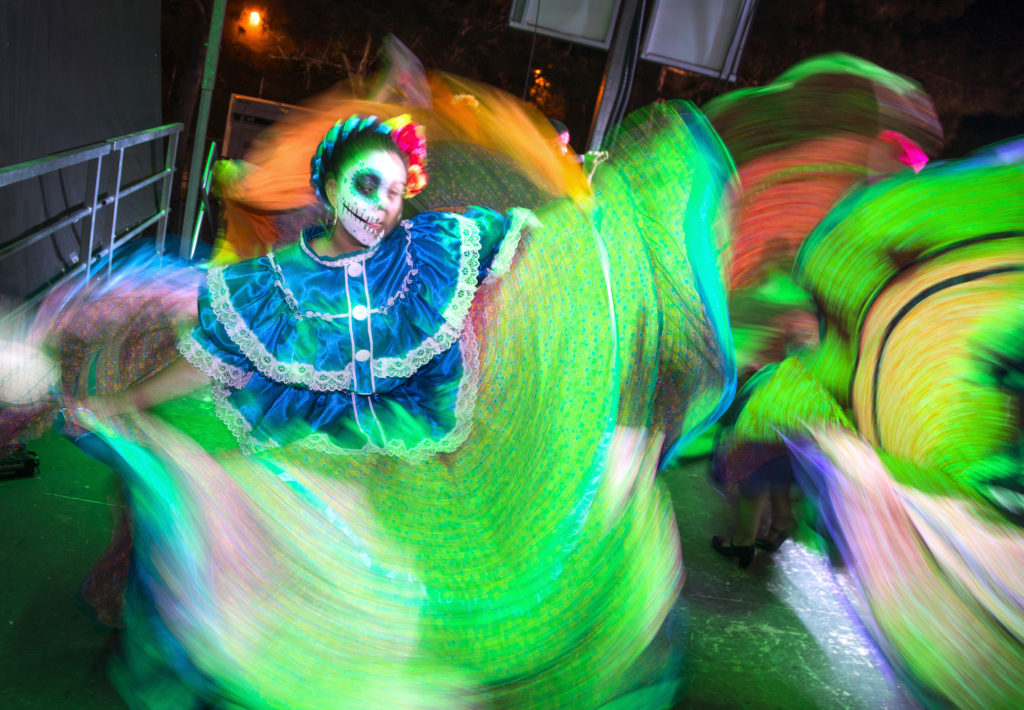 She also emphasized that not all the elements of the festival keep strictly in line with Day of the Dead tradition; groups take liberties with their altars.

“When I started the festival, that was the goal — to unite people,” Varela said. “We’re here to give them space for expression and creativity, because that’s art. Even though they’re strong messages, they’re healing.” 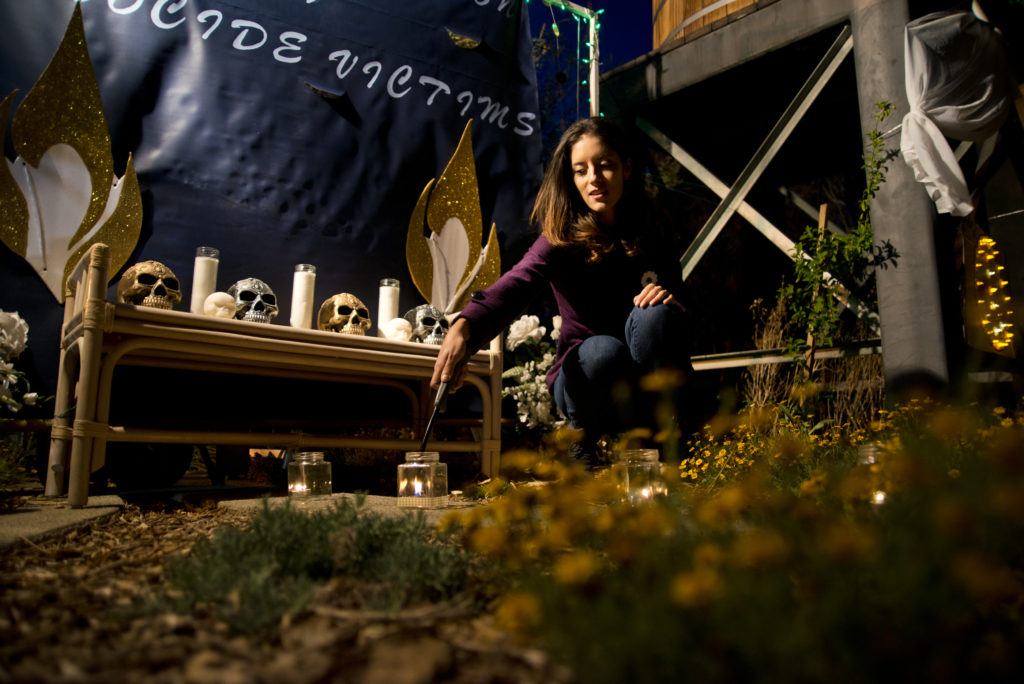 One strong message came in an altar built by students at Rancho High School that was dedicated to victims of domestic violence, including one woman whose abuser cut off her hands. The student presenters noted that Nevada is one of the states with the highest rate of women who die from domestic violence and said their altar aimed to raise awareness.

“Everyone knows it’s happening, but nobody tries to do anything to stop it,” said Diana, a senior who was introducing the altar to attendees.

At the Springs Preserve, which has been marking the holiday for the past 10 years and displayed 40 altars in its gardens this year, Mary García and Felipe Ramírez dedicated their presentation to victims of the Las Vegas mass shooting. It featured the music of country artist Jason Aldean — who was playing at the time the gunfire began — and candles illuminating photos of the people who died.

“They’re no longer with us, but we will always remember them,” Ramírez said. “This is a way to celebrate their lives.” 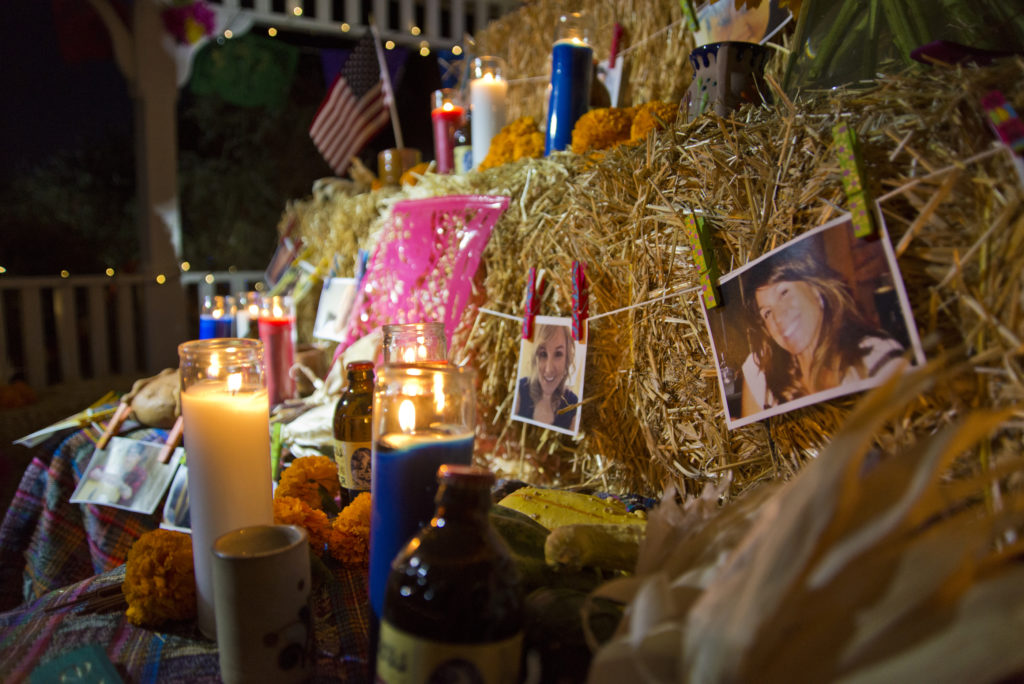 But for others, the pain of this fall’s shooting seemed to serve as an entry point for exploring a broader range of unhealed wounds — especially those in Mexico.

At Winchester, an altar honoring the Vegas victims with a hand-painted tombstone also featured markers inscribed with the dates of numerous other tragedies. There was a stone for the killing of student protesters in Mexico City in 1968, the murders of indigenous people in Acteal, Chiapas, Mexico in 1997, earthquakes in Mexico City in 1985 and 2017 and the terrorist attacks of Sept. 11, 2001.

“On these tombstones we’re trying to represent the injustices, the murders and crimes of state that have gone unpunished in Mexico,” said Jorge Martín of the group Yo Soy 132 Las Vegas, which has roots in a Mexican student social activism movement and which created the altar. “There hasn’t been one perpetrator that’s been sent to jail.” 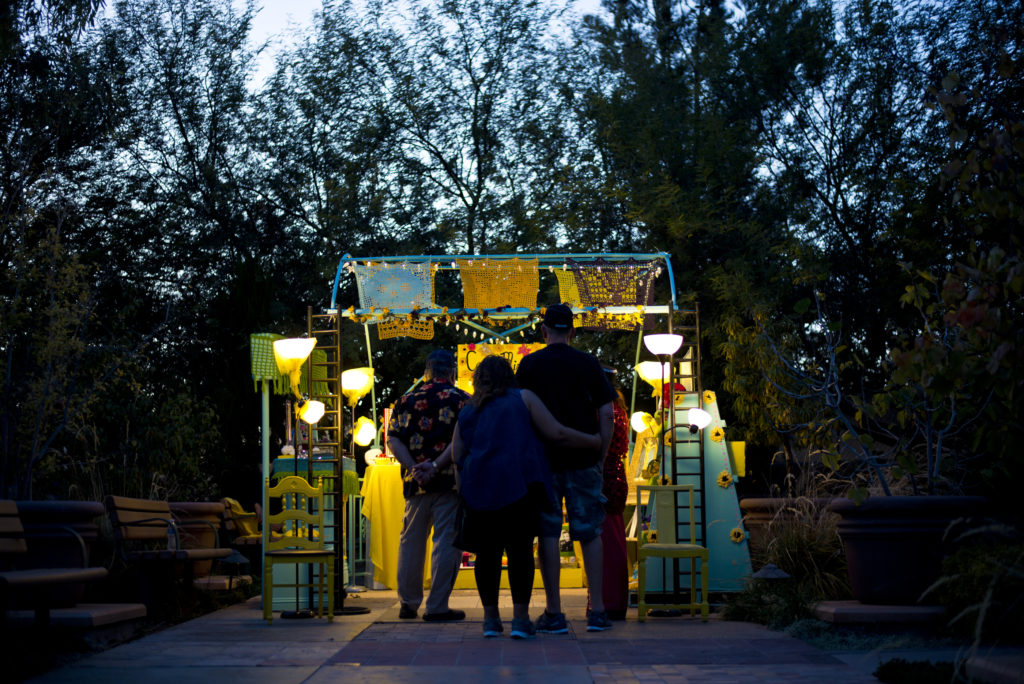