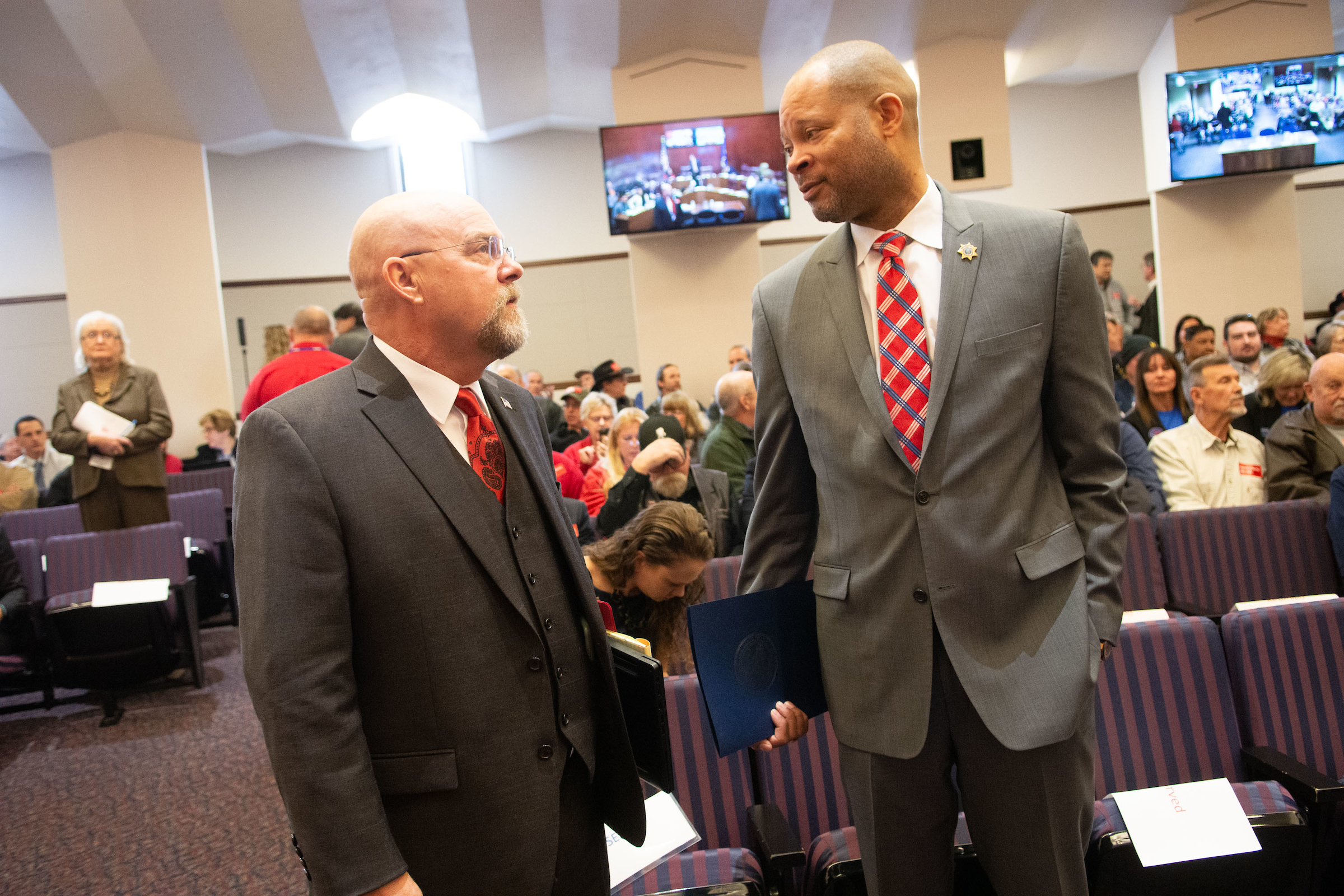 Lawmakers are considering a bill brought forward by Attorney General Aaron Ford that would limit but not ban no-knock arrest and search warrants, though a proposed amendment with further restrictions has complicated support for the legislation.

“We know that in certain circumstances, no-knock warrants can be problematic,” Ford said in a legislative hearing on Wednesday. “One of the most recent examples of such a tragedy is the killing of Breonna Taylor in Louisville, Kentucky… Her death gave rise to me bringing this bill forward.”

After Taylor, a 26-year-old Black woman, was shot and killed by a police officer during a late-night raid at her apartment in March, calls for police reforms grew across the nation, including a push against no-knock warrants.

When executing a warrant, officers typically follow the knock-and-announce rule, by which officers must first knock, identify themselves and their intent and then wait a reasonable amount of time before entry.

No-knock warrants are used to “capitalize on the element of surprise,” Ford said. In 2003, the U.S. Supreme Court upheld the use of no-knock warrants, stating that “the obligation to knock and announce before entering gives way when officers have reasonable grounds to expect futility or to suspect that an exigency, such as evidence destruction, will arise instantly upon knocking.”

Discussions of the legislation, SB50, became more contentious during the Wednesday hearing following the proposal of an amendment to the bill.

The proposed amendment, introduced by the American Civil Liberties Union of Nevada and the Nevada Attorneys for Criminal Justice, outlines more specific requirements for an application for a no-knock warrant than the original text and includes specific instructions for the execution of a no-knock warrant.

“Despite our support for this amendment, we maintain our position that an outright ban should be the public policy of the state,” Holly Welborn, policy director for the ACLU of Nevada, said in a statement. “No-knock warrants are a staple of this unjust system and the failed war on drugs. They turn communities of color into warzones by allowing officers to enter homes without announcing themselves.”

Some groups, including the Nevada Sheriffs’ and Chiefs’ Association and the Clark County district attorney’s office, changed their position from in support of the bill to neutral during testimony because they are still working through the language of the amendment with the attorney general’s office. And some of the language in the amendment raised concerns among legislators, including Judiciary Committee Chairwoman Melanie Scheible (D-Las Vegas), who works for the Clark County district attorney’s office.

Ford said the most contentious section of the amendment is an exclusionary rule, which could prohibit use of evidence gathered through a no-knock warrant if all guidelines for securing and executing the warrant are not followed.

Many supporters of the bill and the amendment spoke during the meeting about the death of Breonna Taylor and the history of no-knock warrants.

“The use of no knock warrants began in [the] 1980s as a part of the failed war on drugs and police militarization,” Christine Saunders, policy director for the Progressive Leadership Alliance of Nevada, said. “Countless stories, like Breonna Taylor's, who was unjustly murdered as a result of unnecessary no-knock warrants and systemic racism, exist across the nation. Senate Bill 50 would create a high threshold for law enforcement to justify why a no-knock warrant is necessary.”

Others in the meeting voiced frustration over the limited time for testimony. Those who called in to provide testimony were each given two minutes to speak, and 10 minutes each was allotted for testimony in support, in opposition and neutral. One woman, who attempted to voice support for the bill during neutral testimony, was cut off shortly after she began speaking.

“I think it's unacceptable that we only get 10 minutes to talk, especially for impacted persons,” she said.

The hearing was the first for the bill and did not include a vote, as Ford said he plans to meet with stakeholders to hash out remaining points of dispute. He also noted that the bill would not completely prohibit the use of no-knock warrants, but rather allow for their use in situations where one is necessary to ensure someone’s safety or to prevent the destruction of evidence.

However, the bill would also restrict the types of crimes no-knock warrants are used for by prohibiting their use for misdemeanors, property crimes and low-level drug possession.

“Nevada's police have done a good job of policing themselves on the use of no-knock warrants,” Ford said. “However, the restraint we have seen exercised here is the result of internal policy, not law. SB50 seeks to enshrine these policies into law by providing that no-knock warrants can only issue in very limited circumstances.”