Libertarians need to shut up about vaccine passports, everything else 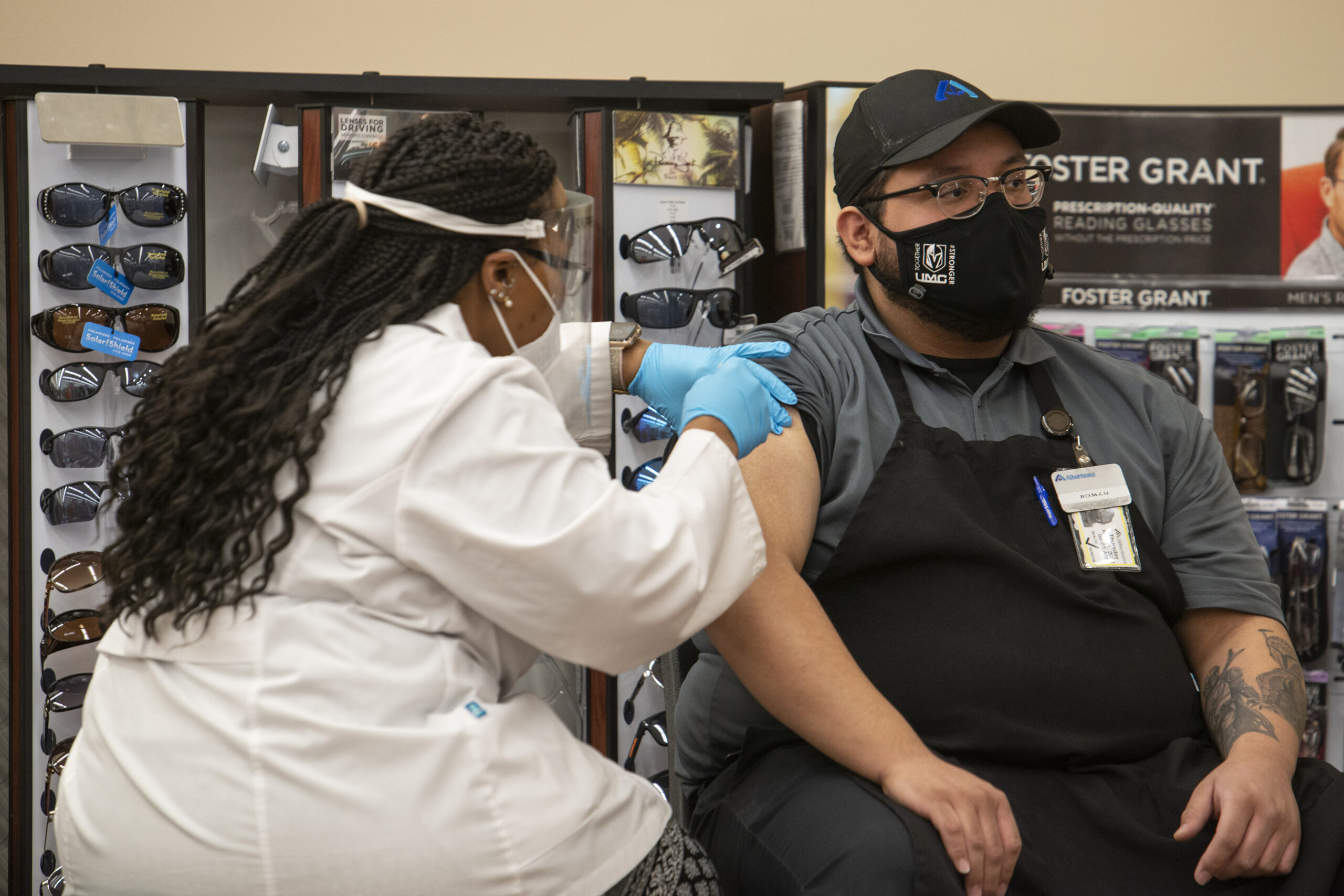 We want to go outside. We want to go inside. Many of us want to eat in restaurants, go to bars, go to concerts, visit conventions, and otherwise socialize with random strangers without worrying overly much about whether or not we should go all Howard Hughes-y when we get back home. Most importantly, most of us would like to do these things without escalating the staggering body count COVID-19, which has already killed more than 550,000 Americans since last March, has inflicted upon our country.

The quickest and most inexpensive way to do that is to vaccinate everyone as fast as possible — which, to our credit, we’re doing and we’re getting better at it. Of the 30 most populous countries on Earth, we have vaccinated ourselves faster than every other country save one, with only the citizens of the United Kingdom doing a better job of Brexiting COVID-19 from their immune systems thus far.

Answering this question at scale is where the logic of “vaccine passports” (portable proofs of vaccination which can be provided upon request, in other words) asserts itself.

If you could host a concert, sporting event, or festival and know that every performer and every audience member was vaccinated, you would be able to better reduce your liability, even if it’s only reputational, for hosting a potential superspreader event (just ask any cruise ship company after a norovirus outbreak). Much more importantly, if everyone at your event is vaccinated, you also know there’s no practical need for the reduced capacity limits originally put in place to buy time for the development (a few months) and regulatory approval (nearly a year, which was record breaking) of the very vaccines already in your guests’ and employees’ arms. This means you can host larger, closer crowds — and yes, sell more tickets and make more money.

Naturally, both government officials and private entrepreneurs want to meet this demand, which is currently being imperfectly met through the use of the easily forged CDC verification cards each vaccine recipient currently receives in this country — which, to be fair to the CDC, were designed to be a receipt of successful vaccination, not an interrogable document of trust. According to the Washington Post, there are currently at least 17 different vaccine passport initiatives underway, including New York’s Excelsior Pass, which was built on IBM’s Digital Health Pass, and the Linux Foundation’s COVID-19 Credentials Initiative.

The idea of a vaccine passport isn’t new. For example, the International Certificate of Vaccination or Prophylaxis (ICVP), otherwise known as the so-called “yellow card” which international travelers are required to carry to visit certain countries, originated with the International Sanitary Convention for Aerial Navigation in 1933, which primarily focused on preventing air travelers from spreading yellow fever. In 1944, the ICVP was updated to include certifications of inoculation against cholera, yellow fever, typhus, and smallpox. Nowadays, several African countries still require travelers to carry an ICVP certifying they’re inoculated from yellow fever, and Canada recommends completing an ICVP for polio as well.

What would be new, however, would be applying proofs of vaccination to more than just international travel, medical appointments, and enrolling schoolchildren. Doing so raises important philosophical, political, technical and moral questions.

For example, should vaccine passports be required to attend large gatherings? (California is leaning in that direction.) How large of a gathering is a “large gathering”? Should casinos and resorts require them, or even be allowed to ask for them? What about restaurants? Grocery stores? Landlords? Should employers be able to require vaccine passports from employees? If so, which employers? Should it just be limited to health and education staff, limited to public-facing businesses like retail and casinos, or should any employer be able to ask for valid vaccine passports from their employees? Where is the health information backing these credentials stored, and under which circumstances would this information be released? Do we limit these vaccine passports solely to COVID-19 vaccinations, or do we include other vaccination info as well? What about people who can’t be vaccinated — will they no longer be able to fully participate in society?

Vaccine passports, in other words, will impose new costs, whether they’re developed publicly or privately. For starters, they won’t be free to develop, implement, and distribute, materially-speaking. Additionally, as Michael Brandan Dougherty pointed out in National Review, if implemented and normalized, many activities which currently don’t require vaccine passports — “shopping, traveling, gathering together, attending weddings and funerals” — may require them in the future, regardless of government action. Megan McArdle, who’s generally in favor of vaccine passports, further notes for The Washington Post that even private vaccine passports create an instrument of “some coercive power,” and we should be careful to ensure they’re being used persuasively to encourage people to vaccinate, not to coerce people into getting vaccinated if they want to leave their home.

On the other hand, there are also some obvious benefits to vaccine passports, at least at this stage of the pandemic, and some of the costs may be overblown. Zvi Mowshowitz, who publishes an excellent weekly review of COVID-19 news, takes many of the concerns seriously but points out refusing to allow vaccinated people to resume a normal life also has costs — it produces vaccine hesitancy (why bother getting vaccinated, a sore arm, and possibly a mild fever for a day if you can’t leave the house anyway?) and prevents otherwise normal gatherings from resuming.

Identifying and weighing the costs and benefits of vaccine passports will take time and effort. Weighing the rights private property owners have to control and condition access to their property against an individual’s right to privacy will require careful consideration, understanding, negotiation, and compromise from all sides.

Luckily, the Libertarian Party, my chosen political party for over two decades, is at the forefront of this discussion by… comparing vaccine passports to the Holocaust and Jim Crow.

Okay, that’s not entirely fair. Two state Libertarian Party affiliates don’t represent the whole of the organization. State parties, in fact, are legally separate from national parties (this is just as true for Republicans and Democrats as it is for Libertarians), and are governed by each individual state, not their national parties. About all the national Libertarian Party could do is what it did — three days after the Libertarian Party of Kentucky compared vaccine passports to the yellow Star of David Nazis made Jews sew to their clothes, the national party released a Resolution on Vaccine Passports, which features seven “whereas”-es (if I’m ever made Lord Emperor of the Libertarian Party, my first act will be to ban the use of “whereas” in all party documents) and concludes that the government shouldn’t require vaccine passports, all without saying a word about whether or not it was appropriate to equate vaccine passports, which track whether or not you took the half hour out of your day to get a vaccination or not, with historical mistreatments of various racial and ethnic groups.

Okay, maybe the national party could have done a bit more than that.

To be… more charitable than fair, political parties make poor think tanks, as anyone who’s watched a county central committee try to wrangle a platform out of itself can attest, and social media isn’t exactly the semi-mythical agora of Athens, where history’s brightest minds loftily discuss the issues of the day. Put the two together and the best you can hope for from a political party social media account are a series of anodyne calls to action which say little and persuade no one, punctuated with the occasional resharing of content put out by party-aligned candidates and elected officials. When a state party makes the news for its social media posts — and the Libertarian Party of Kentucky certainly did that — it’s never good.

To be fair, however, David Boaz was absolutely right — the sort of people who truck in that sort of nonsense and hyperbole look like idiots and bigots, regardless of their self-professed political affiliation.

Thankfully, there are other Libertarians to listen to. As Jeffrey Miron and Erin Partin recently pointed out for Cato At Liberty, for example:

If a restaurant or an airline does not want to expose its employees or customers to an infected patron, or if they want to require vaccination before employees can return to work in person, they should be free to do so. This not only benefits the customers (and employees who should not get vaccinated for medical reasons), but also the community at large. Society benefits further if such requirements induce people at the margin to receive a vaccine, thus aiding herd immunity.

Alternatively, Reason Magazine’s J.D. Tuccille does an excellent job not only highlighting some of the potential pitfalls of a vaccine passport but also highlighting that many governments are already involved in the process of developing and provisioning them.

There are also, however, other people to listen to more generally, Libertarian or otherwise, who don’t view every single issue facing America as a new front to gleefully pursue politically motivated mutually assured destruction. Yes, it’s easier to get more social media traction by saying something like this or like this, but annoying the largest crowd possible does not get us any closer towards ending lockdowns, reopening businesses, reopening our governments (honestly, I’m fine with these remaining closed for a while longer), bringing our children back to school, and yes, taking our masks off while minimizing the number of deaths and hospitalizations along the way.

Unfortunately, as long as certain Libertarians think trolling is public policy advocacy, and as long as they’re the loudest voices in the room, I can’t encourage you to take their opinions seriously. I certainly don’t want to.

David Colborne has been active in the Libertarian Party for two decades. During that time, he has blogged intermittently on his personal blog, as well as the Libertarian Party of Nevada blog, and ran for office twice as a Libertarian candidate. He serves on the Executive Committee for both his state and county Libertarian Party chapters. He is the father of two sons and is an IT professional. You can follow him on Twitter @DavidColborne or email him at [email protected].