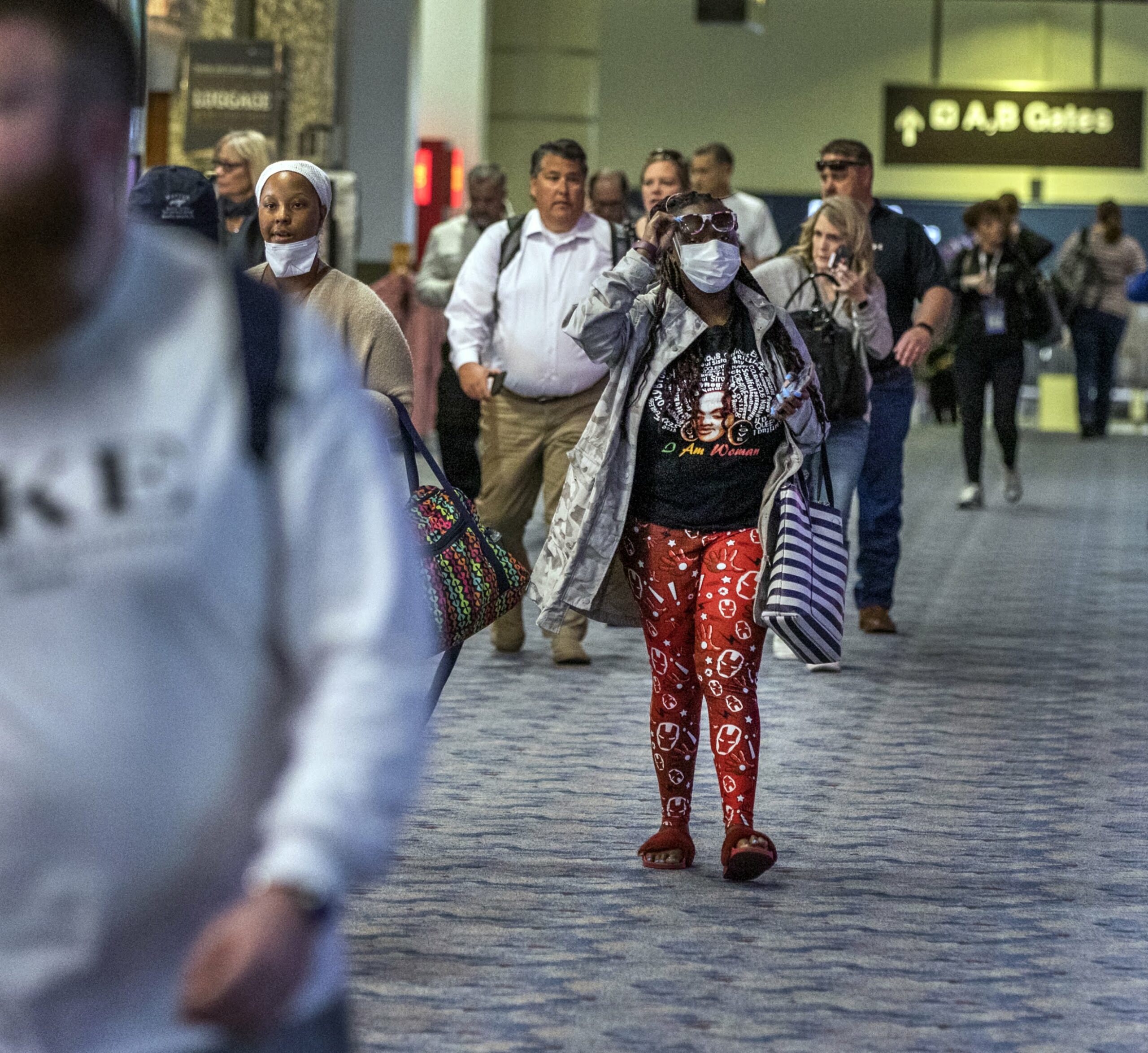 As the novel coronavirus continues to spread across the U.S., service economies have already begun to strain under a wave of pressure from health officials to close off large gatherings and limit exposure to highly public areas.

That economic pain has the potential to become particularly acute in Nevada, where major casino operators alone have shed millions in stock value as dozens of major events from conventions to NHL games have been canceled or postponed.

This live blog will contain the latest updates on the economic impacts of the coronavirus on Nevada’s local economies, as well as a listing of what events have so far been canceled, postponed or are scheduled to continue. To scroll directly to that list, click here.

MGM Resorts International is suspending new hotel reservations at the Vdara Hotel & Spa, the first major shuttering of operations for a major Las Vegas Strip resort amid spread of the novel coronavirus.

The company confirmed Sunday that it would suspend future reservations for the hotel, located in CityCenter, but would honor existing reservations and would reduce some food and beverage outlets as a response to lower demand.

"In response to business volumes and demands, we are consolidating our operations," an MGM Resorts spokesperson said in an email. "Guests of Vdara will be relocated to Aria this week. Vdara will also not be accepting reservations for stays earlier than April 12.”

A day after suspending its touring and international shows, Cirque De Soleil announced Saturday that it would immediately suspend the circus company’s six residency shows in Las Vegas because of concerns over the coronavirus outbreak.

The suspended shows include “O” at the Bellagio, KÀ at the MGM Grand, The Beatles LOVE at The Mirage, Mystère at the Treasure Island, Zumanity at New York-New York and Michael Jackson ONE at Mandalay Bay.

The company made the announcement to suspend the shows on Twitter on Saturday evening, citing international and federal recommendations for social distancing and the “escalation of the Coronavirus (COVID-19) pandemic.

Cirque said it would contact any individuals who have purchased tickets to canceled shows, and they would be reimbursed at the point of sale.

Wynn Resorts’ chief executive officer, Matt Maddox, promises to continue paying full-time employees, even if they are not working, during this turbulent period, according to an internal video that features him speaking directly to them.

His brief remarks seek to reassure employees during the coronavirus crisis, which Maddox predicts will drop hotel occupancy rates to the “low teens” and lead to rolling closures of places such as spas, nightclubs and theaters.

“That to me is not our concern,” he says in the video. “What our concern is is that we all get through this together … But what we’re going to do during these challenging times is make sure all our full-time employees — whether you’re in a closed outlet or you’re working here — will be getting their pay.”

Although the trajectory and scope of the virus remains unknown, Maddox said the gaming company will do everything in its power to save jobs. He then calls on employees to take care of themselves and follow health protocols during this time.

“My commitment to you is that we’re in this together,” he says. “And I need your commitment that you’re going to take all of our protocols seriously and ensure that we continue to implement proper social distancing in all of our outlets to avoid spreading COVID-19 to any guest or any employees that are in here.”

The Nevada Gaming Control Board issued a notice to licensees Friday that lays out some general guidelines regarding COVID-19.

The one-page memo says the board expects all licensees to comply with coronavirus-related guidance published by the Occupational Safety and Health Administration. It also advises them to consistently monitor the Centers for Disease Control and Prevention’s website, perform routine environmental cleaning, encourage sick employees to stay home, ask employees to check CDC recommendations before traveling, and ensure that an “Infectious Disease Outbreak Response Plan” is in place.

“We will continue to closely monitor the spread of COVID-19, and expect that licensees will make the health and safety of their employees and patrons the highest priority by providing them with every available opportunity to remain healthy,” Chairwoman Sandra Douglass Morgan wrote.

The Gaming Control Board also said the notice was issued because of an increased number of inquiries — not in response to a complaint or concern.

Casinos across Nevada have taken steps to mitigate the spread of the upper-respiratory virus, including shuttering buffets, spas and nightclubs. No casinos here have announced closures, although some in other states have taken that step

March 12, 3:15 p.m.: Investment group likens toll on travel to Las Vegas from coronavirus to effects from 9/11

Analysts with Innovation Capital said the impact on travel to Las Vegas because of the spread of the novel coronavirus would bear stark resemblance to the travel landscape in the wake of the September 11th terrorist attacks.

During a conference call with investors and reporters Thursday, analysts and investors broke down a series of economic indicators that show a casino industry roiled by the still-uncertain economic effects of the virus.

Stock prices among both major and regional operators and were down more than 38 percent from the start of the year, with the steepest drops coming just as global cases of the virus began to rise in late February. Gaming operator bond prices have also fallen roughly 8 percent, and the Innovation Capital report found those companies with heavy exposure in Macau — a gambling mecca in Southern China hit early by the coronavirus — have been affected most.

Underscoring the economic situation for the gaming industry and beyond is growing air of uncertainty; global markets plunged day-after-day this week, and worries continue to grow that a downtick in consumer spending, spurred by fear of the coronavirus, could trigger a recession.

“I think the market volatility plus the prolonged consumer fear, I think will likely result in reduced consumer discretionary spending,” Matt Sodl, president and managing director of Innovation Capital, said. “People are going to be spending more out of their pocket and focusing their reserves on the kind of the needed items that they need to exist on a daily basis, which is likely going to put us into a recession this year if we're not there already.”

Dozens of major conferences, concerts, gatherings or other events have now been limited, postponed or outright canceled in the wake of mounting fears of the spread of the novel coronavirus.

Those cancellations have spread far and wide, including everything from the City of Austin’s cancellation of South by Southwest last week to the announcement yesterday that Coachella — long a staple of the music festival circuit — would be postponed until October.

It comes as cases of the coronavirus have steadily ticked up across the United States, with nearly 1,000 confirmed cases across 37 states and Washington, D.C. as of Tuesday. That includes Nevada, which confirmed its first so-called “presumptive positive” case of the disease late last week.

The most severe outbreaks have so-far been limited to Washington State, with other hot spots in California and New York. But several high-profile cases of coronaviruses linked to major conferences — including the self-isolation of a handful Republican congressmen in the wake of a confirmed case of the virus at the major CPAC convention near the nation's capital — have increased public scrutiny of such large-scale events.

No such outbreaks have yet affected the many convention halls of the Las Vegas Strip, but those spaces have nevertheless been hit quickly by a flurry of cancellations.

Such cancellations are widely expected to trigger ripples across the state’s service industry, though little concrete data on the scope of the issue is available; the wave of cancellations effectively began just last week, and residual effects on flights and other travel to Las Vegas may take several days or weeks to become clear.

Below is a listing of what’s been canceled, what’s still being planned and what remains in-between. Entries will be updated as new information becomes available.

What’s been canceled, closed or postponed

The Nevada Athletic Commission has suspended all combat sporting events indefinitely, a decision that will affect UFC, Premier Boxing Championships and Top Rank Boxing, among others.