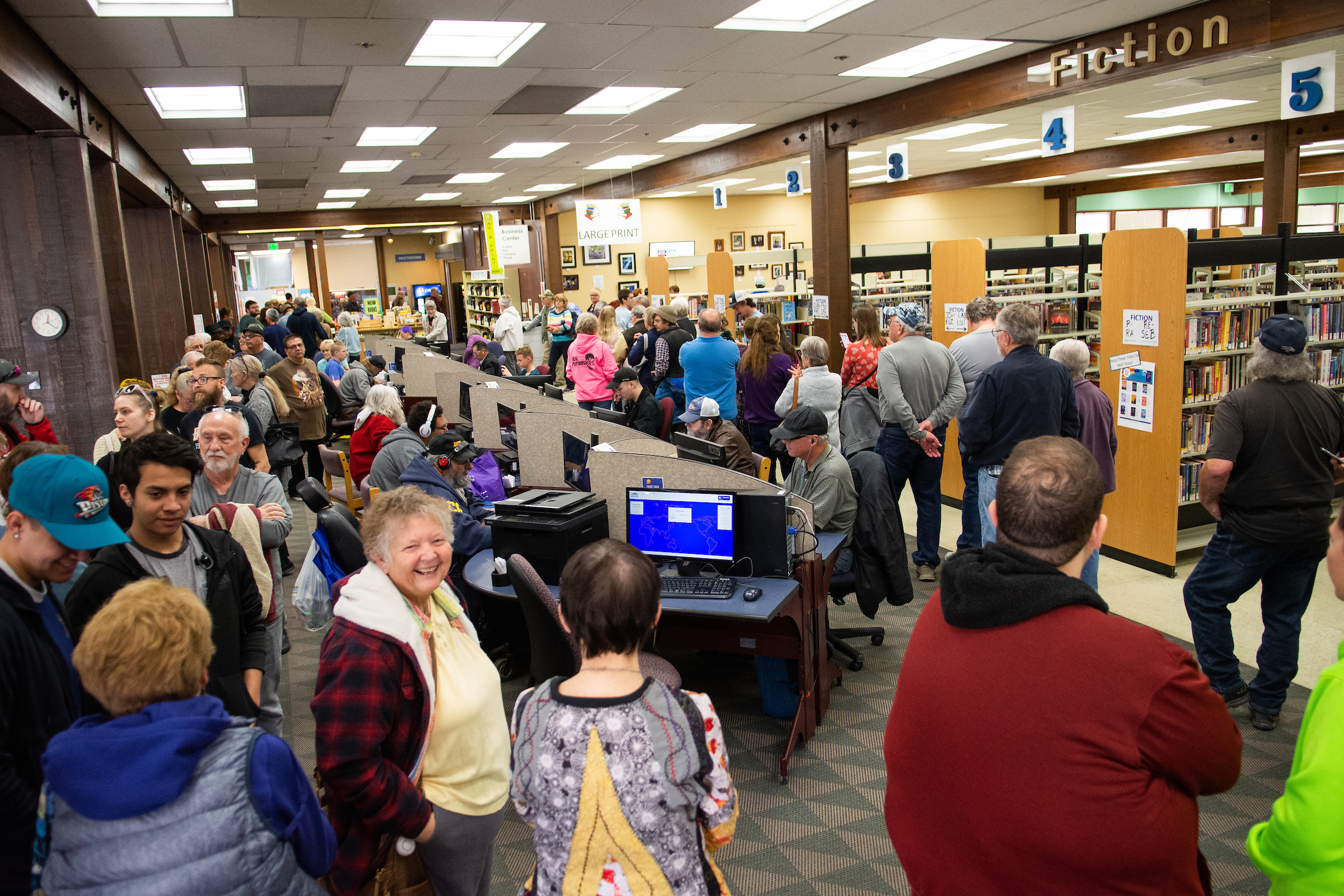 The line of Democrats at Sierra Vista High School Saturday morning snaked through the cafeteria, across the quad, out the front gate and to the parking lot.

For some who had hoped to quickly cast their early ballots for the Democratic presidential caucus and get on with their weekend, it was frustrating. Others took it in stride. They got to know their neighbors in line. They munched on pizza delivered to the early voting site to feed hungry caucusgoers. They reveled in the fact that so many Democrats were so dedicated to participating in the political process that they stood in line for hours just to cast their presidential preferences early ahead of the state’s Feb. 22 caucus.

It’s not every day that someone who waits in line for two and a half hours describes the experience as “wonderful.” But that was the word Mary Lewis, 66, chose to describe her Saturday afternoon.

“It was nice visiting and talking to people from different areas and to know they’re all here for the same reason,” Lewis said. “It was really nice. They served us water and pizza and it was just great.”

Other voters weren’t so sure about the process. Leaha Crawford, 49, said at the early vote site at Doolittle Community Center that there were not enough volunteers and that the Democratic Party needs to “do better” with the early voting and caucusing.

18,538 Democrats turned out to cast their presidential preferences on the first of four days of early voting at 63 sites across Nevada, according to the Nevada State Democratic Party. Early Saturday morning, Clark County Democratic Party Chair Donna West, who was waiting to vote at the East Las Vegas Library, was already grinning about the long lines.

“Democrats love to vote early,” she said, referring to the usual early voting process for regular primaries and general elections. This is the first time Nevada Democrats have implemented early voting for the caucus.

Party spokeswoman Molly Forgey said they are “excited and really happy” to see so many people participating in the early voting process.

“Between seeing turnout down in Iowa and up a little bit in New Hampshire, it was hard to have expectations, coupled with four days of early voting,” Forgey said. “We’re just really happy to see everyone turning out.”

Those long lines didn’t come without their challenges, though. Multiple polling places, including the one at Sierra Vista, made the decision mid-day to abandon the use of a Google Form for the check-in process. Under the original procedure, caucusgoers were supposed to have their voter registrations verified by a volunteer equipped with an iPad loaded with the county’s voter rolls at one station, and then proceed to a second station where another volunteer would fill out a Google Form on another iPad to complete the check-in process.

Caucus sites quickly found themselves overwhelmed by the procedure, which wasn’t difficult so much as it was lengthy. Each check-in was taking several minutes per person. So, in consultation with the party, several caucus sites made the decision to stop using the Google Form and transition to an almost entirely paper-based process, only using the iPad to access the voter rolls.

After the switch-over happened at about 2:30 p.m. the line at Sierra Vista started moving much more quickly. Under the new process, caucusgoers had their voter registrations checked by a volunteer on an iPad, received a paper ballot and voter card, completed those forms, took them to a station where a volunteer would record their unique voter PIN sticker affixed to those forms next to their ballot’s number, had their forms checked to ensure they were completed correctly and then deposited them in the ballot box. Though still a multi-step process, it didn’t seem to bother most voters.

Karen Skeel, 68, characterized the line as “ridiculous,” but said the process once she got to the front of the line was “easy.”

Caucusgoers Bambi Nicklen and Brad Zucroff waited three and a half hours to cast their ballots. Zucroff said it was a “hassle” to stand in line but “kind of cool to see this many people involved.”

“Imagining that this many Democrats are out today, in this one venue, it’s fabulous,” Nicklen said.

The only hitch to abandoning the Google Form check-in sheet is that party volunteers will now need to process paper forms containing voters’ secretary of state ID numbers — both to ensure no one votes twice and that early voters’ preferences flow back to their home precinct to be counted on Caucus Day — by hand. That information will be added to a sheet with all the Google Form check-in responses that were received, and the party will analyze that sheet to make sure no one secretary of state ID number has voted twice.

A party official said Nevada Democrats planned for this kind of situation months ago when it was preparing backup plans in the event that the two apps it had planned to lean on — that were scrapped in the wake of Iowa’s caucus — failed. The official said that the party has built up a team of organizers specifically to handle massive amounts of manual data entry, but was not able to immediately provide the size of that team.

Another snag volunteers in Clark County had to contend with was trying to find caucusgoers’ registrations in 26 different PDFs — one for each letter of the alphabet — containing the names of more than 460,000 Democrats. A search function they were told would exist didn’t work as expected, leaving volunteers scrolling through long lists of names to find the person they were looking for.

And for caucusgoers, there was some confusion about a requirement that they choose a minimum of three candidates on their presidential preference ballots.

For early voting, caucusgoers are required to select at least three and no more than five presidential preferences, because those preferences will be counted along their neighbor’s choices on Caucus Day, just as if they had been there in person. If an early caucusgoer’s first-choice candidate doesn’t meet a minimum level of support in order to be considered viable in the caucus, they will be realigned in support of their next highest ranked candidate that does make the cut.

But Nevada Democrats announced in a memo to campaigns late Friday night that early caucusgoers who fail to make at least three choices will have their ballots voided. However, the memo also noted that if a voter chooses to vote for the same candidate three times, the ballot will not be declared void. That caused some confusion at the polls where caucusgoers generally knew they had to make three choices in order for their ballot to count but were unsure whether they could vote for a candidate more than once.

Ada Glover, 76, arrived at Doolittle Community Center already aware of the rule about picking three choices. But she said that volunteers needed to do a better job about educating caucusgoers, particularly those used to the traditional caucus process.

“They need to explain to older people that they have to choose three,” Glover said.

Despite minor frustrations, caucusgoers seemed generally happy with the early voting process on Saturday. Michael Collins, a 35-year-old building analyst from Reno, was the first person other than volunteers to cast his early vote ballot at the Washoe County Dems Office in Reno, which was the first early voting site in the state to open Saturday morning.

“Frankly, there’s so much checking and cross-checking and because it’s on paper, I’m very confident that things will be counted properly,” he said.

One aide to a top Democratic campaign in Nevada noted the issues with the Google Form taking too long to complete and the voter roll PDF being too hard to search, but was similarly hopeful. The aide said that there was “a lot of troubleshooting today because of the general lack of information leading up to early vote” but that campaign staff “feel really good.”

At the end of the day, though, many caucusgoers left their early voting sites still wondering if a traditional primary might be easier.

“We’ve been to actual caucuses before, and this is much less hell,” said Patrick McQuillan, a caucusgoer at the Washoe County Dems Office. “Seriously, the caucus process is just brutal, we don’t like it, we’d prefer not to deal with it, but unfortunately in Nevada we don’t have a choice.”

And the times are changing. Even former Senate Democratic Leader Harry Reid, who was responsible for winning Nevada its early caucus status, couldn’t rule out the possibility of Nevada switching from a caucus to a primary.

“We were very fortunate to get a caucus in Nevada. We were way down the list previously. And for us to be number three has made it so now the pundits are saying we should be number one, and we're going to focus on the caucus now,” Reid said. “When we finish with Super Tuesday, we'll revisit that issue as to whether we should have caucuses or direct primaries.”