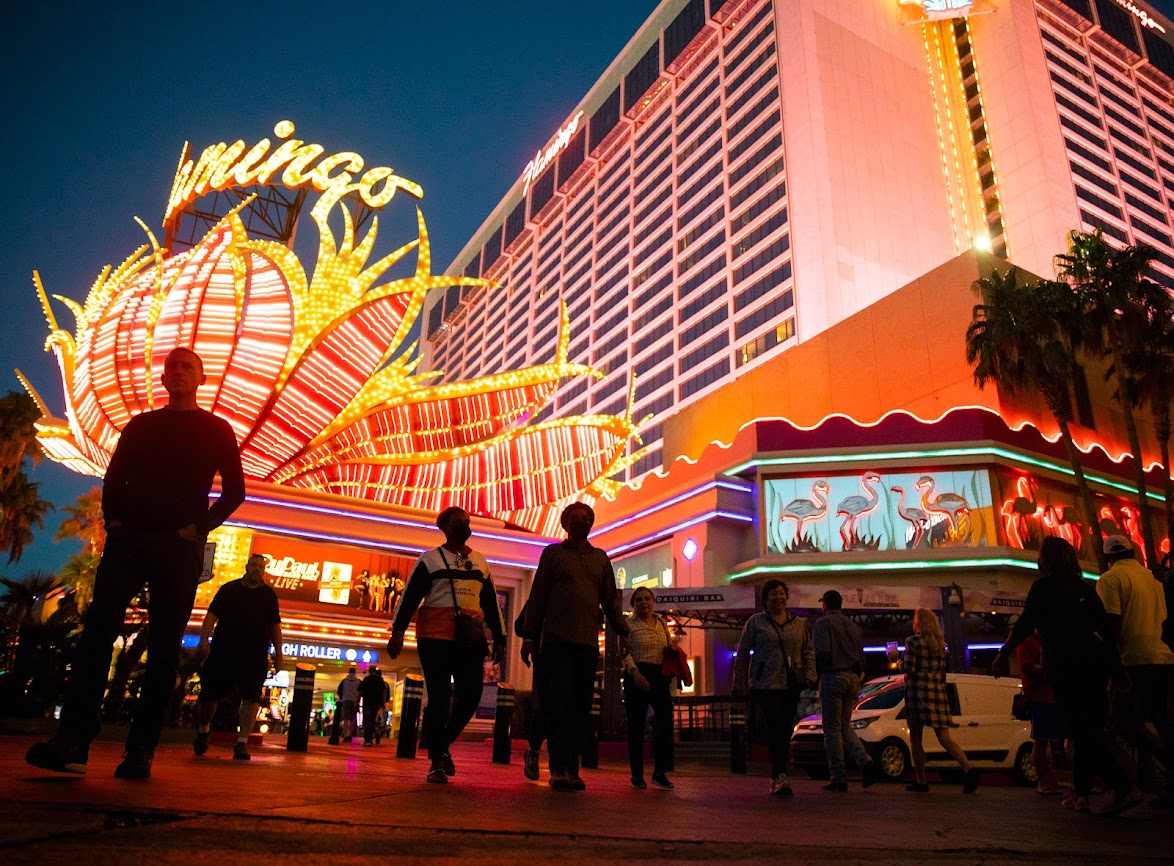 JMP Securities gaming analyst Jordan Bender, in looking at the figures released Tuesday by the Gaming Control Board, said the non-gaming business at Strip resorts is keeping pace with the casino totals.

“Headwinds in the economy have not spilled over into the gaming and consumer segment to this point,” Bender wrote in a research note. “Management commentary during (second-quarter earnings calls) highlights the elevated levels of gaming play and the recovery in group and convention business.”

Statewide, casinos collected almost $1.32 billion in gaming revenue, a decline of 3.2 percent compared to $1.36 billion a year ago, which was the single highest-revenue month ever recorded by Nevada gaming properties.

He noted a UFC event at T-Mobile Arena, three high-profile international soccer matches at Allegiant Stadium and the residency by Usher at Park MGM helped drive Strip visitation in July that overflowed into the casino.

Baccarat revenue, however, declined 13.4 percent to $138 million despite wagers on the game increasing 3.1 percent to $833.7 million. Casinos held almost 16.6 percent of the wagers, compared to a more favorable hold percentage of 19.7 percent a year ago.

Nevada casinos have now recorded their 17th straight month of $1 billion or more in gaming revenue. The state is 15.6 percent ahead of 2021’s record revenue year of $13.4 billion with five months remaining.

Clark County was responsible for $1.23 billion of the state’s overall total during July and marked the 10th time in the last 17 months the region reported $1 billion or more in gaming revenue. Only two Clark County segments saw increases over July 2021 – Laughlin, up less than 1 percent, and a 3.6 percent increase on the Boulder Strip, which includes Henderson.

Revenue from downtown Las Vegas casinos in July was $60 million, a 15.64 percent decline.

Washoe County saw gaming revenue decline 5.3 percent to $94.8 million, with Reno casinos accounting for $69.2 million of the overall total, a drop of 4.4 percent from a year ago.

For the first seven months of 2022, revenue from Strip casinos is 28.2 percent ahead of 2021’s record of $7 billion. Clark County's revenue is 18.5 percent ahead of its record $11.4 billion. Washoe County and Reno are both slightly ahead of their 2021 totals.

Visitor numbers are the largest in two years

Las Vegas saw almost 3.5 million visitors during July, the highest single-month total since the start of the pandemic in March 2020.

According to the Las Vegas Convention and Visitors Authority, the total was 5.7 percent above the 3.3 million Las Vegas visitors in July 2021, but 5.3 percent below pre-pandemic July 2019.

Total hotel occupancy in July hit 83.4 percent and the market had roughly 1,200 more hotel rooms available than a year ago. Weekend occupancy was 91.1 percent in July,while midweek occupancy reached 79.1 percent.

Sportsbooks saw a 51.3 percent decline in revenue during July, due primarily to skewed sports seasons for the NBA and NHL a year ago because of the pandemic.

The July revenue figure of $16.2 million was the result of sports bettors winning their wagers on a more frequent basis. The percentage of wagers won by sportsbooks was almost 3.9 percent. A year ago, sportsbooks won 8.1 percent of the total wagers.

Last year, both the NBA Finals and the NHL’s Stanley Cup Finals took place in July because the schedules were delayed by the pandemic. Both events took place this year in June.

Mobile sports betting accounted for 65.2 percent of total wagers made during July.

For the second straight month and the third time in the last five months, passenger volume was an all-time single-month record during July.

For the first seven months of the year, Reid Airport has seen more than 29.1 million passengers, an increase of 45.1 percent from a year ago.

International air travel continues to show a comeback as the airport saw 256,981 travelers from foreign destinations. The figure was the highest international total since before the pandemic began in February 2020. The international passenger total has increased on a monthly basis since airline service to the United Kingdom resumed in November 2021.