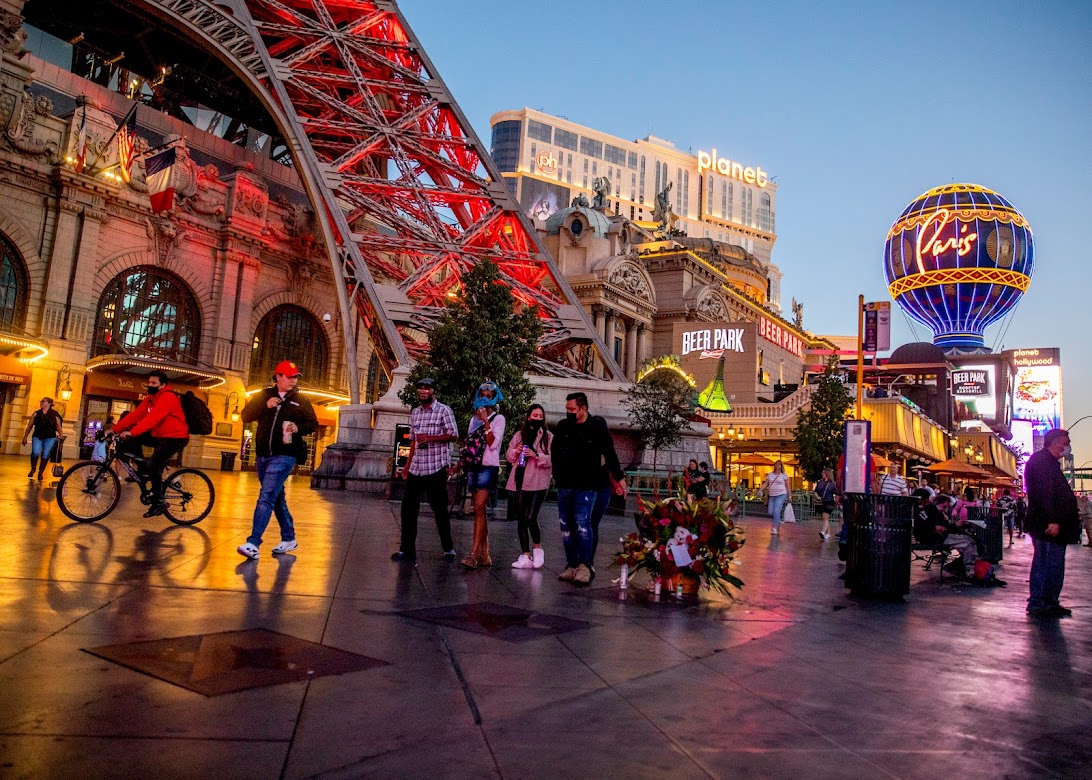 And there is still one month to be added to the 2021 books.

The Gaming Control Board said Wednesday that statewide gaming revenue in November was $1.32 billion, just shy of the single-month record of $1.36 billion reported in July.

November’s totals were a 41 percent increase over November 2019 and marked a record ninth-straight month of more than $1 billion.

Another $1 billion month would smash the all-time single-year number, set before the Great Recession.

Las Vegas Strip resorts collected more than $755 million in gaming revenue during November, a 45.8 percent increase over November 2019. The nation’s largest casino market is already 7.2 percent ahead of its 2019 total of $6.58 billion.

The numbers have defied the forecasts of analysts and gaming industry observers who predicted the state – and especially the Strip – would have a slow recovery following months of pandemic-related shutdowns and operating restrictions. (Gaming analysts use 2019 as a comparison rather than 2020 when the pandemic sent the state’s gaming revenue figures to their lowest totals since the 1990s.)

“We view these results as impressive and supportive of our positive view on the fundamentals on the Las Vegas Strip and Las Vegas locals gaming markets,” Politzer wrote in a research note to investors.

“The leisure customer continues to outperform (the high-end customer),” Beynon said in a research report. “We would note VIP play is starting to see a rebound.”

The Nevada revenue results mirror gaming results across the U.S. The American Gaming Association said earlier this month that commercial casinos nationwide had all but equaled through October their 2019 full-year record of $43.65 billion in gaming revenues.

However, Deutsche Bank gaming analyst Carlo Santarelli cautioned that regional gaming markets would “stiffen” in the second quarter of 2022 and beyond, believing the revenue totals will decline.

“We think the setup for the year is actually somewhat challenging,” Santarelli said.

But that won’t keep 2021 from smashing all records.

Control Board Senior Economic Analyst Michael Lawton said in an email that market segments across Nevada are supporting the strong demand for gaming.

The Las Vegas locals markets – neighborhoods outside of the Strip – have seen gaming revenues increase 18.9 percent above calendar year 2019.

Only two reporting markets, North Las Vegas and Laughlin, are down for the first 11 months compared to 2019.

Washoe County gaming revenue is up 19.6 percent over 2019 through November, and downtown Las Vegas recorded a single-month record of nearly $82.9 million in gaming revenue during November.

“Demand is being buoyed by healthy consumer savings, the sustained rebound of leisure travel, and the return of international flights, other than Canada and Mexico, which allowed vaccinated foreign nationals to travel to the United States beginning on Nov. 8,” Lawton said.

Strip resorts, he added, benefitted from special events in November, including the Specialty Equipment Market Association (SEMA), which returned to the Las Vegas Convention Center on Nov. 2. Lawton said the trade show was the largest convention the city has hosted since January 2020, and it will also be the largest show of 2021.

Nevada sportsbooks reported revenues of $72 million in November, a single-month record that eclipsed the $61.8 million set a year ago.

Sportsbooks also collected more than $1 billion in wagers for the second-straight month. Prior to October, Nevada sports betting operators had never achieved that mark.

The month also showed the continued acceptance of mobile sports wagering, which accounted for $776.6 million, or 71.5 percent, of all sports bets made during November. Lawton said the month represented the highest total recorded in mobile sports wagers since the control board began tracking the wagers in January 2020.

“The continued acceptance of mobile sports wagering by customers is driving these results,” he said, noting that mobile bets accounted for 62.9 percent of total sports wagers in 2021.

The jump in the gaming revenue was not associated with an increase in Las Vegas visitation.

Hotel occupancy in Las Vegas was 77.6 percent during the month, with weekends showing 90.7 percent occupancy.

The LVCVA said the market saw a 5.6 percent month-over-month increase in automobile traffic volume from major highways in November, including an 11.3 percent increase from traffic along Interstate 15 at the California border.

Truist Securities gaming analyst Barry Jonas said Las Vegas visitation benefited from the drive-in customer, “despite high gas prices.” He said the investment community is watching for “any potential COVID impact given the new Omicron variant, though any hit would likely start in December.”

But airport officials cautioned that the emergence of the Omicron COVID variant could play a role in both willingness and ability to travel. On Tuesday, the U.S. set a record for positive cases and Nevada is nearing case levels not seen since early 2021.

The airport was renamed for Reid on Dec. 14. Nevada’s longest-serving U.S. senator and one of the most influential leaders in the state and nation died Tuesday at age 82 after a four-year battle with pancreatic cancer.

International travel accounted for 119,332 passengers in November, including the return of direct flights by Virgin Atlantic and British Airways to and from London.

International travel into Reid is down 81.9 percent through November, compared to the first 11 months of 2019. In December, Reid saw the resumption of nonstop service to and from Amsterdam by KLM and Latin America by way of Copa’s hub in Panama City.

Reid Airport spokesman Joseph Rajchel said the Omicron variant “remains a big point of concern, particularly for Canadian air service as well as travel to and from some parts of Europe which have put new restrictions in place.”