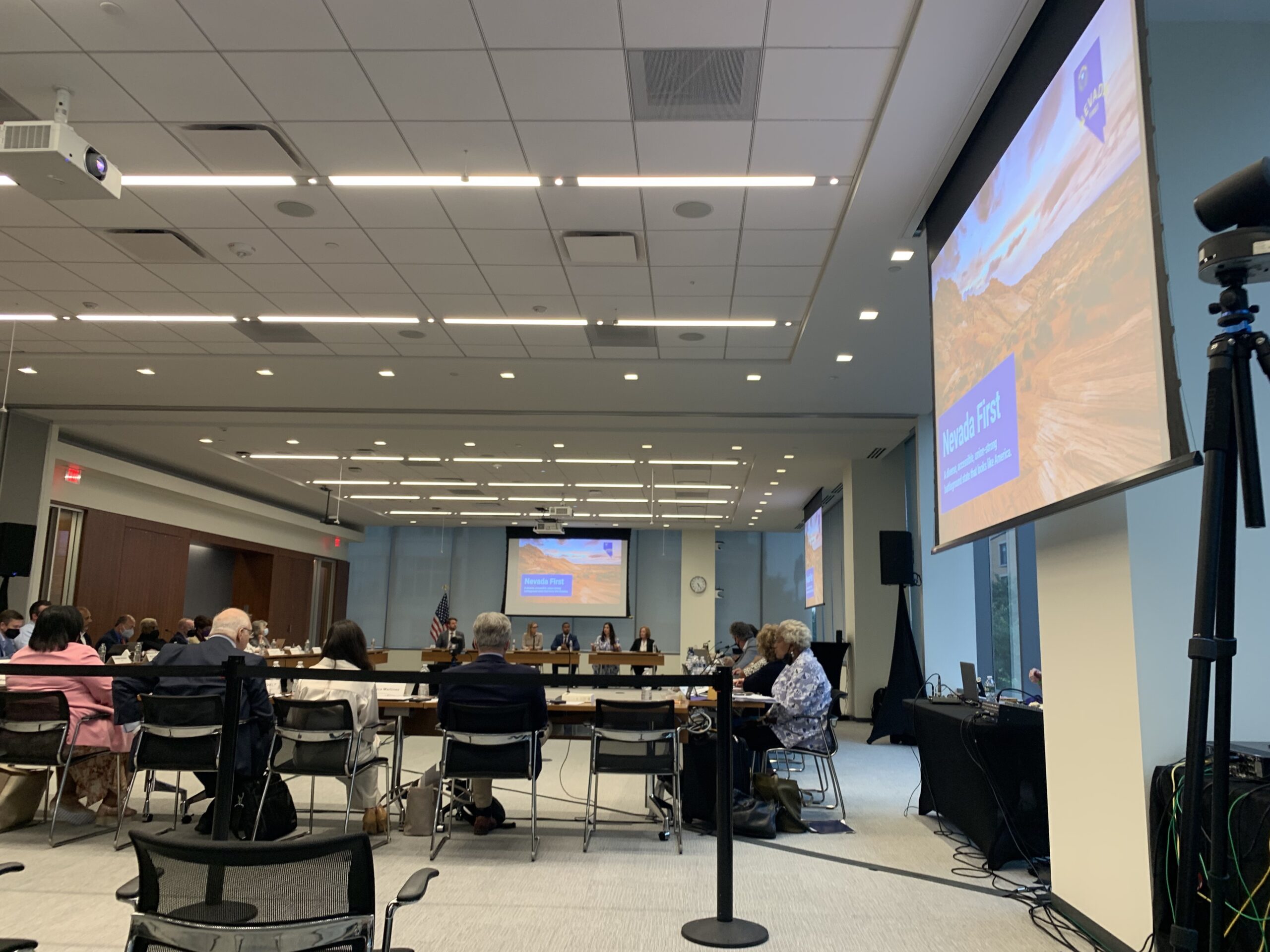 Nevada Democratic Party Chair Judith Whitmer and three other state Democrats made the case to national party officials Wednesday that the Silver State, with a diverse population, a swing-state nature and an ability to hold a fair contest, should hold the first presidential primary of the 2024 election cycle.

“Nevada represents the bright future of the Democratic Party,” Whitmer told the Democratic National Committee’s (DNC) Rules and Bylaws Committee (RBC) Wednesday. “As I hope you will see today, our strengths are uniquely aligned with the RBC's goals in this process, whether it's diversity, competitiveness, or feasibility, the answer is Nevada.”

She also underscored the unity of the party behind the campaign.

“We’re united in this push as one team — the state party, our elected officials, our partners in labor and grassroots Democrats across Nevada,” Whitmer said. “We’re ready to be first, and we have the broad support we need to bring historic change to this primary process.”

Whitmer's comments come after the party split over her leadership. Whitmer was elected state party chair last year and led a slate of Democratic Socialist candidates who took over the party. Their election led to the mass resignation of party staff, many of whom moved to a rival group called Nevada Democratic Victory based in Reno. Whitmer also backed progressive Sen. Bernie Sanders (I-VT) for president over President Joe Biden in the 2020 nominating contest.

But all that appears to have been put aside for the effort to make Nevada the first-in-the-nation primary state.

“When you're going for something like first-in-the-nation, you have to be able to have that coalition and show that everyone in the whole entire state is working together toward one goal,” Whitmer said in an interview after the presentation. “It's not just this faction or that faction. It’s ‘everybody is on board to make this happen.’”

The campaign is spearheaded by a group of former staffers of the late Sen. Harry Reid (D-NV) in partnership with the state party. They include Rebecca Lambe, his longtime political advisor and architect of the Reid political machine.

Nevada became an early state in 2008, an effort pushed by Reid. The Silver State has gone third behind Iowa and New Hampshire in recent primary cycles, even though those two states are not as diverse as Nevada. South Carolina has traditionally held its contest fourth.

The main criteria the RBC is evaluating are diversity, competitiveness, and feasibility of holding a contest.

“When I look at the [RBC’s] criteria, no state is in a better position to be first than Nevada,” Lambe told the panel. “We don't just meet some of the criteria. We meet all of the criteria.”

Lambe was part of the team that made the case for Nevada to be included as an early state in 2006. She argued that RBC was audacious and that adding Nevada and South Carolina has paid dividends by hardening Democratic presidential candidates who can win.

“But more change is needed to make this process truly aligned with our values as Democrats,” Lambe said. “The state that goes first matters. We all know it does. It fundamentally shapes the start of the primary, and how candidates spend their time and resources in the off year. It creates momentum, and it sets the tone for the contests that follow up. It elevates some candidates and not others. And that's why we believe it's so important for the first date to look like America.”

The RBC will select up to five states to hold early primaries. That decision, along with the order of the states, could come as soon as the panel’s July meeting. But the RBC could also push the decision to its August meeting, the last time it is scheduled to meet before the DNC meeting in September, when the RBC’s decisions are to be discussed and likely ratified.

Nevada was the first state to present Wednesday, followed by Colorado and New Hampshire. Seventeen other states will present on Thursday.

“I’d like to think it was a good omen for us,” Lambe said.

Nevada Democrats are also holding their state convention this weekend, which requires preparation on Whitmer’s part.

Along with Whitmer and Lambe, the other officials that presented to the RBC included Yvanna Cancela, chief of staff to Gov. Steve Sisolak. Prior to joining the governor's team, she briefly served in the Biden administration, was a state Senator and is a former political director for the Culinary Union. She is also a DNC member.

Cancela talked about the steps the state has taken to improve voter access, including same-day voter registration, more than two weeks of early voting, universal vote by mail, and Election Day vote centers, which allow voters to cast their ballots in person anywhere in their home county near where they work or live.

“Nevada has also become a national model on how to strengthen our democracy, with some of the most voter-friendly laws in the country, '' Cancela said. “Bottom line: No other state competing for first can match Nevada’s commitment to voter access.”

She also discussed the state’s highly unionized workforce — the state ranks 15th for the percentage of employees represented by unions, according to the Bureau of Labor Statistics.And she underscored the state’s geographic diversity, with urban and rural areas.

“Many states this week are going to make claims about their diversity,” McCurdy said. “Nevada is in a category of its own. We are a majority-minority state, and the third-most diverse state in the country. We are a microcosm of the country, and a reflection of America’s present and future.”

“Last cycle, Nevada was by far the closest battleground of current early states,” he said. “President Biden won by just 2.4 percent. Nevada is fundamentally a purple state by every metric.”

After a 15-minute presentation, the four took questions for 20 minutes from the 32-member RBC panel.

Panel co-chair James Roosevelt asked about the secretary of state race in Nevada. Lambe explained that the current officeholder is Barbara Cegavske, who is a Republican. She is term-limited and the recent primary saw Former Assemblyman Jim Marchant win the nomination. Marchant is an ardent supporter of former President Donald Trump and has said he would not have certified the 2020 election despite there being no evidence of impropriety.

“This is one of our highest priorities in the state of Nevada,” Lambe said. “Looking at what is happening across the country and the attacks on these election officials, we recognize how important this race is.”

The group’s presentation included a video that featured Sen. Catherine Cortez Masto (D-NV), the state’s first and only Latina U.S. Senator; Rep. Steven Horsford (D-NV), vice chair of the Congressional Black Caucus; Astrid Silva, a nationally renowned immigration activist based in Nevada; and Frank Hawk, a Henderson resident who is president of the Southwest Regional Council of Carpenters.

“In this party, choosing a president to lead America should start with a state that looks like America,” the video said. “It’s time to admit: Tradition is not a good enough reason to preserve the status quo. Our country is changing. Our party is changing. The way we choose our nominee — that has to change, too.”