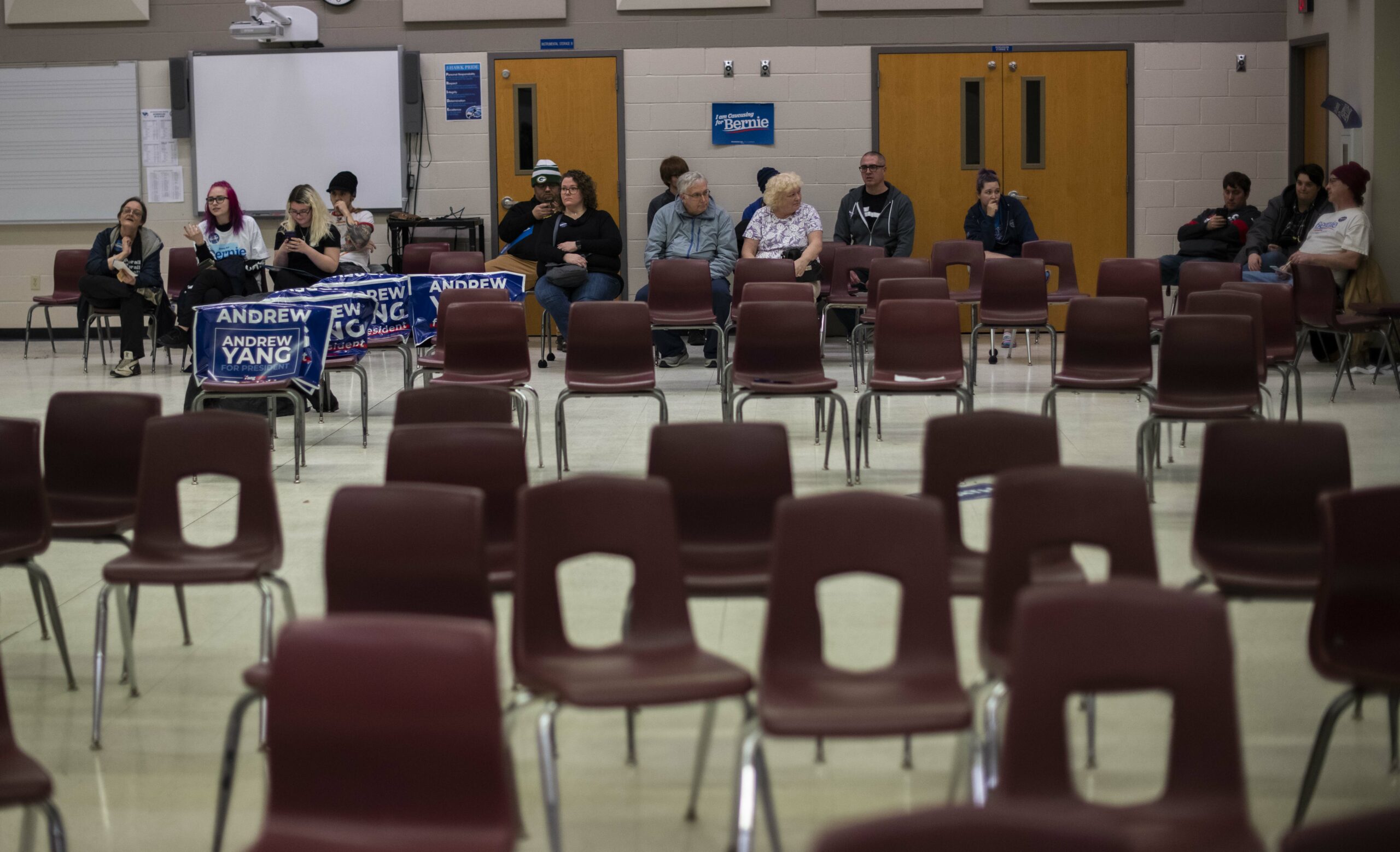 Nevada Democrats, the day after their counterparts in Iowa held a problem-riddled caucus, sought to calm the nerves of voters, the media and other interested observers Tuesday.

The statement released by the party was short, but its message was simple: What happens in Iowa, stays in Iowa.

But it’s going to take a lot more than that to assuage the fears of the public — and campaigns — in the wake of Iowa’s first in the nation presidential nominating contest on Monday, which left the public clueless about who the victor was for roughly 20 hours. The Iowa Democratic Party finally released almost two-thirds of the results Tuesday afternoon, showing former South Bend Mayor Pete Buttigieg and Vermont Sen. Bernie Sanders neck-and-neck in the race, but remained vague about its timeline for releasing the rest of them.

The Iowa Democratic Party has blamed the delay in reporting results to a “coding error” in their app, casting doubt on the future of Nevada’s Feb. 22 caucus, which was slated to lean on not only one but two different apps to proceed smoothly. Nevada State Democratic Party spokeswoman Molly Forgey confirmed Tuesday afternoon that the political technology company Shadow Inc., which was responsible for developing the problem-plagued Iowa caucus app, also developed the two Nevada apps. The party has since terminated its relationship with Shadow and is currently looking into other alternatives for its upcoming caucus.

That could mean switching entirely to a paper system, which already existed as a backup option to the app-based system but would be a time- and labor-intensive process, or something else entirely. Forgey said that the party is exploring all options at this time.

Earlier Tuesday, Nevada State Democratic Party Chair William McCurdy had sought to distance the party from the prior night’s fiasco in Iowa in a statement. He promised that Nevada Democrats would not use the same app and vendor that Iowa Democrats used for their contest and said that he could “confidently say” that the problems experienced in Iowa will not be repeated in Nevada. Democratic leaders in Nevada also sought to bolster confidence in Nevada’s caucus process on Tuesday, with Gov. Steve Sisolak and former Senate Democratic Leader Harry Reid both chiming in on the matter in tweets.

“In Nevada, we have built the best state party operation in the country,” Reid said. “I am 100% confident that what happened in Iowa will not happen in Nevada.”

For at least some campaigns on the ground in Nevada, though, the party’s general assurances haven’t been enough. A Democratic presidential campaign operative in Nevada, who was not authorized to discuss the matter publicly and spoke on the condition of anonymity, said there are still serious questions the party needs to answer.

“I think it’s imperative that the state party give some sense to all the campaigns on the ground in Nevada of what is in store for their Caucus Day,” the staffer said. “If what happened was an isolated incident in Iowa because of X, Y and Z, then they are owed the X, Y and Z reasons why what happened in Iowa and isn’t going to happen in Nevada. If they think everything is going to be fine, then tell us that and tell us why.”

Iowa Democrats said Tuesday that the coding error in their app did not harm the underlying data reported by precinct chairs but caused discrepancies in the numbers being sent to the party. Still, it proved cause for concern in Nevada, where two different apps were slated to be used to carry out the early voting and Caucus Day portions of the state’s nominating contest.

In December, Democratic officials revealed the first details of how those two apps were supposed to function. The early voting app, which was to be be downloaded onto more than a thousand party-purchased iPads and distributed to sites across the state, was designed to collect the top five presidential preferences of caucusgoers. Those choices were to then be transmitted electronically to a second app, designed for precinct captains, and counted alongside in-person caucusgoers’ preferences, just as if they had been there in person on Caucus Day.

In addition to being a home for the early vote data, the second app was designed to walk precinct captains step-by-step through the caucus process, automatically calculate the caucus math and transmit final results to the state party.

Where the Iowa Democrats’ app was shrouded in secrecy until right before the caucus, Nevada Democrats had been relatively open about discussing how their apps were supposed to function, so long as it did not cross into the territory of what they consider sensitive information that might compromise the security of the apps, such as the name of their vendor.

But the party’s executive director, Alana Mounce, in an interview with The Nevada Independent last week, detailed some of the security precautions and preventive steps that the party has taking to ensure the integrity of the caucus process. For instance, the Democratic National Committee put on a so-called tabletop exercise, attended by Department of Homeland Security officials, to vet Nevada’s caucus process.

The exercise involved throwing problems — sometimes multiples at a time — at state party officials to see how they’d respond. Mounce said the exercise helped the party vet its incident response plan, which covers everything from what to do in the event of inclement weather to how to respond if an emergency situation arises at a caucus site, and identify gaps, though Mounce did not elaborate on what those specific gaps were.

“In many ways, it validated the scenarios we’re working through and the steps we’re taking,” Mounce said. “It also helps illuminate areas where we can continue to expand on our planning and build out our responses.”

The party had also established a number of backup processes, should the technology it plans to rely on fail — some of which it may now may rely on to run as its first-choice option to run the caucus.

With the apps, precinct chairs were supposed to, at some point before Caucus Day, connect to the internet to download the early vote data for their precinct. Party officials said the data wouldn’t be accessible by the precinct chair until the caucus’s noon start time and they had reached the appropriate step in the caucus process for it to be disclosed. The number of early voters for that precinct, for instance, were to be available at the start of the caucus, but the precinct chair wasn’t supposed be able to see who they caucused for until it’s time to enter the results of the first alignment.

In the event that the precinct chair was not able to access that early vote data, party officials had planned on having a hotline to call to receive that information and calculate the results manually. Precinct chairs were also going to be able to call in the results of their caucus in the event the app malfunction. Nevada has more than 2,000 Caucus Day precincts this year, where Iowa had about 1,100.

Party officials also have visited every early vote and Caucus Day precinct to do quality checks of the sites and ensure that they are able to give volunteers specific instructions pertaining to each site. While there, staffers vetted whether the spaces are big enough to hold the number of people they anticipate showing up, whether they are accessible for caucusgoers with disabilities and whether there are enough chairs in the room to seat everyone.

Mounce also reiterated in the interview last week that the party had worked with security experts and the Democratic National Committee since the beginning of the process of developing the caucus changes.

Like Iowa Democrats, Nevada Democrats will report multiple numbers after the conclusion of the caucus, including the raw number of people who supported each candidate on the first pass and the totals after supporters of candidates who didn’t meet a minimum threshold to qualify for delegates realign in support of their second choice. Historically, the party has only reported the number of delegates secured by each candidate.

Iowa Democrats attributed at least some of the difficulty with getting the results out in a timely fashion on Monday night to the fact that they were required to report out multiple sets of numbers, and identifying discrepancies between those numbers. Since Monday, the party has been taking the extra step of verifying totals reported through the app against a papertrail.

“As precinct caucus results started coming in, the IDP ran them through an accuracy and quality check,” the party said in a statement. “It became clear that there were inconsistencies with the reports.”

The Nevada State Democratic Party has not yet addressed how the reporting of the different totals on Caucus Day might also affect their operations.