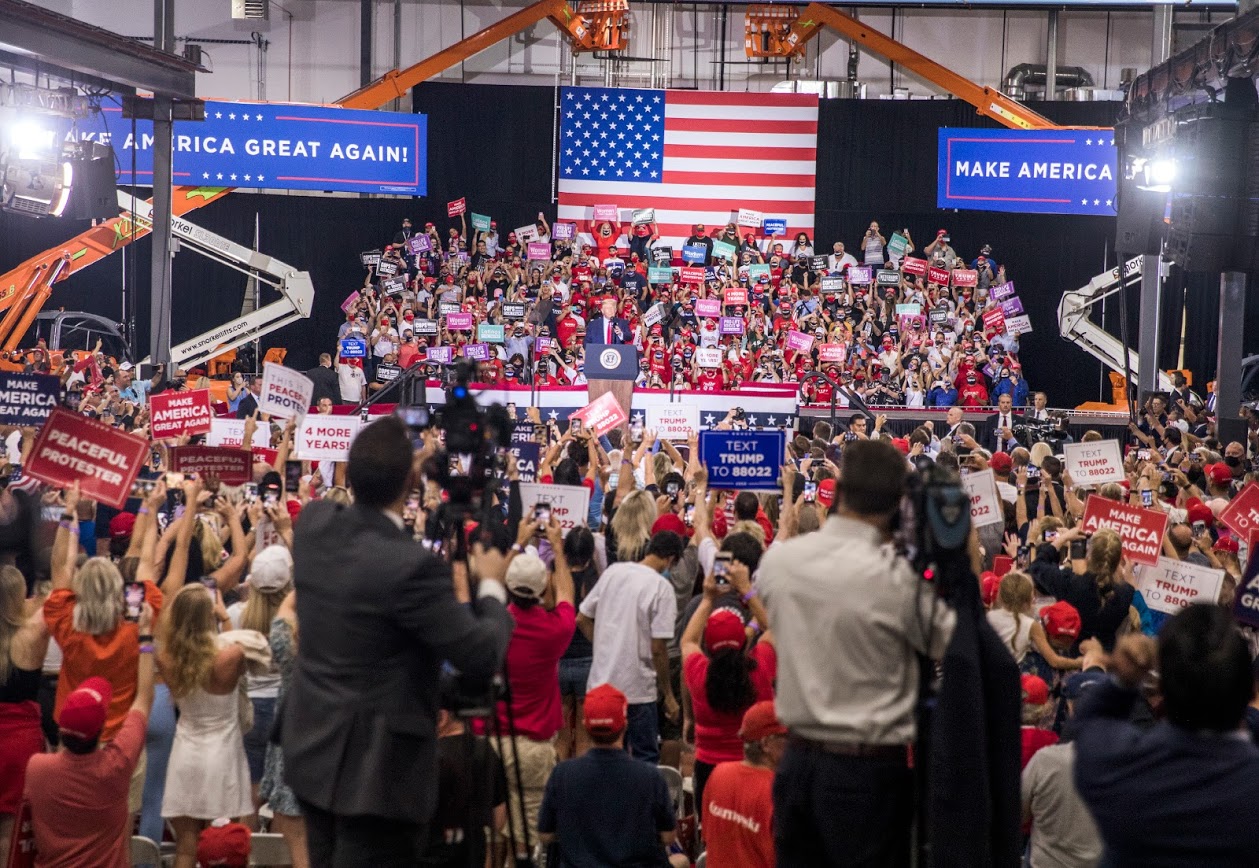 Top officials leading Nevada’s coronavirus response are projecting an uptick in COVID-19 cases in the coming weeks, noting the crowds over Labor Day weekend and two campaign rallies held by President Donald Trump in defiance of state health and safety directives this weekend.

Caleb Cage, Nevada’s COVID-19 response director, called the Labor Day crowds “concerning” and said that Trump rallies held in Minden and Henderson this weekend attended by thousands of people not only defied a state emergency directive limiting public gatherings to 50 people but are “very much a challenge to our ongoing efforts to make sure that we’re not suffering from the consequences of this pandemic in an unnecessary way.”

Though the Trump campaign provided temperature checks and handed out masks to supporters, there was little to no mask-wearing at either rally this weekend. About 5,600 people packed into an Xtreme Manufacturing warehouse in Henderson to attend the Trump rally Sunday night; there was no official crowd count for Trump’s outdoor rally at the Minden-Tahoe Airport Saturday night, though estimates put the figure in the thousands.

Trump’s last indoor rally, in Tulsa in June, was linked by local health officials to a spike in cases there. Julia Peek, deputy administrator for the Division of Public and Behavioral Health, said that health officials will be able to collect information during their contact tracing investigations that will shed light on how people may have contracted the virus.

“We’ll certainly be looking at the data related to any of these events,” Peek said.

Cage called the projected growth in cases “unfortunate” because the state is just now seeing several steady weeks of decline in COVID-19 cases. As of Monday, an average of 254 new COVID-19 cases have been reported each day over the last seven days, down from a high point of 1,176 cases in late July.

Cage also acknowledged a report on social media that someone who attended one of Trump’s rallies this weekend was positive for COVID-19, though he said he had yet to see that information confirmed. But he said the report underscores “why we have directives in place.”

“We need to observe the directives, the laws that are in place in the state of Nevada during this public health pandemic and also I’d point out that those restrictions are not terribly different than the restrictions recommended by the White House and the administration,” Cage said.

According to the White House’s own recommendations, gatherings in “red zone” counties, like Clark County, where Henderson is, should be limited to 10 people or fewer.

Peek recommended that anyone who attends any gathering where people were not wearing masks should get tested for COVID-19 five to seven days after their exposure. She also encouraged people who have attended such gatherings to be particularly cautious if they live in a multigenerational household with vulnerable family members.

“If you were at an event where individuals were unmasked and in close proximity together — be it at a rally or be at a barbecue — you were potentially exposed,” Peek said.

Cage encouraged communities, organizations and public and private entities to “continue to follow the law.”

“I don’t think that’s a controversial thing to say — to continue to follow the law in respect to our response to this pandemic and to continue to take steps to protect their visitors and their residents,” Cage said. “And we could ask the same of political organizations.”