Nevada politicians want to sue the federal government over public land, and they can. But then what? 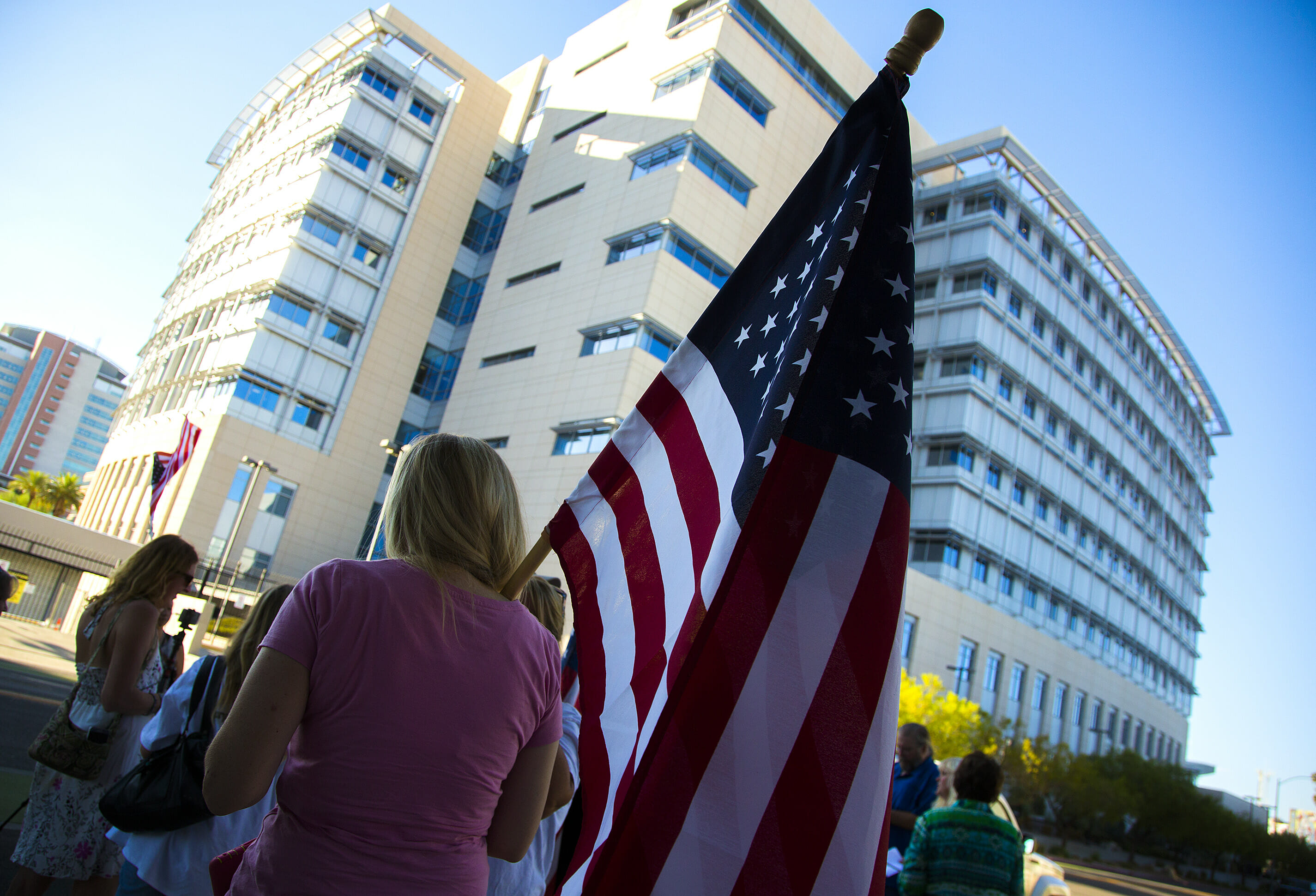 In 1979, the Legislature authorized the “Sagebrush Rebellion Act."

In it, Nevada declared the state’s legal claim to federal land and supported litigation to wrest control from the federal government. By 1983, Nevada had a case in which to push the question, but it demurred.

The thought that Nevada could sue the federal government over the ownership of its public lands is not a new idea, and it’s come back during this election cycle with several politicians promising lawsuits if they get positions in state office. In doing so, they have reopened a legal debate about the role of the federal government dating back to the Revolutionary War.

Can a Western state sue the federal government over public lands? Perhaps. Politicians have a long track record of calling on their states to brief these lawsuits and take them to the Supreme Court. There are decades of political precedent for this. But political precedent is one thing.

The real question is whether any of these lawsuits could succeed.

The issue re-emerges in Nevada

For years after the 80s, the idea lay dormant among Western attorneys general and support seemed to wane. During cases in the 1990s, several Western ranchers echoed the arguments made during the Sagebrush Rebellion. Yet in one case involving a Nevada rancher, the attorney general’s office supported the position that the U.S. government had jurisdiction over the land.

In the first footnote of that 1997 decision, a 9th Circuit judge noted the “significance” of this: “An amicus brief was filed on behalf of the states of New Mexico, Alaska, Maine, Montana, Oregon, Vermont, and, significantly, Nevada supporting the position of the United States in this case.”

“This comes back like cicadas every 20 years,” said John Freemuth, a Boise State professor and public lands expert. “And every time, people rebut it with strong legal arguments.”

For several years, Utah officials have been exploring legal action to force the U.S. government to turn over public lands that fall within the state’s boundaries. They have spent taxpayer dollars on studies and even OK’d funding for a $14 million lawsuit. The case has yet to be taken up.

In Nevada, the thought of a state lawsuit against the federal government re-emerged with the Bundy Ranch standoff in 2014 and the subsequent occupation of Malheur National Wildlife Refuge in Oregon two years later. Mesquite-based rancher Cliven Bundy and his sons have long argued that the federal government does not have constitutional jurisdiction over public lands. Bundy has argued that the state and county did not do enough to support his cause. Last week, Ryan Bundy, one of Cliven Bundy’s sons, filed paperwork to run for governor as an independent.

“The state of Nevada needs someone who will stand up for statehood, and recognize that Nevada is a sovereign state, not just a province of the U.S,” Ryan Bundy told The Nevada Independent.

By centering his bid around public lands, it’s possible that he will push the other candidates, including Attorney General Adam Laxalt, to take a position on whether Nevada should be involved in a lawsuit seeking to force the federal government to turn over public lands.

The question is also expected to come up in the race for attorney general. Craig Mueller, a Las Vegas-based defense attorney, is running to be the state’s chief litigator. In an interview with the Independent, he said, if elected, one of his primary goals would be to use the office to support a legal challenge to the ownership of Bureau of Land Management lands within the state (the BLM controls about 67 percent of Nevada land, managing it for grazing, wildlife and energy development).

‘No legal basis for a court action’

Almost all scholars see a political remedy — congressional legislation — to fighting the federal government’s control over Western public lands, yet even some who support transferring public lands to the states believe the legal remedy — litigation — stands on a disputed foundation.

In 2016, the Conference of Western Attorneys General, which represents Democrats and Republicans, said as much in a report obtained by the Associated Press. These sentiments were echoed by Idaho’s Republican attorney general at a Boise State conference last year.

“My office undertook an extensive analysis of the case — of the cases and the legal history of federal land ownership — and concluded that there was no legal basis for a court action seeking to force the United States to turn these lands over to the state,” said Idaho Attorney General Lawrence Wasden, according to a white paper of the conference proceedings.

He added: “We encouraged the legislature to take their concerns to Congress because ultimately, the power to transfer public lands to Idaho resides in Congress, not in the courts.

Moreover, the Western states, including Nevada, have clauses in their constitutions that “disclaim” their rights to unappropriated public lands. The oft-cited exception is Texas, which was a sovereign country at the time of its admission and was allowed to keep its public land.

“There’s no case to be made that any federal court would pay attention to,” he said.

Statehood and public lands: An issue since 1776

There has been an active argument over public lands since before the nation’s founding. There was a debate over western land during the Articles of Confederation. At this point in the nation’s history, western land was all that lay past the Appalachian Mountains. Seven of the 13 colonies, which had somewhat unclear boundaries, had arguable claims on land to the West.

Six colonies did not and they balked at the idea that the other colonies should get to keep their western land. “The stalemate left the nation without a formally constituted government at the very time it was fighting to gain independence,” writes John Leshy, a professor emeritus at UC Hastings Law School, in a recent 80-page paper on the development of public lands law.

The seven colonies gave up their claims and the Articles were ratified. A few years later, the Constitution and discussion around it generally gave Congress the power to decide how to manage federal public lands, Leshy writes, and it has as new states have joined the Union.

That settled very little. The topic remained a heated issue in the first half of the 1800s, as the U.S. began purchasing western territory. Congress started working to divest its public land for settlement, according to Leshy’s historical analysis, but many thought this process went too slow.

That was when a legal course for ceding public lands began to take hold.

Around this time, Leshy writes, an Alabama senator challenged the establishment view at the time (and now) that the U.S. had no legal claim to public lands. The argument went nowhere in Congress, but the senator, John McKinley, was later nominated to the Supreme Court, where he authored an opinion Pollard  v. Hagen (1845), limiting Congress’ power over the Property Clause at a time when that power had become central to the political question of abolishing slavery. The Pollard decision is sometimes cited by advocates of a legal public lands remedy.

The Supreme Court limited the power of the Property Clause further in its infamous Dred Scott v. Sandford (1857) decision. While remembered as one of the inflammatory moments that led to the Civil War, Chief Justice Roger Taney’s opinion, Leshy writes, also declared that the Property Clause only applied to lands belonging to the United States when the Constitution was signed.

Then the Civil War happened.

After the war, the Supreme Court began deferring to Congress again in several rulings.

“In hindsight, these [post-war] decisions reaffirming Congress’s broad powers over public lands were inevitable,” Leshy writes. “The Civil War changed forever the attitude of the American people about national power in relation to the states…. To [uphold the Pollard and Scott interpretations on public land] would have been tantamount to insisting to Congress that, if it wanted to admit a new state into the Union, it would necessarily be relinquishing all control over all public lands in that state. To say Congress would have difficulty accepting this is to understate the matter.”

But the issue still remained a political football, as it does today. In the 1970s, Congress began passing environmental laws that engendered a backlash in rural communities with natural resource-economies that revolve around activities like ranching, mining, drilling and farming. These laws included the National Environmental Policy Act, the Clean Air Act, the Clean Water Act and the Endangered Species Act. In 1976, Congress passed the Federal Land Policy and Management Act, which ordered federal land managers to manage public land for multiple uses.

This, in part, is what sparked the Sagebrush Rebellion at the end of the 1970s.

Litigation and debates in Congress came up here and there through the 1990s. But the issue of federal land management came back to national attention in 2014 with the Bundy standoff near Mesquite, about 80 miles from Las Vegas, and a federal case in which prosecutorial misconduct led to a mistrial this year. As Ryan Bundy runs for governor, it will likely remain in the headlines.

"This is a political argument,” Leshy said in an interview. “It's not a legal argument."

Legal experts like Leshy said that there is a remedy for those who want to convey more federal public land to the states. That remedy is the U.S. Congress. And the Nevada delegation has, in the last several decades, been successful in passing bills that allow the federal government to sell off small pockets of federal land to the states. In fact, Clark County is in the midst of pushing for a bill that would expand the amount of land BLM can sell to homebuilders and developers.

The wholesale cession of public lands to the states has been more difficult.

At the start of last year, some land transfer proponents, such as the Nevada Lands Council, were hopeful the Trump administration would be amenable to giving public land to the state. Since then, Department of Interior Secretary Ryan Zinke has made it clear that he does not support the wholesale conveyance of public land to the states. Zinke has come out in support of opening more land to leasing, development and the possibility of small, targeted land transfers.

The politics are also complicated.

When congressional representatives, such as Northern Nevada Rep. Mark Amodei, have introduced land transfer legislation, they have faced backlash from hunters and fishers, in addition to conservationists. Off-road vehicle enthusiasts don’t want more protections on the land but they also worry about what would happen if federal land is open to development.

The Utah lawsuit petered out after Justice Antonin Scalia died, the Nevada Lands Council and several politicians have said. They hope the lawsuit will resume now that Justice Neil Gorsuch is sitting on the Supreme Court.

But it’s unclear that the Court will reverse course from years of precedent, legal experts said.

"It's already been tested,” Blumm said. “It's been decided."