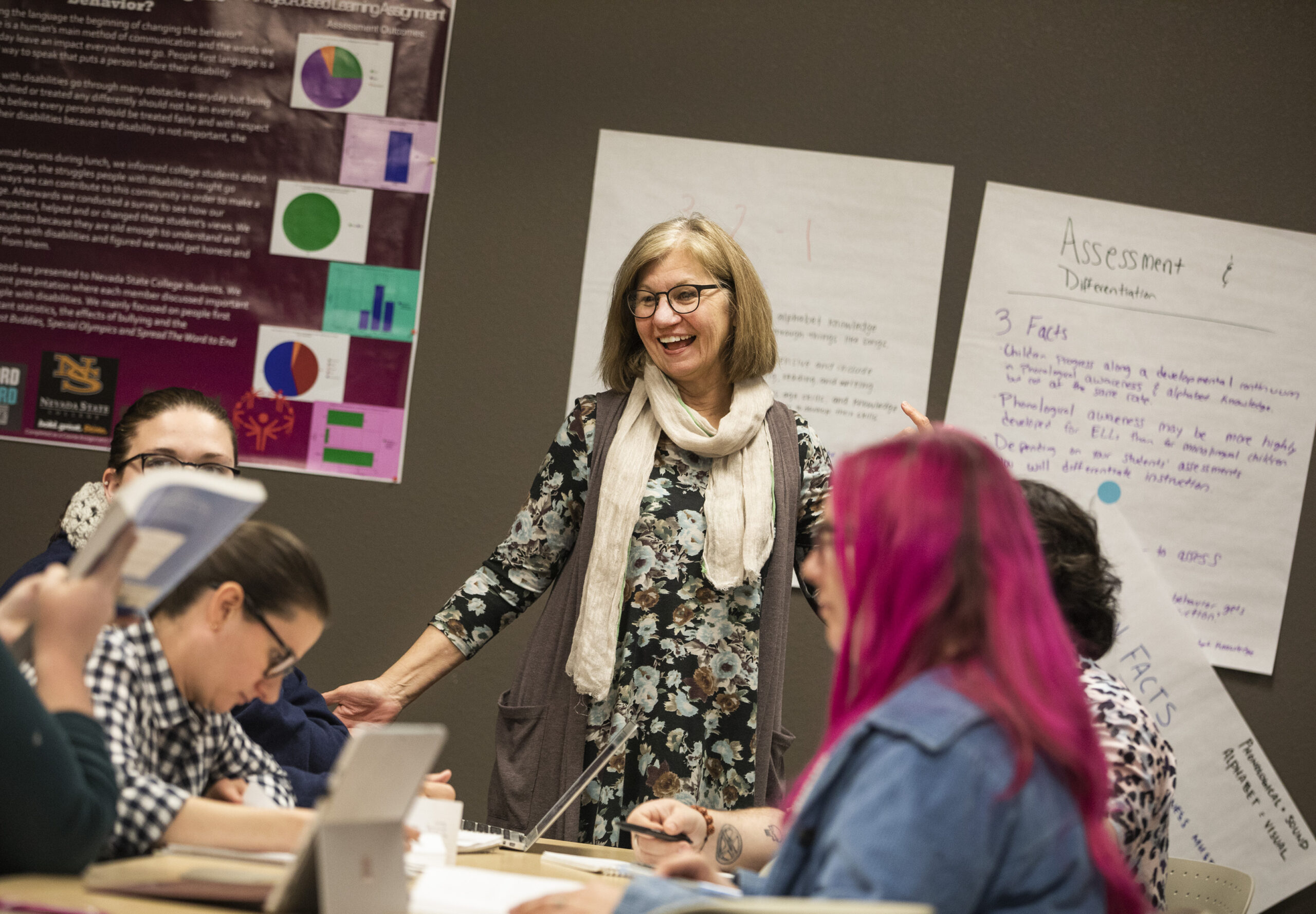 The vision for Nevada State College started with a kitchen-table conversation among Henderson leaders.

It was 1998, the same year the opulent Bellagio hotel and casino opened its doors, ushering in a new era on the famed Las Vegas Strip. The building boom brought three more mega-resorts — Mandalay Bay, Paris and Venetian — into existence the following year. Tourism skyrocketed and so did Southern Nevada’s population. Suddenly, the desert city needed teachers and lots of them. And so the wheels started turning to launch a four-year state college that would train them.

Nevada State College, then consisting of three classrooms and a library, welcomed its first batch of students in 2002. Seventeen years later, the mission remains the same because the need hasn’t substantially changed. The Clark County School District began this academic year with roughly 530 vacant classroom positions. More than halfway through the year, the district still has 432 unfilled classroom positions.

Dennis Potthoff, the dean of education at Nevada State College, says the view from his office window serves as a daily reminder of that mission.

“Take a look out there,” he says, gesturing to the suburban sprawl beyond the glass. “You can see 73 percent of all the kids in Nevada from this window.”

Those students — and the 27 percent that reside elsewhere in Nevada — deserve licensed teachers leading their classrooms, he said. The college has embarked on a campaign, dubbed “Teachers Now,” that aims to plug the teacher shortage by drawing more Nevada residents into the field, keeping their student debt low and providing polished education programs and learning spaces.

The ongoing effort is punctuated by strife in the education world. Already this year teachers have gone on strike in Los Angeles and Denver, lobbying for higher pay and, in some cases, better working conditions. Others are simply leaving the profession. The Learning Policy Institute estimates that teacher attrition is about 8 percent annually in the United States. And roughly two-thirds of educators leave for reasons other than retirement.

The teacher flight doesn’t faze Potthoff, though. He is optimistic the college’s recruitment plan — including a snazzy new building just for budding educators — will put the state a step closer to fixing its teaching pipeline problem.

The fledgling college campus sits at the base of Mount Scorpion in Henderson, surrounded by mostly undeveloped land. But if lawmakers approve Gov. Steve Sisolak’s proposed budget, shovels could hit the ground soon.

Nevada State College (NSC) has raised $6 million for an education building, and Sisolak announced in his State of the State address that his budget would include funding for the remaining amount. The total cost is projected to be a little less than $62 million, NSC officials said.

Architectural renderings show a window-covered, modern building replete with colorful accents on the exterior. The education building will house a speech language clinic as well as an early education center, both of which will serve families in the community while providing academic opportunities for students. (NSC is launching its first master’s degree program in the fall, and it will be for speech pathology.)

“So the building, it’ll bring classrooms … but more than that, it’s going to ring a couple of really powerful new laces for our valley to serve kids and families,” Potthoff said.

By the college’s calculations, the education school could produce 401 graduates by the 2025-2026 academic year — a more than four-fold increase. The projected number of graduates this year is 76.

NSC leaders say they’ve developed a 13-point plan to reach those graduation numbers. The plan includes increased marketing efforts, more robust scholarship programs, greater ease transferring credits and a stronger emphasis on high school level-career preparation, among other things. It boils down to not only enticing more students to the field but also ensuring they remain in the education program and graduate.

“Is it easy to recruit teachers right now? No, not particularly,” Potthoff said.

But enrollment numbers at Nevada State College have been relatively stable. The number of students in the education department has grown during the past five years — from 686 in fall 2014 to 773 in fall 2018 — despite a small dip in 2015.

Studies have indicated that national enrollment in teacher education programs decreased by 30 percent between 2008 and 2013. The downward trend doesn’t seem to be continuing in Nevada, at least not in recent years. UNLV also reported consistency in its education department enrollment. In the fall, 552 students were enrolled in UNLV’s traditional education program and another 839 were enrolled in an alternate route-to-licensure program.

Danica Hays — an author of the 2018 Nevada Teacher Workforce Report — said community efforts to promote teaching as a valuable career seem to be taking root.

“I am very confident that the efforts we are doing will work because we are being more targeted,” said Hays, who’s an executive associate dean and professor within UNLV’s College of Education.

Hays said research about what’s causing teacher turnover as well as more strategic recruitment efforts — high school educator academies and dual enrollment opportunities, for instance — are helping address the state’s pipeline problem. Although Clark County receives the most attention for its large number of vacancies, the workforce report points out that shortages can be just as acute, if not worse, in Nevada’s rural areas, where it’s often more difficult to recruit licensed educators.

Long-term success likely hinges on an approach that blends better recruitment strategies on the front end with strong mentorship after graduation, said Daniel Espinoza, a research and policy assistant at the Learning Policy Institute, a nonprofit and nonpartisan education research organization.

“It’s attention to every stage of a teacher’s preparation and career,” he said.

On a recent morning, a classroom inside East Career and Technical Academy buzzed with activity. The oldest students — high school juniors — guided the youngest — preschoolers — through various lessons. Some decorated heart-shaped construction papers, while others tried on hats representing various careers.

Linda Pheasant, an early childhood education teacher at ECTA, strolled the room, observing and sometimes offering feedback. She’s one of two teachers who run the school’s education program, which prepares students who have an interest in teaching. As part of the curriculum, 11th-graders operate the Tiny Titans Preschool — a learning environment within a learning environment. Pheasant jokes that she has the best job teaching both high schoolers and preschoolers simultaneously.

“Sometimes I just let them go with whatever it is because they learn a lot from a lesson not going well,” she said, referring to the 11th-graders running the classroom.

This year ECTA’s education program partnered with NSC and became part of its Teacher Academy Pipeline Project (TAPP). High school seniors enrolled in the program take dual-credit courses that give them a headstart on college, not to mention a cost savings. TAPP is a core aspect of the college’s plans to expand its own education program.

It’s essentially a “grow your own” concept that recruits promising future educators early and introduces them to the classroom before they step foot in college. NSC has five teacher academy sites at Clark County high schools. UNLV has a similar program and partners with other sites, including Clark High School.

Officials from both NSC and UNLV say they’re not competing for students. They’re simply trying to reverse the state’s teacher shortage regardless of whether the high school students wind up attending UNLV, NSC, College of Southern Nevada, UNR or somewhere else entirely.

“It’s different talking to somebody about teaching and putting them in a third-grade classroom and letting them help some kids for a day,” Potthoff said. “Sometimes they walk out of there going, ‘You know what? That’s pretty cool.’ You’ve got to provide some opportunities for them to look at it in a different light than being a student.”

Not all students major in education upon entering the college. But there are students like 16-year-old Maria Valenzuela who epitomize the program’s mission.

She beams when talking about education and wants to pursue her teaching degree locally but hasn’t chosen a school. For Valenzuela, the teaching bug started the summer after seventh grade when she volunteered at an elementary school with her former kindergarten teacher. Now, her parents tease her when she tears up talking about her experiences teaching children.

Valenzuela has her sights set on becoming a first-grade teacher and says she isn’t deterred by some of the negativity — stagnant pay, large class sizes, heavy workloads — surrounding the profession.

“I want to do that because it’s going to make me happy,” she said. “At the end of the day, if you’re doing something you don’t like, what’s the point?”

It’s a viewpoint echoed by Michelle Verporter, an NSC student who’s a few courses away from earning her special-education endorsement for her bachelor’s degree. A mother of five who is pursuing her academic dream at age 43, Verporter says she can’t imagine leaving the profession. She’s already serving as a long-term substitute for special education at Green Valley High School.

“I haven’t really found anything I don’t like,” she said.

After all, it comes down to a numbers game — more graduates means more teachers and, thus, more students with licensed educators leading their classrooms. If NSC’s projections pan out, the future could look something like this: 82 education graduates next year, 139 the following year and so on before reaching 401 graduates seven years from now.

Somewhere in there, Valenzuela could be one of them.