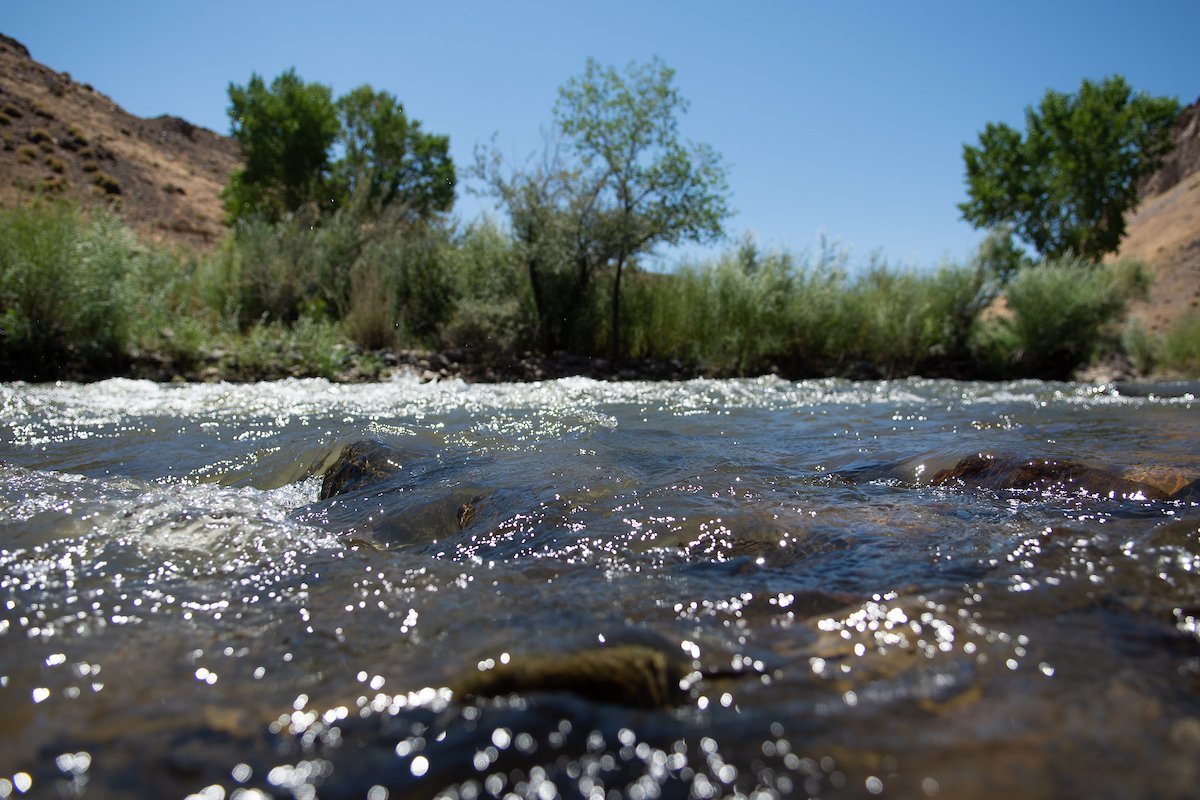 The Nevada Supreme Court heard arguments Tuesday in a case weighing how state regulators should consider “public trust” values — the environment or recreation — when the sustainability of lakes or rivers could be harmed by how the state has allocated water rights.

The questions before the court stem from ongoing federal litigation over the use of water in the Walker River. But the case has received significant attention because it could provide an opportunity for the state's top court to bolster legal protections for the environment. At the same time, agricultural groups, businesses and municipal water users fear a broad ruling could upend their existing water rights.

“In this case, the court really has the opportunity to define what the Public Trust Doctrine means when applied to water rights in Nevada,” said Bret Birdsong, a UNLV law professor and a former deputy solicitor for the Department of Interior who filed an amicus brief in the case.

The Public Trust Doctrine is a legal concept essentially stating that governments are responsible for protecting natural resources for the public’s benefit. Although the Supreme Court has recognized the Public Trust Doctrine, it has not definitively stated how it should apply to settled water rights, seen as a form of property. Can the responsibility to protect the “public trust” outweigh existing rights?

In 2018, the 9th Circuit Court of Appeals formally asked the Nevada Supreme Court to weigh in. And the hearing on Tuesday was the first step in getting an answer from the court’s seven justices.

At the center of the case is Walker Lake outside of Hawthorne in Mineral County.

Over more than a century, as upstream irrigators diverted water from the river, less and less water flowed from Walker River into the lake. Reductions in inflows led to changes in the lake’s chemical properties. Scientists observed sharp increases in salinity over past decades, leading to a loss of fish habitat. As the shoreline receded, fewer anglers came to the lake to recreate.

By the 1990s, Mineral County had had enough. It asked a court to require state regulators to “maintain the public trust in Walker Lake” by ensuring enough water reached the lake to support native fish. To do so, the county sought to apply the Public Trust Doctrine to Nevada water law.

On Tuesday, Mineral County lawyer Simeon Herskovits said that the Public Trust Doctrine is an “inherent component of every single water right in this state” and exists to protect Walker Lake. But, he added, the “protection has never been vindicated or acted on” by the state, despite its fiduciary duty under the legal doctrine. Instead, the state let Walker Lake’s shoreline recede.

On the other side of the equation are agricultural irrigators. To ensure that more water reaches Walker Lake, Nevada water regulators might require irrigators to forgo their existing state-issued water rights. By invoking the Public Trust Doctrine, irrigators worry they could see reduced water use. State agencies and the Walker River Irrigation District oppose its use in the Walker River.

They argue that public interest values were taken into consideration at the time that the water rights were issued. Solicitor General Heidi Parry Stern said that Mineral County seeks to use the doctrine as a “sledgehammer to undo [water rights] that have been made through Nevada law.”

Stern said the state, through statute, already considers the public interest in appropriating water for uses that include ranching, farming, mining, municipal development and wildlife protection.

The state and irrigation district said it was the Legislature’s role — not the court’s role — to determine what uses of water state regulators should prioritize and what is in the public interest.

“The Legislature decides what the public trust values are, and they are multiple and they are changing,” Stern said. “The Legislature is the appropriate place for the people to make heard their opinions on what the public trust values currently are. Those are then incorporated into all of the decisions by the state engineer.” (The state engineer is Nevada’s top water regulator).

Herskovits called that argument “misplaced.” He said it was the court’s role to rule on the legal doctrine, a fiduciary responsibility that is not fully fulfilled by Nevada statutes.

Although Walker Lake is central to the particular case, water users from across the state worry that a ruling from the court could have broader consequences.

Municipal water users, irrigation districts and trade groups for ranching, agriculture and mining all filed amicus briefs in the case. Many worry Mineral County’s interpretation of the doctrine could undermine the existing system.

In one brief, the Nevada Farm Bureau Federation, Nevada Cattlemen's Association, Lyon County Farm Bureau and Elko County Farm Bureau, said the county seeks “to have this court upend the [water rights] system and authorize the re-opening of already-settled water decrees. Such a request has implications that stretch beyond the facts and circumstances of this case.”

But Herskovits said that was not the intention.

States that have applied the Public Trust Doctrine to water rights have “shown no history — no record whatsoever — of those kinds of disruptions,” he noted. The Public Trust Doctrine, he said, “only calls for a type of balancing test.” He cast it as a tool for states to protect natural resources but not one that always requires the reshuffling of long-standing rights.

Both Herskovits and the environmental nonprofits pointed to a landmark California Supreme Court case, National Audubon Society v. Superior Court. That case, with similar facts to those in the Walker River case, allowed state regulators to revisit a water right held by the Los Angeles Department of Water and Power because it conflicted with California’s responsibility to protect Mono Lake.

“There have been none of the types of aggressive interferences or wholesale changing of entities or individuals’ ability to use” their water rights in California, Herskovits said.

The solicitor general and the Walker River Irrigation District urged the court to use Nevada law as its guide in answering the “public trust” question, rather than looking to California and Hawaii, the two Western states that have invoked the doctrine to change an existing water right.

Gordon DePaoli, a lawyer for the irrigation district, noted that other Western states with similar laws to Nevada have said “the public trust doctrine does not apply to the appropriation of water.”

The Legislature, DePaoli said, is best suited to answer the “public trust” question.

“These are very difficult policy decisions,” he said. “They have to be made by the people that the Nevadans have elected to make those tough decisions, and that’s their Legislature.”

As the court considers the issues, there is currently a program in place to boost the elevation of Walker Lake. For years, the Walker Basin Conservancy has used federal funding to purchase water rights from farmers and ranchers within the Walker River Basin. Their goal is to retire the water from agricultural irrigation, allowing it to remain in the river and flow freely into the lake.

Throughout the hearing, lawyers cited the program as an example of how current law provides a remedy for environmental restoration at Walker Lake.

Herskovits said that was a “red herring.” The program, he noted, would not alone restore enough flows to make Walker Lake sustainable.

“The fact is that that remedy is not going to be complete,” he said.