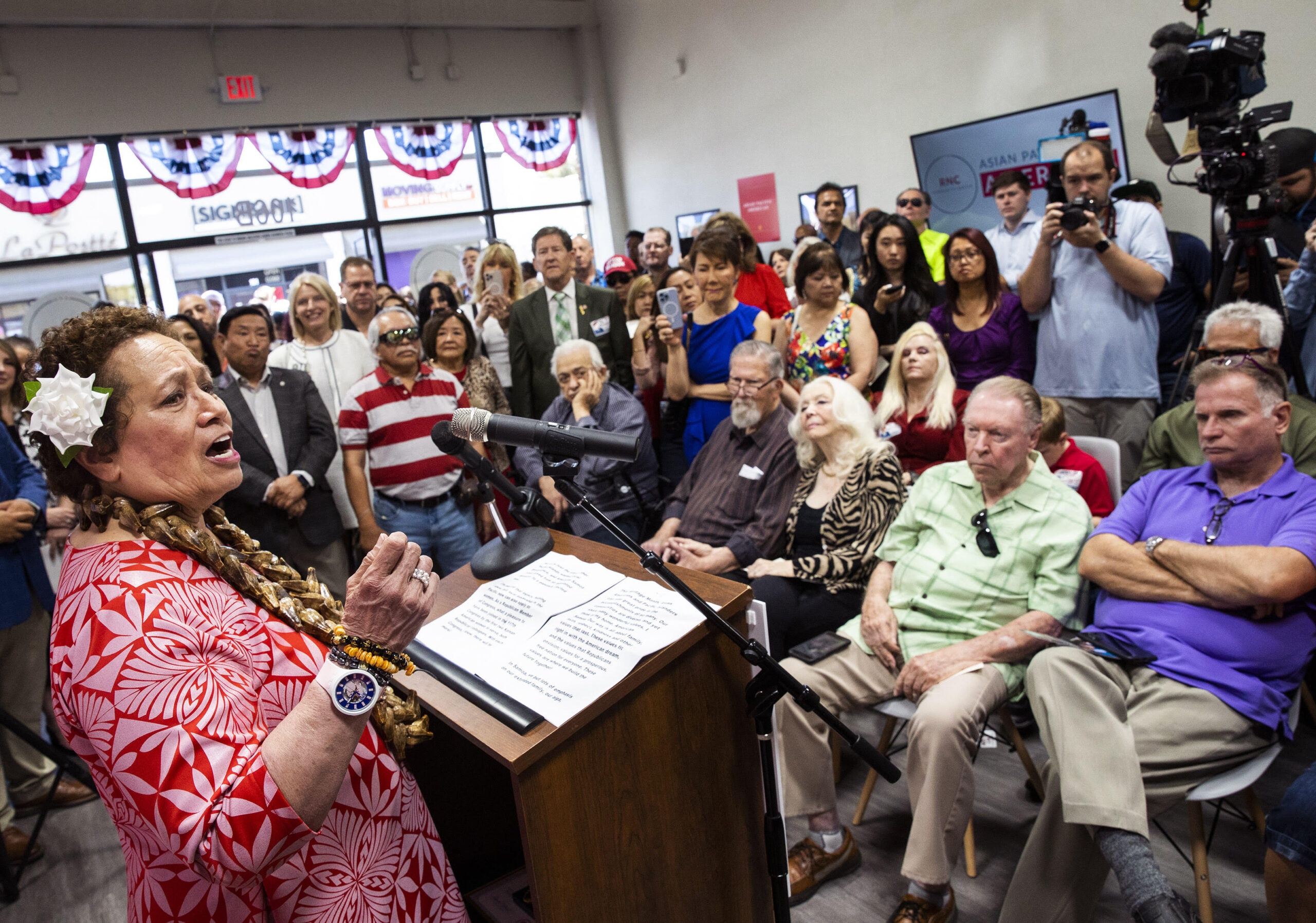 The Republican National Committee opened an Asian Pacific American Community Center on Wednesday in Las Vegas that it envisions as a resource to reach voters and a hub for members to bring up community concerns.

Located in a plaza within Las Vegas’ Chinatown, it’s one of 25 new centers the RNC has opened across the country in recent months. Community members lined up outside the center Wednesday as Committee Chairwoman Ronna McDaniel and Nevada GOP Chairman Michael McDonald spoke during the opening ceremony, which coincided with Asian American Heritage Month.

In both Nevada and the United States, Asian American Pacific Islanders are the fastest-growing demographic group. The rising AAPI population has translated to increasingly influential political power — representing 11 percent of the electorate. Exit polling from 2020 indicated that 58 percent of Asian American voters in Nevada supported Biden and 40 percent chose Trump.

“This is a long-term commitment the RNC is making to communities to show that we are a party that represents every American,” McDaniel said. “And we also recognize the Democrat Party has taken the Asian American vote for granted for far too long, and it’s time for Republicans to show up.”

The opening event included a video from U.S. Rep. Young Kim (R-CA), one of the first Korean  American women to serve in Congress, who said Republicans are trying to reach new Asian American voters across the country. She said the community center will be the key to the GOP’s aim to take back the U.S. House, the U.S. Senate and Nevada’s governorship in November.

Many in the audience cheered as Kim said, “I’m so excited to see all these investments by the RNC spreading our common-sense conservative values to new communities and taking our country back from Joe Biden and the Democrats’ radical agenda.”

U.S. Rep. Amata Coleman Radewagen, the first woman from American Samoa to serve in the U.S. House of Representatives, attended in person and said her cultural values, including family and faith, align with the American Dream and the values that the Republican Party holds. She added that the community center will enhance and develop Asian American families’ lives and opportunities.

Pauline Ng Lee, who is Chinese American and the former president of the Nevada Republican Club, agreed with Radewagen that the AAPI community’s emphasis on faith, family, personal reliance and independence closely mirrors Republican values. She said it was a “dream come true” for the center to finally open as she has been a big proponent since its inception.

As one of the last speakers at the event, McDaniel highlighted some of the prominent issues facing the Asian American community — including an increase in hate crimes and living costs and a lack of parents’ say in education.

She said since President Biden took office, hate crimes against Asian Americans have increased 339 percent. Hate crimes against Asian Americans drastically increased throughout the pandemic, with the organization Stop AAPI Hate reporting 6,603 incidents from March 2020 to March 2021. Democrats, however, have cast blame on former President Donald Trump for the increase in anti-Asian sentiment in the country, noting that he used racist terms to describe the coronavirus pandemic.

One of the attendees, Cyndi Crowe, a Filipino American and a lifelong Republican, emphatically nodded along to McDaniel’s speech. She said food shelves are bare and gas prices have become too expensive since Biden took office.

Regarding education, McDaniel said Republicans believe parents should have authority over what is being taught in children’s classrooms. She said students are being left behind because their leaders have failed them.

“We have seen Asian Americans get involved in school board races … because they understand that what the Democrats are doing with our education, our children’s future is not okay,” McDaniel said. “Our kids are now collateral damage to Democrat politics, and Asian Americans are not going to stand up for that.”

McDaniel laid out the RNC’s plan to defeat Gov. Steve Sisolak and U.S. Sen. Catherine Cortez Masto and win five seats to take back the U.S. House of Representatives. She said she feels good about where the party is at given the growth it’s seeing in the number of Hispanic and AAPI voters.

Following the center opening, the Nevada Democratic Victory issued a statement reacting to the  RNC’s efforts to reach AAPI voters.

“Every Nevada Republican on the ballot has embraced Donald Trump, who consistently attacks our AAPI community and demonized us during the pandemic,” said Kevin Wong, director of AAPI outreach for Nevada Democratic Victory. “In stark contrast, Sen. Cortez Masto and Governor Sisolak have fought to make a difference for us, rescuing our economy, supporting AAPI small businesses and helping keep our families safe.”

Last year, the RNC opened three AAPI centers in Atlanta, Dallas and California’s Orange County. McDaniel confirmed more will be opening across the country before the mid-terms in November to foster relationships with minority communities.

The article has been updated to include a statement from Kevin Wong, director of AAPI outreach for Nevada Democratic Victory.