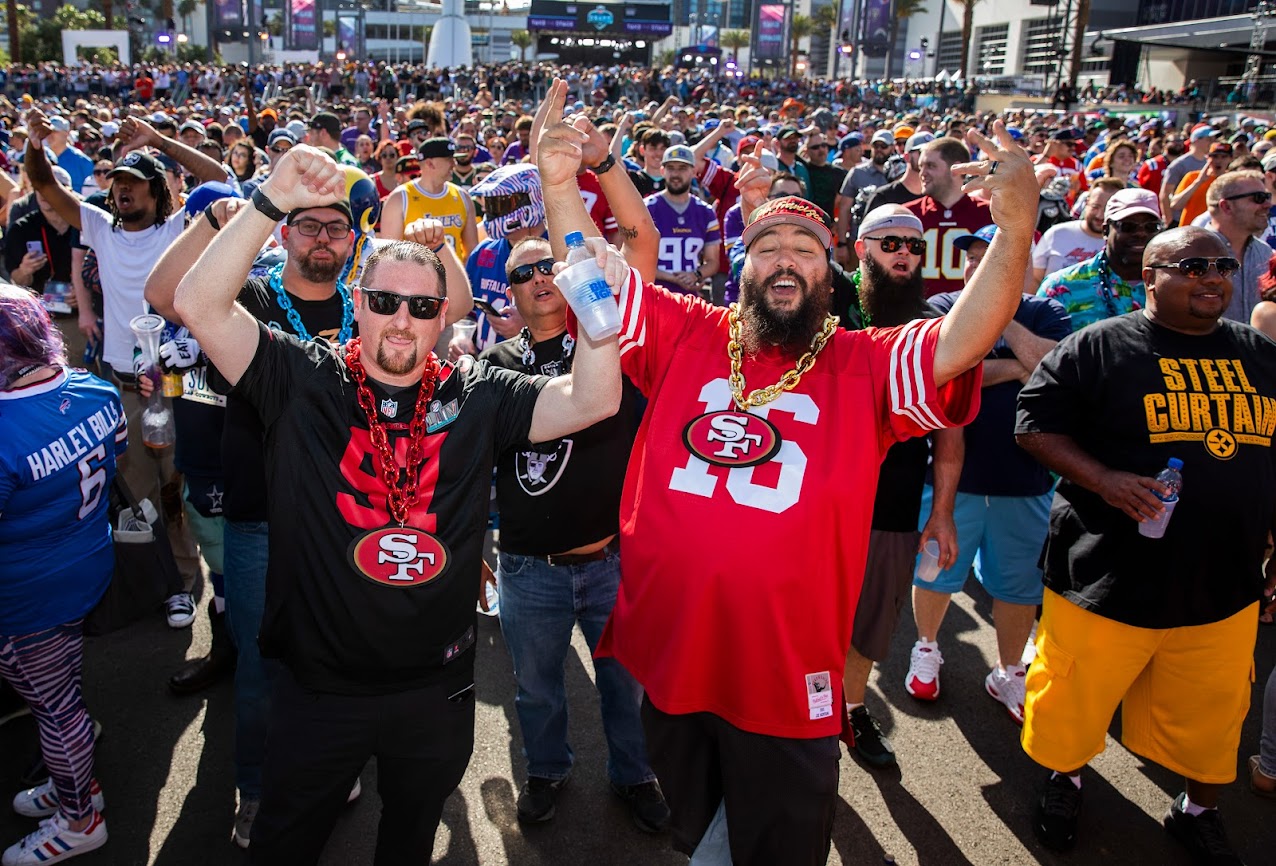 The five fans stood in the plaza area outside the Caesars Forum Conference Center, hundreds of yards away from the stage and theater where the draft was taking place.

Darrell Kaltz said the group arrived a few days ahead of the draft and decided to relax at the Bellagio pool rather than heading directly over to the stage.  Even with the late arrival, the draft-goers still felt like they were in the center of the action.

Surrounded by thousands of decked-out football fans, Kaltz and the Lions fans watched the first round of the draft unfold on large-screen television monitors throughout the plaza area. The more than 1 million square feet just east of the Strip had been proclaimed by NFL executives and Las Vegas tourism leaders as the temporary center of the professional football universe.

The event, which attracted several hundred thousand visitors and football fans from around the country, is a high-profile example of the kind of in-person events still returning in earnest after several years of COVID-related shutdowns and capacity limitations.

The NFL Draft capped a calendar of major sports events that arrived in Las Vegas this year, starting with the NFL Pro Bowl at Allegiant Stadium and NHL All-Star Game at T-Mobile Arena during the first weekend in February, several college basketball tournaments at T-Mobile, MGM Grand Garden and Orleans Arena in early March, and a three-race NASCAR weekend at the Las Vegas Motor Speedway on the first weekend of March.

Part of the exuberance surrounding the Las Vegas event was its designation as the league’s first large-scale draft since 2019 in Nashville. The 2020 event in Las Vegas was canceled because of the pandemic, with the draft held virtually. Then, health and safety restrictions scaled back last year’s draft in Cleveland.

The 2022 draft event space was bordered by the Linq Promenade, High Roller Observation Wheel and Caesars Forum. But crowds spilled onto the Strip, especially the neighboring Linq.

“This is the first time we ever had an event that is close to us,” Chafetz said of the draft and fan experience taking place just behind the Linq. “What I’m hearing from our team is the numbers are very similar to March Madness.”

She said business at the Linq is driven by the free independent traveler who is “here to let their hair down and have fun” and the NFL Draft provided “the perfect audience for the Linq.”

Flavio Corando, manager of Flour and Barley Pizza, also compared the energy from the NFL Draft to March Madness.

“It’s exciting to have these types of crowds … in the restaurant,” he said.

For Mike, Nick and Jim Paolini, visiting from Buffalo, New York, the trip to Las Vegas marked their 21st attendance at an NFL Draft. Years ago, Mike Paolini was living in London and made his way back to the United States, so he wouldn’t miss an NFL Draft.

The Paolinis all had ticketed seats inside the Draft Theater in the Bills fan section, courtesy of their designation as “Day Two Diehards” – fans willing to sit through all seven rounds of player selections.

Kaltz’s group — joined by friends and relatives — has also attended the NFL Draft in other cities. But they enjoy the atmosphere of the draft in Las Vegas and said they looked forward to seeing who the Lions would draft. Having the event in Las Vegas meant they could pace themselves.

The Detroit contingent was outfitted in Detroit Lions T-shirts and caps. The Paolini family had a similar look, covering themselves in Buffalo Bills gear.

But the outfits were far more conservative compared to others.

Many of the fans attending the Draft Experience could have been mistaken for characters on the Las Vegas Strip who pose for photos with tourists, or the buskers on Fremont Street.

Take, for example, Charles Sandoval of Southern California, who looked like a professional wrestler in a Los Angeles Chargers jersey. The former U.S. Marine, with blue and gold face paint and a bright blue mohawk, greeted fellow fans of the team as “Chargers Warrior.”

Nearby, Christian Contreras, dressed in a custom-made purple and gold “Star Wars” Mandalorian helmet and wrist sleeves adorned with the word “skol,” greeted fellow fans of the Minnesota Vikings as the leader of the “Vikings World Order.”

He said more than 20 members of the group were at the draft, and he was seeking to attract new recruits, or members, to the fan group.

Meanwhile, standing near the theater, John Kress could have been mistaken for a new kind of lion king. The Las Vegas resident — by way of Iowa — greeted fellow Detroit Lions fans wearing a light blue cape and crown, Lions-themed pants and a large blue and silver belt with the team’s logo.

Tampa Bay Buccaneers superfans Annette and Mike Dearing planned outfits for each of the draft’s three days. Annette kicked off the first day with a pirate-themed outfit, while Mike sported a large orange afro-style wig, shirtless except for a Buccaneer-red jacket, complete with a large belt featuring the Jolly Roger logo.

“I’ve rescheduled surgeries so they didn’t conflict with game days,” he said of loyalty to the team. Annette said she has told family members not to schedule big events, “such as weddings,” on game days.

Taking in the spectacle was Henderson resident Jesse Pires, wearing a New England Patriots jersey with Tom Brady’s name and number. He brought along his daughter, Tammy, who wore a Los Angeles Chargers jersey.

“We just wanted to come down and see what the experience was about,” Pires said. “I've been an NFL fan my whole life and never had the opportunity to get to the draft. So I figured if you could go in your hometown, you should go.”

A similar attitude was expressed by brothers Pete and Joey Olson from Bozeman, Montana.

Pete Olson, wearing a Washington Commanders T-shirt, said the brothers were planning to come to the draft in Las Vegas in 2020 before COVID-19 halted the event.

“We’re up in Montana. We don’t get this type of entertainment,” Pete Olson said. “We figured we had to come down and be a part of it.”

The Olson brothers camped out by the ESPN stage in the back of the Plaza, where commentators analyzed the draft and NFL insider Chris Mortensen reported trade rumors.

Joey Olson, wearing a Los Angeles Rams jersey, said one of the fun parts of the draft was seeing all the different jerseys and team gear worn by fans.

“This is one of those fun experiences we’ve always talked about,” Joey Olson said. “It’s fun to see the diversity and passion people have for their teams.”

The long-term NFL Draft attendees all spoke of the 2019 event in Nashville and how it compared to Las Vegas.

Nashville reportedly had more than 600,000 attendees over the draft’s three days, and the festivities included closing off Broadway Street, where many of the city’s honky-tonk bars and music venues are located.

“Nashville was the best draft yet,” Tampa superfan Mike Dearing said on Thursday. “We’ll see if Las Vegas can compete.”

The 2023 draft will be held in Kansas City, Missouri, and the 2024 draft was recently announced for Detroit.