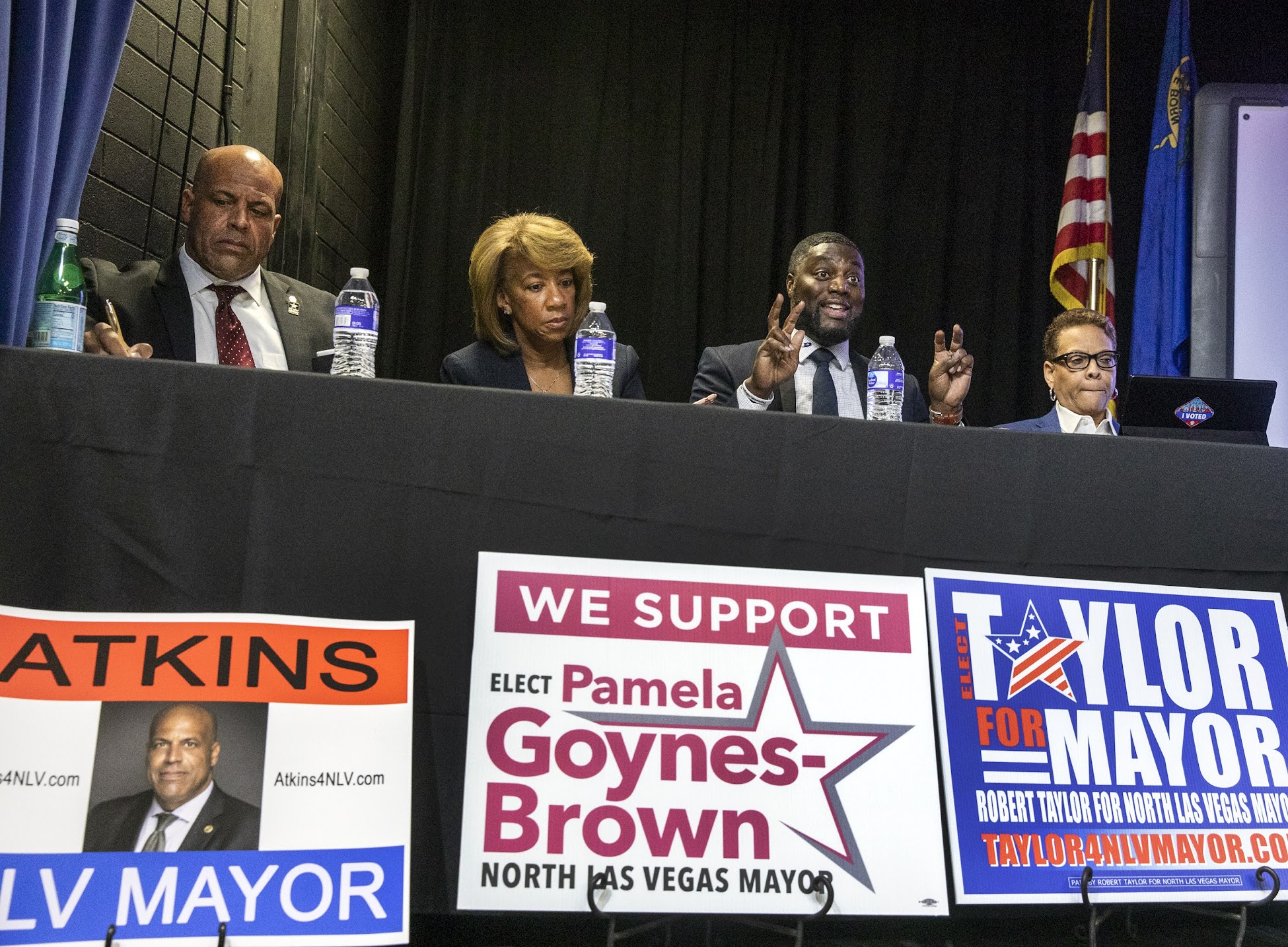 The event, organized by the Nevada Democratic Veterans & Military Families group and moderated by Nevada Independent Editor Elizabeth Thompson, comes on the heels of a similar event hosted by the Clark County Black Caucus. Six candidates are competing to be mayor of the city of 262,000 people — a job that is open as incumbent John Lee runs for governor as a Republican.

After the closure of two North Las Vegas casinos, which had a dramatic effect on employment and the local economy, candidates were asked how they will diversify job opportunities in the city. They said that once elected, they will bring in jobs from multiple industries, including various tech sectors, energy, assisted living developments, medical jobs and a new inland port for cargo.

“Utah has an inland port,” said grassroots campaigner Robert "Twixx" Taylor. “All we need for an inland port is the railroad. We have a railroad and we have land.”

He said local grocery store shelves are more susceptible to being empty in North Las Vegas because there is a need for a port for cargo trains and truckers.

All of the candidates agreed there was a need for more police officers on the streets, but Fortune 100 business leader, Nathan Atkins, added that he would like to see technology used in place of speed traps. They all agreed North Las Vegas was not ready for its own school district and that the city council needed to be expanded beyond four members, not including the mayor.

Disagreements arose about the conditions of Windsor Park and its underlying issues.

“Right now, Windsor Park will not see any legislative action and I know that for a fact because I was told that … simply put [because] it’s an election year,” said Pamela Goynes-Brown, a councilwoman and mayoral candidate.

Goynes-Brown said voters wanted to know why American Rescue Plan dollars have not been directed at the community. Pointing toward Nevada’s federal delegates or local state leaders for solutions, Goynes-Brown said she has had several conversations with lawmakers over the course of five to six years to do something about Windsor Park.

However, state Sen. Pat Spearman put the blame on the City of North Las Vegas, stating that the area has been neglected and not respected by city officials.

“There are several people in the Legislature, in both houses, the Senate and the Assembly, who are quite concerned that there is a historic Black community that has been neglected so long and [residents] have been told that they can’t fix up their houses,” Spearman said.

The forum ended with a discussion about the “raw deal” facing veterans. Atkins and Spearman — both of whom are veterans — spoke about approaching veterans with more inclusiveness, noting that they are not all men nor all broken. Jesse Addison III, a veteran and police officer running for mayor, said that outreach and communication between agencies are the biggest shortcomings.

Goynes-Brown followed up by announcing city leaders broke ground on a new veteran resource center last Tuesday near Sky View YMCA and that it will be open to all veterans across the state.