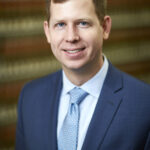 Benjamin Edwards
March 30th, 2021 - 2:00am
A legislative employee places a mat outside the building on the first day of the 81st session of the Legislature in Carson City on Monday, Feb. 1, 2021. (David Calvert/The Nevada Independent)
Over-eager economic development legislation may backfire

The Legislature risks undercutting economic development by needlessly taking on an issue that the state’s securities regulator already has in hand. Substantively, Senate Bill 9 aims to foster economic development by making it easier for some relatively small private funds to raise money and invest in Nevada-based businesses. This seems good! Developing a diversified economy will benefit all Nevadans. But the Legislature should not pass SB9.

Although federal and state securities laws can be complicated, this legislation does something simple. SB9 creates an exemption from certain state licensing requirements that would otherwise apply. It would make it easier for funds to raise money and then turn around and invest that cash in Nevada. As far as I can tell from reviewing the legislative record, nobody objects to having this exemption become a part of Nevada law.

Still, SB9 either should be tabled or substantially amended because Nevada’s securities regulator has already included the same exemption in proposed regulations. The secretary of state’s office has even filed the draft regulations with the Legislature and pointed out that the “large majority [of states] have provided this exemption by way of regulation.”

The exemption will become available as soon as the new regulations go into effect, and the Legislature should spend its limited time doing more productive things. For example, AB184 would do real good by creating an office of Small Business Advocacy, something the state’s existing regulators cannot do simply by amending regulations.

Continuing to push SB9 risks doing damage to Nevada’s economic environment and may, in addition to wasting time this session, require the Legislature to waste even more time in the future. The only real question is whether to situate the exemption within Nevada’s statutes or put the exemption within the regulatory code. Enacting SB9 would calcify the exemption in statutory language and require a future Legislature to address any later-discovered flaws with it or modify it to conform to changing circumstances. In contrast, allowing state regulators to stick the exemption into the administrative code avoids these problems. Indeed, most states that provide for such an exemption do so through regulations and not through statute.

Where the exemption appears matters. Putting the exemption into statute instead of the regulatory code will create problems. Nevada’s Legislature does not meet on an annual basis, and will not be well-positioned to respond to changing circumstances. Moreover, the legislation references federal regulations which may be changed by the federal Securities and Exchange Commission. Will the content and meaning of Nevada’s statutes change if federal securities regulations change (as they often do) or become recodified with slightly different language or different citations? These are complicated questions which could be entirely avoided by allowing state regulators to update their exemptions to conform to the constantly-changing federal securities laws.

Consider the problems a statutory change could create for the people who want to use this exemption a few years from now. What will they need to do when changes in federal regulations inevitably make Nevada’s statute fall out of sync with the federal regulations? The funds seeking to use this exemption will need to spend more money on expensive securities lawyers to figure this issue out. On the one hand, this is great for me because it will increase the demand for my securities regulation course. On the other hand, we should not create needless complexity, making it necessary to spend even more money on lawyers to understand the law.

The Legislature should already know about this problem, but it’s difficult to get its attention. I explained this issue in a letter provided to the Legislature in advance of SB9’s first hearing. Despite that, SB9 has continued to chug its way through the legislative process. On March 18, the Senate Finance Committee passed the bill out of committee after about five minutes of discussion — and without ever discussing whether there was any need for the legislation because the exemption will soon appear in the regulatory code. On March 23, the Senate unanimously voted in favor of it.

As far as I can tell, none of the legislation’s well-meaning proponents are securities lawyers and thus familiar with the problems this statutory approach will create. I’m not a lobbyist and I’ll happily take part of the blame for the legislation getting so far and wasting so much time. I did not call in to the Finance Committee’s work session to point out the problem because I was on my honeymoon. But I’m back now, and hoping the Assembly will read The Nevada Independent.

If the Legislature really wants to support economic development and keep our securities regulations up to date, there is a much better way to do it. For example, the legislation might be amended to express support for putting the exemption into the administrative code and direct the Nevada Securities Division to periodically consider how to update it. Or the Legislature might direct the Securities Division to solicit public comments and review existing exemptions every three years and determine whether to push through a round of updates. This approach would avoid problems and help support Nevada’s business environment.

Benjamin P. Edwards is an Associate Professor of Law and the University of Nevada, Las Vegas, William S. Boyd School of Law. He researches and writes about securities law.