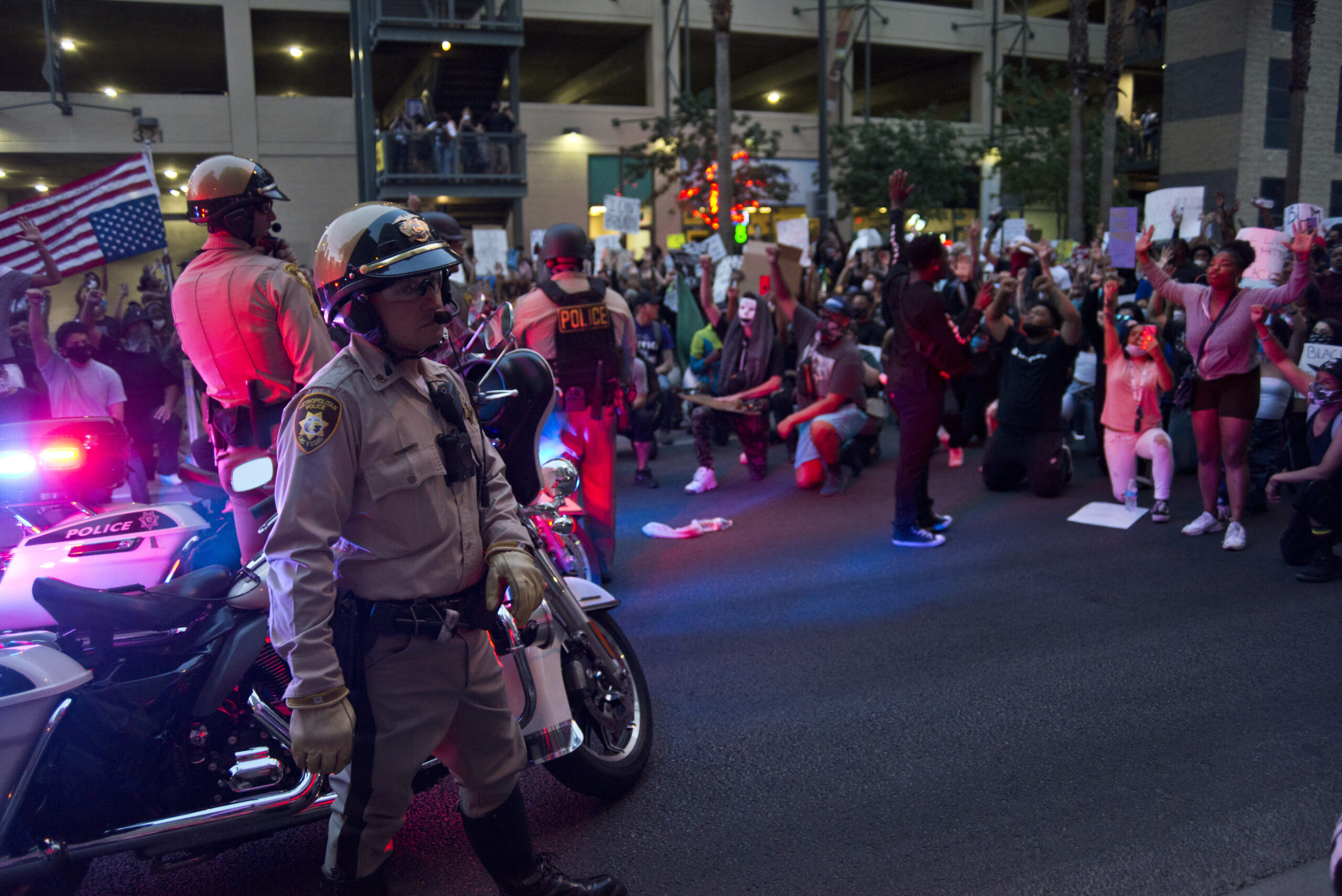 On June 3, Gov. Steve Sisolak tweeted his support for volunteer lawyers serving as “legal observers” for Black Lives Matter protests. He specifically praised John Piro, a high-ranking member of the Clark County public defender’s office and a familiar presence as a lobbyist in Carson City’s halls of power.

But on Saturday, Piro found himself in the same place as many of his indigent clients — hands behind his back and facing down a court date. Piro is charged with “pedestrian intentionally in a roadway” stemming from an arrest that happened at a Saturday protest in Las Vegas while he was wearing a red shirt emblazoned with the words “legal observer.”

“It's a very degrading feeling,” Piro said in an interview on Tuesday with the IndyMatters podcast. “Makes you feel like you're not a citizen in a democracy but more in a police state.”

Legal observers, many trained through the National Lawyers Guild, are meant to serve as neutral monitors at demonstrations to keep an eye out for unconstitutional conduct from the government. Sisolak issued a statement over the weekend saying that he wanted an investigation into their arrests.

But in a press conference on Tuesday, Clark County Sheriff Joe Lombardo asserted that some of the observers were not remaining neutral, instead “antagonizing and obstructing our officers” and becoming active participants in the rally while police were trying to get demonstrators out of the road to maintain public safety.

Lombardo played a series of video clips on Tuesday, including one of Piro’s arrest and another showing observers approaching police, with members of the crowd following close behind. The sheriff said some observers were “seemingly leading the crowd of aggressive protesters” and that one “shoved her cell phone camera up to an officer’s face in a confrontational manner.”

“As I respond to the criticism of the tactics that LVMPD utilized, I’m concerned about the dangerous rhetoric that has been displayed online. Clearly this is a lot of emotion, often intermixed without facts, that continues to amplify tensions in our community,” Lombardo said. “It only emboldens agitators and extremists.”

As Piro tells it, he and colleague Belinda Harris were boxed in by police lines in front and in back and were waiting to get more information on a fellow legal observer who had been arrested. They first spoke with a lieutenant who assured them they could get information if they waited.

“So we were sitting there on the corner of the sidewalk of Russell and Las Vegas Boulevard, waiting for our chance to be able to speak with officers to get information of the first legal observer that was detained, when all of a sudden multiple uniformed officers walked in in our direction and snatched us off the sidewalk without warning,” Piro said.

Video shows the two, restrained with zip ties, being walked across Las Vegas Boulevard to a center median before officers searched their pockets.

“I’m actually glad that they shared that video because it depicts exactly what we said happened,” Piro said.

While some observers were taken to the Clark County Detention Center, including one woman who Piro said described to him “deplorable” conditions within the jail, he and others were simply cited and released.

He pushed back on Lombardo’s characterization of the legal observers’ conduct, saying that the volunteers were not getting involved but rather trying to get photos and other information about arresting officers.

“This use of the word ‘antagonizing,’ I believe, is purposeful. It's the same type of language that Bull Connor used to describe Dr. Martin Luther King,” he said, referring to the Alabama Public Safety Commissioner who ordered fire hoses and police dogs be used on civil rights protesters in the 1960s. “‘Antagonizing’ is a way to dehumanize people with which you disagree, to try to make your unjust actions seem just. And that's what I believe the sheriff was doing. And it's really disheartening.”

Lombardo said police had to balance people’s First Amendment rights with protecting lives and property. He added that he’s confident in Metro’s ability to investigate its own officers’ conduct toward protesters and argued that the agency has no record of concealing information or purposely skewing an investigation toward an officer.

Piro and other lawyers and legal observers who were at the protests, however, are scheduled to appear at a news conference in Las Vegas on Thursday morning to “call for de-escalation” after the incidents. Piro said the arrest has affected him more than he thought it would.

“It really messes with you, the feelings of helplessness, the feelings of powerlessness, such that maybe you feel your only option is to protest in the streets so that people can see how you feel,” he said. “If this could happen to me, imagine how it's happening to people without my resources, not in the public eye. And how we so easily excuse it.”