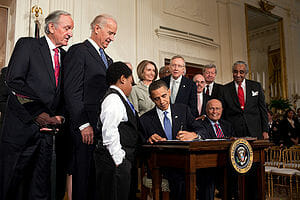 Nevadans are overwhelmingly opposed to a total repeal of Obamacare and half of voters would oust a senator or congressman who voted to do so, according to a new poll paid for by a group trying to preserve the Affordable Care Act (ACA).

The survey also is the the third consecutive public poll to show Sen. Dean Heller may be in trouble in his re-election bid, albeit 600 days before voters will cast ballots. A TV campaign paid for by the same organization and going after Heller, who has sent mixed messages on the House bill, is expected on the Nevada airwaves soon.

The poll, conducted a few days ago by Democratic robo-poller Public Policy Polling, was taken for Save My Care, a liberal group that has been actively supporting the ACA. The pollster surveyed 823 Nevada voters from March 10-12, producing a margin of error of 3.4 percent. (PPP is rated a B-plus by the 538 website.)

Although some people will question the survey’s funder and pollster, the sample looks reasonable. It has a 7-point Democratic edge, which is a point high when compared to actual registrations, and is 13 percent Hispanic, which is a few points low. The survey was done 80 percent by phone and 20 percent by the web, so caveat emptor -- but again, the sample looks pretty good.

----Fifty-three percent said the ACA is either working well or needs minor fixes while only 27 percent said it should be repealed and 17 percent said it needs major repairs. When given a binary choice to fix or repeal, it was 2-to-1 against scrapping the law.

----Fifty-nine percent said they were less likely to support a senator or congressman who voted to repeal ACA.

----At the end of the survey, 53 percent of voters said they would favor a Democratic candidate over Heller while only 36 percent said they would support the senior senator. But, to be fair, that question came after another one asking this:

Some might say that question unfairly leads people to believe Heller already has voted for it. (In reply to that question, 65 percent said they would be less likely to support him.)

“The polling makes clear that the GOP leadership’s health care agenda has been rejected by Nevada voters, and those who support it will pay a political price,” a Save My Care memo asserts. “We know the bill will lead to fewer covered, less protection and higher costs for Nevada families.”

Despite that breathless take and the tendentious goal here, I’d be worried if I were Heller.