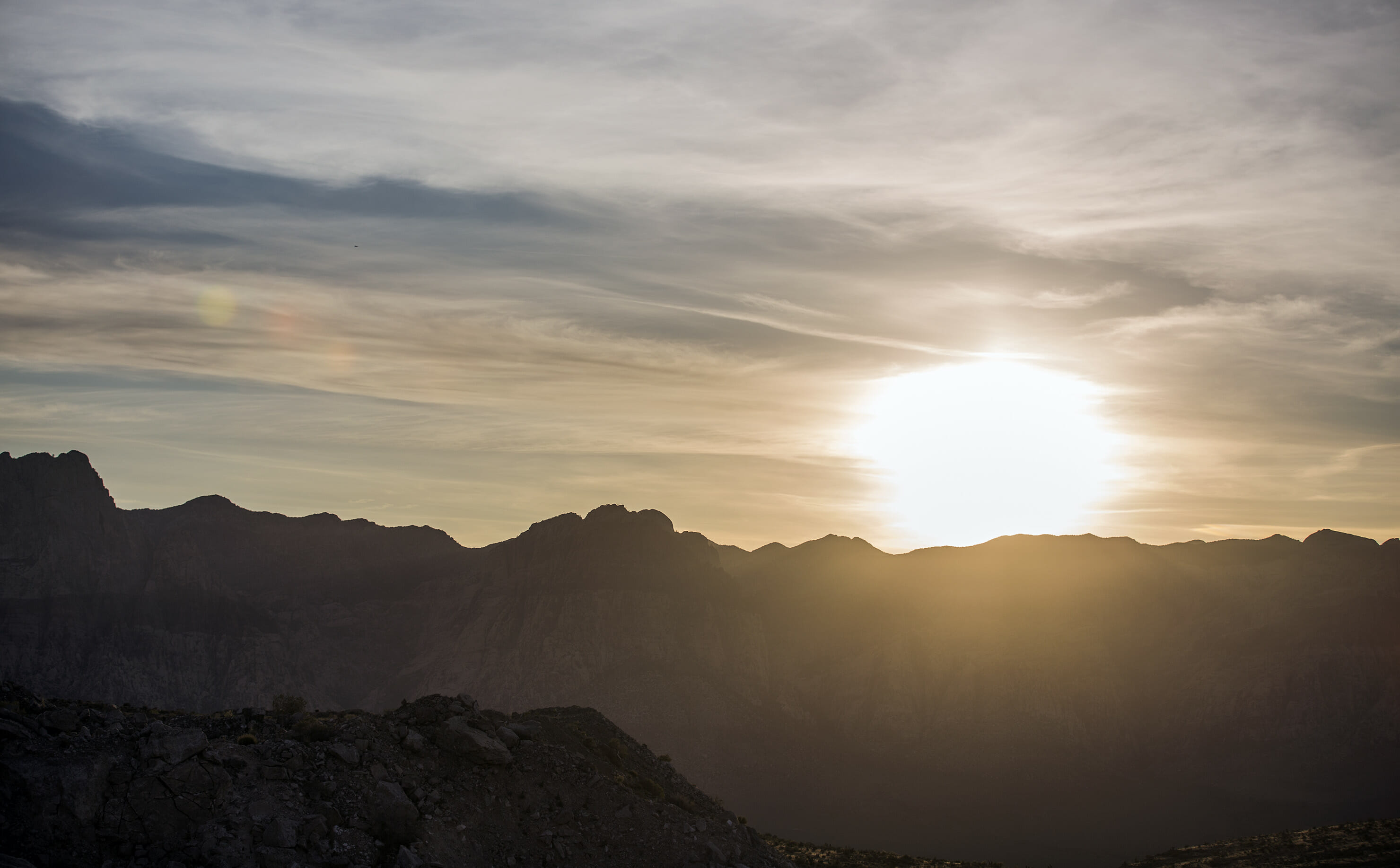 As stucco homes, strip malls and casinos multiplied in the desert during Las Vegas’ boom era, the build-build-build mentality seemed to trump thoughtful planning. After all, why not capitalize on the city’s rampant growth spurt?

But then a proposal to build a development within eyesight of residents’ beloved Red Rock Canyon National Conservation Area surfaced. Suddenly, the tune changed.

It kicked off a battle, now spanning more than a decade, that has involved the developer, county elected officials, conservation activists, community members and even some celebrity star power. The land in question: Blue Diamond Hill, home to one of the oldest gypsum mines in the country.

Developer Jim Rhodes, a trust manager with Gypsum Resources, wants to build 5,025 homes on about 2,000 acres at the site, which is a higher density than currently allowed by zoning regulations. Last Wednesday, the Clark County Commission voted 5-2 to allow Gypsum Resources to withdraw without prejudice a 2016 concept plan, an initial step in the process for applications seeking a higher-density land use designation.

The commission vote followed more than seven hours of public testimony and a declaration by the county attorney that Gypsum Resource’s previous concept plan, filed in 2011, remains valid.

If you’re scratching your head, you’re not alone. The move created more public confusion than clarity. Commissioners who voted for the action say they didn’t green light any higher-density proposal given multiple steps in the process that still need to occur. Meanwhile, people affiliated with Save Red Rock, a nonprofit that’s been fighting against the project, argue the commission blew its opportunity to reject intrusive development near a sacred recreation area visited by 2 million people each year. And, in true Nevada form, others have accused commissioners of letting politics creep into their vote, especially because the developer was represented by a politically connected lobbyist.

“It’s unfortunate that they’re not taking the time to understand what happened,” he said. “All seven commissioners want to preserve Red Rock.”

The big question at the forefront now, though, can be boiled down to three words: What happens next?

As the old saying goes, the past is crucial to understanding the present  — and that’s certainly true in this case.

The development saga can be traced back to 2002 when a company interested in buying the property proposed a master-planned community at the site, which drew ire from the public and didn’t go anywhere. Later that year, Gypsum Resources purchased the property, which still contains an active mine that would be phased out pending any residential development.

Shortly thereafter, Clark County and the state adopted ordinances and laws that prevented landowners from applying for a zoning change to increase density within the 46,000-acre Red Rock Overlay District. The apparent clamp-down on development prompted Gypsum Resources to file a lawsuit against both the state and Clark County, alleging the laws violated the company’s constitutional right to equal protection.

In 2009, Nevada’s U.S. District Court ruled in favor of Gypsum Resources in its case against the state. The state had to pay the company’s roughly $920,000 worth of attorney’s fees, county spokesman Dan Kulin said. Expecting a similar outcome, the county settled with Gypsum Resources in 2010 and agreed to an “exemption area” within the overlay district.

What that meant: Gypsum Resources could apply for a zoning change. And it did.

The rural zoning designation allows for one home per 2 acres, but the developer filed a concept plan in 2011 that would have increased that density to allow for roughly 7,500 homes on the 2,000-acre parcel, said Jay Brown, an attorney who represents Rhodes.

The county approved the concept plan but capped the number of homes at 5,025 and issued other conditions, including that the primary access road to the area be from State Route 160 and not State Route 159 — the feeder road to the conservation area.

The concept plan approval is only the first leg of a multi-step process. Gypsum Resources still needs approval of a more-detailed specific plan, public facilities needs assessment, a development agreement and zoning designation changes. All would require additional public hearings and commission votes.

The developer submitted a specific plan and public facilities needs assessment in September 2011, county officials said. But the project didn’t move forward for several years because Gypsum Resources entered into negotiations with the Bureau of Land Management to pursue a land swap.

“After over three years doing this, BLM came back and basically said, ‘Why do we want what you’ve got? Your property is not pristine,’” Brown said.

In an April 2014 letter to the developer, the BLM outlined its reasons for rejecting the land exchange, which included the existence of  “hazardous mining features such as adits, shafts, pits filled with water, and surface debris” on the property.

Fast forward to 2016. That’s when the developer approached the county again about moving forward with the project. County staff advised Gypsum Resources that it must file a another concept plan, so the company filed a new plan that was nearly identical to the first one but included the conditions required by the commissioners, Brown said.

The submittal of the 2016 concept plan tipped off a new round of public outcry, with Save Red Rock leading the effort to block higher-density approval.

“Obviously, we’d all love to have it be restored to its pristine beauty and be used for hiking trails, but it is private property,” said Justin Jones, an attorney and former state senator working with Save Red Rock, a grassroots organization dedicated to preserving the conservation area. “He’s entitled to build what he bought.”

As the public tug-of-war raged, the county sought clarity about several issues from a Clark County District Court judge before a commission vote on anything. And even that stirred controversy. The county calls the legal filing an “action for declaratory relief”; Save Red Rock calls it a lawsuit because the nonprofit was listed as a defendant along with Gypsum Resources.

The legal filing asked the judge for guidance on whether the 2011 concept plan expired — as Save Red Rock was arguing.

The judge didn’t grant summary judgment but essentially said the county should go forward with its planned public hearing about the 2016 concept plan. Dozens of people opposing a higher-density development spoke at the lengthy meeting, including a world-famous rock climber, economics professor, geologist and historian. Several hundred people attended.

But county attorney Robert Warhola argued the 2011 concept plan was still in effect.

That led to the commission voting 5-2 in favor of allowing Gypsum Resources to withdraw without prejudice the 2016 concept plan, Sisolak said. Commissioners Chris Giunchigliani and Lawrence Weekly cast the opposing votes.

“We did not vote to put one house, one street light, one road, one store on Blue Diamond Hill,” Sisolak said. “We did not allow him, by our vote, to put anything up there.”

Giunchigliani said the turn of events gave her “pause” and further reinforced her desire to vote no in hopes of ending the development debate. She also voted against the 2011 concept plan and doesn’t want to give the developers more than what they’re entitled to per zoning regulations.

“It gives me unease,” she said, referring to the last-minute discovery of the receipts. “It makes me question what’s valid and what isn’t valid.”

“They didn’t take the opportunity to do that,” he said. “Instead they pulled a bait and switch at the end of seven and a half hours of testimony and rather than simply deny Gypsum’s 2016 plan, they came up with this scheme to let the 2011 plan (stand),” he said.

Annette Magnus, executive director of Battle Born Progress, called the commission vote a “shady mess” that reeks of deal-making behind the scenes.

“It’s typical pay-to-play politics that happen in Nevada,” she said, likening it to the Nevada Legislature’s decision regarding the NFL stadium. “This is no different.”

Rhodes is a prolific Las Vegas developer who’s behind a number of projects, including Rhodes Ranch, Spanish Hills and Tuscany Village in Henderson. But, as Vegas Inc. reported in 2014, he’s had his fair share of legal woes and political scandals along the way.

Sisolak rejected the assertion of bought votes, calling it an argument that “rings hollow” because every elected official accepts donations from different industries.

“That’s just simply not the case,” he said. “Each individual applicant is evaluated on its merits. That’s what we did here.”

But she vowed to continue fighting against any higher-density development near the conservation area. Jones said Save Red Rock hasn’t given up either and plans to file a motion seeking injunctive relief within several months. The advocacy organization hopes the legal filing will prevent Gypsum Resources from being able to take further steps toward development, he said.

“If this proposal is authorized,” he said, “it’s just going to give the green light to others to develop in places they shouldn’t.”

If Rhodes does develop Blue Diamond Hill, it’s likely many years down the road.

First, Gypsum Resources must gain all the extra approvals necessary in the major-planning process. Sisolak said he doubts the commission would approve 5,025 homes for the property despite that number’s existence in the 2011 concept plan.

Plus, he questions whether Rhodes would ever be able to turn a profit given the massive infrastructure needs at the site, which sits, as the name suggests, on a steep hill overlooking the Las Vegas Valley. For water alone, the costs would be astronomical.

Bronson Mack, a spokesman for the Southern Nevada Water Authority, said the developer would need to pay for more than 6.5 miles of pipeline, three reservoirs and three pumping stations just to lift water 1,200-plus feet up to the property. Additional piping, reservoirs and pumping stations would be needed on the site to provide water for residents, he said.

The logistical feat would cost “tens of millions of dollars,” all of which must be paid by the developer, Mack said. “It’s a pretty significant elevation change,” he said.

Brown acknowledged the hefty price tag and said infrastructure could be “cost prohibitive” if the density isn’t enough to recoup those expenses. A higher-density development naturally means more people living there, creating a need for schools and grocery stores, which would mitigate traffic if the community is more self-contained, he said.

Brown said Rhodes is confident he can complete the project as it’s envisioned right now. The developer intends to work with residential builders from across the country to construct the 5,025 homes.

“If your vision is good, the money will come,” Brown said.

But Brown didn’t rule out the possibility of Rhodes trying to strike another deal with the BLM. When the federal agency denied the land swap in 2014, officials noted that Gypsum Resources could revise its proposal to include only “lands that are undisturbed and have high resource value.”

“Our position has not changed,” Kirsten Cannon, a BLM spokeswoman for the Southern Nevada District, wrote Tuesday in an email. “As stated in the 2014 letter, BLM requested a revised proposal for acquiring undisturbed land; such a proposal has not been received to date.”

Rhodes considers the property “something special” because of its location and view but might be willing to consider another option if there’s interest from the BLM, Brown said.

“He doesn’t need this aggravation and having this many people disappointed and upset,” he said.

In the meantime, the developer plans to forge ahead with public outreach to show stakeholders — the fire department, public works, concerned residents — that his vision is solid.