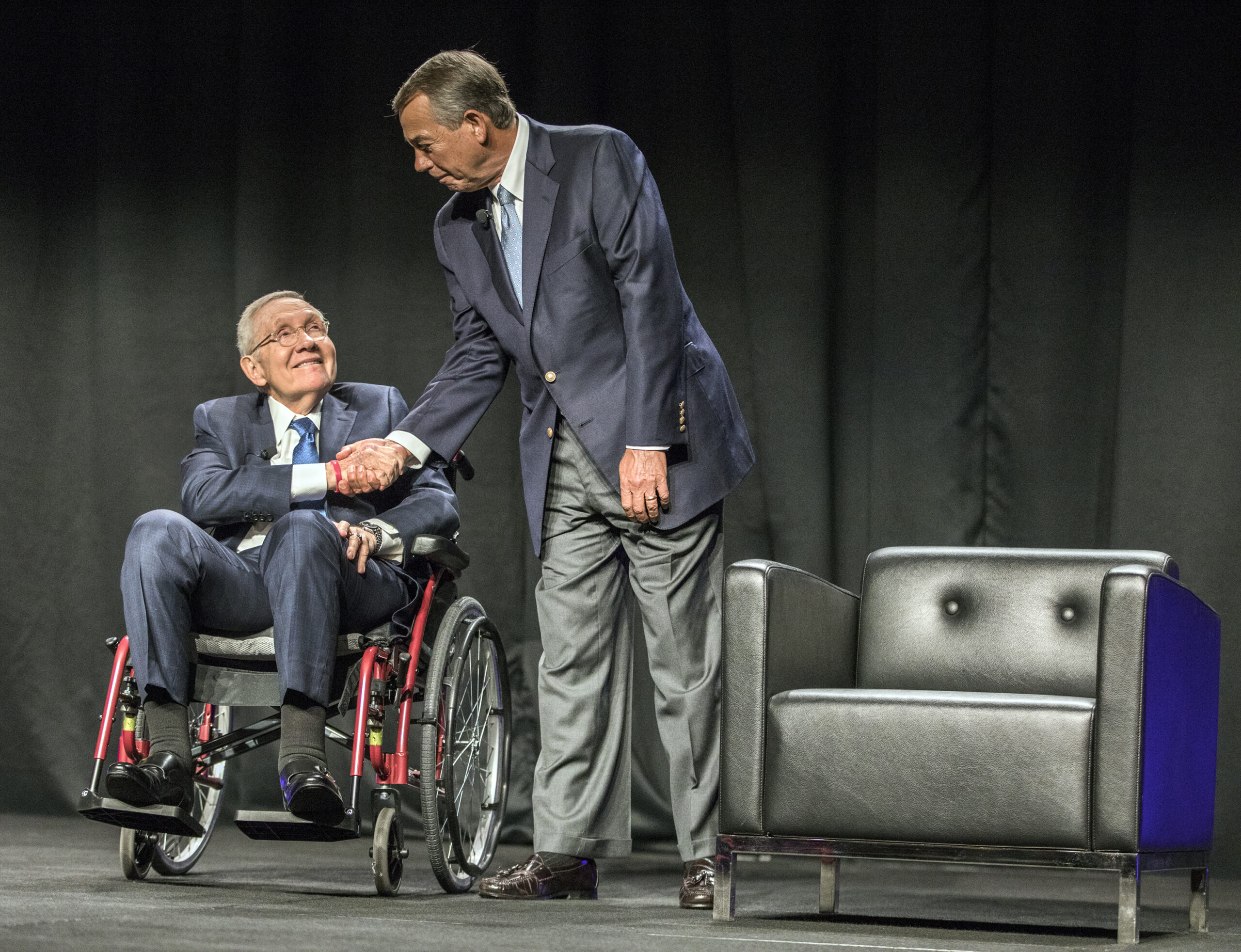 Former Sen. Harry Reid has advocated for a more measured approach to special counsel Robert S. Mueller III’s investigation rather than with any immediate call for impeachment proceedings against President Donald Trump.

The topic surfaced during a symposium sponsored by the MGM Resorts Public Policy Institute at UNLV, which was held Tuesday at the Bellagio. The event brought the longtime Nevada senator and former Speaker of the House John Boehner together for a panel discussion.

Reid called impeachment proceedings a “difficult decision” that shouldn’t be rushed. He also said the process would chew up an “enormous amount of time” and render it difficult for Congress to get anything else done.

Reid’s comments come days after the release of the Mueller report. On Friday, Massachusetts Sen. Elizabeth Warren called for Congress to begin impeachment proceedings, but House Speaker Nancy Pelosi has said there’s no plan to do so at the moment.

Reid — still considered a powerful and influential Democrat despite his retirement — also urged caution regarding the federal government’s deficit, which is expected to reach $1 trillion this year. Congress will be forced to address the growing issue, he said. Reid lobbed some of the blame on Trump’s tax cuts.

“We are driving ourselves into bankruptcy,” he said. “We have got to do something.”

Reid told reporters he considers infrastructure improvements — new or upgraded highways, bridges, water systems and dams — an issue that Congress should finally tackle. He said there’s “tremendous need” all over the country, and it’s something that would benefit communities and provide jobs.

The conversation featuring the two former elected officials, however, didn’t wade too much into partisan politics. It largely centered around the topic of the day — investing in a changing American work landscape.

Reid said the Iraq War, which he voted for but later publicly said he regretted, prevented the expansion of access to community college because attention and resources were shifted that direction. But Boehner, a Republican, said the slower-than-anticipated expansion was more a matter of reprioritizing. The former House speaker said the nation realized other education issues, such as access to pre-kindergarten and improving elementary schools, needed to take precedence.

“It kind of got stopped in its tracks because we weren’t ready for it,” Boehner said.

Boehner also said providing children a good education shouldn’t fall solely on schools. Instead, he said it’s a collective responsibility that should involve the child’s home and community as well.

“It’s going to take all three of those components,” he said.

Reid, meanwhile, said lawmakers should involve more teachers in the legislative process as a means toward improving education systems.

As for dysfunction in Washington, both men struck an optimistic view of elected officials’ ability to legislate despite partisan divides.

“I do not accept the fact that things are too much in turmoil that we can’t get things done,” Reid said.

Boehner acknowledged that he received criticism for working with Reid or former President Barack Obama to reach compromises, but he couched those efforts not as a weakness but rather a strength in leadership.

“Leaders get elected to lead and they have to lead,” he said.

Chuck Todd of NBC’s “Meet the Press” moderated the brief discussion. It was part of the inaugural symposium for the MGM Resorts Public Policy Institute at UNLV, which aims to elevate bipartisan solutions to workforce issues. Chicago Mayor Rahm Emanuel delivered the keynote address focused on education reforms in his city.