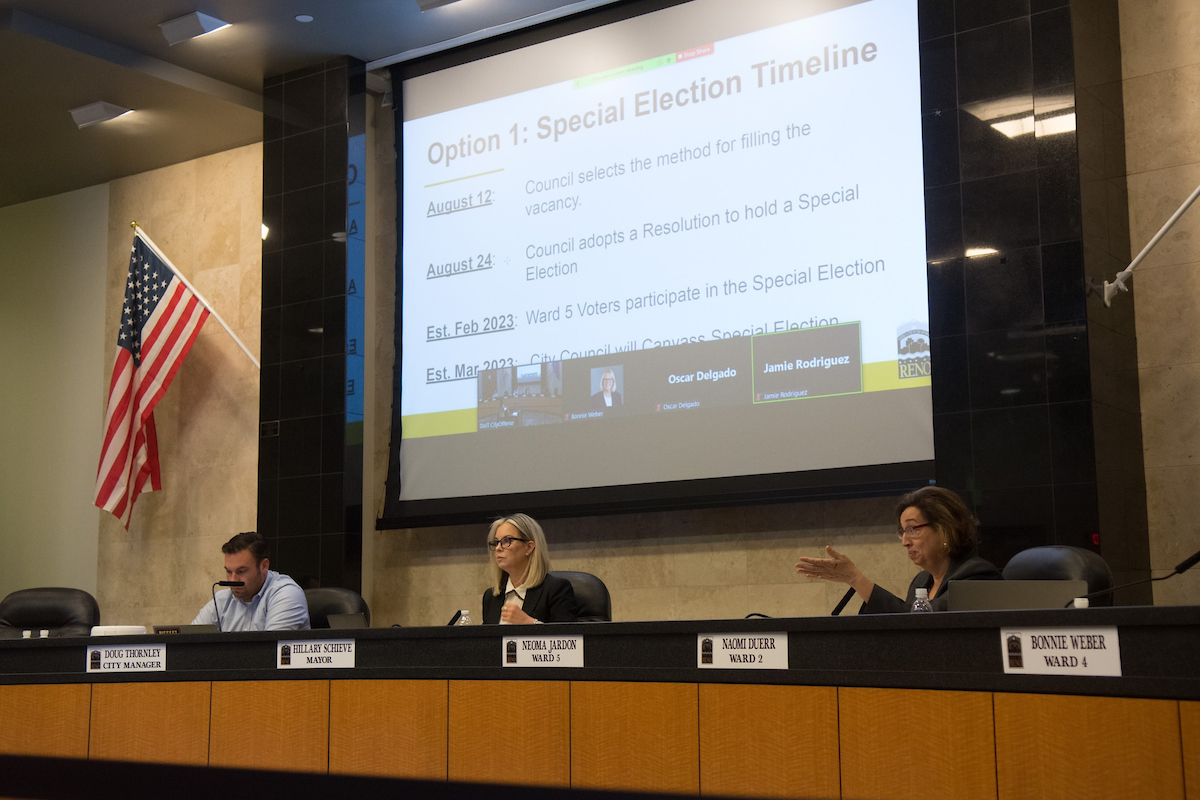 The Reno City Council will make an appointment — rather than hold a special election — to select the next Ward 5 representative after Councilwoman Neoma Jardon announced her resignation earlier this week.

Council members voted unanimously at a special council meeting on Friday to take the appointment route, though Jardon and Councilwoman Jenny Brekhus were not present for the vote. Jardon announced on Aug. 8 that she was resigning to become the executive director of the Downtown Reno Partnership, starting next week.

Appointments are a common way to fill vacancies when elected officials resign. Most recently, at-large Councilman Devon Reese was appointed in 2019 to fill out the term of David Bobzien, who resigned to take a position in Gov. Steve Sisolak’s administration.

If the council were to hold a special election, the candidate filing period wouldn’t begin until January 2023. Ward 5 voters would then vote in February, and the council would canvass the vote in March. That means the seat would be vacant for about eight months, with a new council member taking office in April or May of 2023.

“These people can have a say on who it is, instead of another ‘yes person,’” Lorton said. “They'll come back and say they want to save money. Well, I don't think leaving the public out of this process is worth saving money over.”

Holding a special election would cost the Washoe County Registrar’s Office about $102,000 — not counting what it would cost to open and staff polling locations, according to the information presented to the council.

Brekhus also said she was in favor of a special election.

“I have strong reservations if this body decides to go through with an appointment,” she said.

Brekhus had to leave early for a doctor’s appointment that she could not reschedule and urged council members to not vote on the issue without her present.

Schieve and Councilwoman Naomi Duerr said they had planned to vote for a special election. But after further information presented to the council and explanation from the interim Washoe County Registrar Jamie Rodriguez, who joined the special meeting via Zoom, the council decided the timeline to hold a special election was too long to leave the seat vacant.

Rodriguez said that despite the  general election voting wrapping up in early November, a bulk of the work would happen after that. Coupled with the holidays, that delay would push the special election to the beginning of next year.

Duerr suggested to Rodriguez that the election for the Ward 5 seat run parallel to the general election this fall, but Rodriguez said her office did not have the voting equipment needed to do that.

Ultimately, the council decided that leaving the seat open for that long was not worth holding the special election and opted for an appointment, encouraging those living in Ward 5 to apply for the seat.