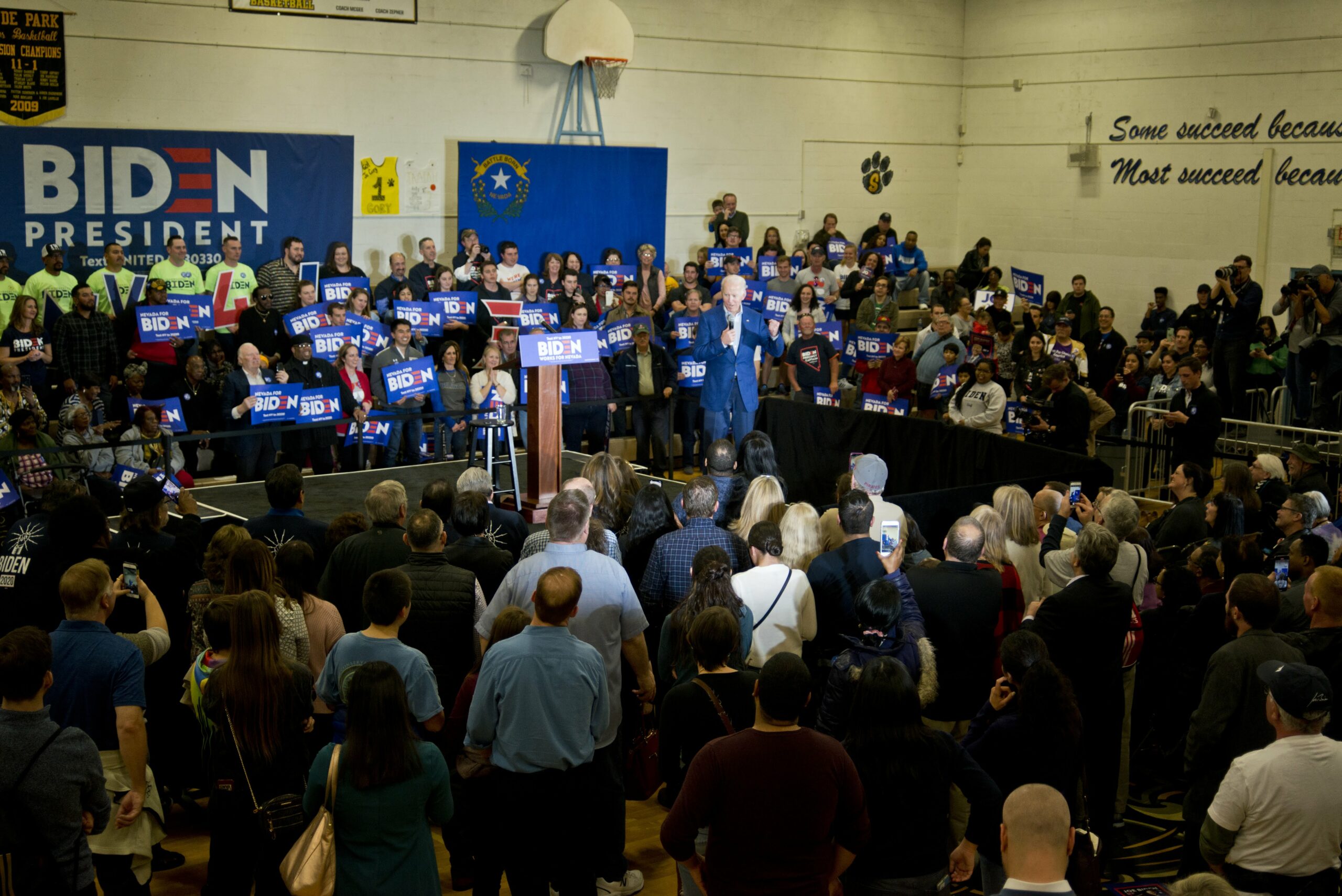 Nevada’s rapidly diversifying electorate didn’t widen the Democratic margin of victory in the state’s presidential election between 2016 and 2020, suggesting that newly activated voters of color may not be as reliably Democratic as previously thought, a new analysis released Wednesday by Democratic voter data analysis firm Catalist shows.

While Nevada’s Latino community has long served as a bulwark for Democrats, Catalist’s report found that President Joe Biden’s margin of victory in the state remained even with former Secretary of State Hillary Clinton’s win four years earlier — despite overall growth of the Latino electorate — as Latino voters by and large shifted away from the Democratic Party. The most reliably Democrat subsets of Latinos, including younger, non-college educated and female voters, saw the biggest shifts, though they remain steadfastly Democratic.

The report’s findings gesture to some of the questions Democrats face in the upcoming election cycle as they decide which subsets of the electorate to target and how to do so. Catalist examined both Nevada and Wisconsin in the new report.

“Nevada is just a very interesting state. Given how large the Latino population is and how relatively small the white population is relative to the country as a whole, it actually is one of the places where we didn't see Biden improve in the real same way in his margin relative to Clinton that happened almost every other place,” said Jonathan Robinson, director of research for Catalist and the report’s author.

Catalist’s report found a significant number of first-time voters participated in the 2020 election but noted that newly activated voters — for instance, among the Latino population — are often less politically polarized, meaning they are less likely to vote the way demographically similar, longstanding voters do. That means Democrats may not be able to count on the support of new voters of color in the same way they rely on longtime voters of color to carry them to victory.

“In many ways, Nevada encapsulates some of the most conventional-wisdom-defying aspects of the 2020 election cycle, with dramatic increases in turnout and a fast diversifying electorate resulting in a similarly narrow victory in the state,” the report said.

Among the report’s other Nevada-specific findings: a substantial jump in the number of Asian American and Pacific Islander voters; a divergence from the national trend with white college and non-college educated voters’ support for Democrats; a significant shift in the demographics of mail voters; and a sizable influx of new Nevada voters.

Catalist’s analysis relies on a pooled model, meaning estimates are derived from national models, granular election results, survey data in states, demographic modeling and other “building blocks,” according to the report. It cautions that statistical analysis of smaller populations and subpopulations “come with higher levels of uncertainty.”

Below, The Nevada Independent explores some of the report’s most notable findings.

Joe Biden won Nevada by the same margin of victory as Hillary Clinton, despite a massive increase in voter turnout

While Biden outperformed Clinton in 2016 nationally, that wasn’t true in Nevada. The report found that Nevada and Florida were the only two states where Democrats lost ground or performed just as well as they did in the final vote margin compared to 2016.

Both Clinton and Biden won Nevada by 2.4 percentage points, with the former winning the state by about 27,000 votes, compared to about 34,000 for the latter.

The report, however, noted that the “relatively similar” margins “obscure important changes in Nevada’s electorate since 2016.”

Notably, turnout for the Republican and Democratic presidential candidates increased from 1.05 million in 2016 to 1.37 million voters in 2020 — an increase of about 30 percent — and Nevada had the highest portion of first-time voters, about 21 percent, and new presidential voters, 17 percent, of any battleground state.

Nevada also saw white non-college educated voters drop by 2.8 percentage points in the electorate between 2016 and 2020, compared to a 0.4 percent drop nationally.

In 2008, voters of color represented 28 percent of Nevada’s electorate. They represent 36 percent today — an increase of 8 percentage points, compared to a shift of only about 5 percent nationally, the report found.

While Latino voters remained “highly supportive” of the Democratic ticket in 2020, they were less supportive than they were of the 2016 ticket, the report found. Nationally, the Clinton-Kaine ticket captured 71 percent of the Latino vote in 2016, compared to only 63 percent for the Biden-Harris ticket in 2020.

Because Nevada has more Latino voters in its electorate than the national electorate does — 16 percent in 2020, compared to 10 percent nationally — and because the state saw a 35 percent increase in the raw number of votes cast by Latinos between 2016 and 2020, the report found that declining levels of Latino support for Democratic candidates “contributed significantly to the narrow result” in Nevada.

If Latino support had stayed stable from 2016 to 2020, Democrats would have won Nevada by about 55,000 votes rather than 35,000, boosting Biden’s margin of victory by nearly 2 percentage points, the report said.

The report found that the Latino voters who shifted most toward Republicans were actually the ones most likely to support Democrats overall — younger Latinos and Latinos without a four-year college degree. The report found that while Latino voters under the age of 30 supported Biden with 67 percent of the vote, that was a 9 percentage point decline since 2016. By contrast, older Latino voters supported Biden with 57 percent of the vote, but only saw a 3 percentage point shift since 2016.

“These year-over-year trends do not get at the exact reasons why Latino voters shifted their votes from 2016 to 2020, but the 2018 shifts away from the Democratic Party suggest that explanations should account for the 2016 to 2018 shifts in addition to any unique pandemic, economic and campaign conditions in 2020,” the report said.

The report noted that data suggest that the 2020 results should not be viewed as a “fluke” but rather “part of a multi-cycle trend.” It suggested that the activation of new Latino voters may have contributed to declining support among Latinos for Democrats, given that new voters are less politicized than already active voters of the same demographic background and more likely to possibly split 50-50 between the parties.

“When weighing why these changes in Latino voting patterns occurred, it’s difficult to arrive at exact answers, but it’s worth remembering that newly activated voters are understandably not as politicized as demographically similar consistent voters,” the report said.

Organizers within Nevada’s Asian American and Pacific Islander (AAPI) communities have been working hard for the past couple election cycles to boost turnout — and the data show those efforts are paying off.

By linking AAPI voters to census tracts, the report was able to identify which groups of AAPI voters grew the most in terms of turnout. It found that Filipino voters increased by 47 percent, Vietnamese voters by 44 percent, Chinese voters by 43 percent, Japanese and Korean voters by 30 percent each and Indian voters by 29 percent.

To that end, Nevada saw a substantial number of first-time voters participate in the 2020 election. The report found that nearly 40 percent of Nevada 2020 voters had never voted in the state, including 17 percent that were entirely new, first-time voters and another 21 percent who were new to voting in Nevada.

White voters in Nevada are different from those nationally

The report additionally found that the Biden-Harris ticket overperformed in rural and suburban areas compared to 2016 — as those areas have grown more diverse — while urban areas, which also have gotten more diverse, actually saw declines in support for Biden over the last four years.

Mail voters were younger, more Democratic and more diverse in 2020 compared to 2016

Nevada saw significant shifts in its vote by mail population in 2020 as a result of the decision to send mail ballots to all active registered voters.