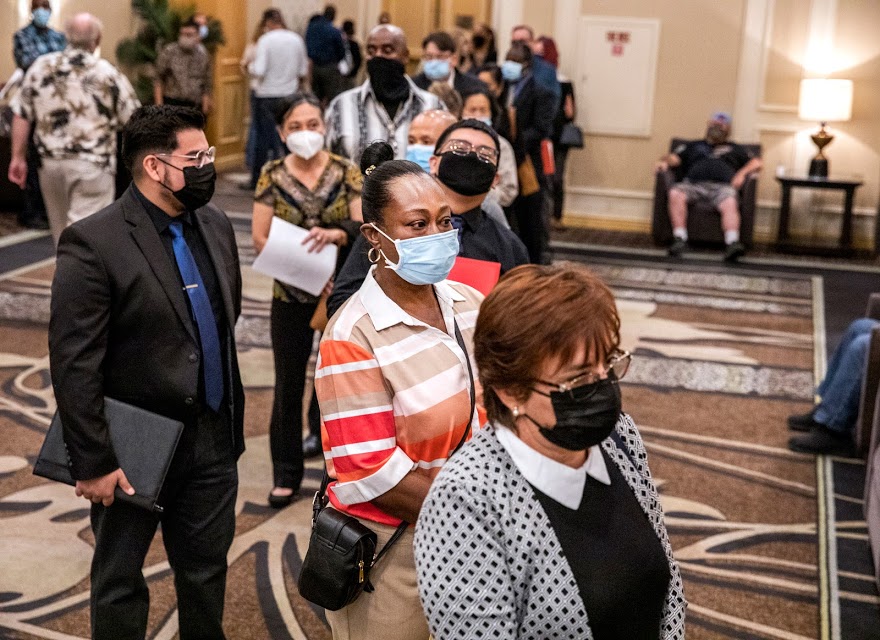 Welcome to the ninth installment of “Economic Crossroads,” a recurring feature formerly known as “Road to Recovery” that provides semi-regular updates on Nevada economic news and data. We modified the name to reflect the changing economic conditions. Find the latest Nevada economic data here.

The U.S. inflation rate is at a 40-year high. This year, the stock market recorded its worst first half since 1970, and economic output contracted during the first quarter. In June, the Federal Reserve announced its largest interest rate hike since 1994.

Despite the combination of economic headwinds, the national unemployment rate is historically low at 3.6 percent, and consumer spending remains strong.

Still, the U.S. economy sits in a precarious position. Consumers are facing surging prices for common goods from fuel to fruit, while wages are failing to keep pace. A growing number of economists are warning that a recession is coming.

Just two years removed from the last recession, brought on by the COVID-19 pandemic and related shutdowns, another economic downturn could disrupt the recovery in Nevada, which has the second-highest unemployment rate in the nation at 4.9 percent. The state also has the country’s highest U-6 unemployment rate — a measure that captures the number of marginally attached workers and people employed part-time for economic reasons.

Several Nevada economic and business experts who spoke with The Nevada Independent in mid-July expressed varying levels of optimism and uncertainty about how the current economic conditions could lead to a recession.

What is a recession?

In broad terms, a recession is when there is a decline in general economic activity. It has often been used to define a period of at least two consecutive quarters of declining gross domestic product (GDP), a measure of the value of all goods and services produced in a country.

The National Bureau of Economic Research, which identifies periods of economic recessions and expansions, characterizes a recession as involving “a significant decline in economic activity that is spread across the economy and lasts more than a few months.”

But not all recessions are created equal, said David Schmidt, chief economist at the Nevada Department of Employment, Training and Rehabilitation. They can be short, like the pandemic-induced recession, or long, like the Great Recession. They can have lasting effects or a minimal impact on certain industries.

Schmidt pointed to the 2001 recession, which followed the collapse of the dot-com bubble, as an example of a recession that did not have as deep of an impact on Nevada’s economy. So although a recession could have far-reaching effects on consumers, it could also be a natural part of the economic cycle, or a “correction” in the economy, as Schmidt put it.

Is a recession coming?

The national economy is in a unique position. Brian Gordon, a principal with the Las Vegas-based firm Applied Analysis, highlighted the unusualness of potentially approaching a recession when the labor market is in such a strong position.

“It seems counterintuitive when we have twice as many job openings relative to the number of people that are seeking jobs that the economy could potentially be in or approaching a recessionary condition,” he said.

At the center of the country’s response to rising inflation and worsening economic conditions stands the Federal Reserve. The nation’s central bank, commonly known as the Fed, controls benchmark interest rates, which in turn affect mortgage rates, loans, investments and more.

Stephen Miller, director of research at UNLV’s Center for Business and Economic Research, said the Fed is stuck “between the rock and the hard place,” as it works to bring down the inflation rate without causing too many job losses.

If the Fed moves too slowly to raise interest rates, inflation will likely remain high, continuing to put consumers in a pinch. If the Fed raises rates too aggressively, it could dampen economic growth and trigger a recession.

Miller likened the Fed’s situation to trying to land a plane on an aircraft carrier with a runway that is too short. The Fed must be precise to navigate a “soft landing” for the economy.

But even as the Fed has already taken aggressive action — raising interest rates by 0.75 percentage points in June, the largest hike since 1994 — consumer spending has remained strong. Miller noted that government stimulus payments and extra unemployment benefits paid out during the pandemic have given consumers more cash to save and spend, which has driven demand even as prices have risen.

Still, the high inflation rate has severely dampened consumer confidence. Gordon and Miller, as well as John Restrepo, the principal at Las Vegas-based RCG Economics, each used the phrase “self-fulfilling prophecy” to describe the effect of low consumer sentiment on the economy.

“Oftentimes perceptions become reality,” Gordon said. “Consumers are paying huge premiums at the pumps. They're seeing higher costs when they go to the grocery store, and their housing … That's playing a role in their overall confidence. On top of that, there is a lot of talk about a recession and the timing of that, and sometimes this becomes a self-fulfilling prophecy.”

If consumers believe that a recession is coming, they may pull back from spending, slowing economic activity and further driving recessionary conditions.

Though such a shift in the economy remains to be seen, Gordon described the possibility of a recession soon as “relatively high,” and Restrepo said he sees a “potential recession sometime at the end of the year, into next year.” But both raised further questions about what it would look like: How deep could the recession be? How long could it last?

What could an upcoming recession mean for the job market?

Schmidt explained that entering a recession would likely mean a bump in the unemployment rate and, consequently, an uptick in unemployment insurance claims.

As the Fed raises interest rates, Schmidt said he expects businesses may pull back on investment, reducing economic activity and, in turn, the number of available jobs. But because the labor market is in a strong position, an upcoming recession may not have as significant of an effect on unemployment.

Restrepo explained that because the labor force participation rate is lower than it was just a few years ago — after many workers retired early or never returned to the workforce during the pandemic — there is “not as much of an oversupply of labor that would cause the labor markets to have a serious problem if we enter a recession.”

Even if some layoffs did occur, the current labor market could likely withstand such losses. Since 1948, the average national unemployment rate is nearly 6 percent, well above the current national average rate of 3.6 percent.

“The low unemployment rate gives the Fed some opportunity to slow the economy without having a huge cost on people in the labor force,” Miller said.

What could another recession look like for the Silver State?

At a conversation with reporters earlier this week, Gov. Steve Sisolak expressed optimism about the state’s economic outlook, saying he was hopeful that a recession would not occur. But he also acknowledged the damaging effect the Fed’s interest rate hikes could have on some consumers moving forward.

“I think that the Fed was probably a little slow in reacting and now they're reacting in big steps, when you're talking 75 basis points or 100 basis points, you know, interest rate increases,” Sisolak said. “That's significant. I mean, that's not something that can normally be handled by people, which is going to have a longer-term effect. That's going to affect people with credit card loans, credit card balances, it's going to affect adjustable home mortgages and car payments.”

Despite those concerns, Sisolak attempted to quell any recession fears, saying “if we do enter into one, it's going to be very short and shallow.”

Schmidt echoed that optimism. He said Southern Nevada’s economy is better prepared for the next recession following the pandemic because many of those businesses have already made it through worse economic conditions. He also expressed confidence in the local tourism economy.

“We're still down 30,000 jobs in the casino industry compared to where we were prior to the pandemic,” Schmidt said. “But I think the jobs that are there are the ones that are the most needed, are the most essential, and so the least exposed to economic fluctuations.”

But Restrepo did not share that optimism. He said a recession could result in consumers tightening discretionary spending, which would hurt Southern Nevada’s tourism-reliant economy.

Gordon expressed a similar concern for the region, describing Las Vegas as the “most tourism-dependent economy in the country.” But he added that there is a way for the hospitality industry to offset some reduction in tourism through the return of more convention and international travelers.

Gordon pointed to a combination of low availability and high demand as factors driving those increases, but noted that climbing mortgage rates — which have been driven by the Fed’s monetary policies —  are affecting both demand and availability within the market. In June, median home values in both Las Vegas and Reno declined from the previous month, marking Southern Nevada’s first monthly drop in prices since April 2020.

“We're starting to see inventory increase relative to just where it was 30 days ago,” he said. “Some of those dynamics are starting to raise some concern as to where the market is headed on a go-forward basis …  The reality is, though, there will probably be some settling of the market over the next year, six to 12 months.”

Schmidt said he has seen the housing market cooling off amid the rise in mortgage rates, but said he does not expect a potential recession to have a negative effect on the construction industry because demand for housing remains high.

Beyond the possible effects of a recession on specific industries, Restrepo highlighted regional factors that could affect the state’s economy. For Restrepo, those external factors, whether it be the ongoing drought or limited land available for new development, bring uncertainty to his economic outlook.

What global forces are at play?

Though the economic experts do not all exactly agree about the odds that the U.S. will soon enter a recession, they generally noted that many factors affecting that possibility are out of the country’s control.

Miller highlighted various geopolitical issues that continue to affect economic conditions, such as the war in Ukraine driving up food and energy prices, and the sustained effect of the global COVID-19 pandemic on supply chains.

Amid so much uncertainty about how those global situations could change and how effectively the Fed can slow demand through raising interest rates, Restrepo described the current economic conditions as a “weird transition period.”

“Since the pandemic started … it’s supply chain issues, or people retiring, or business closures, changing spending habits, and all those sorts of things,” he said. “Normal business cycles, we haven’t seen that yet. 2023 … is the first year to get back to some kind of ‘pre-pandemic normal economy.’”

As consumers await a return to that so-called “normal economy,” Schmidt said there is an expectation that the Fed is going to “do what it takes to stop inflation.” Though that will likely mean slowing economic activity as interest rates continue to rise, Schmidt highlighted the importance of remaining optimistic.

“I think confidence is a really important thing,” he said. “The more that we believe things will be okay and work out, they probably will. If everyone gets afraid and pulls back, that’s really what causes recessions.”

Updated: 7/21/22 at 7:10 a.m. - This story was updated to include a link to The Nevada Independent's Economic Indicators Dashboard.