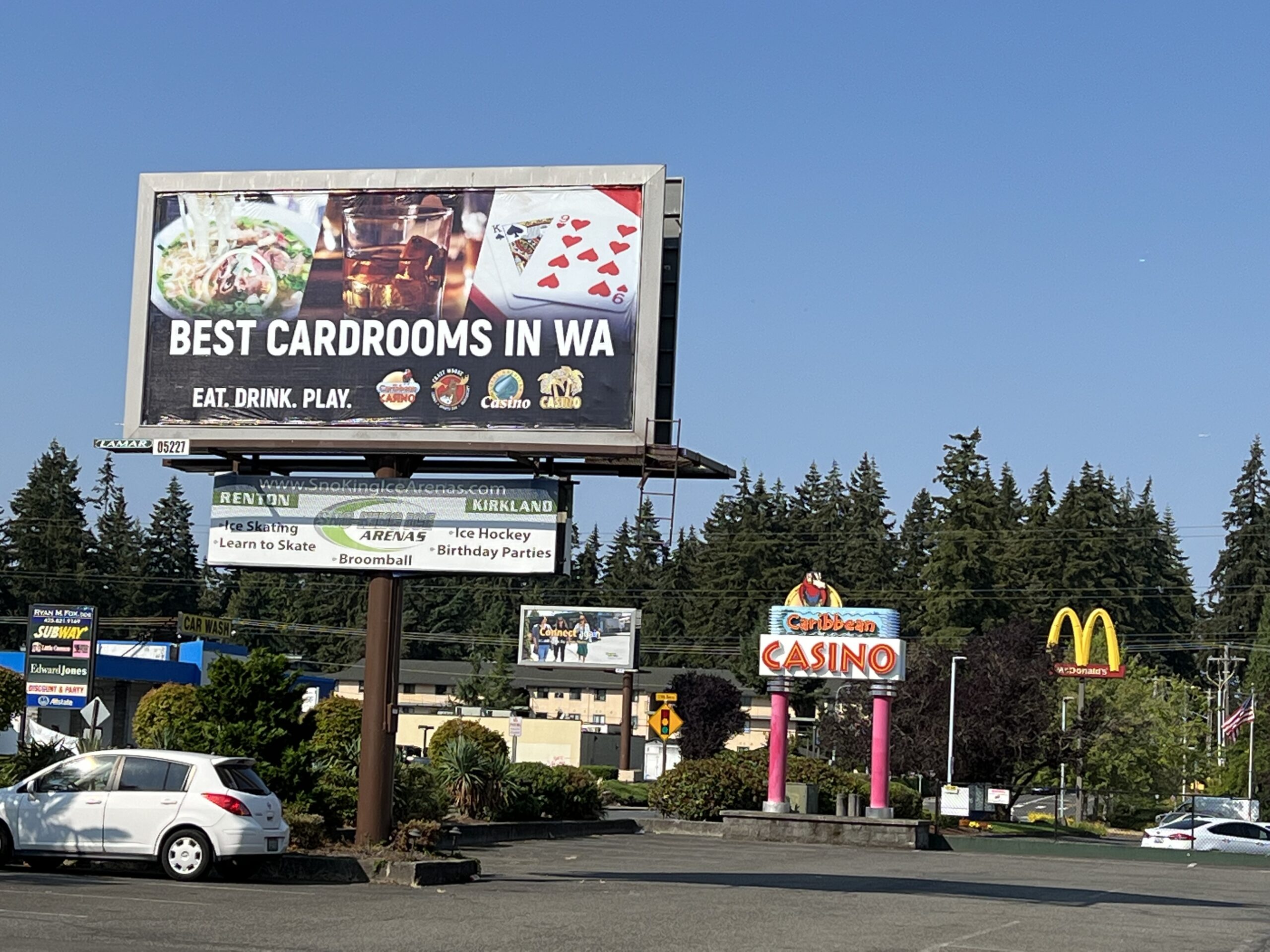 However, Maverick CEO Eric Persson said the company’s future is centered in the Pacific Northwest.

Maverick owns and operates 19 of Washington’s 44 licensed cardrooms, which he said account for roughly 50 percent of the company’s overall revenues. The cardrooms are limited to 15 table games – baccarat, poker and variations of blackjack.

But Persson has even loftier goals.

Maverick failed in 2020 and 2021 to get the Washington Legislature to include cardrooms in legislation that allowed the state’s tribal casinos to offer sports betting. In January, the company filed a federal lawsuit claiming the state unlawfully granted Native American casinos a “discriminatory tribal gaming monopoly.”

So far, 20 of Washington’s 29 tribes with gaming operations have amended their compacts to add retail sports betting. Only nine of the tribes, however, have launched retail sportsbooks at 12 casinos. Mobile sports wagering is allowed, but only within the physical confines of the casino.

Persson said expanded sports betting would allow Maverick to convert small portions of the cardrooms into retail sportsbooks and allow each location to hire up to 10 additional employees. Maverick has roughly 2,000 employees in Washington.

He added that Maverick would again seek a legislative change to allow sports betting at the company’s small facilities when state lawmakers gather next year. The legal fight, he said, would also continue.

The lawsuit was originally filed in Washington, D.C., but has since been transferred to the federal District Court in the state of Washington.

“We think the law passed by the state of Washington is ultimately being misapplied,” Persson said in an interview. “We think this will eventually wind its way to the Supreme Court. We’re extremely confident that when it does, we’re going to be on the winning side.”

Persson is not generally considered a shrinking violet.

In recent months, he’s become a fixture on the poker circuit in events televised through a YouTube channel sponsored by the Hustler Live Casino, a Los Angeles-area cardroom. Wearing hats and shirts with Maverick Gaming logos, Persson was called “the most exciting new player” in high-stakes poker by PokerGo.

An April video of Persson trash-talking with Phil Hellmuth, who has won a record 16 bracelets at the World Series of Poker, during a heads-up match has drawn more than 3.6 million views. Last week, Persson took down a pot of $250,000, withstanding a $110,000 bluff by poker icon Phil Ivey.

Prior to launching Maverick, Persson’s gaming career included more than a decade with Las Vegas Sands Corp., overseeing the company’s global slot machine operations on the Strip, in Macau and in Singapore. He also served as president of Aruze Gaming, with oversight over the slot machine manufacturer’s sales team in North and South America and Macau.

In early 2020, Maverick agreed to a $230 million transaction with then-Eldorado Resorts to acquire the company’s casino in Shreveport, Louisiana, and MontBleu Casino and Resort in Lake Tahoe (now Bally’s Lake Tahoe). The pandemic, however, led Maverick to withdraw from the deal.

Maverick bought its three Colorado casinos — two in Central City and one in Black Hawk — and a gas station/convenience store with slot machines located in Golden in 2019. Properties included in the transaction have 1,500 slot machines, 20 table games and 119 hotel rooms.

The company launched its own sports betting brand — Maverick Sports — at its Colorado casinos in 2021. IGT provides the platform for a retail sportsbook at the Z Casino in Central City and for a statewide mobile wagering app.

Maverick does not operate sports betting at its Nevada casinos —  the locations are part of the William Hill sportsbooks network, which is operated by Caesars Sportsbook.

Most of Maverick’s acquisitions have included financing from New York-based HG Vora Capital Management, a private investment firm. Last year, Maverick refinanced its balance sheet to include a $310 million loan and a $55 million revolving line of credit with several financial backers, led by Deutsche Bank.

The refinancing retired all debt held by HG Vora, but Persson said the investment firm is still a financial partner with Maverick, having bought into a portion of Deutsche Bank’s refinancing.

As part of the refinancing, Maverick sold the land underneath its two Wendover casinos and its two Central City casinos to investment firm Angelo Gordon.

Maverick Gaming converted from a Nevada-based LLC to a Washington-based LLC in February, according to filings with the secretary of state offices in both states. The company opened its corporate headquarters in Kirkland, adjacent to two of its Washington locations – Caribbean Cardroom and Casino Caribbean.

Persson is a native of Hoquiam, Washington – roughly two hours west of Seattle – and a member of Western Washington’s Shoalwater Bay Tribe, which operates the Shoalwater Bay Casino. The tribe filed a motion seeking to intervene in the case in opposition to the gaming company.

In a statement provided by a Seattle public affairs firm assisting Maverick in the federal lawsuit, Persson said his dream was to build “a market-leading gaming company” in his home state.

“I know that our perspective on sports betting is at odds with those who prefer a monopoly for Tribal casinos, but I respect their right to advocate for their members,” Persson said.

Washington is one of 31 states with legal sports betting and one of five states – along with New Mexico, North Dakota, Wisconsin and North Carolina – where tribes with casinos are the only licensed operator.

“Maverick’s lawsuit is also a direct attack on tribal sovereignty,” George said. “As sovereign tribes, we have carefully and thoughtfully negotiated tribal gaming compacts with the state of Washington. Now, in violation of our sovereignty, Maverick seeks to wipe out every one of those compacts.”

In a January statement, Gibson Dunn attorney Ted Olson, a former U.S. solicitor general who represented New Jersey in the PASPA lawsuit and is now representing Maverick, said IGRA was being used “to insulate tribes in Washington State from competition that exists in many other states with legal gaming marketplaces.”

Olson said the act, “was intended to guarantee parity between tribal and non-tribal gaming, but unfortunately, Washington State is misusing IGRA to instead create tribal monopolies on certain types of gaming, such as sports betting.”

Maverick representatives said Washington law already allows for poker games at a state-licensed cardroom or a tribal casino, believing the choice does not have implications for tribal sovereignty.

Catering to the locals

Maverick’s cardrooms are primarily located in the communities surrounding the Seattle metropolitan area, including Kirkland, Bothell, Lakewood, Everett and Renton. Maverick also has a card room in Yakima, which is roughly two hours southeast of Seattle.

The cardrooms are often part of small strip malls or are located in nondescript buildings. All offer food counters and bar areas. A handful have off-track betting kiosks for horse racing.

The locations cater to the neighborhoods, much like a local tavern. Many of the bars sell electronic pull tabs, a low-stakes gambling game similar to keno or bingo.

“Baccarat is 80 percent of my business in Washington,” Persson said of the market which has several Asian population centers.

“The people who choose us want a more intimate setting and our team members are going to get to their customers,” Persson said. “We’re a different product. Many of our customers are a little bit older and have a little less mobility. They’re not interested in the bigger properties.”

The Washington State Gambling Commission publishes annual financial statements for the cardrooms, but has not yet posted 2021’s figures. In 2020, when legal gambling across the U.S. was interrupted by the pandemic, only 16 of the 43 cardrooms operating that year posted a net positive income.

Persson said Maverick pays an average of $17.4 million annually in local taxes in the jurisdictions where it operates. Under the company’s proposed legislation, Maverick would pay the state a 10 percent tax on all sports betting revenue.

Maverick acquired its cardrooms in several transactions between 2018 and 2019. Financial terms were not disclosed because Maverick is a private company. Persson said a plan to reposition the locations under four brands – Macau Legend, Dragon Tiger Casino, Aces Poker and Maverick – was slowed by the pandemic. He hasn’t ruled out expanding the company’s presence.

“We’re more focused on the existing assets,” he said. "But eventually there will be some expansion.”

Persson said sports betting would provide “a meaningful boost to our overall net revenue” in Washington.

“Sports betting is a service where there is a lot of consumer demand,” Persson said. “We think it's one more reason to be in a cardroom playing blackjack or poker and watching sports on the weekend. It’s important to us and our existing businesses.”