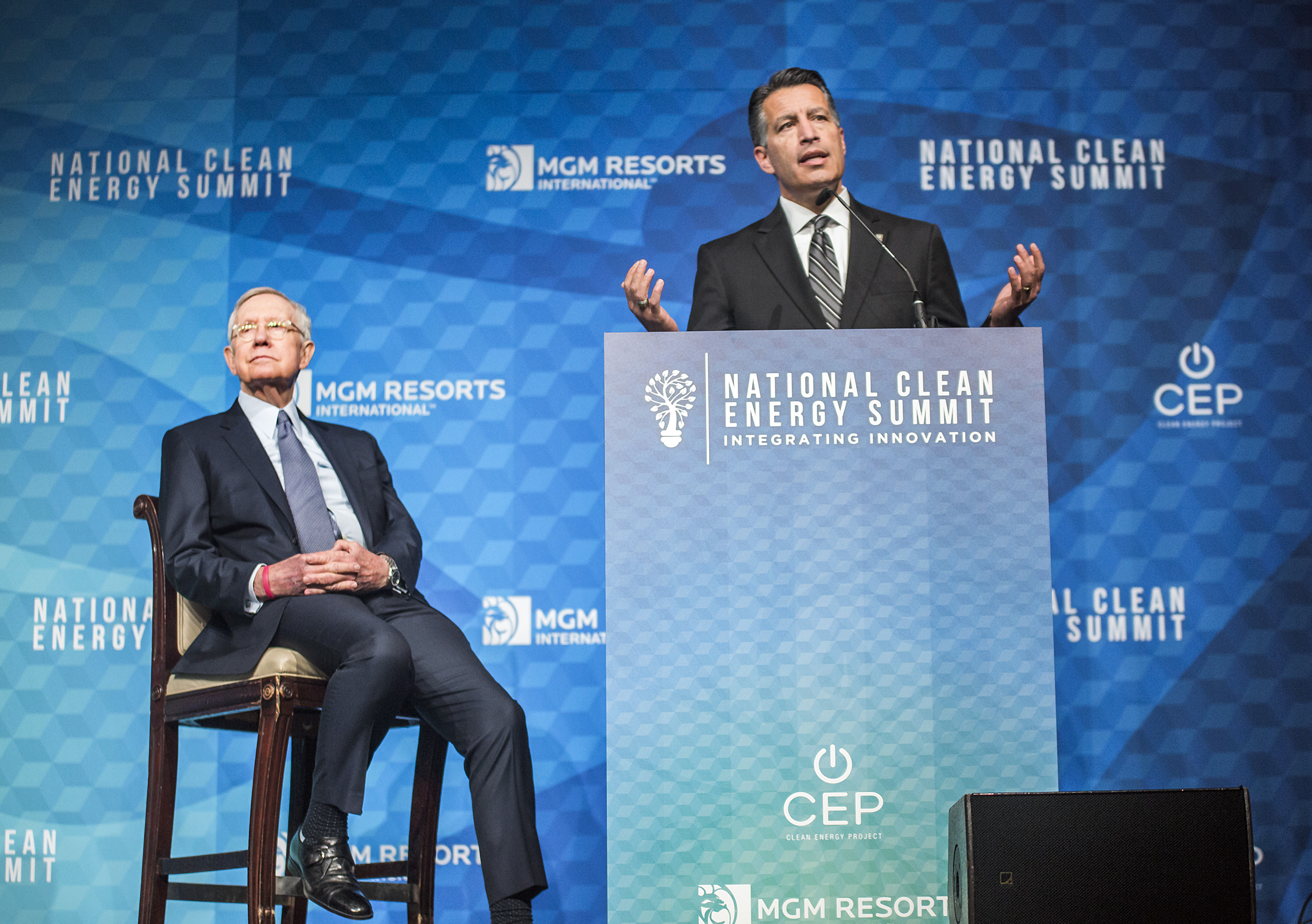 That was the four-word message coming out of the Clean Energy Summit, the ninth edition of a conference co-hosted by a who’s who of prominent Nevada officials including Gov. Brian Sandoval, retired senator and Democratic powerhouse Harry Reid and MGM Resorts CEO Jim Murren.

The day-long conference hosted at the Bellagio featured multiple panels focused on ways that state and local leaders could lower carbon emissions — even as the Donald Trump administration has taken steps to move in the opposite direction, pledging to withdraw from the historic Paris climate accord and revive a domestic coal industry that is being squeezed by cheaper fuels.

“States like Nevada are leading the way,” former vice president and climate activist Al Gore said during his keynote speech. “California is leading the way, Washington state. I was worried when [Trump] made his [climate accord] announcement but then the next day all these states and cities and business leaders, Jim Murren among them, said we’re still in the Paris agreement.”

MGM Resorts joined more than 150 companies including Berkshire Hathaway Energy, NV Energy’s parent company, in supporting the Paris accord when Obama first signed it, but neither the corporation or Murren have commented on plans to withdraw from the agreement.

During his introductory remarks, Sandoval listed his administration’s accomplishments in attracting clean energy investment and moving toward a more renewable grid. Nevada has invested heavily in clean energy, giving out more than $700 million in incentives to lure private development to the state. But Sandoval said the state has seen a $7 billion return on that investment and now is responsible for exporting 35 percent of the clean energy in the West.

“I believe that Las Vegas is the perfect destination to host this conference,” Sandoval said, calling the state a “trailblazer in renewable energy.”

But the conference comes amid an uncertain energy future both in states and nationally, as the Trump administration takes steps to prop up fossil fuel industries and end a “War on Coal.” No members of the administration spoke at the conference — a far cry from previous iterations of the conference, which attracted speakers such as former President Barack Obama in 2015.

In addition to federal uncertainty, Nevada itself faces a state-specific issue in the specter of a ballot question that would open the state energy market to retail competition, a massive shift that Sandoval used as a rationale for vetoing several ambitious renewable energy bills that came out of the 2017 legislative session.

Sandoval said he voted for the ballot question — known as the Energy Choice Initiative — in 2016 and planned to again in 2018, but said the “unanswered questions” associated with implementing the redesigned energy market made him hesitant to commit to ambitious renewable energy goals.

“These were questions that were debated for a few weeks, and we’ve had a committee that’s been studying this for months that hasn’t really reached any definitive conclusions,” he said. “That is going to be a very big issue in 2019, and it’s going to affect every person that resides in the state of Nevada.”

California Gov. Jerry Brown was scheduled to speak at the conference but stayed in California to monitor the deadly fires in the northern part of the state. Brown has pushed to regionalize the Western grid to better balance renewables and resources across state lines. Sandoval said he supports the idea and has talked to Brown about the plan.

“He and I have had those conversations and it’s a win-win for both states,” Sandoval said.

After warning that climate change would lead to extreme weather and political instability, Gore attempted to put a positive spin on news that the Trump administration planned to withdraw from the Paris Climate accord. He stressed that re-entering the agreement would take a modicum of time and that the fact that the process of withdrawing from the agreement has to wait until at least 2019.

“The world has made this decision,” he said. “We need to pick up the pace, and thank God Nevada is helping to lead the way.”

In a separate interview, retired U.S. Senator Harry Reid took a more direct stance on clean energy, saying the coal industry was “no longer viable” and that efforts to prop up the carbon-intense fuel industries as “factually meaningless.”

“It’s also one of those things that’s a lot of fluff and no substance, because the industry has already made the choice,” he said. “Because coal is too expensive, economics, not only in the production of electricity (but) also what it does to the environment. So it’s not going to save any jobs. The industry said a long time ago that they’re going with something else.”

Since the clean energy summit started in 2008, the cost of solar panels have plummeted and the deployment of renewables have exceeded expectations. Clean technology has become more attractive to utilities, especially as big corporate customers are increasingly demanding it. In recent years, several large companies, from Apple to Walmart, have pledged to eventually power their businesses with 100 percent renewables.

Companies looking to relocate to Nevada often ask first about the availability of clean energy, Sandoval said. After Google purchased land in Northern Nevada for a future data center, it asked state utility regulators for permission to source 100 percent of its energy from renewables, which the tech giant said was a key factor in its decision-making to expand to Nevada.

Even some opponents of Obama-era regulations like the Clean Power Plan have conceded that the future will be one with lower carbon. Moniz cited a New York Times article that quoted a top utilities regulator in Arkansas who said “ultimately regulations on carbon are coming.” When faced with these types of projections, Moniz said utilities and private companies would be “crazy” to bet on a high-carbon future.

“Let’s face it, just about everyone understands,” he said. “We know where we’re going.”

He shared Gore’s optimism on switching to clean energy but emphasized the importance of de-carbonization in other sectors like transportation.

In 2016, the Nevada Division of Environmental Protection released a report looking at emissions by sector. It found that in 2013 the power and transportation sectors accounted for 34 percent and 33 percent of the state’s greenhouse gas emissions.

Deep de-carbonization, according to Moniz, will require more innovation and he urged Congress to protect research and development funding from proposed budget cuts.

“We need other breakthroughs,” he told Axios reporter Amy Harder during one of the sessions.

Although the conference focused on clean energy in the power sector, it touched upon how new technology is making transportation more efficient with a presentation from Tina Quigley, the general manager of the Regional Transportation Commission of Southern Nevada.

The conference also touched upon energy efficiency. Baker, who was elected governor of Massachusetts in 2014, touted his state’s record in using incentives and targets to encourage utilities and residents to draw less power from the grid. Another panel looked at efficiency within buildings and opportunities to use data to make better choices about energy use.

“What I’m excited about the technologies in energy management is that we will use less electricity to have the same level of comfort and enjoyment we have in our day-to-day lives,” said Cindy Ortega, chief sustainability officer for MGM Resorts.

“I think clean energy is an irresistible force,” Sandoval said at the end of his panel. “I think it’s going to become so pervasive that we won’t need to have a clean energy summit.”