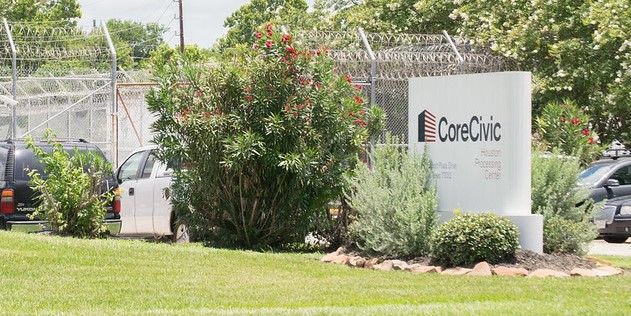 Nevada’s Democratic senators are calling for an investigation into a privately run ICE detention center in Pahrump after reports that an employee was active on a neo-Nazi website and wanted to start a white supremacist group.

The letter from Sens. Catherine Cortez Masto and Jacky Rosen comes after VICE News reported this week that Travis Frey, a captain at the Nevada Southern Detention Center run by CoreCivic, posted on the site Iron March while employed by the private prison company. CoreCivic later said Frey was placed on administrative leave pending a review, but the senators said the revelation raises questions about the standards to which the company holds its employees.

“It is imperative that any private company contracted with the federal government to operate a detention facility be held to the highest standards of care and management,” the senators wrote in a letter released Friday. “It is also critical that transparency and oversight not be hindered because the facility is operated by a private entity through a federal contract.”

Frey didn’t immediately return a voicemail from The Nevada Independent, but CoreCivic provided a statement.

"CoreCivic cares deeply about our employees, communities and the individuals in our care, and we do not tolerate discrimination of any kind," the company said. "We recognize the inherent dignity of the human person and the need to treat every individual with respect. Our company has a detailed Human Rights Policy here that clearly outlines our commitments regarding resident rights and treatment. We also have strong commitments to promoting and supporting a diverse and inclusive workforce."

VICE News reported that Frey used a screen name on the now-defunct website, which had its online archives leaked in November. The news organization identified Frey by personal information he shared, including his personal email address, phone number, birthday, and place of residence.

VICE reported that Frey described himself as a “fascist” on the site and said he was interested in organizing for the Traditionalist Workers Party (TWP) in Indiana, where he worked for CoreCivic in 2016 and 2017. According to the Southern Poverty Law Center, which tracks extremist groups, the TWP “is a neo-Nazi group that advocates for racially pure nations and communities and blames Jews for many of the world’s problems.”

In their letter to the Department of Homeland Security’s inspector general, the senators wrote that “with overwhelming evidence that hate crimes are on the rise in the United States, it is critical for our government to take concrete steps to combat them.”

Cortez Masto and Rosen also pointed to other issues within the private detention center, including the death of an inmate who was apparently strangled by another inmate and the on-site suicide of an employee. They are asking for an investigation into matters including employee screening and how closely the Pahrump site is monitored for compliance to the terms of its federal contract “to ensure vulnerable immigrants are protected while in the custody of DHS or DHS contractors.”

“The federal government has an obligation to ensure that individuals in its care, whether in a federally- or privately-operated facility, are subject to safe and healthy environments,” the senators wrote.