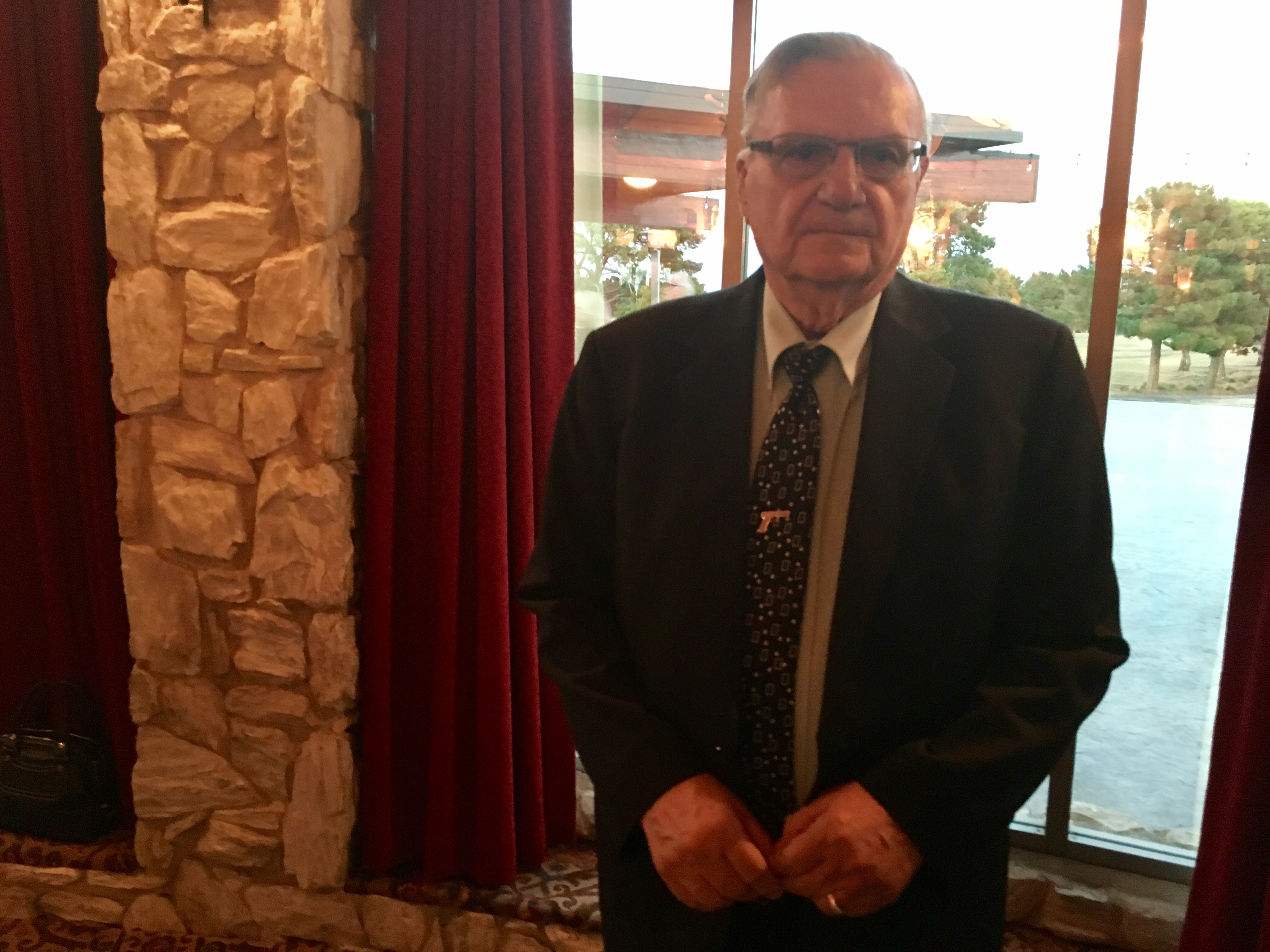 Former Arizona Sheriff Joe Arpaio told a group of conservatives Saturday night that he’s “back in action” because he wants to see President Donald Trump — the man who pardoned him three weeks ago — win re-election.

The controversial former sheriff from Maricopa County, Ariz., announced his political re-emergence in Las Vegas while receiving a “Courage Under Fire Award” from Citizen Outreach Foundation, a nonprofit run by Nevada conservative activists.

Arpaio insisted the recent presidential action, which spared him from prison time for his criminal contempt of court conviction, had nothing to do with the decision. Instead, the 85-year-old spent the bulk of his acceptance speech lobbing praise at the billionaire businessman-turned-president.

“It took me 85 years to finally find out I had a hero, and that was the president today,” Arpaio said. “It had nothing to do with pardons. I didn’t ask for any pardon. I was with him from day one.”

Arpaio gained national notoriety during his 24-year run as sheriff for unconventional tactics, such as making inmates wear pink underwear and live in tents during sweltering Arizona summers, that were part of his “tough on crime” crusade. But Arpaio also took an uncompromising stance on illegal immigration and stoked the “birther” controversy about whether former President Barack Obama was actually born in the United States.

The former sheriff was convicted July 31 of ignoring a judge’s order to stop detaining people whom he merely suspected were in the country illegally. Less than a month later, Trump pardoned him, igniting criticism from both Democrats and Republicans.

But the pair’s bonds run deeper than their stances on immigration. They share a birthdate — July 14 — and a tendency to speak their minds.

Arpaio was an early supporter of Trump’s bid for the presidency, saying he had a gut feeling the political outsider would energize the “silent majority” and win the race.

“President Trump will go down in history as one of the greatest presidents we ever had,” Arpaio said Saturday. “And don’t forget: I predicted he would be president in 2015, so you wait and see what history will show.”

Arpaio called on fellow conservatives to throw their support behind Trump or move aside, and he chastised those who have criticized the president for his recent dealmaking with Democrats.

“What’s wrong with that?” he said. “I don’t care who goes with to make deals, as long as the people of this country win.”

Arpaio’s speech capped an end to the two-day Conservative Leadership Conference organized by the Citizen Outreach Foundation. Conference activities took place at the Tropicana Las Vegas on the Strip, but concerns about security and protesters prompted organizers to move the awards dinner to a location that wasn’t revealed to attendees until Saturday afternoon.

Veteran GOP strategist Roger Stone, who will testify before a House intelligence committee later this month regarding its investigation into Russia’s alleged interference with the 2016 presidential election, also spoke Saturday afternoon at the conference.

Stone cut right to the chase and blasted U.S. Attorney General Jeff Sessions, who earlier this year recused himself from the Justice Department’s Russia investigation.

“Let’s be as clear as we possibly can. It’s time for Jeff Sessions to go,” Stone said. “... We need someone who is committed to the president’s agenda. Sadly, that is not Jeff Sessions.”

Perhaps because he was speaking in Las Vegas — a mere 80 miles from the site of the infamous Bunkerville standoff in 2014 —  Stone threw in a mention of rancher Cliven Bundy during his tirade against Sessions. Stone has said the president should pardon Bundy.

“What can you say about an attorney general who comes to Nevada and praises the prosecution as they denied the due process rights of the Bundy ranchers and their supporters?” he said.