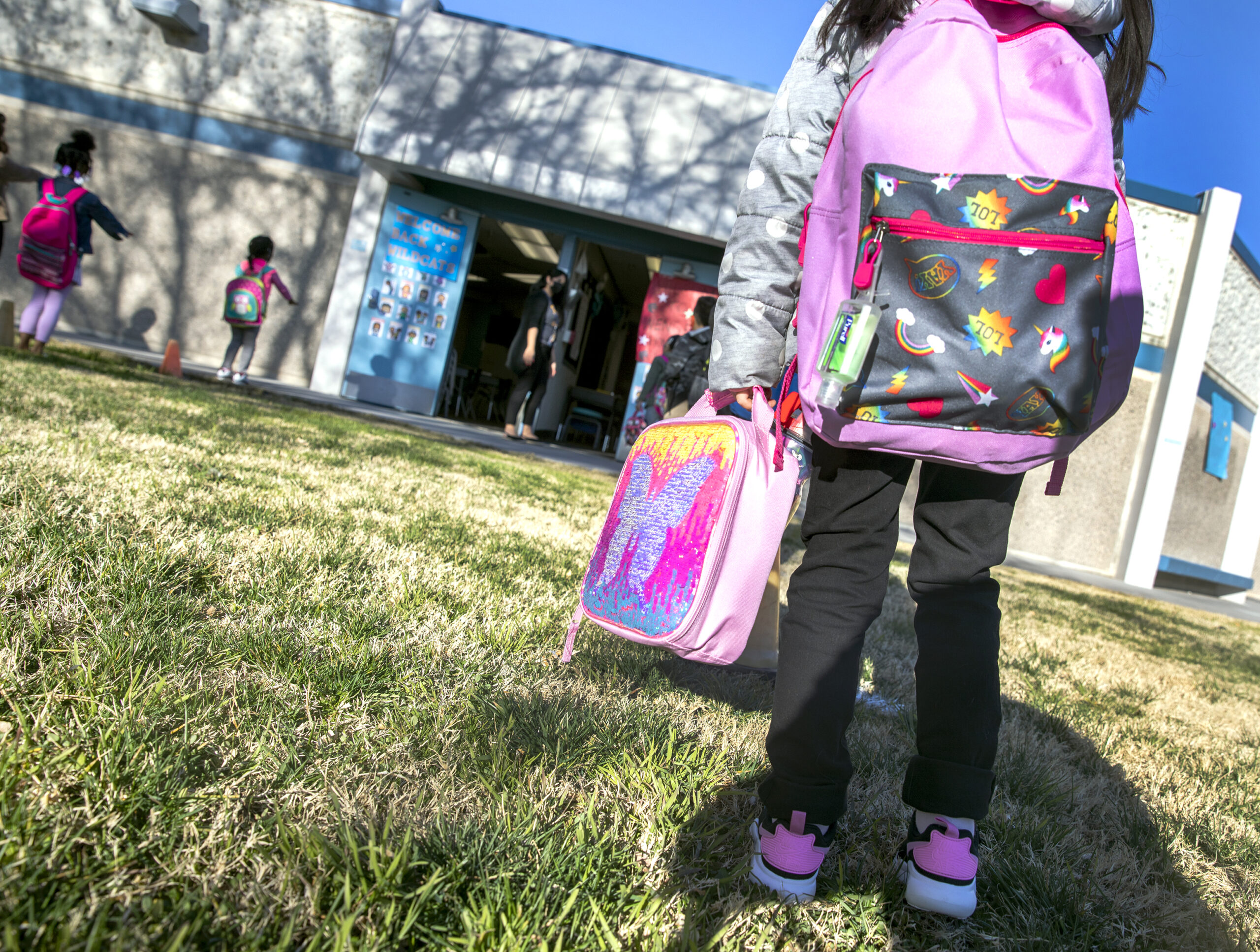 These are the phrases that have become almost ubiquitous with Nevada’s K-12 education system, which has weathered chronic underfunding. But heavy infusions of federal funding — courtesy of three coronavirus relief packages approved by Congress — have flipped the script In Nevada schools and others across the country. Suddenly, school districts’ financial outlooks aren’t so bleak.

The third round of federal funding, included within the American Rescue Plan Act, will bring nearly $964.8 million to Nevada school districts. Combined with funding from the previous two relief packages, that pushes school districts’ total haul to roughly $1.5 billion. The Silver State also received $10 million for the Governor’s Education Relief Fund, $50 million to offset K-12 cuts during the special legislative session last summer and $5.4 million worth of competitive grant awards, among other funds.

Humboldt County Superintendent David Jensen said the federal funding brought “shock and awe” by the third wave earlier this year. His largely rural school district, located east of Reno, received $347,289 and $1.7 million during the first two allocations and is poised to inherit an additional $3.9 million from the American Rescue Plan Act.

“Shock — thinking about, ‘Holy cow, how are we going to spend this amount of money in this short period of time?’ combined with the excitement of, ‘Look what this means we can do that we would not be able to do otherwise,’” he said.

The federal windfall isn’t exactly like winning the lottery, though. The pandemic’s learning disruptions have caused backward academic slides and heightened mental health needs, the extent of which hasn’t been fully determined. School districts have fairly broad discretion to use the money to mitigate those issues as well as other challenges, such as technology connectivity and building air ventilation.

Another caveat: The funding isn’t recurring. It must be used by expiration dates tied to each round of funding. Those windows are generally two years, though school districts may be able to obtain a waiver for an additional year.

Still, it’s a historic investment in pre-K-12 education at what many view as a precarious time for students and educators. The challenge for school districts, experts say, will be crafting smart plans for how to use the money and then maintaining accountability for it.

“This is like an incredible moment for school districts,” said Marguerite Roza, director of the Edunomics Lab at Georgetown University. “It’s showtime. They’ve got to figure out how to step up and really bring their ‘A game’ to this moment.”

The Clark County School District, which is the fifth-largest in the nation, will receive the lion’s share of the federal funds in Nevada. The latest round of funding will inject more than $777 million into Southern Nevada schools, bringing its relief money up to $1.2 billion. For comparison, that’s roughly half the amount of revenue — $2.4 billion — in the district’s general operating fund this fiscal year.

“There will be time for community input into where we’re headed for the funding coming from the state and from the federal government,” he said. “I can tell you that this pandemic we have dealt with has really highlighted the inequities we have in (the) Clark County School District and in public education across the country.”

Some of those items already have been prioritized under the second round of federal funding. For instance, the district estimates it will spend $2.5 million on summer school over the next two years, though that number could fluctuate based on student enrollment. The district also plans to use $20 million to backfill state budget cuts to the class-size reduction program.

Washoe County Superintendent Kristen McNeill said the district’s summer school will be open to all students for approximately five hours on Tuesdays, Wednesdays and Thursdays. The experience will include meals, academic core content and enrichment activities such as virtual field trips, physical education, music and art. An online summer school program will be offered, too. The district expects about 25 percent of students to attend.

As the district gathers feedback and mulls other funding priorities, McNeill said leaders are keeping in mind the responsibility that comes with it — being good stewards of the money.

“There’s going to be an enormous amount of accountability as there should be on the use of these dollars,” she said. “And so I think as superintendents and districts and boards, we want to make sure that we’re very transparent, very open, about: ‘Where are these dollars going?’”

The Washoe County School District plans to do so through media briefings, regular board meeting updates and reports submitted to the Nevada Department of Education.

The Eureka County School District is the only district in Nevada that isn’t receiving any direct relief funding. That’s because none of its schools are eligible for Title I funding, which goes to buildings serving high percentages of children from low-income families.

In the White Pine County School District — where students have largely been attending school in person this academic year — the federal funds will help maintain college and career advising positions, counseling services and social workers, said Paul Johnson, the district’s chief financial officer. The district also plans to reinstate some specialist positions, such as physical education or music, at elementary schools.

Those positions were cut years ago during a budget deficit, Johnson said, so the stimulus money will help fund their return with the hope that state revenue will be in a better position two years from now.

“With the federal stimulus funds, we’re going to be able to buy a couple of years that we wouldn’t have had otherwise,” he said.

Jensen said the Humboldt County School District put $310,000 of early relief funding toward building a WiFi radius around schools that will allow students to access the internet at home from their district-issued devices. The pandemic, he said, highlighted the technology inequity that even in pre-COVID times hindered students’ abilities to do research or homework after school.

With the second and third rounds of federal funding, the Humboldt County School District plans to invest in instructional coaches who would work with small groups of students and help teachers improve their lesson plans, specifically for English language arts and mathematics, Jensen said. The district also wants to add a person who would direct strategies for social-emotional and mental health at school sites; several teachers, an aide and a coach to help students learning English as a second language; an interventionist to help junior high students transition to high school; and a director charged with overseeing the federally funded programs and tracking associated data.

The district hopes to receive a waiver that would allow the federal funds to be used through an additional year.

“It’s going to be very difficult for districts to expend this level of federal funding in such a compressed time frame and to be able to demonstrate long-term impact and benefit,” Jensen said.

Roza, the director of the Edunomics Lab at Georgetown University, said she expects to see a wide array of uses for the federal money. School districts that operated remotely longer may have very different needs than those that resumed in-person instruction relatively early.

Even so, she cautions against uses that could pose trouble when the funding expires. It’s a fiscal-cliff situation. Two years down the line, will districts be able to afford those pay raises or those extra positions they have created?

“Really try to focus on what your kids need and what you think — what kinds of services and so on — will  get you closer to your goals,” she said, stressing the importance of targeted funding initiatives. “So if you’re worried kids did not learn how to read in the early grades, focus on reading.”

On the accountability side, Roza encouraged school districts to track their expenditures from a per-pupil standpoint. For instance, if a district launches an orientation program intended to help students socially, track how many participated, the cost per student and whether the outcomes matched the goals.

“I think we’ll have a lot of examples of things that worked and didn’t work probably,” she said.

In some ways, the federal funding is offering districts a once-in-lifetime opportunity to experiment with academic programs and interventions they may have wanted all along but couldn’t afford. The successes that emerge, Jensen said, could help Nevada educators make their case for long-desired state funding increases.

Nevada is in the midst of implementing a new K-12 funding formula, but so far, state lawmakers have been reluctant to significantly boost education investments. The state’s per-pupil spending trails the national average by several thousand dollars.

“We now have some time to generate data to prove that additional revenues in Nevada, if used strategically and appropriately, can make a difference,” he said.

Could a similar phenomenon occur at the federal level?

While states and local governments primarily fund K-12 education, these landmark relief packages could set the stage for more federal funding moving forward — albeit not at this high of a level, Roza said. The federal government may not want to yank this much money from school districts in one fell swoop.

It’s too soon to say what will happen, but President Joe Biden’s proposed $1.5 trillion federal spending plan provides a hint: It calls for doubling the amount of Title I funding for schools.