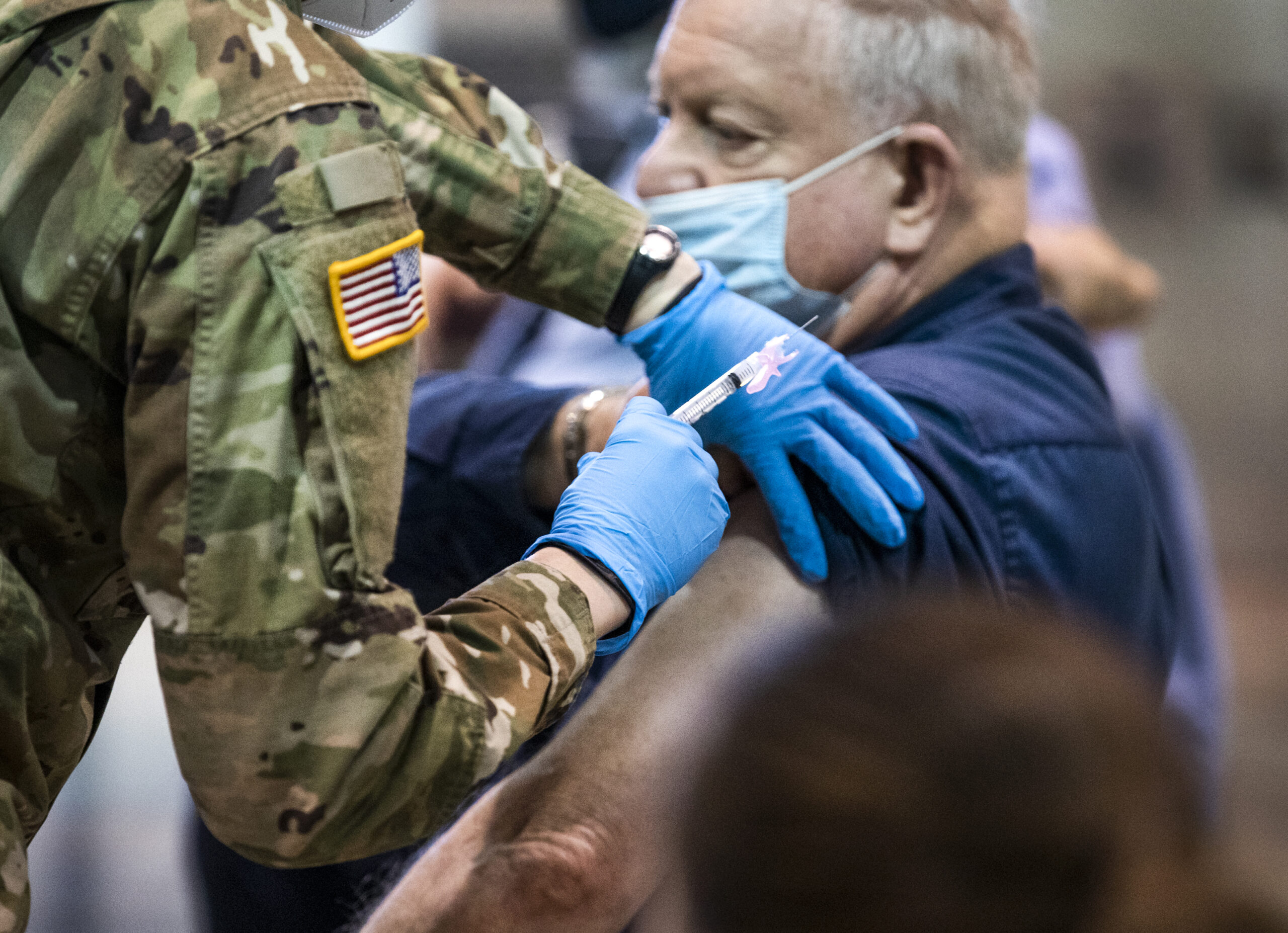 Gov. Steve Sisolak has announced a new initiative to address what he described as alarming disparities in the rate at which working class families, lower income households and communities of color are receiving the vaccine in Clark County.

Under the new initiative, state officials will work with Clark County Emergency Management and the Southern Nevada Health District on the vaccination process in order to clarify the state’s prioritization lanes, ensure “fair access” to vaccines through the selection of vaccination sites and overall “equitable allocation” of the vaccine across the county. Updates on the initiative’s progress will be provided at weekly COVID-19 Mitigation and Management Task Force meetings.

Earlier this week, Southern Nevada Health District officials announced that 40 percent of people who have received the vaccine in Clark County are white, 11 percent are Asian, 10 percent are Hispanic, 4 percent are Black or African American, 16 percent are other and 16 percent are unknown.

In Clark County, 29 percent of the population is white, 31 percent is Hispanic or Latino, 12 percent are Black or African American, 11 percent are Asian American and Pacific Islander, according to the U.S. Census Bureau.

Sisolak, in a video address posted to YouTube Friday morning, said that those numbers, as well as additional data sent to the governor’s office, show that Clark County is experiencing an “equity crisis” with regard to vaccine distribution.

“It must stop. As a former Clark County commissioner, I know these ZIP codes well. I am alarmed at what I am seeing,” Sisolak said. “What the data shows is clear. There's a disparity and who is receiving the vaccine that does not reflect the demographics of that region.”

Data obtained by The Nevada Independent show that the ZIP code with the highest number of vaccinations in Clark County is 89052, which includes the affluent retirement community of Sun City Anthem in Henderson. The ZIP code with the second-highest number of vaccinations is 89074 is Green Valley, also in Henderson, followed by 89117, which includes Peccole Ranch and the Lakes, near Summerlin.

The communities with the fewest number of vaccinated residents, by contrast, are largely concentrated in East Las Vegas, the working class neighborhood where a significant portion of Las Vegas’s Hispanic population lives. Those ZIP codes have also experienced some of the highest numbers of COVID-19 cases throughout the pandemic.

Southern Nevada Health District spokeswoman Jennifer Sizemore said in an email Friday morning that the district has been working closely with its state and local partners to distribute vaccines “as equitably as possible and in keeping with the State’s Vaccine Playbook.” She said the health district has been working to “refine” its vaccine distribution strategies as it receives more data and demographic information about who is receiving the vaccine.

“We are working hard to ensure every person 70 years of age and older who wants the vaccine is able to get it before expanding to other groups,” Sizemore said. “We share the Governor’s concern, and our pleased to hear that he wants the available vaccine supply directed to those who need it the most and will work with us to address the current inequities.”

Explore the graphic below to compare numbers of vaccines administered and COVID-19 cases by ZIP code:

Dr. Fermin Leguen, chief health officer for the Southern Nevada Health District, in an interview Friday afternoon called the assertion that the health district is ignoring disadvantaged communities “very unfair,” noting that the health district has collaborated with community members, including representatives of both the Hispanic and African American communities, on its vaccination plan.

But he acknowledged that it is “not good enough” just to put a vaccination center in the middle of a low-income area, as was the case when the city of Las Vegas and the health district recently set up a site at Doolittle Community Center in the Historic Westside.

“It still doesn’t guarantee that people who live in that area have the full access to be vaccinated at that site,” Leguen said, adding that the federal government does not allow vaccinations to be restricted based on residence.

Instead, the health district plans to send smaller strike teams into some of the most underserved ZIP codes and offer the vaccine directly to residents. Leguen first announced this plan during a press call earlier this week.

“That will facilitate that most of the vaccines offered at those sites are actually administered to people who live in those sites and people who have the limitation,” Leguen said.

He added that the biggest issue contributing to the inequality of vaccine distribution is supply. State officials have been asking the federal government how vaccines are allocated to states since it came to light that Nevada is receiving the second fewest doses per capita of any state.

Data obtained by the Independent also show that health care workers make up most of Clark County’s vaccinated population, at 41.5 percent, followed by seniors 70 and older, at 30.5 percent. Public safety and security workers make up another 7.7 percent, followed by frontline community support at 1.9 percent and frontline supply chain and logistics — a group that Clark County has not yet announced is eligible for vaccination — at 0.01 percent. Another 18.4 percent of vaccinated individuals fall into an unknown category.

Leguen noted that the fact that health care workers represent more than 40 percent of Clark County’s vaccinated population may be contributing to the ZIP code inequality. He said he didn’t have the ZIP code data of where health care workers live in front of him, but that he would bet they don’t live in the most economically depressed portions of town.

The new state initiative also plans to focus on reports of Nevada’s COVID-19 Vaccination Playbook not being followed in Clark County and how that may be contributing to an “unfair allocation of vaccines, confusion among the public, and access to vaccines by ineligible groups or individuals,” according to the governor’s office.

Leguen rebuffed the state’s assertion that the health district isn’t following the vaccine playbook but did acknowledge the difficulty of ensuring that only true frontline workers within each industry group are receiving the vaccine.

There is, for instance, no way for someone at a mass vaccination site to determine whether the government employee they’re vaccinating has been working from home for months and has no interactions with the public or whether they work every day in a public-facing setting. The only way to do that, he said, would be to host employer-sponsored vaccination opportunities where the employers could determine which employees are truly eligible.

It is still unclear how exactly nearly 50 percent of the city of Las Vegas’s employees have already gotten vaccinated — though city employees generally are eligible for vaccination under the continuity of governance priority group — since vaccines are still supposed to be reserved for true frontline workers. A city of Las Vegas spokesman didn’t immediately respond to a request for comment Friday afternoon.

Leguen said the health district partners with local jurisdictions to distribute vaccines — such as in the case of the Doolittle site — though he wasn’t sure whether city employees were vaccinated through a city of Las Vegas vaccination clinic or through one of the other vaccination sites across Southern Nevada. However, he said that if the city did run their own clinic, they should only be vaccinating eligible staff.

“They have to make the decision if an employee really should be vaccinated or not based on the level of exposure that they have,” Leguen said.

The new effort can also be directed to focus on equity and fairness issues in vaccine distribution in other parts of the state, too, should those arise.

“We'll continue to work to try to make sure that we have vaccine available as it's available dispensed equitably in our communities,” Washoe County District Health Officer Kevin Dick said on a press call on Wednesday.