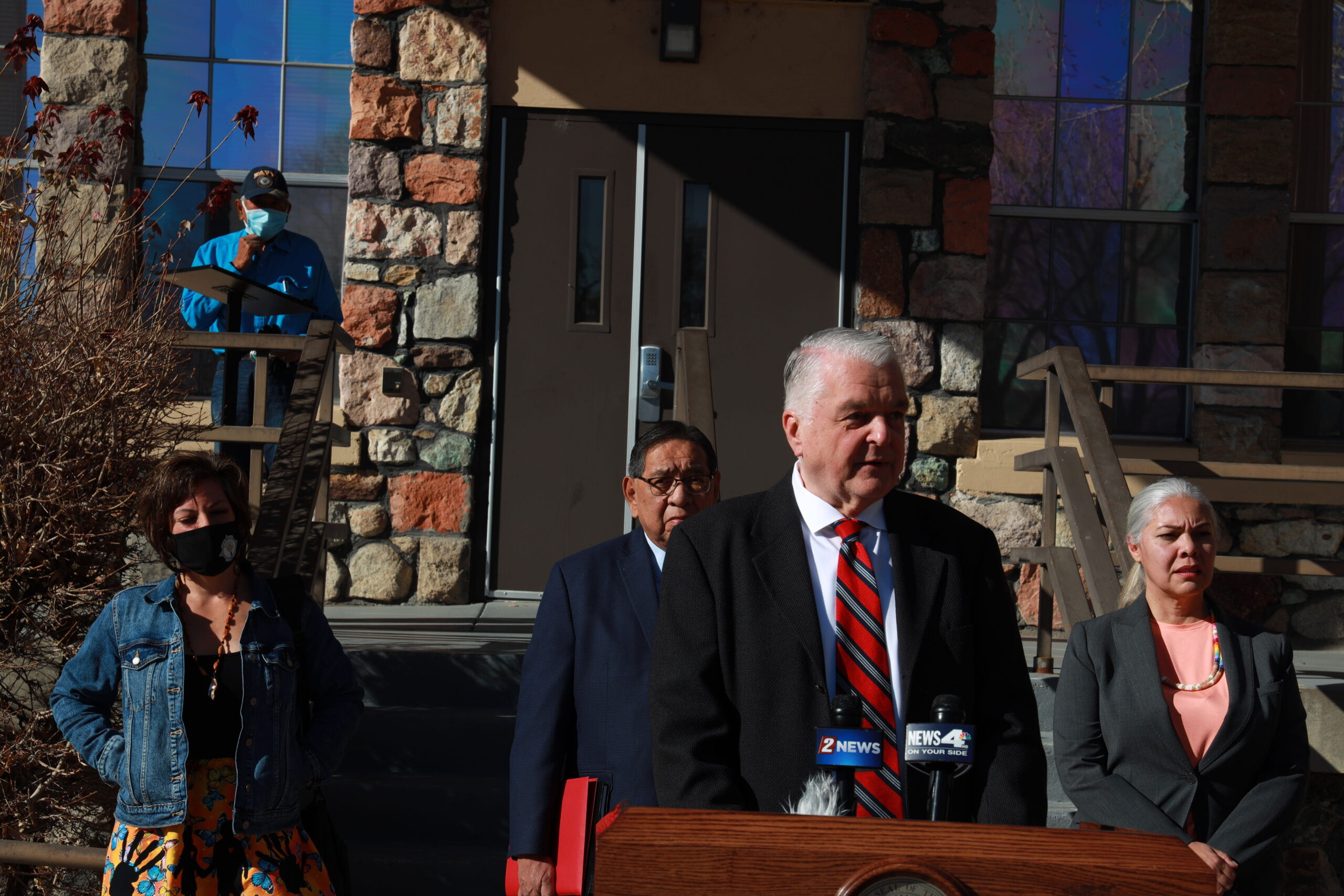 Gov. Steve Sisolak on Friday promised full commitment and support from the state as tribal leaders work with the Nevada Indian Commission to research and collect information for the Federal Indian Boarding School Initiative, a comprehensive review of the legacy of federal boarding school policies.

The announcement came after Sisiolak spent the morning meeting with leaders from Nevada tribes at the Stewart Indian School in Carson City. A representative from the Department of Interior also attended the meeting virtually.

“When the federal government established a policy to ‘kill the Indian to save the man’ that resulted in the boarding schools, it was the state of Nevada that sold the bonds to fund this school,” Sisolak told reporters following the meeting. “And it is the state that now manages much of this land. It is on behalf of the state that I want to make an apology. This policy was abhorrent and we need to make amends now.”

The federal investigation called by the Department of Interior entails identifying boarding schools and their sites and the location of known and possible burial sites on or near school premises. The final step will be using historical documents to determine the identities and tribal affiliations of children buried at the sites.

Sisolak said it’s a priority for him and the state to acknowledge what happened at the Stewart School and provide the information needed for the boarding school initiative to provide closure for tribes and their members.

Interior Secretary Deb Haaland, who is an enrolled member of the Pueblo of Laguna and the first Native American to serve as a cabinet secretary, announced in June the launch of the federal investigation into more than 350 boarding schools across the country from the late 1880s through the early 1990s. The initiative came weeks after the discovery of more than 200 human remains discovered on the grounds of a boarding school run by the Catholic Church in Canada.

The purpose of the investigation, according to Haaland’s secretarial memo, is to bring healing to Native Americans who carry trauma because they or their family members attended a boarding school.

As far as investigating the Stewart Indian School campus for human remains, Sisolak said tribes are taking the lead on determining whether to search for remains or leave them as they are. The Washoe Tribe of Nevada and California owns the land at the site of the cemetery on the Stewart School campus, but other portions are owned by the state. The entirety of the campus, however, rests on the ancestral homeland of the Washoe.

Arlan Melendez, chairman of the Reno-Sparks Indian Colony, said he thinks most tribal leaders would rather not disturb the remains on the campus, unless there’s an absolute need to move them, which would require consultation with tribal leaders.

A final report from Haaland is expected to be completed by April 1.

Tribal members in Nevada and across the U.S. recall the harsh realities of boarding schools, which were designed to assimilate young Native Americans by cutting them off from their families and culture through prohibiting their Indigenous languages, spiritual and ceremonial traditions and cutting their hair.

Young tribal members often worked on the grounds of boarding schools and many recall suffering abuse, with an unclear number of children dying at the school, often buried in unmarked graves.

Stacey Montooth, an enrolled member of the Walker River Paiute Tribe and executive director of the Nevada Indian Commission, said there were at least 20,000 students who attended the Stewart School in its 90 years of operation in Nevada and that they came from tribes as far as Arizona, California, Utah, Washington and Oregon.

“The loss of those who did not return left an enduring need in their families for answers that, in many cases, were never provided,” Haaland wrote in the initiative memo. “Distance, time, and the scattering of school records have made it more difficult, if not impossible, for their families to locate a loved one’s final resting place and bring closure through the appropriate ceremonies.”

Montooth said the Nevada Indian Commission has been gathering information regarding the Stewart School for years, but there are many gaps in the recordkeeping.

“When this institution was closed in 1980, the federal government had no transition plan. They basically changed the locks and took all the records with them,” she said. “So we don’t have even student attendance information.”

Tribal members and leaders emphasized that their communities are still dealing with the reverberations of the trauma caused by the federal boarding schools.

“The intergenerational trauma that occurred because of this campus still resonates today,” Montooth said. “Native American students are not as successful in public high schools as they should be. Unemployment rates on our tribal reservations are outrageous. Mental health issues are absolutely abundant, everything from addiction, alcoholism, poor choices — it all is a part of the everyday life of American Indians because the federal government forcefully assimilated our people.”

Despite forced assimilation and the traumatic legacy of the federal boarding schools, Montooth reminded leaders that Indigenous communities survived and are blazing new trails.

“The intent was to absolutely remove all aspects of Native American culture,” Montooth said. “But I'm still here. We have amazing elders that are telling their stories firsthand, authentic accounts, and we have amazing tribal officials, elected citizens of our tribal nations for setting policy and changing the trends.”

As the boarding school initiative moves forward, Torres said a lingering concern is that the state is leaning on the federal government for the process.

“Sometimes, that's not always the best case,” she said. “So my thing is, think outside that box, think of what we're going to do. I don't want to sit and wait for 20 years for the federal government to move and get things done. What are we going to do now? How do we prepare for the future?”

Torres, who acknowledged appreciation for Sisolak’s support, also said she is going to “hold his feet to the fire.”

“When you make commitments to me, I’m going to make sure that you follow through with them,” she said.

As for the tribes, part of the healing process involves reviving their once-prohibited cultural traditions, preserving Indigenous languages and ensuring the participation of the younger generations.

“Many of our elders aren't around anymore. We’re losing so many,” Melendez said. “They're trying to fill the gap with whoever's left, and that's not a lot of speakers.”

Even though the pandemic halted many in-person celebrations and ceremonies for tribes, Melendez said programs that promote learning traditional dances or Indigenous languages are inspiring younger generations and providing a spirit of hope.

Torres said the state can support tribes in these efforts.

“I want to make sure that the state funds what they can as far as language immersion classes, curriculum changes, and again, not just incorporate them and offer it — mandate it,” Torres said.  “So that people know exactly who we are, why we are and what we're about and include tribal nations and our people at the table so that we can tell the story.”