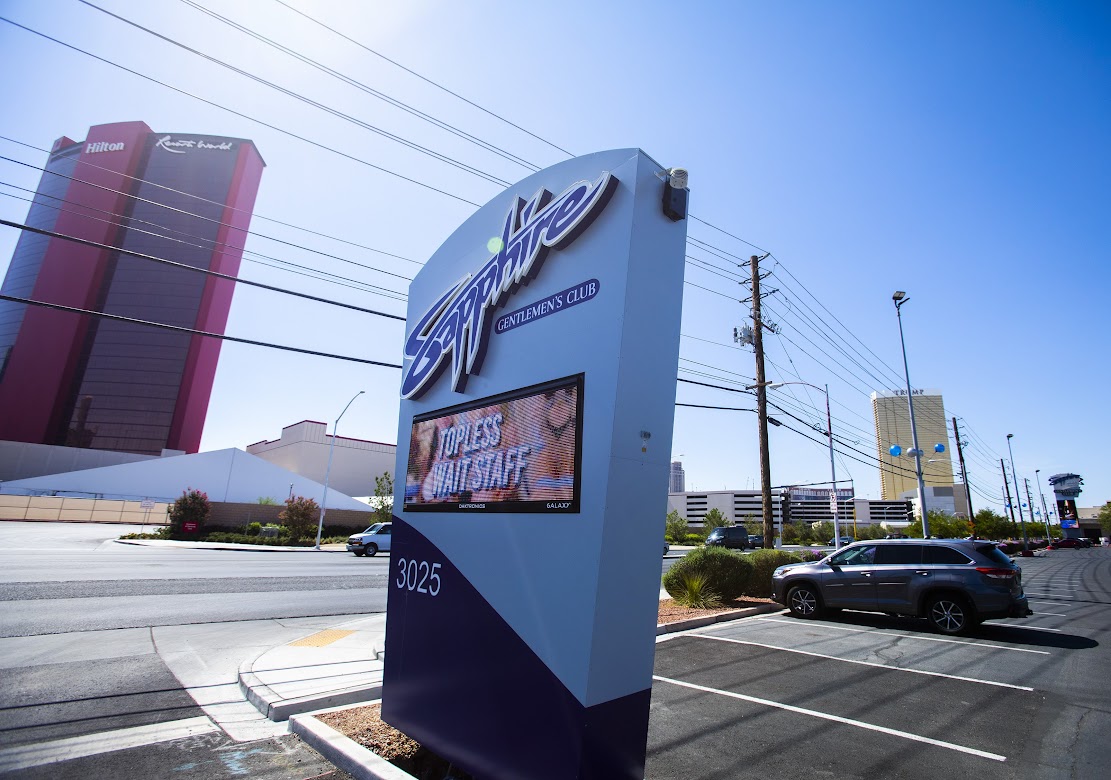 Adding a dozen bar-top slot machines to a tavern is rarely an issue in Clark County.

However, placing gaming devices inside Sapphire, Las Vegas’ largest adult nightclub and topless lounge, is raising concerns for at least one Clark County commissioner and the president of the Nevada Resort Association.

The Clark County Commission last week voted to have its Business License Department conduct a study over the next 60 days for Sapphire’s request to dedicate 1,000 square feet of a proposed tavern within the club for 12 gaming devices.

“This would be a very small area inside the venue, and that portion would also be separate from the adult (area),” Las Vegas attorney David Brown, who represents Sapphire, told the commission on Aug. 2. “If you were sitting there at the gaming portion, you would not be looking at the dancers and there would be no adult entertainment in that room. It would be sectioned off. It would be a separate area.”

Resort Association President Virginia Valentine, however, wondered whether a study was actually necessary.

Clark County has an ordinance that allows commissioners to reject a gaming license for any location within a 250-foot radius of an adult-oriented business — presumed to be unsuitable for gaming under county regulations.

Valentine suggested to the commission that licensing Sapphire for a dozen slot machines could have “unintended consequences.” Sapphire’s location is on Sammy Davis Jr. Drive, across from entrances to Resorts World Las Vegas. It is also a neighbor to Thrive Cannabis Marketplace, a dispensary that has applied for a marijuana consumption license.

The area is considered part of the Las Vegas resort corridor.

“I would suggest that this is premature to consider adding another entitlement in this location until you know how the previously approved entitlements are going to perform,” Valentine said.

She also wondered if allowing Sapphires to have slot machines would “set a precedent” for licensing gaming at similar venues throughout the Las Vegas Valley.

Clark County has two adult businesses licensed by the Gaming Control Board to offer up to 15 slot machines – Play it Again Sam on Spring Mountain Road and Club Platinum on East Flamingo Road.

“Before COVID, they had approximately 500,000 visitors a year, but now they're down to my understanding of about 25 percent,” Brown said, adding that Sapphire’s tavern plans had already been approved.

“They're asking you to have the ability to have gaming machines, just like hundreds of other taverns in Clark County,” Brown said.

The El Dorado Mexican Cantina is attached to Sapphire but has a separate entrance. The restaurant is not licensed for gaming.

Century Gaming General Manager Tim Cogswell confirmed the company has been contracted as the slot machine route operator for Sapphire, having come to an agreement more than a year ago.

“We have been standing in the wings as they go through this process to hopefully have gaming in the future,” he said.

Location was once an athletic club

The basketball court was an unofficial training ground for UNLV’s basketball team, with the Running Rebels often spotted in pickup games with middle-aged fans.

As newer athletic facilities owned by national chains populated the Southern Nevada community in the 1990s, business at the Sporting House dried up and the facility closed.

Downtown strip club owner Pete Eliades bought the building in 1999 for $14 million in order to convert it to a strip club. But Clark County objected when his request came two days after the commission adopted an ordinance requiring adult entertainment facilities to be at least 1,500 feet apart.

The county rejected the application and club owners sued. District Court Judge Valorie Vega ruled in 2001 the Sporting House should be grandfathered in because the new county law went into effect after the request was filed.

The club finally opened in 2003 with several stages, 10 luxury skyboxes and three lounges. An ownership dispute led to the club being sold at auction to one of the former owners for $80 million in 2006.

The resort association protested Sapphire’s plan in 2011 to add a $4 million resort pool and day club to the location, saying the facility was adding amenities only allowed at hotel-casino properties. The county unanimously approved the plans and the facility opened in 2013.

Clark County Commission Chairman Jim Gibson said last week the burden was on Sapphire to show why gaming inside the 250-foot separation was a suitable use of the space. Ultimately, he said, Nevada gaming regulators would decide a location’s suitability. His son, Brin Gibson, is the control board’s chairman.

“The ordinance clearly says it’s unsuitable unless the board determines after a hearing that public health, safety and welfare will not be impaired by granting a license. My hope is that as we look at all of that,” Jim Gibson said. “This feels to me like it creates the potential for a collision between enforcing agencies.”